In 2020, Iran’s economy faced two overarching challenges – U.S. economic sanctions and the COVID-19 pandemic. The Trump administration further ratcheted up sanctions as part of its “maximum pressure” campaign initiated in 2018. At the same time, COVID-19, first reported in Iran in February, created new problems and exacerbated existing ones.

What types of sanctions did the United States impose against Iran in 2020, and how did these sanctions affect Iran’s economy?

The U.S. sanctions imposed in 2018 and 2019 did more significant damage to the Iranian economy than any single American action in 2020. The general theme of U.S. sanctions in 2020 was enforcement, not expansion. U.S. sanctions cover most of its export sectors, leaving few meaningful additional sectors for the United States to target. The Trump administration instead imposed sanctions on government officials, companies, ships, and even sea captains that allegedly violated existing U.S. sanctions. These included networks of companies in the United Arab Emirates (UAE) and China that allegedly facilitated Iranian petroleum exports. But it is not clear whether these designations actually disrupted or discouraged the activities of sanctions violators, given that they presumably had accepted the risk of U.S. sanctions. 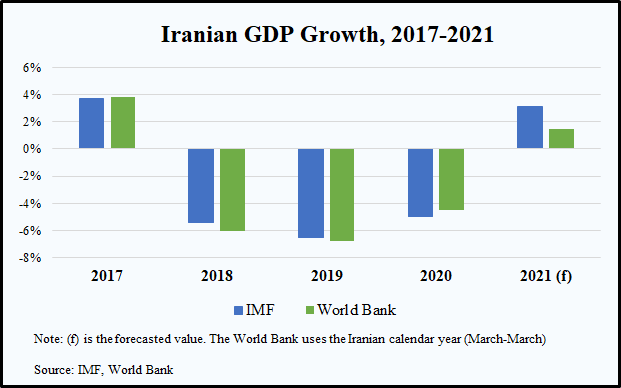 An exception to this trend was the U.S. designation in October of the entirety of the Iranian financial sector and 18 banks. These sanctions, against banks that handled humanitarian trade, triggered concerns that Iran might not be able to access medicine and food during a pandemic.

The Trump administration imposed many other sanctions against Iran in 2020 that did not have a strictly economic focus, such as designations of government ministers, ambassadors, and individuals and companies involved in Iran’s nuclear, missile, and cyber programs. Some sanctions, such as terrorism sanctions in October, appeared primarily aimed at making U.S. diplomacy with Iran more difficult in the future.

Iran has resisted imposing the strict lockdowns witnessed in Western Europe or Asia, primarily because of economic constraints. Forbidding people from working meant the government would have to provide alternative and significant economic support, and Iran was unable and unwilling to do so. U.S. sanctions played a major role, as did other spending priorities, including on its military. In the 10 months after the outbreak was reported in February, the government announced additional spending, mostly funding cheap loans, that accounted for about seven percent of GDP, according to the IMF. The government also allowed citizens to defer tax payments.

While these measures may have prevented worse economic outcomes, they did not provide the government enough leeway to take more aggressive lockdown measures, especially early in the pandemic. Unlike other developing countries, Iran could not draw on emergency support from international financial institutions, and international debt markets were off-limits.

The pandemic’s damage rippled across the economy. The pandemic had the most significant impact on the non-oil sector – agriculture, manufacturing, and services – which has powered much of the economy since U.S. sanctions curtailed Iran’s oil exports. By mid-year, 1.5 million people had lost their jobs. As the rial weakened, consumer prices continued to increase. The monthly inflation rate reached seven percent in October, the highest level in two years.

How much non-oil trade has Iran conducted this year? How did the pandemic affect this trade?

In the first eight months of the Persian year (March 20 to November 20), Iran exported $21.5 billion in goods and imported $23.1 billion—a 20 percent reduction in overall trade compared to the same period last year. With greater imports than exports, Iran amassed a non-oil trade deficit of $1.6 billion, compared with $1.3 billion last year. 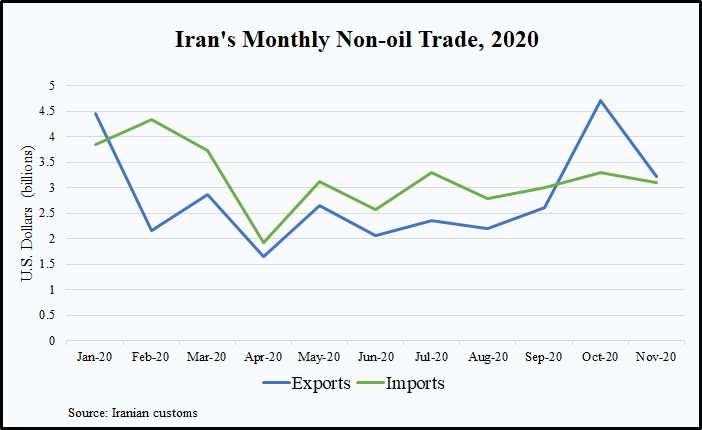 In addition to the accumulated effect of U.S. trade and financial sanctions, the COVID-19 pandemic significantly depressed non-oil trade in 2020. In the spring, Iraq, Turkey, Afghanistan, and other neighbors closed their borders with Iran, immediately severing key economic routes, and those countries suffered their own economic downturns. Exports, which averaged $3.45 billion per month in the previous year, fell to just $1.65 billion in April. Trade picked up again in late 2020 as Iran’s neighbors opened their borders.

Iran’s non-oil trade is heavily concentrated in a few countries, mostly neighbors, and China. Beijing accounted for 25 percent of Iran’s total non-oil trade in the first eight months of the year, making it Iran’s biggest trade partner by far. Yet China’s non-oil trade with Iran has fallen compared to 2019. Iran-China trade is likely to total up to $18 billion in 2020-21 if current trends continue, compared to more than $20 billion in 2019. The decline in non-oil trade with China is likely due in part to the fall in Iranian oil exports, which helped Iran finance its imports. Aside from China, Iraq, the UAE, Afghanistan and Turkey are major trade partners. Iran also imports a smaller amount of goods from India and Germany.

How much oil did Iran sell in 2020, and how does that compare to its initial expectations? How did the fluctuation of oil prices this year affect Iran’s bottom line?

In its 2020-21 budget, Iran planned to export 1 million barrels of oil per day at a price of $50 per barrel – for a total of some $18 billion. The Islamic Republic underperformed on both counts. Just days before the Iranian year began in March 2020, global oil prices tumbled as the coronavirus spread globally. From March until December, Brent oil averaged $39 per barrel—down from the 2019 average of $64 per barrel. Iran’s heavy crude traded at a few dollars below the international benchmark, and Tehran offered its clients an additional discount, given the risks from U.S. sanctions. So Tehran got nowhere near the $50 per barrel that it had planned.

Estimates vary about how much oil Iran exported on a daily basis in 2020. Some analysts posit less than 500,000 barrels per day (bpd), and others argue that exports exceeded 1 million bpd, especially in the late 2020. A senior Iranian budget official said the country exported as much as 700,000 bpd, although this number was subsequently refuted. The lower estimates are more consistent with reports that Iran will net less than $5 billion in oil revenue this year—down from $53 billion in 2017.

Iran was somewhat insulated from the volatility in oil prices in the spring, since only nine percent of its budget in 2020 was dependent on oil revenue. Yet the scarcity of foreign exchange meant that every dollar lost had disproportionate importance. Prices rebounded in late 2020, easing some of the immediate pressure.

What happened to the value of Iran’s currency in 2020? And what impact did it have on the government and the public?

The Iranian rial depreciated 49 percent against the dollar in 2020, as of mid-December. The rial reached its weakest-recorded value – 322,000 rials against the dollar – in October. Combined with inflation of about 30 percent, the rial’s weakness and volatility drove Iranians to find other places to store their money, such as in property, gold, stocks, or foreign exchange, in turn driving up prices in those sectors as well. 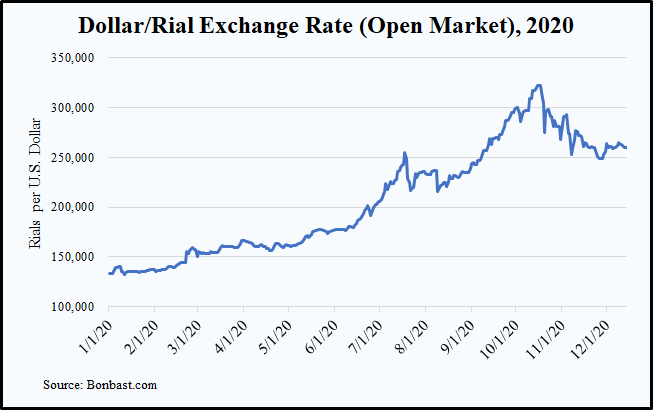 The government took two notable steps to try to stabilize the rial and increase the amount of dollars in the economy. First, it intensified efforts to force exporters to repatriate dollars, threatening to take legal action against uncooperative businesses. Some exporters have been unwilling to bring dollars home because they must sell the dollars at a cheaper rate as part of the government’s foreign exchange transaction system. Government pressure helped to boost the rial, especially over the summer, but the effect was not long lasting. Second, in late 2020, the Iranian Central Bank began injecting $50 million a day into the economy to boost the rial. The cash injection, combined with optimism about the end of Donald Trump’s presidency and his maximum pressure campaign, strengthened the rial. By mid-December, the rial had stabilized to around 260,000 rials per dollar.

On December 2, President Hassan Rouhani’s government presented a draft budget for 2021 of almost $34 billion to parliament. What does it include and how does it compare to the 2020 budget?

As with the 2020 budget, the government’s plan for next year is quite optimistic. The budget is 10 percent larger than in 2020 (in inflation-adjusted terms), and it contains rosy assumptions about oil exports, tax revenues, and privatization and bond issues. The government plans to use the increased revenue to raise spending on salaries, subsidies, and social welfare programs.

Iran’s expectations for energy revenue are eye-popping. Iran plans to earn 170 percent more oil revenue in 2021 than in 2020 (in inflation-adjusted terms), constituting 21 percent of government revenue, as opposed to 9 percent in 2020. (This includes condensate and natural gas, which make up a small proportion of overall energy exports). Rouhani said the government aims to sell 2.3 million bpd day of oil in 2021 at $40 per barrel, a target that includes both physical exports and the equivalent in oil-backed bonds offered on the domestic market. The price is conservative — Brent oil is currently trading at $50 per barrel — but the volume is not. Absent rapid sanctions relief from the incoming Biden administration, Iran will have a very challenging time meeting this target.

Iran elected a new parliament in February that is more conservative. What obstacles might Rouhani, a centrist who will leave office in August 2021, face, in particular as it pertains to economic policy?

The relationship between Rouhani and the new parliament deteriorated significantly in November and December 2020. The parliament advanced legislation related to cash subsidies and the nuclear program despite objections from the government. In 2021, the parliament will probably take a similarly aggressive stance toward the budget, particularly over increasing military and social spending. Iran’s various factions differ on economic policy, ranging from neo-liberal and internationally oriented officials (such as Rouhani) to the populist faction (defined by Mahmoud Ahmadinejad’s presidency). But the latest clashes between the president and parliament are more about political power than economic philosophy, with the parliament trying to flex its muscle as Rouhani finishes his second and final term in office.