The U.S. Institute of Peace interviewed Dr. Kenneth Katzman, a former CIA analyst, who is now an Iran expert at the Congressional Research Service. His responses are made in his personal capacity, not for the Library of Congress.

Why is sanctions relief so important to Iran and which sanctions does it want lifted the most?

The United States has imposed layers of sanctions on Iran—reportedly designating approximately 1,600 individuals and entities under the Trump administration alone—for four reasons:

Some individuals and institutions have been sanctioned for more than one reason, which might complicate how and under what conditions to lift them. 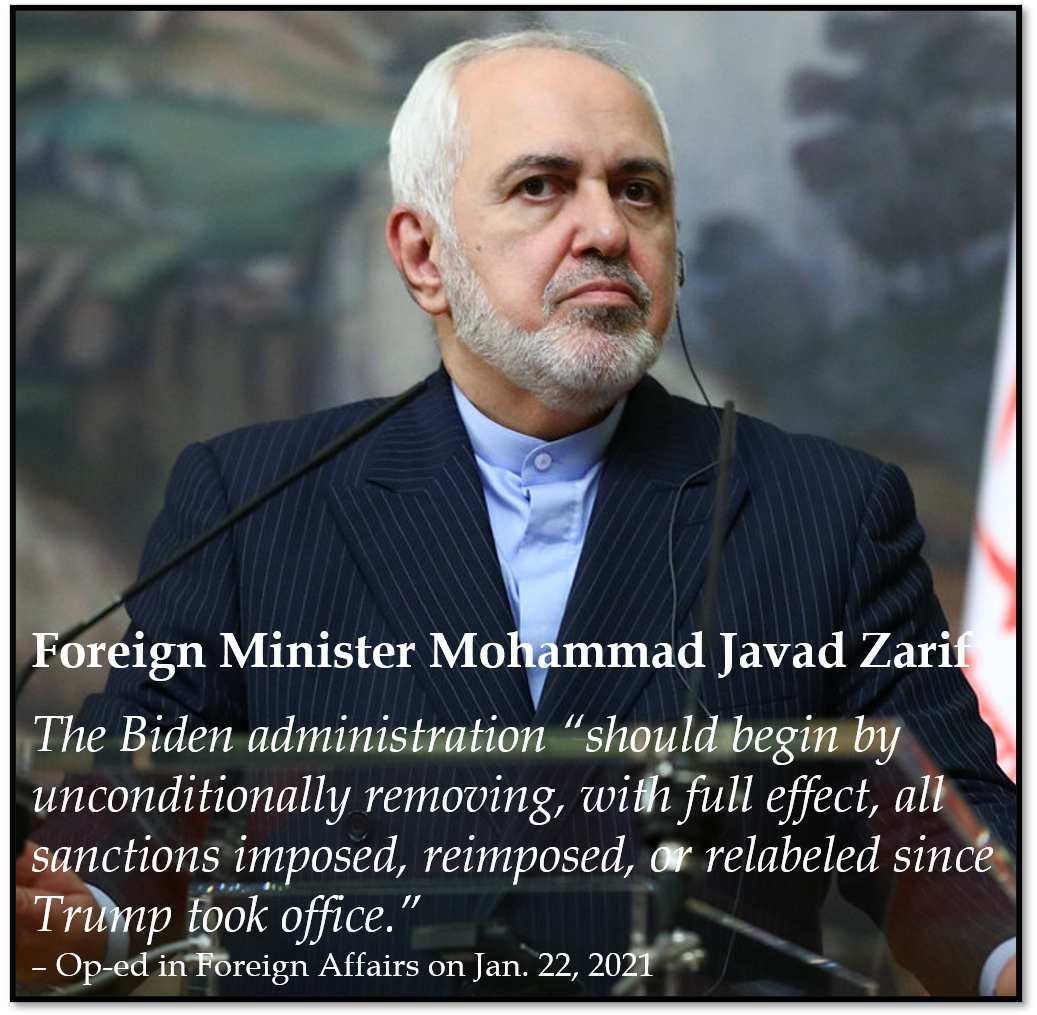 Iran has insisted that all economic sanctions imposed or reimposed since 2018 by the Trump administration, as part of its “maximum pressure” campaign, must be removed before Tehran will fully comply with the 2015 nuclear deal, known as the Joint Comprehensive Plan of Action. But relief from some sanctions—notably on oil exports—is more urgent to Iran than other sanctions. Tehran has specifically demanded sanctions relief for its banking and oil sectors. Key entities include the Central Bank of Iran, the Ministry of Petroleum, the National Iranian Oil Company and the National Iranian Tanker Company. The Trump administration sanctioned those four entities under terrorism designations. All, except the Ministry of Petroleum, were sanctioned by the Obama administration – although as proliferation entities, not terrorism entities - to pressure Iran to comply with international nuclear obligations.

Iran wants most of all to freely sell its oil and get paid in hard currency again. In 2018, President Trump reimposed sanctions on companies or traders buying or transporting Iranian oil. From 2018 to 2020, his administration went further and imposed sanctions on all major Iranian banks as well as foreign banks for doing business with them; Iran was basically cut off from using the international financial system. In early 2021, Iran’s Central Bank reportedly had more than $100 billion in various accounts abroad that it can’t access due to U.S. sanctions. Since the outbreak of COVID-19 pandemic, Iran has appealed to use those frozen funds, most recently stuck in Japan and South Korea, to buy humanitarian goods.

The Biden administration could lift sanctions en masse with one executive order that revokes all prior orders. In January 2016, when the JCPOA was formally implemented, President Barack Obama issued one executive order that revoked several previous executive orders that had sanctioned various sectors of the Iranian economy. The Treasury Department’s Office of Foreign Asset Controls delisted all relevant entities in one grand data dump. But other executive orders — including those that sanction the sale of advanced technology to Iran, on terrorism, and on Iran’s human rights abuses — were left in place. Only sanctions specific to Iran’s civilian economy were lifted.

What effect have the Trump-era sanctions had on Iran’s economy?

I would argue that the sanctions have not seriously impacted the government’s ability to conduct its affairs. But there is a clear consensus that sanctions significantly weakened Iran’s economy. They caused Iran’s Gross Domestic Product (GDP) to shrink and inflation to rise, as follows:

The value of the rial against the dollar also dropped dramatically after the U.S. reimposed sanctions in 2018. The dollar traded for 64,500 rials on the free market on May 7, 2018, the day before the U.S. withdrawal from the nuclear deal. By October 2020, the dollar was trading for as much as 315,000 rials, a historic low for Iran’s currency. The rial’s price subsequently stabilized but did not recover its value from the period before sanctions were reimposed.

For all its problems, Iran’s economy was not in danger of collapsing as of early 2021. In the budget for March 2020 to March 2021, Iran had basically assumed that it would export almost no oil. But sanctions forced Iran to further diversify its economy. It has a highly developed auto industry. It exports steel, minerals, wood, construction materials, and more. It is now more of a light manufacturing economy than a purely oil-based economy. In January 2021, the International Monetary Fund forecast that Iran’s GDP would grow by three percent over the next year.

What impact have sanctions had on Iran’s nuclear and missile programs?

U.S. sanctions have not slowed development of Iran’s nuclear or missile programs, which are inimical to U.S. interests.

Nuclear: Between June 2019 and November 2020, Iran’s stockpile of enriched uranium increased to more than 12 times the limit set by the 2015 nuclear deal. Iran has installed advanced centrifuges to enrich uranium faster. In January 2021, it started enriching uranium to 20 percent, well beyond the deal’s limit of 3.67 percent. Iran has reportedly not made the political decision to try to manufacture and test a bomb, but 20 percent-enriched uranium is a technical step closer to weapons-grade purity, which is 90 percent or higher.

Missiles: Sanctions have also not significantly curtailed Tehran’s ability to develop, test or deploy missiles—or its shipments of missiles to proxies across the region, such as the Houthis in Yemen. In September 2019, it attacked two Saudi Arabian oil facilities using cruise missiles and explosive-laden drones and temporarily disrupted about half of Saudi Arab’s total crude oil output. In January 2020, the IRGC fired more than a dozen ballistic missiles at two Iraqi bases housing U.S. soldiers. More than 100 U.S. service members were diagnosed with traumatic brain injuries.

What impact have sanctions had on Iran’s government?

But these sanctions are mainly symbolic because the sanctioned Iranian officials are not believed to have foreign bank accounts or property and other assets abroad. Sanctions on the supreme leader’s office and foundations (bonyads) connected to him were also mainly symbolic. For example, the Treasury Department sanctioned Bonyad Mostazafan—or the Foundation of the Oppressed—as well as 10 men and 51 companies controlled or owned by the foundation that were involved in the energy, finance or mining sectors. But these kinds of companies operate using Iranian currency and don’t have holdings abroad. The foundation’s factories have not shut down, and the charities have continued to administer aid.

Sanctions, however, may have impacted Iranian domestic politics by inadvertently helping hardliners make a comeback. Hardliners had lost a string of elections between 2013 and 2017. In 2013, Hassan Rouhani, a centrist with reformist supporters, won the presidency. In 2016, Rouhani’s allies won a majority in Parliament. In 2017, Rouhani was reelected to the presidency.

But hardliners capitalized on public anger and frustration after the Trump administration withdrew in 2018 from the JCPOA, which was Rouhani’s chief foreign policy accomplishment and an integral part of his plan to revive the economy. Hardliners did well in the 2020 parliamentary elections.

What has been Iran’s response to U.S. sanctions?

Iran has responded in several ways. First, in mid-2019, after 14 months of Trump’s “maximum pressure” campaign, Tehran began breaching its obligations under the nuclear deal. The goal was partly to pressure European countries to do more to offset the negative impact of U.S. sanctions.

Second, Iran sought channels for illicit trade, although with limited success. It shipped gasoline to Venezuela in exchange for payment in gold, a hard currency easy to trade on international markets.

Third, Iran also boosted its oil exports by having its tankers evade detection and tracking by global tanker tracking services. Tankers carrying Iran oil in defiance of U.S. sanctions reportedly turned off their transponders and conducted offshore transfers. Iran still managed to continue exporting at least 300,000 barrels per day of crude oil to China, and sometimes substantially more than that. It also exported an average, during some months, of about 30,000 barrels per day of oil to Syria.

If the United States lifted sanctions on Iran’s nuclear program, what sanctions would remain on Iran – and on what issues?

If the same pattern that is incorporated in the existing JCPOA is followed, several categories of U.S. sanctions would remain, including for:

Iran may push the United States to lift some of the sanctions in these categories. But none of these types of sanctions were lifted as part of the JCPOA, so the Biden administration would almost certainly keep them in place unless Iran changes it actions or policies.