How important is oil to the Iranian economy? Why has it been a focus of U.S. sanctions efforts?

Iran is endowed with massive hydrocarbon resources. Oil is Iran’s most important source of hard currency and pivotal in funding government expenditures. But Iran’s economy is also now less dependent on energy than other oil-exporting states, including neighbors such as Saudi Arabia. In fiscal 2018-19, before the most restrictive U.S. sanctions were in place, Iranian crude oil and natural gas exports accounted for 18 percent of GDP and about one-quarter of government revenues. In contrast, oil and gas exports contributed about one-third to Saudi Arabia’s GDP and constituted two-thirds of all Saudi government revenues in 2018. 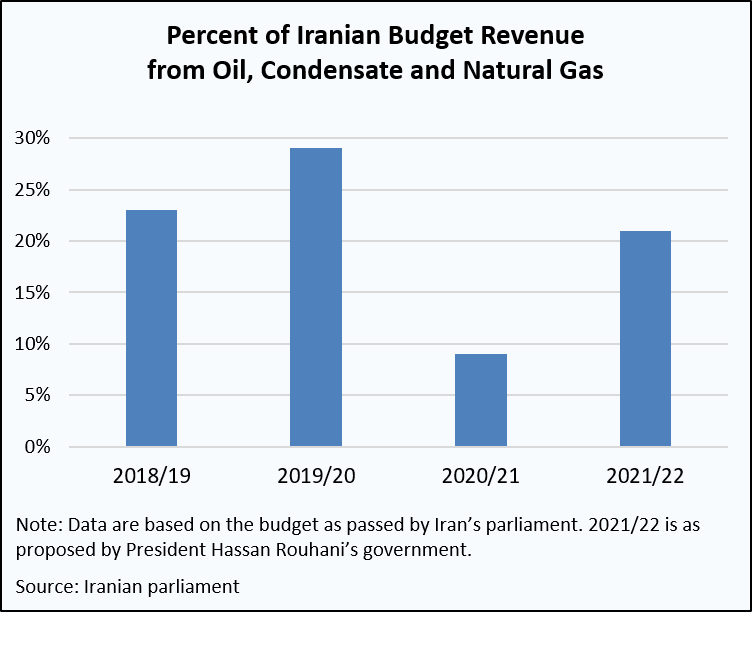 Under Presidents Obama and Trump, the United States imposed economic sanctions to prevent Iran from profiting off its oil exports. Oil is traded predominantly in dollars, and oil sales involve a complex web of shipping companies, insurers, ports, pipelines, and refineries—all of which are vulnerable as targets of U.S. secondary sanctions. U.S. sanctions have also discouraged the relatively small number of foreign companies that have the technical expertise needed to upgrade Iran’s upstream and downstream capabilities, in turn limiting the long-term growth of its oil industry.

Supreme Leader Ayatollah Ali Khamenei has claimed that U.S. sanctions have had a beneficial side effect as a way to reduce Iran’s economic reliance on oil exports. The government expected oil to provide just nine percent of revenues for the fiscal year from mid-March 2020 to mid-March 2021. Khamenei also said that Iran’s dependency on crude oil as the main source of revenue stood in the way of developing higher-value products to export. Nevertheless, President Hassan Rouhani’s government has been eager to increase crude oil exports—if U.S. sanctions are lifted—as a key source of revenue. For the fiscal 2021-22 budget, his administration proposed increasing reliance on oil revenue to roughly the same level as before the Trump administration reimposed sanctions in 2018.

President Donald Trump tried to drive Iranian oil exports to zero, a key part of his administration’s “maximum pressure” campaign. How much oil was Iran selling at the end of 2020, and who was buying it?

Iran does not formally report the volume of oil exports; there is considerable uncertainty about the real figure. Iran exported from 300,000 bpd to 500,000 bpd in the final three months of 2019. In the final three months of 2020, most oil trackers, consultancies, and news organizations have concluded that Iran exported no more than 1 million barrels per day (bpd) of crude oil, but the estimates vary from 300,000 bpd to 900,000 bpd. This could represent a major increase—potentially doubling sales—from 2019. China bought the lion’s share of Iranian exports, either directly or through intermediaries. And Iran exported limited quantities to Syria. Iran also sold a relatively small amount of ultralight crude, known as condensate, which is sometimes added together with crude in reporting monthly exports. 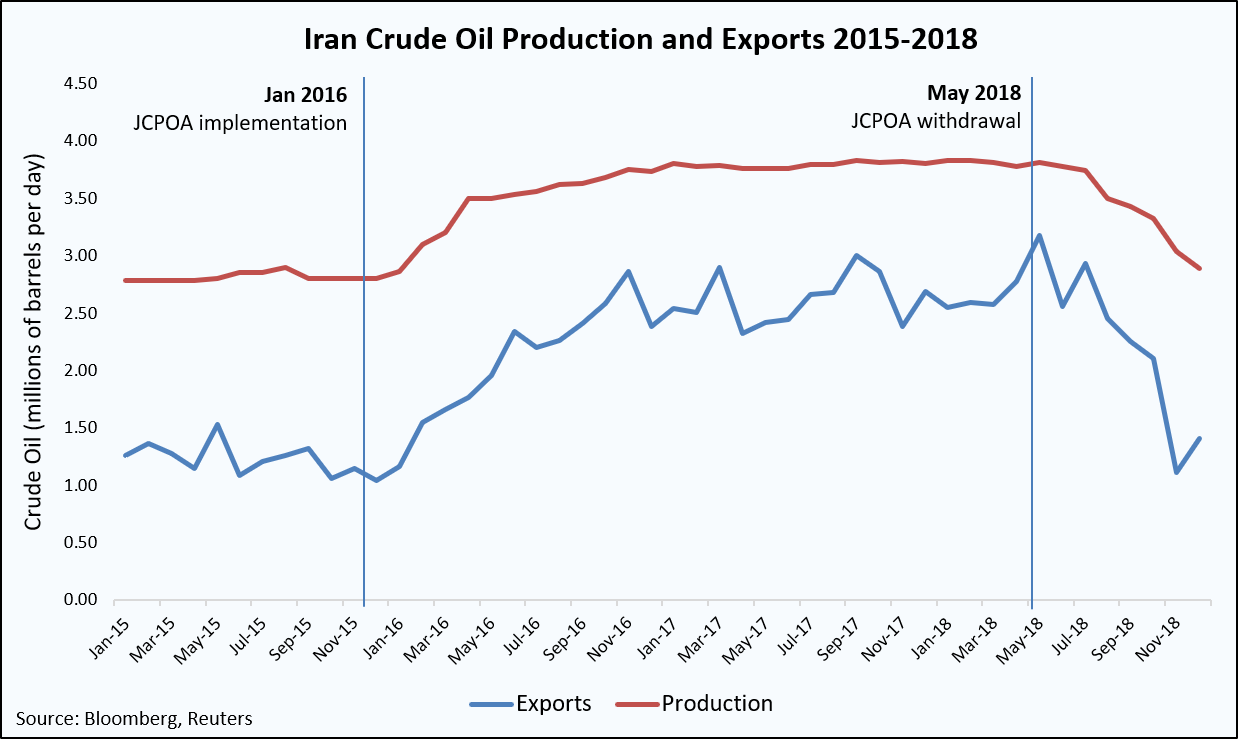 Export numbers are only half the story. Not all of the Iranian oil shipped to Asia is sold. Some is placed in storage for future use. Iran offers discounts to incentivize buyers to take the risk of violating U.S. sanctions.

Tehran also has a difficult time accessing the money that it earns because of the rippling effect of U.S. sanctions. The public dispute between Iran and South Korea over frozen oil payments illustrated the complexity of the issue. South Korea had frozen $7 billion in Iranian assets because of the threat of U.S. sanctions on any foreign financial institution for doing business with Iran. In January 2021, Iran’s Revolutionary Guards seized a South Korean chemical tanker off the coast of Oman; Iran charged it had engaged in “polluting international waters.” In early January 2021, the State Department charged that Tehran was retaliating for Seoul’s compliance with the U.S. sanctions: “The regime continues to threaten navigational rights and freedoms in the Persian Gulf as part of a clear attempt to extort the international community into relieving the pressure of sanctions.” 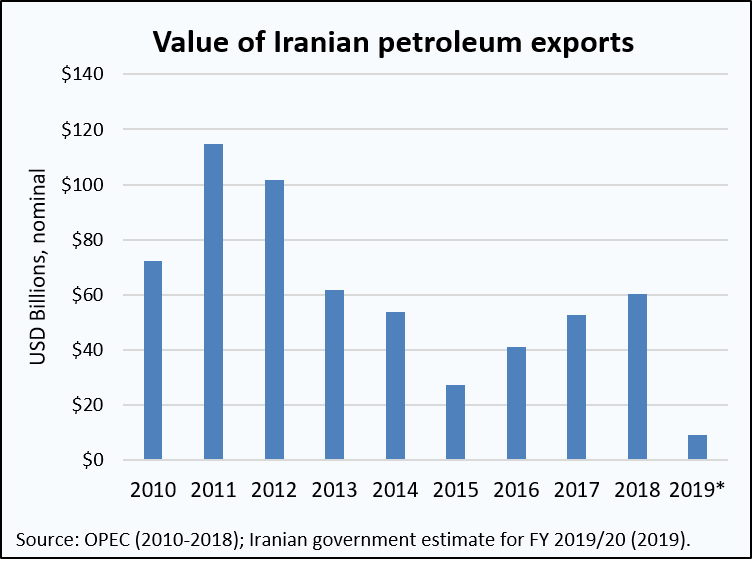 Because of the global impact of U.S. sanctions since 2018—both in reducing exports and freezing accounts—Iran has had limited access to its own oil export revenues. For example, Iran earned $41 billion in oil exports in 2016 and $53 billion in 2017. But Iran earned only $8 billion to $9 billion in oil revenues from March 2019 to March 2020. And over the next six months, from March to September 2020, parliament claimed that Iran earned only $2.5 billion from oil exports. Even with the uptick in oil prices since the fall of 2020, the government is not likely to meet its revenue target of $18 billion for fiscal year 2020-21.

How does Iran try to bypass U.S. oil sanctions?

Iran has tried a number of strategies to make it more difficult for the United States to identify and track its oil shipments. Iranian oil tankers, or ships carrying Iran oil, routinely turn off their transponders to conceal their origins or destinations. Some tankers have clandestinely transferred cargo from one to another in the middle of the ocean. Less-sophisticated techniques involve reflagging or renaming ships or falsifying documents. Some exporters have tried to conceal the Iranian origin in other ways, such as by blending the Iranian crude in with oil from elsewhere. But advances in technology have made some of these strategies more difficult. The proliferation of commercial satellite imagery also makes it cheaper and easier for governments and industry to monitor exports.

If sanctions are removed, how quickly could Iran resume oil exports? Who would buy the oil? 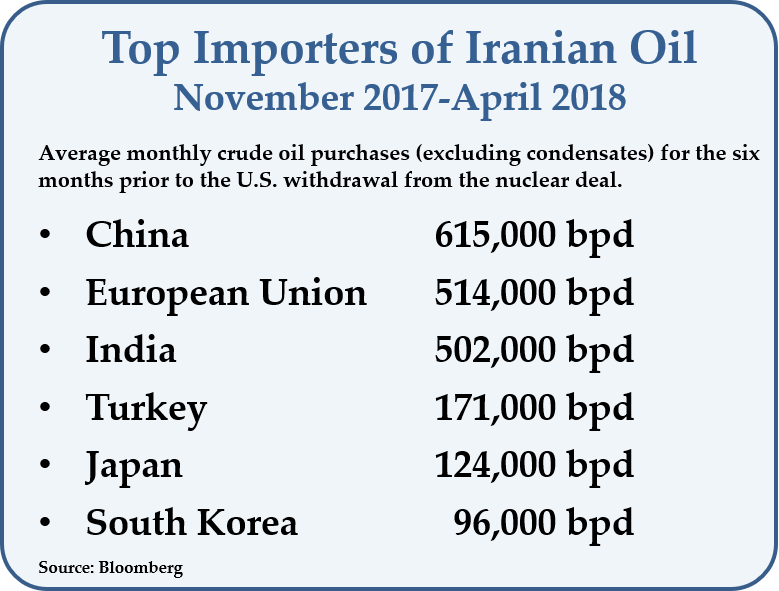 Iranian officials have offered differing estimates of how quickly Tehran could again export 2.3 million bpd, the rough baseline before the U.S. withdrawal from the JCPOA in May 2018. In December 2020, Oil Minister Bijan Zanganeh reportedly told lawmakers that Iran could ramp up exports within three months, while the deputy oil minister said in January that Iran may only need “a month or two.” Tehran had more than 110 million barrels of crude oil in onshore storage and on oil tankers in the summer of 2020, which could be quickly sold to customers as domestic oil production ramps up again.

But Iran’s target goal may prove too optimistic. After the nuclear deal was implemented in January 2016, Iran took about five months to increase oil exports from 1.1 million bpd to 2.1 million bpd. (At the time, Iran was able to ramp up exports faster than production because it had large amounts of oil in storage). If sanctions were lifted, China would likely increase purchases of Iranian oil. India is another potential customer. Before the Trump administration withdrew from the deal in May 2018, India had purchased about 500,000 bpd of Iranian oil, and its oil minister has expressed interest in resuming imports.