Already hard hit by U.S. sanctions, Iran faced a stunning decline in the price of oil – a major source of revenue – as an unexpected byproduct of the coronavirus pandemic. By April 1, the price of Iran’s heavy crude fell to below $14 per barrel — down from $44 or more per barrel in February. The trend was worldwide. On April 22, Brent crude, a global benchmark, fell to a two-decade low of $15.98 a barrel — down from nearly $70 per barrel in early January.

But Iran has been forced to sell oil at an even cheaper price and offer incentives to buyers because of U.S. sanctions reimposed in November 2018. Revenue shortfalls will be problematic for Iran and other exporters – including its regional rival Saudi Arabia – with budgets based on much higher prices. 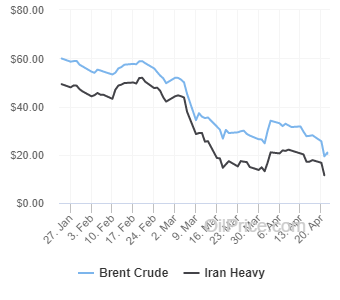 The budget for the Iranian year, which started on March 20, was based on sales of 1 million barrels per day (bpd) at an average of $50 per barrel. The estimate was optimistic even before the coronavirus outbreak. In April, the International Monetary Fund (IMF) projected that Iran’s exports will average only 500,000 bpd in 2020 – half of what Tehran needs. In March, Iran reportedly exported as little as 140,000 bpd.

Iran’s foreign currency reserves, which it needs to import consumer goods, machinery and industrial materiel, will be endangered by falling oil revenues. The Islamic Republic has become increasingly dependent on imports of essentials such as wheat, sugar, corn, rice, red meat, soybeans, and paper. Imports of essentials were up 17 percent in the last Iranian year that ended in March 2020. “Persistently low prices will exacerbate the imbalance between imports and exports and force Iran to draw more on its foreign currency reserves, giving it less of a cushion moving forward,” said Henry Rome, a senior analyst at the Eurasia Group. The slash in prices could also deepen Iran’s budget deficit, which is projected to be 9.9 percent of GDP in 2020, up from 5.7 percent in 2019, according to the IMF.

Iranian officials have tried to downplay the impact of historically low oil prices. On April 21, First Vice President Eshaq Jahangiri announced that the budget had been adjusted to assume zero oil revenue. In Iran’s budget for 2019, oil revenues accounted for 29 percent of budget revenues. For 2020, oil revenues were projected to account for nine percent of the budget. “The crises and the sanctions imposed by the United States of America have prepared us for running the country under the current circumstances,” he said. 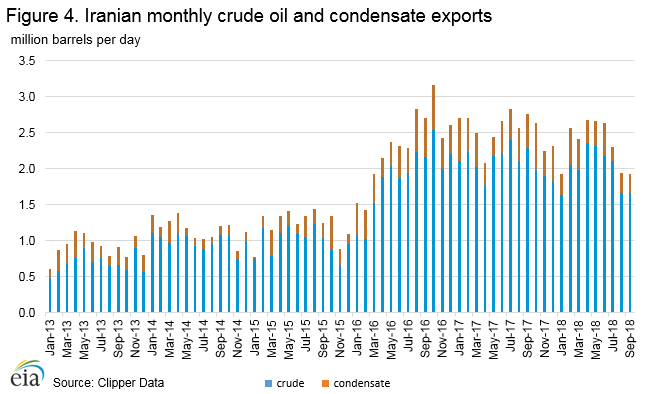 Iran’s oil exports were already severely curtailed by U.S. sanctions, which were re-imposed by the Trump Administration in November 2018. Iran’s oil exports have dropped from a high of 2.54 million barrels per day in October 2016. By April 2019, Iran exported about 1 million bpd. In May 2019, Washington intensified its “maximum pressure” campaign to get Iran to negotiate an expanded nuclear deal. It also cancelled sanctions waivers for key countries that bought Iranian oil, which further crimped oil sales.

The first global price shock came in early March, as an increasing number of governments ordered people to stay home. The demand for fuel sharply declined with less factories online, planes in the air and cars on roads.

On April 12, OPEC and its partners, including Russia, finalized a deal to cut oil production by 9.7 million barrels by July. It had the potential to push prices back up somewhat.

But a second price shock came in late April. Prices fell due to the shortage of storage space for excess supply. On April 20, the price of West Texas Intermediate, the benchmark for U.S. oil, hit negative $37.63, the lowest price in history. Global prices followed. On April 21, Iranian crude was selling for $11.51.

Feb. 19: Two elderly people in Qom died from COVID-19, according to Iran’s health ministry. It was the Iran’s first cases of coronavirus, which had originated in Wuhan, China in late December.

Mar. 6: The Organization of the Petroleum Exporting Countries (OPEC) and Russia ended a three-year supply cut pact after Russia refused to significantly cut oil production to cope with decreased demand due to the coronavirus. In response, Saudi Arabia removed all limits on production and announced that it would cut its official selling price for all its crude grades in April.

Apr. 2: President Trump tweeted that he expected Saudi Arabia to reduce oil production by 10 million barrels after he spoke to Crown Prince Mohammed bin Salman. After Trump’s announcement, Brent crude jumped 17.8 percent, or $4.40, to $29.14 per barrel.

Just spoke to my friend MBS (Crown Prince) of Saudi Arabia, who spoke with President Putin of Russia, & I expect & hope that they will be cutting back approximately 10 Million Barrels, and maybe substantially more which, if it happens, will be GREAT for the oil & gas industry!

Saudi Arabia was “calling for urgent meeting of OPEC+ and a group of other countries, with the aim of seeking a fair agreement that will restore the desired balance to the oil markets,” according to Saudi Press Agency.  Russia, however, denied that talks were in the works.

Apr. 3: Saudi Arabia scheduled an emergency OPEC meeting for April 6 to negotiate a supply cut agreement with Russia. The final list of attendees for the video conference was not announced, according to OPEC officials. Brent crude prices rose more than 9 percent to $32.77 a barrel.

Apr. 12: OPEC, Russia and other oil-producing countries agreed to cut oil production by 9.7 million barrels per day, a tenth of global oil supply. Iranian Oil Minister Bijan Zanganeh said that Kuwait, Saudi Arabia and the United Arab Emirates had agreed to cut an additional 2 million barrels of oil outside of the OPEC+ deal, according to Iranian state media.

Apr. 20: West Texas Intermediate crude prices dipped into the negatives for the first time in history, closing at -$36.67 a barrel. The crash was due to a supply glut and fears that U.S. storage facilities would run out of capacity. The main U.S. stockpiles in Cushing, Oklahoma had risen nearly 50 percent since the beginning of March.

Brent crude oil plunged 9.5 percent to $25.41 a barrel. The drop was OPEC’s forecast that demand for crude oil would fall to the lowest point in three decades.

Apr. 21: Vice President Eshaq Jahangiri said that Iran had adjusted its budget to assume zero oil revenu. “The crises and the sanctions imposed by the United States of America have prepared us for running the country under the current circumstances,” Jahangiri said.

Apr. 22: President Hassan Rouhani said Iran was less vulnerable to oil price fluctuations than other countries. “The more countries rely on oil, the greater they suffer. But as our reliance on oil income has decreased, willingly or unwillingly, either by our own will or by the imposition of the enemy, our losses will certainly be less,” Rouhani said.

April 22: Brent crude, a global benchmark, fell to a two-decade low of $15.98 a barrel—down from nearly $70 per barrel in early January.

Garrett Nada is the managing editor of The Iran Primer at the U.S. Institute of Peace. Alex Yacoubian, a program assistant at USIP, contributed to the timeline.