Karim Sadjadpour
Overview
Supreme Leader Ayatollah Ali Khamenei is the single most powerful individual in a highly factionalized, autocratic regime. Major domestic and foreign policy decisions require his consent, and his top priorities are his own survival and that of the Islamic Republic.

In theory, Iran’s constitution was meant to combine theocracy with republicanism. In practice, Iran’s unelected institutions, namely the supreme leader and Islamic Revolutionary Guard Corps (IRGC), wield far more power than quasi-elected institutions like the presidency and parliament.
Khamenei lacks the popular support, charisma and theological qualifications of his predecessor Ayatollah Ruhollah Khomeini, the father of Iran’s 1979 revolution. But he has shown a remarkable Machiavellian ability to outmaneuver domestic rivals and wield power without accountability. Today every major political figure and institution in Iran expresses deference toward Khamenei, at least in their public comments.
Khamenei is notoriously thin-skinned; public criticism of the supreme leader in Iran is a virtual guarantee of a prison sentence.
Khamenei’s rise
Khamenei was born in 1939 to a traditional family of humble origins. His father was a cleric, and he began a religious education at a young age. In his early twenties, he studied under Ayatollah Khomeini in Qom; through Khomeini he became involved in the rebellion against the shah. He was arrested numerous times in the 1960s and 1970s, spending several years in prison where he was allegedly tortured by the Savak secret police. 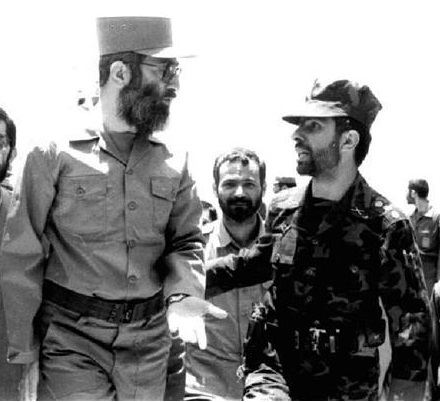 After the shah’s ouster, Khamenei briefly served as minister of defense and then supervisor of the Revolutionary Guards. In 1981, he survived an assassination attempt that paralyzed his right arm. Later that year, after one president was impeached and a second assassinated, revolutionary elites asked Khamenei to run for president. He was elected and served the maximum two terms, from 1981 to 1989. His tenure was dominated by the Iran-Iraq War. Khamenei, however, played a secondary political role behind Prime Minister Mir Hossein Mousavi (now an opposition leader under house arrest since 2011), Speaker of the Parliament Akbar Hashemi Rafsanjani, and Revolutionary Guard Commander Mohsen Rezaei.
Ayatollah Khomeini died in 1989 just months after firing his heir apparent, leaving no designated replacement. With the help of Rafsanjani, Khamenei emerged as the default choice to become the new supreme leader. His appointment was opposed by some senior clerics who felt he was unqualified, but the Assembly of Experts eventually approved him. Today, three decades later, he has emerged as one of the most powerful Iranian leaders of the last century. His likeness—black turban, oversized glasses, Palestinian kaffiyeh, and untrimmed gray beard—is ubiquitous in shops, government offices, and billboards throughout Iran.
The leader’s powers

Revolutionary leader Ayatollah Khomeini introduced the concept of velayat-e faqih, or guardianship of the jurist. It is derived from Shiite Islam, whose followers believe twelve imams descended from the Prophet Mohammed, inheriting his political and religious authority. The twelfth imam went into occultation, or hiding, in the 9th century, and Twelver Shiites believe he will one day return as a messiah. In the absence of the twelfth imam, Khomeini argued, the missing imam’s authority on earth could be exercised by a supreme leader chosen from among the clergy.
As supreme leader, Khamenei has constitutional authority over the judiciary, the regular armed forces and the elite Revolutionary Guards, and the state-controlled media. He also has effective control over powerful institutions, such as the 12-member Guardian Council, which has the authority to vet electoral candidates and veto parliamentary decisions. (Khamenei appoints half its members, as well as the judicial chief who appoints the other half.) The Iranian economy is largely state-controlled, and Khamenei has discretionary authority over how the country’s oil revenue is spent. He also oversees the country’s bonyads—charitable foundations with billions of dollars in assets—in addition to the millions more his office receives in charitable donations offered to Iran’s holy shrines.
Given that Khamenei hasn’t left Iran since 1989, he has often been overshadowed by Iran’s presidents in international media coverage. From 1989 to 1997, President Hashemi Rafsanjani, not Khamenei, was widely perceived as Iran’s most powerful official. From 1997 to 2005, President Mohammad Khatami upstaged Khamenei from the left with his calls for reform at home and a “dialogue of civilizations” with the West. From 2005 to 2013, President Ahmadinejad outflanked him from the right with his diatribes against Israel and Holocaust revisionism. And since 2013, President Hassan Rouhani and Foreign Minister Mohammad Javad Zarif have given the international community hopes for a more open, moderate Iran. Yet Khamenei’s views have consistently prevailed: His domestic vision for Iran is more Islamic than republican. And his foreign policy views prioritize resistance against the United States, the rejection of Israel’s existence, and rivalry with Saudi Arabia. 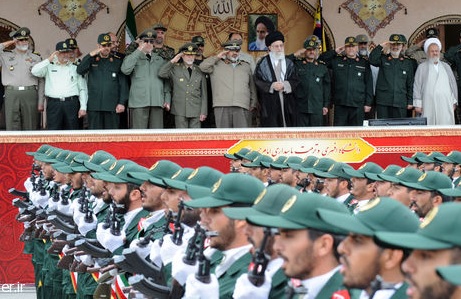 Several factors have also helped Khamenei gradually consolidate power: He created a vast network of “clerical commissars” in major public institutions who are empowered to intervene in state matters to enforce his authority. The Revolutionary Guards, whose top commanders he appoints, have eclipsed the clergy as Iran’s most potent political and economic institution. Externally he has shrewdly capitalized on growing power vacuums in the Middle East, created by popular uprisings and the U.S.-led removal of Iran’s chief regional adversary, Iraq’s Saddam Hussein.
Revolutionary values 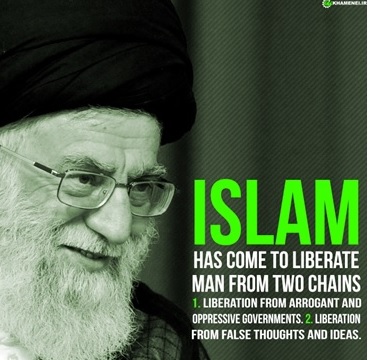 For Khamenei, the 1979 revolution was about ridding Iran of two evils—the shah and the United States—and creating a theocratic government imbued with four core values: justice, independence, self-sufficiency and Islamic piety. These revolutionary ideals continue to dominate Khamenei’s political discourse, and he interweaves them seamlessly: Islam embodies justice. Independence requires self-sufficiency. And foreign powers are hostile to an independent, Islamic Iran.
Khamenei’s vision for a just Islamic society translates as a form of religious socialism. Western governments fail, he argues, because the whims of capitalism and self-interest deny justice to millions. He has championed privatization efforts, yet state subsidies for basic staples remain Iran’s chief method of providing economic development and social justice.
Foreign policy priorities
The United States: For Khamenei, the Islamic Republic’s top foreign policy priorities include resistance against the United States and Israel, which he sees as two sides of the same coin. Khamenei believes that Washington aspires to go back to the patron-client relationship with Iran that existed during the Pahlavi monarchy. His primary concern is not a U.S. military invasion, but rather a political and cultural campaign to undermine theocratic rule through a “soft” or “velvet” revolution.
The peace process: The Israeli-Palestinian conflict has little impact on the daily lives of Iranians, but Khamenei’s contempt for Israel has been remarkably consistent. He has argued that “if Iran stops its support of the Lebanese and Palestinian people, the United States will also change its hostile attitude toward the Islamic Republic. [But] we consider supporting the Palestinian and Lebanese people one of our major Islamic duties.” Arguably, the only way that Khamenei would accept a less strident position toward Israel is when and if the Palestinians themselves accept a peace treaty with Israel.
Nuclear program: For Khamenei, the nuclear program has come to embody the revolution’s core themes: the struggle for independence, the injustice of foreign powers, the necessity of self-sufficiency, and Islam’s high esteem for the sciences. He wants to ensure that Iran is scientifically and technologically advanced enough to be self-sufficient, self-sufficient enough to be economically independent, and economically independent enough to be politically independent. Khamenei’s deep-seated suspicions of the United States will likely complicate the verification process of the Joint Comprehensive Plan of Action, the nuclear deal signed by the world’s six major powers and Iran in July 2015.

In case of #IranDeal approval, be concerned about and close paths to possible violation of commitments by the other parties.

Saudi Arabia: In addition to the United States and Israel, Saudi Arabia has increasingly been the object of Khamenei’s ire. The ethnic, sectarian, and ideological rivalry between Tehran and Riyadh has been exacerbated in recent years given the two countries support for opposing sides of conflicts in Syria, Iraq, Lebanon, Bahrain, and Yemen.
Islamic world: Khamenei envisions Iran as the vanguard of the Islamic world. On his official website, he is referred to as the “Supreme Leader of Muslims.” Given Iran’s political, cultural and religious influence, he believes none of the critical issues facing the Middle East and Muslim world can be fully addressed or resolved without Tehran’s input. In contrast to much of the international media that referred to popular uprisings in the Middle East as an “Arab Spring,” Khamenei has consistently referred to it as an “Islamic Awakening.”
Challenges
Khamenei’s domestic power and Iran’s regional power have never been greater. Nearly every political figure and institution in Iran seeks to praise rather than challenge the supreme leader. At the same time, Tehran has taken advantage of Arab power vacuums and U.S. missteps and fatigue in the Middle East to wield sizable influence over four Arab capitals, namely Damascus, Baghdad, Beirut, and Sana’a.
In the aftermath of the nuclear deal, several challenges loom for Khamenei in the near term. In addition to implementing the nuclear accord, he will have to reconcile the growing demands of a young, modern population and his longtime hardline political base. The economic prosperity and political and social freedoms sought by the former is considered a direct threat by the latter. Given that Iran has concluded a nuclear deal after nearly two years of vigorous diplomacy with the United States, there are already popular expectations for continued normalization with Washington, something deeply opposed by Iran’s hardline elite.
Regionally, Khamenei will have to find a way to both preserve its interests in Syria as well as bring the country’s civil war to a halt. Tehran’s enormous financial and military support for the Assad regime has fueled anti-Persian, anti-Shiite sentiment throughout the Sunni Arab world. Such sectarianism is inimical to Khamenei’s aspiration of leading the broader Muslim world, not just the Shiite world. Downward trends in oil prices could also limit Iran’s regional adventurism.
In the medium and long term, Khamenei’s foremost priority will be to die as supreme leader or ensure a power succession takes place in an orderly fashion. While in 2009 Khamenei’s legitimacy and political future appeared highly uncertain, as of 2015 there appear no major challenges to his rule. Despite his advanced age, longtime health rumors, and a recent hospital stay, Khamenei does not appear not be ailing in public appearances. He has not appointed an heir apparent and there are no obvious successors, should he die or be removed from power. 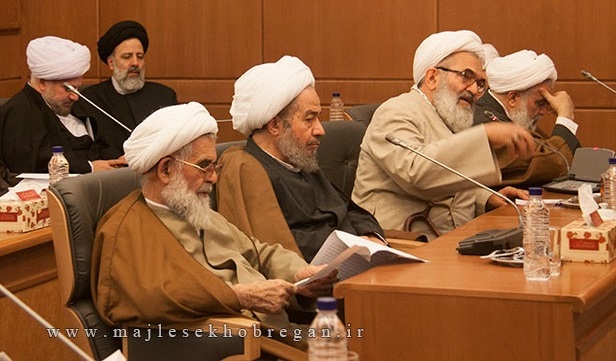 In theory, the clerics that compose the 86-member Assembly of Experts will anoint the next supreme leader. In practice it’s likely that the powerful Revolutionary Guards will weigh in to influence who will be their next commander in chief. In the absence of a consensus candidate there is often speculation in Tehran that the leader could be replaced instead by a shura (consultative) council, composed of several top clerics.
Trend lines
Karim Sadjadpour is an associate at the Carnegie Endowment for International Peace and the author of “Reading Khamenei: The Worldview of Iran’s Most Powerful Leader.”

Photo credits: Khamenei during the Iran-Iraq War via Leader.ir, IRGC graduation ceremony via Leader.ir, Khamenei and Khomeini via Khamenei.ir, and Assembly of Experts via majleskhobregan.ir