Iran’s missile program, which dates back to the monarchy, has been an increasingly important military staple since the 1979 revolution, as the Islamic Republic’s warplanes became obsolete. In the mid-1980s, Tehran acquired Scud missiles from Libya, Syria and North Korea and also began adapting the technology for their missile variants. Since the late 1980s, Iran has developed an increasingly sophisticated arsenal of missiles—with growing range and accuracy—that became critical to its offensive capabilities as well as its strategy of defensive deterrence. Iran has launched missiles in three major bursts over the past four decades, but as of early 2021 it had only fired short-range ballistic missiles that have with a maximum range of 800 km (500 miles). 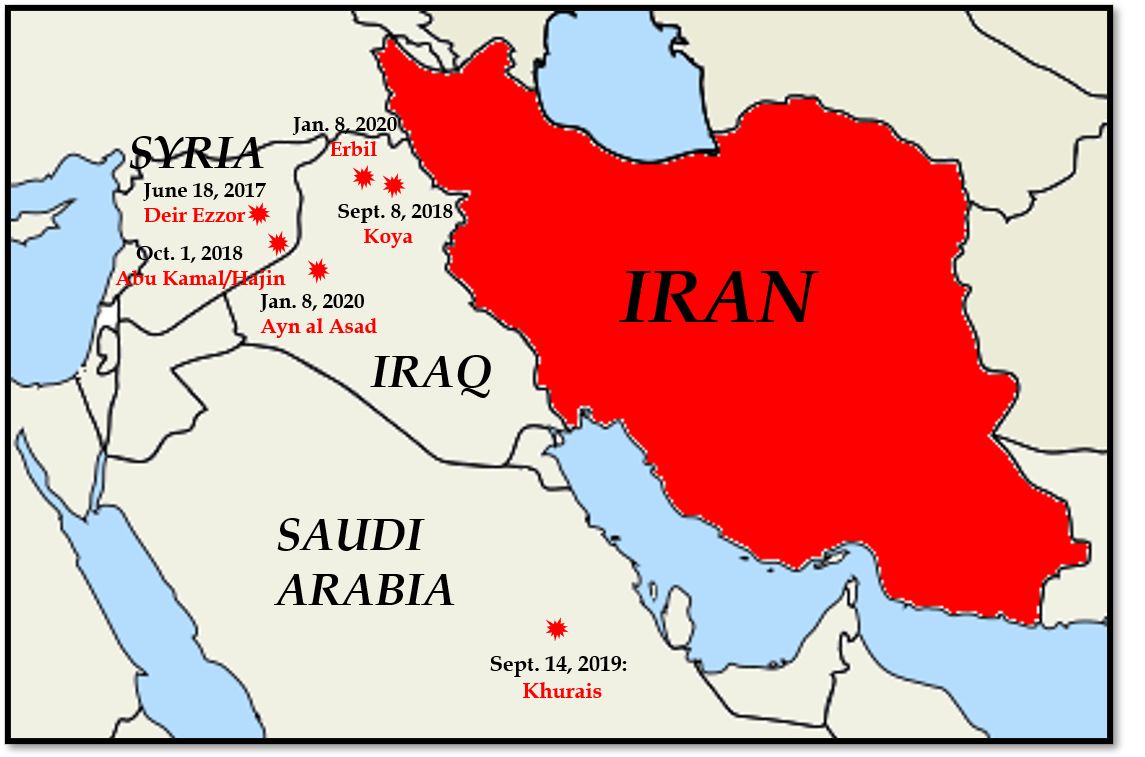 The Revolutionary Guards launched five to six Zolfaghars, solid-fueled missiles with a range of some 700 km (430 miles), at an ISIS command center and an assembly site for car bombs in Deir Ezzor province in eastern Syria. They may have also launched one Qiam-1, a liquid-fueled missile with a range of 700 to 800 km (440 to 500 miles). “A large number of terrorists have been killed and their equipment, systems and weapons have been destroyed,” the Guards reported. The short-range ballistic missiles, launched from trucks, traveled more than 600 km (370 miles) from Iran’s western provinces of Kermanshah and Kurdistan. The operation was in retaliation for twin ISIS attacks on Iran’s parliament and the shrine of late revolutionary leader Ayatollah Ruhollah Khomeini on June 7, 2017.

The Revolutionary Guards fired seven Fateh-110s, solid-fueled missiles with a range of 300 km (185 miles), at Iranian Kurdish dissidents based in Iraq. The short-range ballistic missiles reportedly hit the headquarters of the Kurdistan Democratic Party–Iran (KDP-I) and the Democratic Party of Iranian Kurdistan (PDKI) in the town of Koya, in Iraq’s Kurdistan region. At least 11 people were reportedly killed and dozens were wounded, including the KDP-I’s secretary-general. Fateh missiles are solid-fueled missiles that can be launched from trucks.

The operation followed new clashes between Iranian border guards and Kurdish dissidents. KDP-I and PDKI militant seek greater autonomy for the Kurdish minority in Iran. Since at least the 2000s, Kurdish opposition groups have sporadically attacked Iranian soldiers from across the border. “The punishment of transgressors was planned following the recent months’ wicked acts by terrorists from the Kurdistan realm against the Islamic Republic’s borders,” the Revolutionary Guards said.

The Revolutionary Guards fired six short-range ballistic missiles at ISIS targets in the Abu Kamal and Hajin regions of eastern Syria, near the Iraqi border. Iranian media reported that the missiles included Zolfaghars and up to two Qiam-1s. The Zolfaghar is solid-fueled missile with a range of some 700 km (430 miles). The Qiam-1 is liquid-fueled missile with a range of 700 to 800 km (440 miles to 500 miles). Iran claimed that some 40 ISIS leaders were killed.

The operation was retaliation for an attack on a military parade in the Iranian city of Ahvaz on September 22, 2018. “Terrorists used bullets in Ahvaz,” Revolutionary Guards Gen. Amir Ali Hajizadeh, told Tasnim news agency. “We answered them with missiles.”

Yemen’s Houthi rebels, which have allegedly received weapons from Iran, claimed responsibility for twin attacks on Saudi Arabian oil facilities at Abqaiq and Khurais. But Washington and Riyadh blamed Tehran. Iran reportedly launched 18 drones and seven cruise missiles from its Ahvaz Air Base in southwest Iran, about 400 miles north of the Saudi facilities. Four out of the seven missiles reached the Khurais facility. The attacks temporarily disrupted production of 1.2 million barrels per Khurais and 4.5 million barrels per day at Abqaiq, about half of Saudi Arab’s total crude oil output.

The Revolutionary Guards launched 15 to 22 short-range ballistic missiles at Ayn al Asad and Erbil Air Bases in Iraq, which also housed U.S. soldiers. The attack reportedly involved two or more types of missiles, including the Zolfaghar, a solid-fueled missile with a range of some 700 km (430 miles). The Fateh-313, a solid-fueled missile with a range of 500 km (310 miles), and the Qiam-1, a liquid-fueled missile with a range of 700 to 800 km (440 miles to 500 miles) also may have been fired but did not necessarily reach the bases. Some experts speculated Iran may have used Qiam-2s, which have a maximum range of 800 km (500 miles). More than 100 U.S. service members were diagnosed with traumatic brain injuries after the attack, and several structures at Ayn al Asad were damaged or destroyed. The missiles “were intended to cause structural damage, destroy vehicles and equipment and aircraft, and to kill personnel,” said Mark A. Milley, chairman of the Joint Chiefs of Staff.

The attack was retaliation for the U.S. killing of Iranian Gen. Qassem Soleimani, the head of Iran’s elite Qods Force, on January 3, 2020. The U.S. drone attack on a convoy as it left Baghdad International Airport killed seven people, including Abu Mahdi al Muhandis, the leader of Kataib Hezbollah, an Iraqi militia trained and armed by Iran that had attacked U.S.-led coalition forces and Iraqi Security Forces. Washington alleged that Soleimani was planning new attacks targeting U.S. personnel and interests in the region.