In mid-September, Iran’s pandemic began a third wave, with more than 3,000 new COVID-19 cases a day. Deputy Health Minister Iraj Harirchi declared a COVID-19 red alert for the entire country on September 18. The government ordered the closure of businesses, mosques and schools in Tehran and Zanjan provinces. “If the current course continues, the death toll will reach 45,000,” Harirchi warned on television. By October 21, Iran recorded a daily high of 5,616 new cases. The spike in cases exceeded the two earlier peaks in March and June. More than 31,000 nurses were infected and 54 had died from the coronavirus, according to the national nurses' organization. 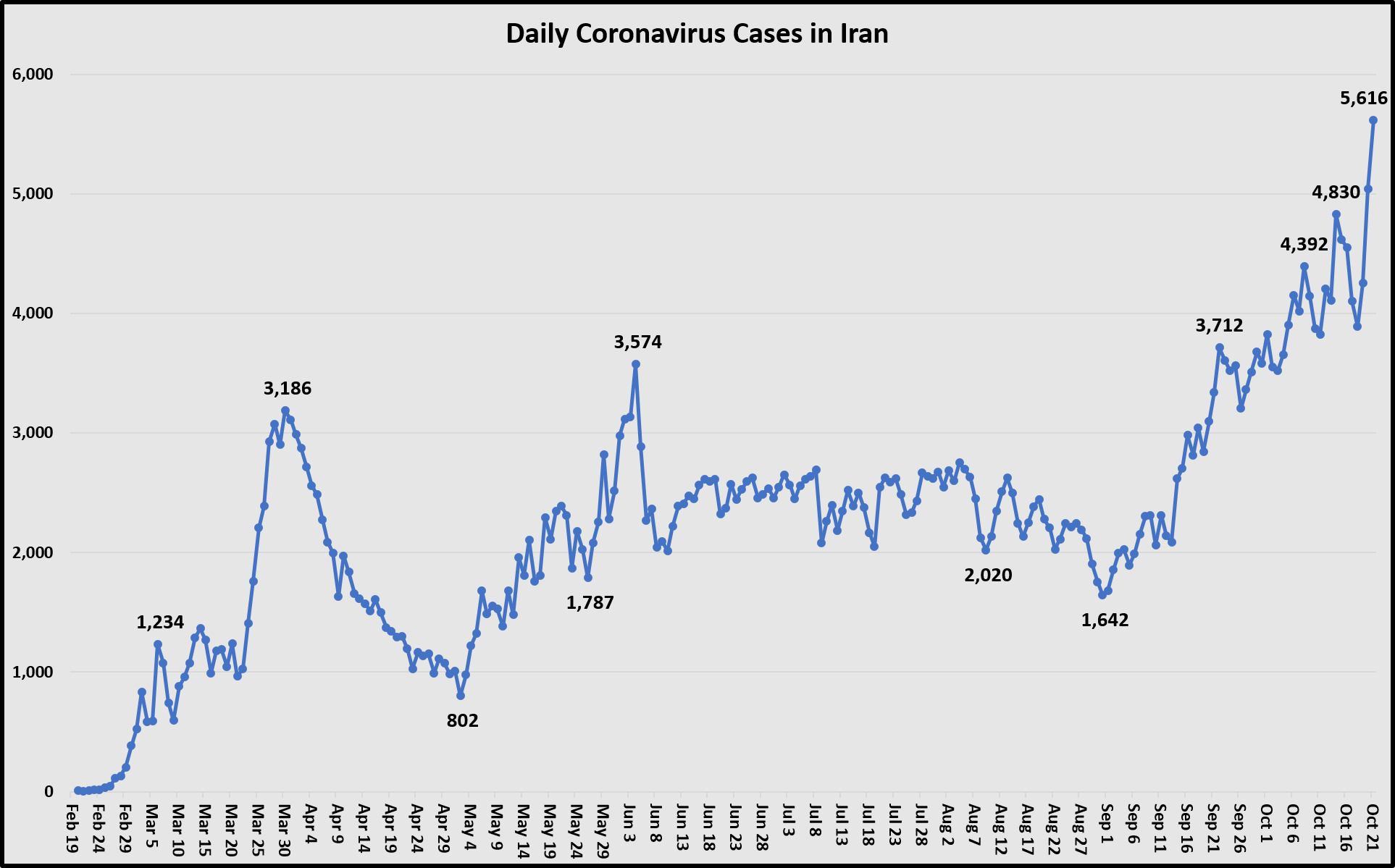 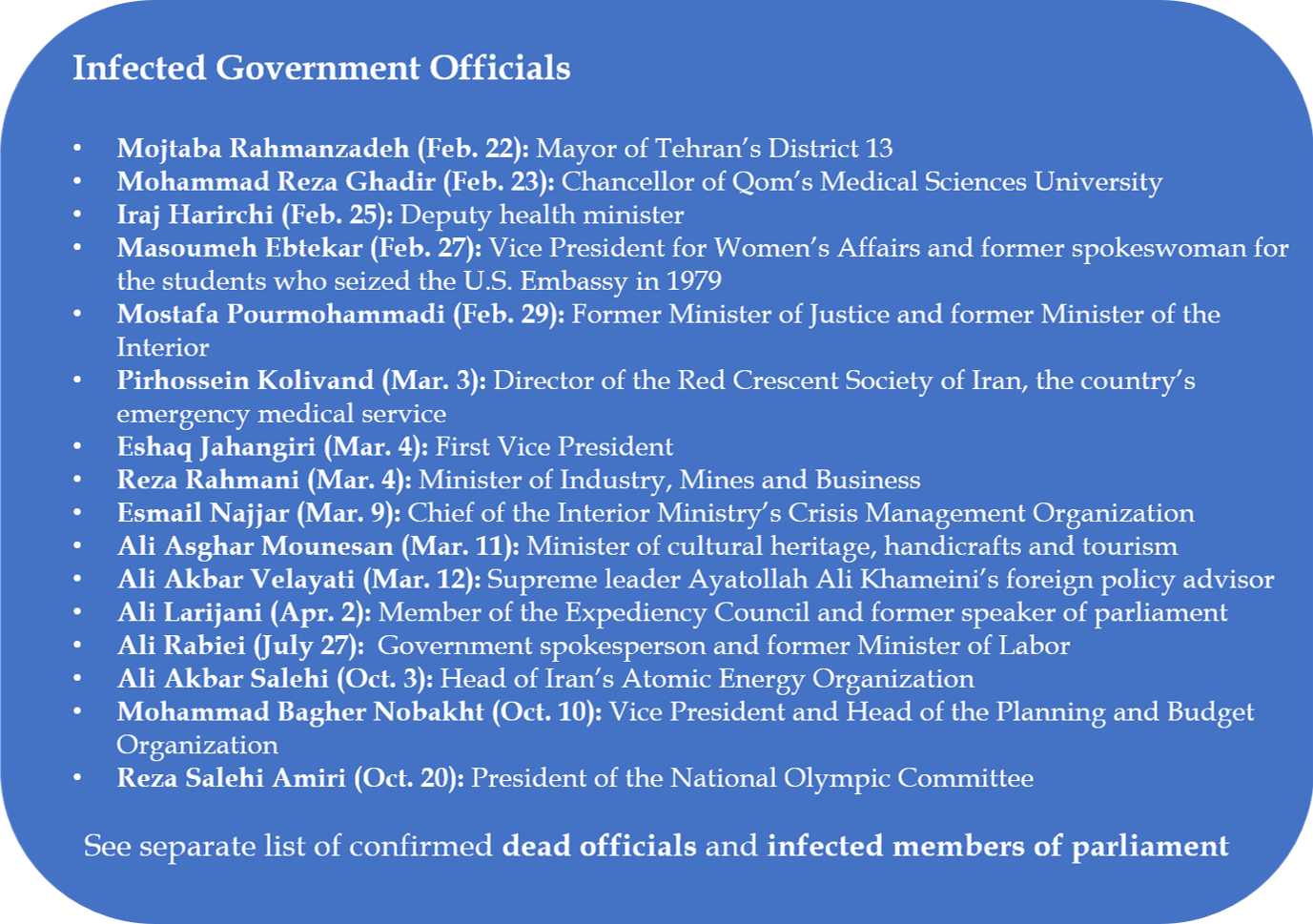 The government threatened strict punishments against Iranians who ignored public health protocols. “Those who hide their disease should be fined," President Hassan Rouhani warned on October 3. Punishments for not wearing a mask included a 500,000 rial fine ($1.55), year-long suspensions from jobs and closure of businesses. Iran, an early epicenter of the deadly virus, reported a total of 483,884 cases and 27,658 fatalities between Feb 19 and Oct 7, 2020—a mortality rate of 5.7 percent. (The global mortality rate at the time was 2.9 percent; the U.S. mortality rate was 2.8 percent). 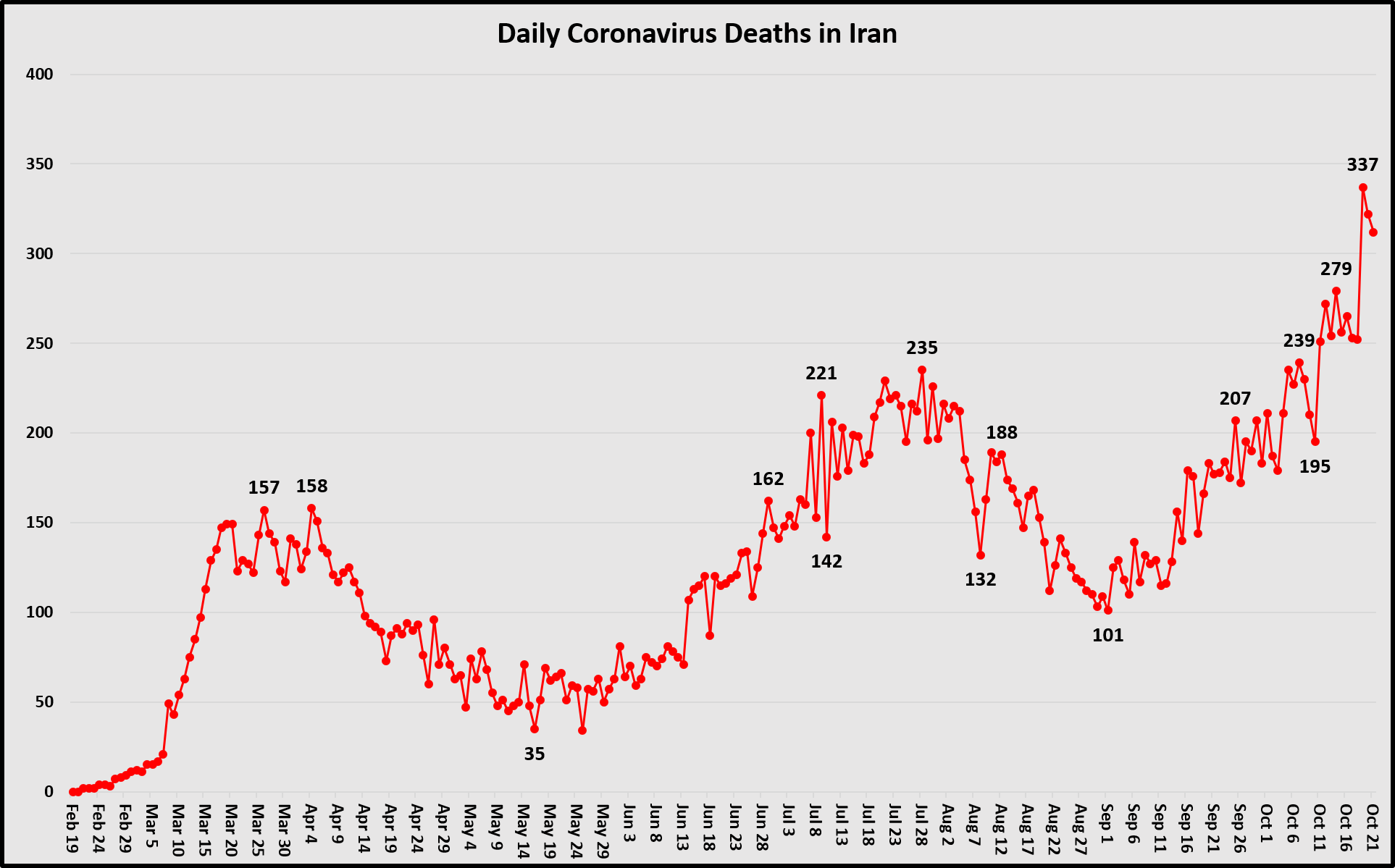 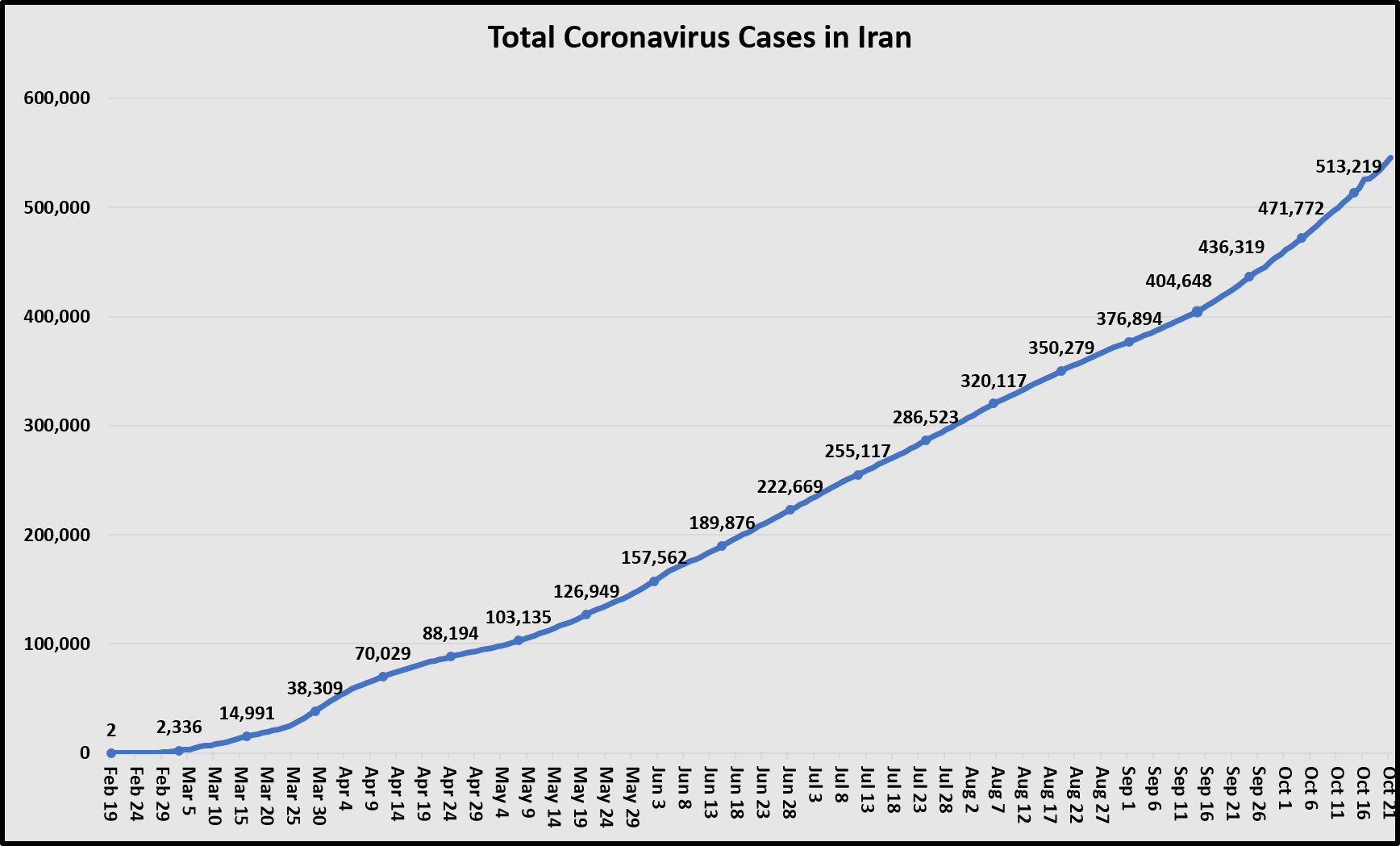 On September 26, provincial governors were given discretionary power to impose one-week lockdowns of schools, universities, mosques, cafeterias and other public places, depending on the severity and number of cases. Nationwide, the government canceled celebrations for the Shiite holiday of Arbaeen commemorating the death of Imam Hussein on October 7-8. The government instructed pilgrims not to travel to Iraqi holy city of Karbala during Arbaeen, an annual tradition for devout Shiites. It also banned all flights to Iraq. (Iraq shut the 900-mile border to pilgrims from Iran). On October 13, Iran imposed a travel ban on five cities: Tehran, Karaj, Mashhad, Isfahan and Orumiyeh. 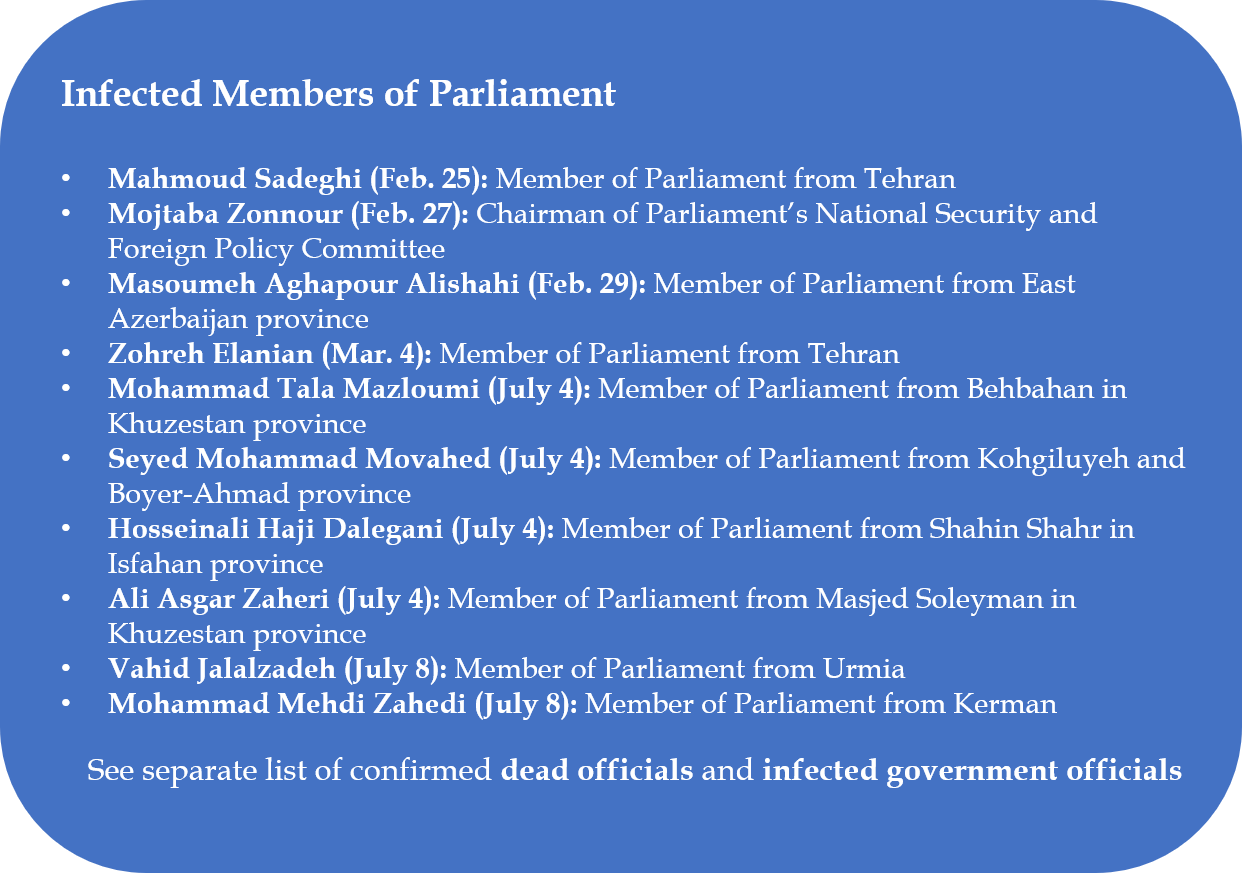 Iran was unable to contain the pandemic. October 19 was dubbed "Black Monday" by local media after 377 people died in a single day, a record high. More than 5,000 new COVID-19 cases were reported by the Health Ministry the next day. 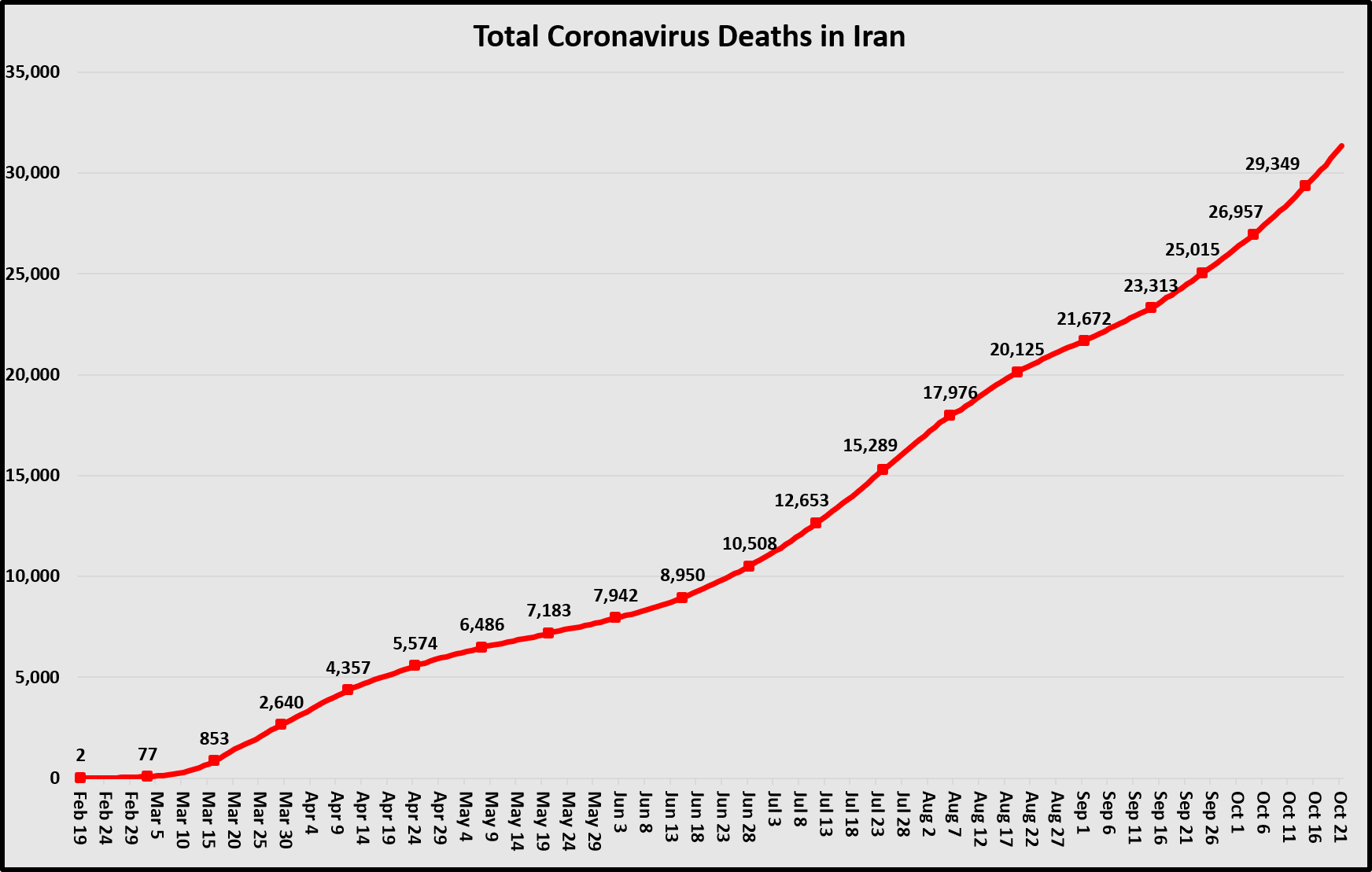 Iran has long sought relief from U.S. sanctions to deal with the pandemic. At the U.N. General Assembly in September, President Hassan Rouhani blamed the Trump administration for blocking needed medical and humanitarian supplies. “All of us across the globe are experiencing difficult times during the pandemic. However, my nation, the resilient people of Iran, instead of enjoying global partnership and cooperation, is grappling with the harshest sanctions in history imposed in blatant and gross violation of the Charter of the United Nations, international agreements and Security Council Resolution 2231," he said on September 23. To deal with the deepening growing pandemic, Tehran has sought new partnerships with India, Russia and China for the production and delivery of a coronavirus vaccine. 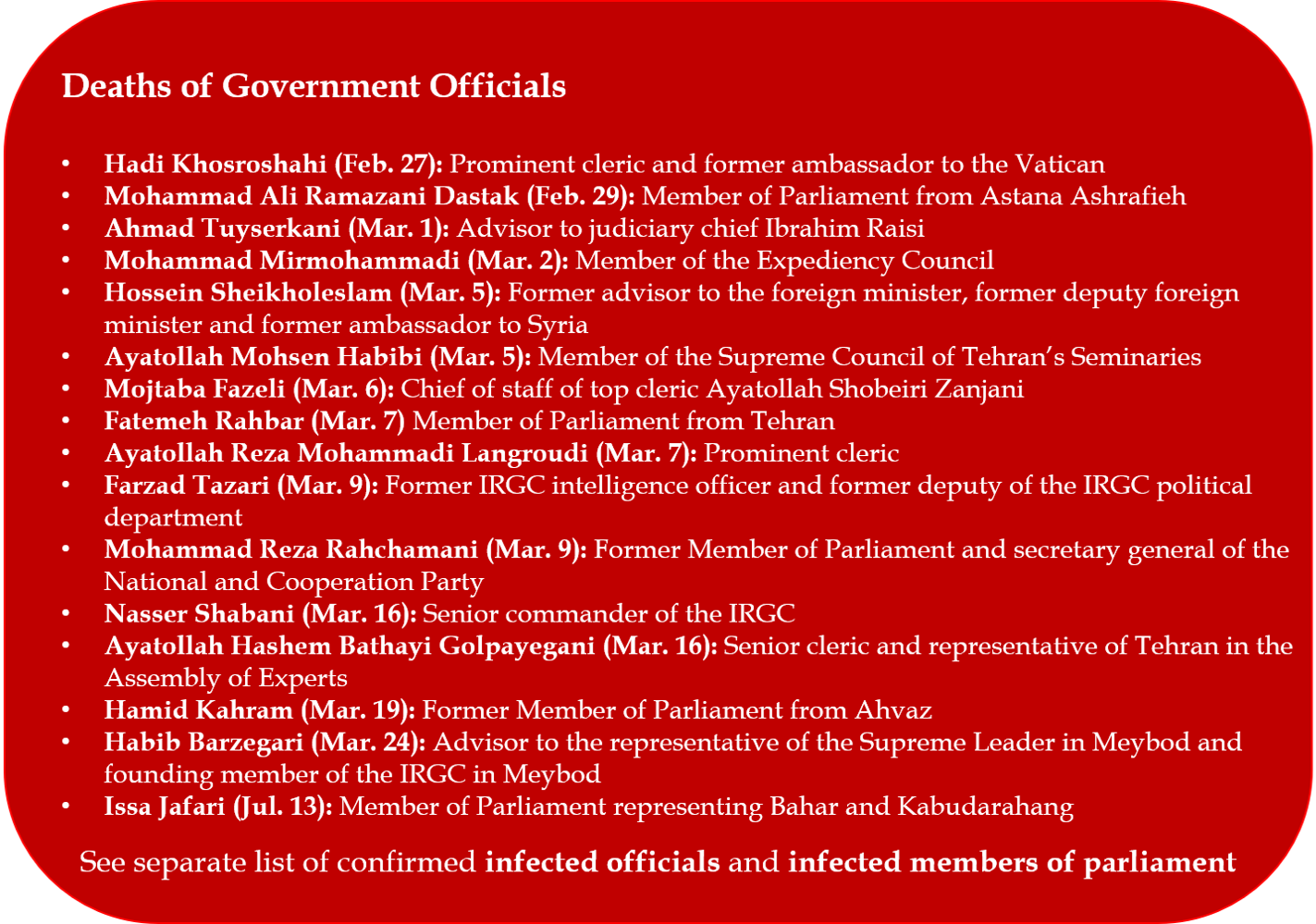 For details and analysis on the first seven months of the COVID-19 pandemic, see:

On September 7, Education Minister Mohsen Haji Mirzaei stipulated that students were “not obliged” to attend in-person classes after heavy criticism from health experts. “From the beginning, we said that students' presence at schools is not mandatory,” Mirzaei said. “We said that our priority is face-to-face education, which is more appropriate for several reasons.” 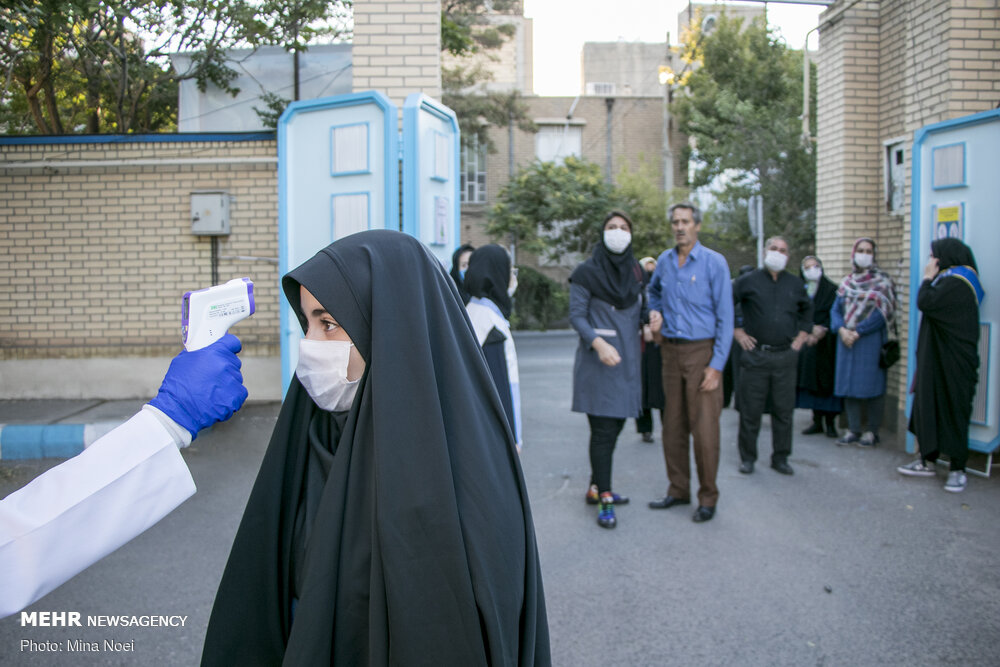 Masoud Babaei, an official from the Ministry of Cooperatives, Labor, and Social Welfare, said that 850,000 Iranians had lost their jobs between February and August due to the COVID-19 pandemic. In specific industries: 59 percent of jobs in the service industry were lost, while 31 percent of jobs in the industrial sector impacted.

On September 11, Health Minister Saeed Namaki announced that Arbaeen - the Shiite religious holiday commemorating the death of Imam Hussein - would be held virtually.

On September 12, Iran said that Tehran University would start human trials to produce a COVID-19 vaccine. Animal trials were complete and preparations were being made for clinical trials, Agricultural Minister Kazem Khavazi said.

On September 13,  First Vice President Eshaq Jahangiri ordered the tourism ministry to develop a plan to reboot Iran's tourism sector. The pandemic had caused "abundant financial losses" for Iran's tourism industry, but Jahangiri acknowledged that the ministry should implement its plan to reopen as soon as possible.

On September 14, Iran recorded the highest daily rise in COVID-19 fatalities since mid-August. More than 150 patients died in a single day, which put the overall official death toll at 23,313.

On September 17,  Rouhani pledged to add 10,000 beds to hospitals across the country before March 2021. The beds would distributed to hospitals to seven provinces -- in Tehran, East Azerbaijan, Esfahan, Sistan and Baluchestan, Kurdistan, Mazandaran and Gilan.

On September 18, Iran's health ministry issued a coronavirus red alert for the entire country because of a new spike in cases. “We no longer have orange and yellow,” Deputy Health Minister Iraj Harirchi said on national television. “The entire country is red.” Harirchi warned that the death toll could reach 45,000 if fatalities continued at the same rate.

On September 18, the Tehran Stock Exchange experienced growth for the first time in five consecutive weeks.

On September 19, Iran’s health minister said that Tehran would purchase 20 million doses of a coronavirus vaccine from an Indian company. Iran had negotiated a “lower and more reasonable price” for the vaccine, Namaki claimed.

On September 20, the banking sector loaned more than $1 billion to private sector business impacted by the coronavirus over a six-week period, the governor of Iran’s Central Bank said.

On September 22, the health ministry reported an all-time high of new COVID-19 infections. More than 3,700 new cases were identified within 24 hours, which was the highest daily increase since the pandemic erupted in February.

On September 22, Iran cancelled public processions for the Shiite holiday of Arbaeen. The government discouraged Iranians from traveling to the holy city of Karbala Ali Rabiei for the Arbaeen pilgrimage. In turn, Iraq said that no Iranian pilgrims would be allowed to cross the border this year.

On September 23, President Rouhani blasted the United States for maintaining sanctions on Iran during COVID-19 pandemic. “My nation, the resilient people of Iran, instead of enjoying global partnership and cooperation, is grappling with the harshest sanctions in history,” he said, during a speech at the U.N. General Assembly.

#COVID19 is a common pain, demonstrating that our ignorance outweighs our knowledge
It reminds us of imperative of humility &humbleness, that global issues need global participation
Iranians are grappling w/ harshest sanctions in history imposed in blatant violation of UN Charter

On September 24, the official death toll from the novel coronavirus was more than 25,000, the health ministry reported.

On September 26, Rouhani authorized provincial lockdowns to stem a surge in COVID-19 cases. basis. Governors were empowered to implement one-week lockdowns of schools, universities, mosques, cafeterias and other public places.

On September 30, Rouhani praised the establishment of a joint Iranian-Denmark medical and pharmaceutical center in Tehran. International cooperation during the pandemic is a " very important event," Rouhani said.

On October 1,  Iran was ready to work with China on joint production of a coronavirus vaccine, Rouhani said.

On October 3, Iran closed schools, libraries and mosques in Tehran for a week to control the spread of the novel coronavirus. President Rouhani said that the government would fine those who violated health protocols.

On October 6, Deputy Health Minister Iraj Harirchi announced that all Iranians would be required to wear masks in public as of October 10. He added that the government was discussing how much to fine citizens who break heath protocols. All flights to Turkey were suspended until November 1, the civil aviation authority announced.

On October 7, the daily death toll hit an all-time high at 239 new fatalities, the health ministry reported. IRNA, the state media outlet, said that it would hold a joint webinar with Russia's Sputnik news agency to "exchange experiences in the face of the pandemic."

The US regime w/
- highest num of Covid19 cases & deaths;
- a superspreader at its head;
- a record of denial of the disease;
- & continued mismanagement of its impact,
has no standing to lecture others.

As long as sanctions r in place, your hypocritical offers sound hollow. https://t.co/hiZunDAcDM

On October 9, Iran stopped admitting non-emergency patients to hospitals due to the surge in coronavirus patients, the health ministry said. All military medical units were mobilized to assist in the fight against COVID-19, Rear Admiral Habibollah Sayyari said.

On October 11, the health ministry said that mask-wearing would be mandatory in "other large cities in the coming weeks."

On October 12, daily deaths from COVID-19 reached a record high of 272. Vaccine trials on human subjects would begin within weeks, the health ministry said.

On October 14, Iran imposed a three-day travel ban on five cities: Tehran, Karaj, Mashhad, Isfahan and Orumiyeh. The ban would run from October 17 to 19. The single-day death toll, 279 dead, broke record highs for the third time in a single week.

On October 16, Iran Air announced an emergency return flight home for any Iranian residing in Rome. The flight was scheduled for October 26. Iranians would have to purchase tickets before the flight. Italy recorded more than 5,000 new cases on October 9.

On October 17, the government extended its shutdown of Tehran for a third week. Schools, mosques, restaurant and businesses would remain closed until at least October 23. Iran's conventional armed forces prepared to make all military hospitals and medical centers available to coronavirus patients.

On October 19, Iran shattered its single day record with 337 deaths.

On October 21, Iran broke its daily record for new COVID-19 cases for the second consecutive day, with 5,616 new infections.

On October 22, the Central Bank urged the International Monetary Fund (IMF) to grant Iran emergency loans to fight the COVID-19 pandemic. Tehran first requested a $5 billion loan in March, but the Trump administration blocked the funds. Iran had not asked the IMF for a loan since the 1960s.

On October 24, Supreme Leader Khamenei recommended banning "unnecessary travel between cities" and "imposing strict regulations" on public transportation and public spaces. Rouhani echoed Khamenei's comments and added that the public must "comply" with health protocols to slow the latest outbreak.

On October 26, new lockdowns went into effect in 43 cities. Nearly all private businesses, religious institutions and government buildings would remain closed until November 20. Half of all public sector employees would work remotely. One Iranian was dying from COVID-19 every four minutes, State TV reported.

Corona's proven deadly, vicious & brutal everywhere, but it's worse in Iran as it has a cruel collaborator: US regime.
U.S. has elevated max pressure to Health Terrorism & targeted Iranian ppl w/ inhuman sanx while they're fighting the pandemic.

Andrew Hanna, a program specialist at the U.S. Institute of Peace, assembled this report