What You Need to Know about Iran’s Coronavirus Crisis

Iran’s outbreak has been the worst in the Middle East by far and there are concerns that the pandemic’s spread is significantly worse than reported by Iranian authorities. The virus hit at a particularly bad time for Iran with the economy already suffering from the impact of U.S. sanctions. USIP’s Garrett Nada discusses the debate over the number of cases, Tehran’s decision to ease containment measures, and whether the coronavirus crisis could open the door to de-escalation with the United States. 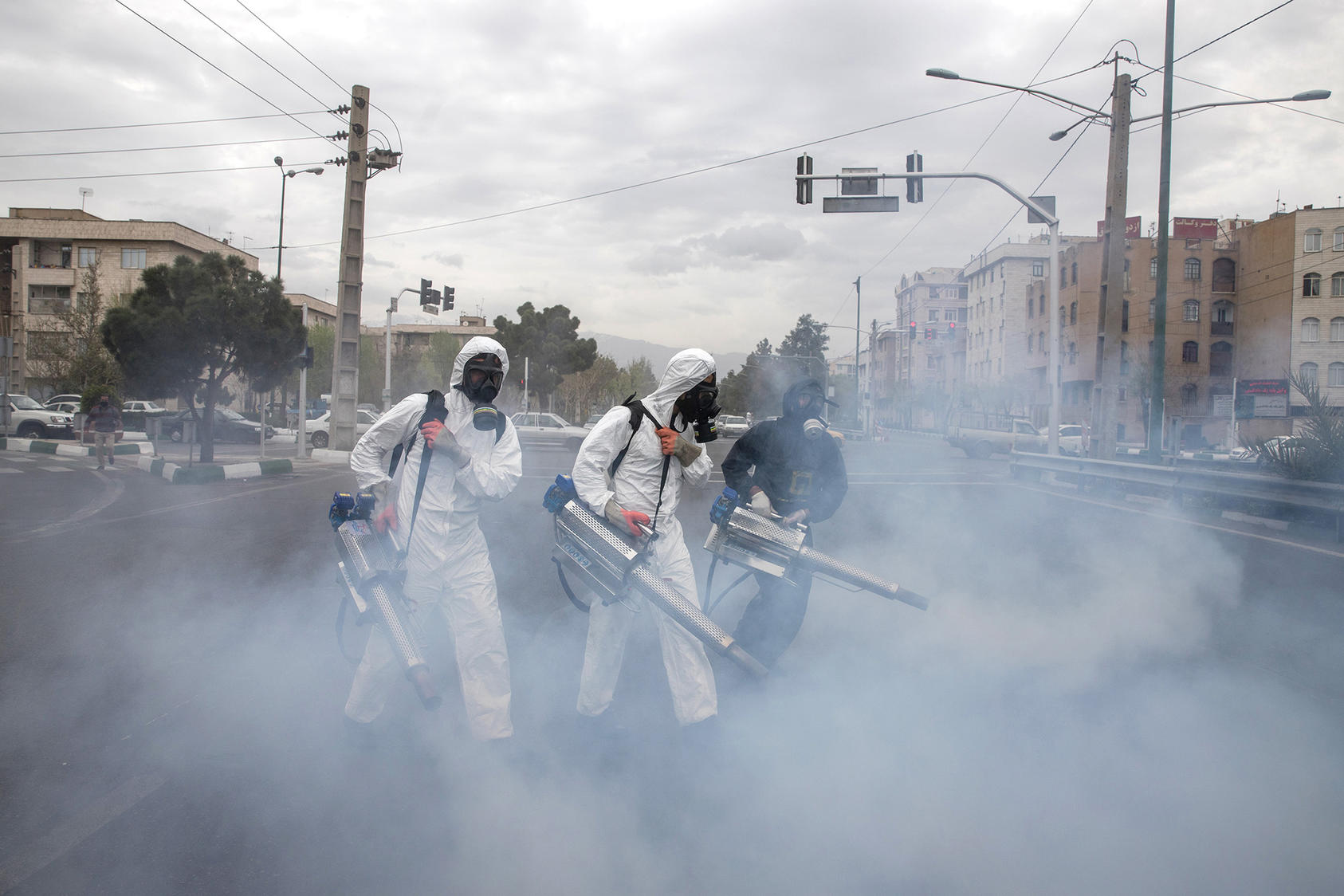 The Iranian government ignored and suppressed initial information about the spread of COVID-19, which has led to general mistrust regarding Iran’s officially reported figures. Do we have an accurate sense of the current situation in Iran?

By April 21, Iran had reported 84,802 cases across all 31 provinces, with 5,297 deaths. But its tally has been disputed since shortly after the first COVID-19 deaths were reported on February 19 in the holy city of Qom. On March 23, the U.S. State Department charged that the regime “is hiding a significant amount of information about the coronavirus outbreak. It is likely far worse than the regime is admitting. This lack of transparency poses a significant health risk to the Iranian people, as well as to Iran’s neighbors.”

Assessing the situation in Iran is difficult due to limited testing for the virus. The total number of cases could represent only about a fifth of the actual cases, said Rick Brennan, director of emergency operations for the World Health Organization, on March 16 after visiting Iran. “We've said the weakest link in their chain is the data. They are rapidly increasing their ability to test and so the numbers will go up.”

Iran has since upped production of test kits. But by April 21, only 365,723 tests had been performed on a population of more than 80 million. Health officials said more than 70 million people had been screened for symptoms through a government telephone line and a mobile phone application, but the results were not as useful because infected individuals do not necessarily exhibit symptoms.

On April 14, the research arm of Iran’s parliament estimated that the number of infections was likely to be eight to 10 times higher than the official statistics. Iranians who were infected but had mild or no symptoms were usually not tested and therefore not counted. When used in China, the RT-PCR tests—the same type used in Iran—were only reliable 67 percent of the time, experts said. The bulk of the 46-page report chronicled Iran’s response to the pandemic and outlined preparations for a second wave of infections, but the explosive estimate was in a lengthy footnote with no further explanation. If the estimate is correct, Iran would have 760,000 total cases—which could rank as the second highest in the world—in just two months.

The death toll also could be 80 percent higher than the Health Ministry tally, parliament reported. In mid-April, the official toll stood at more than 4,700, but the real number could have exceeded 8,500. The Health Ministry only counted patients who had died in hospitals and tested positive for the virus, experts noted. The report also warned that more than 30,000 people could die if Iran does not impose strict quarantines.

Deputy Health Minister Ali Reza Raisi acknowledged on April 15 that Iran’s limited testing capacity resulted in a gap between actual and reported numbers. “The real figures are more than the official statistics, but it is not correct to multiply official figures by two or three,” he said. Raisi did not directly address the report’s findings. But on the following day, the parliamentary think tank’s caretaker director, Mohammad Qassemi, accused foreign media of distorting the report’s findings. He said the report examined the sensitivity of the RT-PCR test, not the accuracy of official figures.

On April 11, Iran began reopening low-risk businesses and lifting some restrictions on travel. Why is Tehran easing containment measures now, despite the risk?

President Hassan Rouhani’s government has been under pressure to get the economy moving again after a two-month shutdown. The administration’s spokesperson, Ali Rabiei, warned that four million jobs could be at risk if the shutdown was prolonged. With U.S. sanctions in place, oil exports were down nearly 90 percent before the virus hit and global oil prices plummeted. Inflation, although on a downward trajectory, was still high at 22 percent in March. Unemployment averaged 10.6 percent from December 2019 through March of this year.

The disease prompted nationwide closures of businesses just before Nowruz, the Persian New Year, celebrated on March 20. Many businesses depend on the surge in sales during the two-week holiday period but were shuttered for Nowruz and several additional weeks.

The government announced several initiatives to provide relief to individuals and businesses impacted by the virus, but it lacked the resources for a longer-term stimulus. The urgency of the situation was reflected by Iran’s unprecedented request for a $5 billion loan from the International Monetary Fund (IMF) to help combat the outbreak. Iran last received IMF assistance between 1960 and 1962. But Washington planned to block Tehran’s request. “Unfortunately, the Iranian central bank, which is currently under sanction, has been a key actor in financing terrorism across the region and we have no confidence that funds would be used to fight the coronavirus,” a U.S. Treasury official told CNN.

Without significant outside help, Iran had little choice but to ease containment measures. On April 5, President Rouhani reported that the number of new cases and deaths had begun to decrease. He ordered a gradual reopening of the country based on the official figures. “Although the responsibility of the administration is to support the classes most at risk, at the same time it has a responsibility to provide all the necessary conditions for employment and business,” Rouhani said at a cabinet meeting on April 5.

Could this crisis open the door for de-escalation between the U.S. and Iran?

The COVID-19 outbreak has become the latest point of contention between Washington and Tehran. Iran has repeatedly called for the lifting of U.S. sanctions since the first COVID-19 deaths were reported on February 19. The disease spread quickly and severely challenged the health care system. On March 17, Foreign Minister Mohammad Javad Zarif charged that U.S. sanctions “literally kill innocents” because Iran found it difficult to procure supplies. Humanitarian goods—such as medical, educational, and humanitarian supplies—have always been exempt from U.S. sanctions. But foreign banks have been hesitant to finance business with Iran, limiting Iran’s ability to buy and ship goods not prohibited by sanctions.

On March 20, President Rouhani appealed directly to the American people for their help in pressuring President Donald Trump and Congress to lift economic sanctions on Iran. “Today, the Iranian people are harmed by both the deadly coronavirus and the callous U.S. government policy of economic terrorism inflicted on them,” Rouhani said in an open letter.

At the same time, other Iranian leaders have refused U.S. assistance. In a televised address, Supreme Leader Ayatollah Ali Khamenei rejected U.S. aid to help combat the coronavirus outbreak. “You might give us a medicine that would spread the disease even more or make it last longer,” he said on March 22. Khamenei also cited a baseless conspiracy theory that COVID-19 was developed in the United States to target Iranians based on their genetic makeup.

The United States has refused to lift sanctions on Iran, but it has taken steps to ensure that Iran can receive humanitarian aid. On January 30, before the virus hit, it set up a channel with Switzerland to allow companies based there to export aid to Iran without incurring financial penalties. On February 27, the U.S. Treasury granted a license allowing foreign companies to conduct certain humanitarian transactions with Iran's central bank, which was sanctioned by the United States in 2019. One day later, Washington offered Tehran humanitarian aid.

U.S. officials reiterated that Washington does not intend to hinder assistance to Iran. “There is no sanction on medicines going to Iran, there is no sanctions on humanitarian assistance going into that country. They’ve got a terrible problem there and we want that humanitarian, medical assistance to get to the people of Iran,” Secretary of State Mike Pompeo said on March 20. On April 2, President Donald Trump said the United States would be willing to send American medical professionals to help Iran. On April 19, Trump added that he would be willing to provide aid, such as ventilators, if Iran asked for it.

Since the outbreak, tensions between Iran and the United States increased in Iraq and the Persian Gulf. On March 11, dozens of Katyusha rockets were launched at Camp Taji base near Baghdad, wounding 14 and killing two U.S. and one British servicemembers. On March 13, U.S. forces struck sites belonging to Kataib Hezbollah, an armed group backed by Iran. On March 14, at least 25 rockets hit Camp Taji again. At least three American military personnel and two Iraqi soldiers were injured. On April 15, the United States accused Iranian military vessels of conducting “dangerous and harassing” maneuvers close to U.S. Navy and Coast Guard ships in the Persian Gulf.