In a televised address, Supreme Leader Ayatollah Ali Khamenei rejected U.S. aid to help combat the coronavirus outbreak. “You might give us a medicine that would spread the disease even more or make it last longer,” he said on March 22. Khamenei also cited a baseless conspiracy theory that COVID-19 was developed in the United States to target Iranians based on their genetic makeup. Earlier in March, Chinese government spokesman Lijian Zhao tweeted another conspiracy theory that the U.S. army might have brought the virus to Wuhan.

Khamenei also said he was suspicious of the offer, given the reported shortage of tests and medical equipment in the United States. “If you have something, use it for your own patients,” he added. Khamenei’s speech marked the holiday of Eid al Mab’ath, which celebrates the first revelation of the Prophet Mohammed. 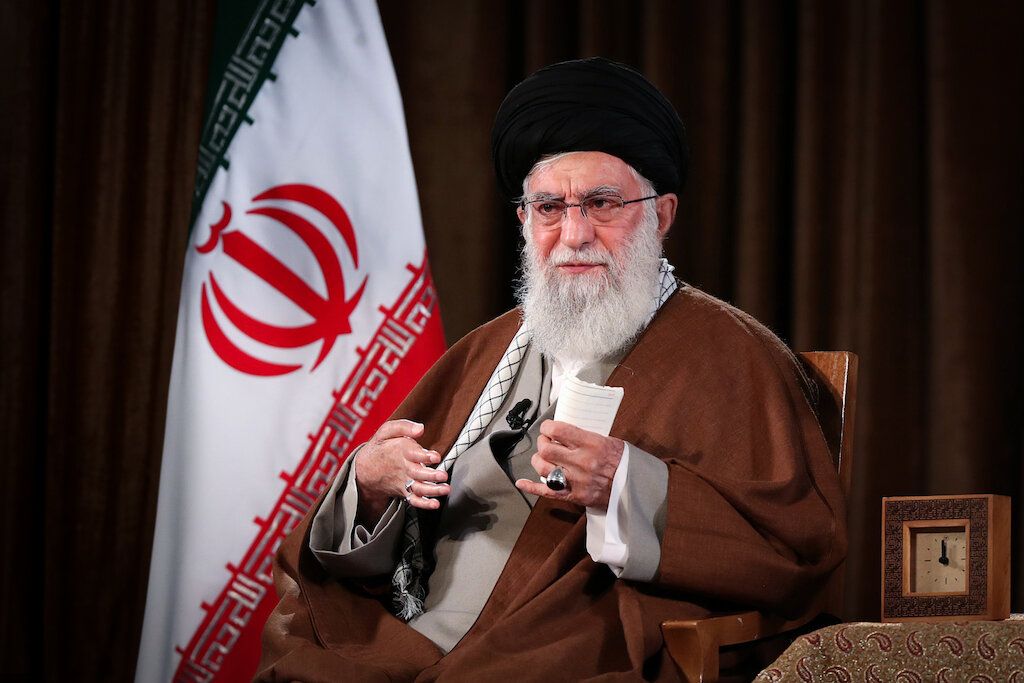 President Donald Trump told reporters that he had written Iran offering aid. On March 22, he said he had also written the leader of North Korea and to many other countries. The remarks by Khamenei and Trump came two days after President Hassan Rouhani published an open letter to the American people, urging them to push Congress and Trump to lift economic sanctions on Iran. Rouhani and other Iranian leaders have blamed U.S. sanctions for hampering their efforts to combat the virus.

A day after Khamenei’s remarks, Secretary of State Mike Pompeo criticized the Iranian leader for rejecting U.S. assistance. The supreme leader “prioritizes ideology over the Iranian people,” he said in a statement. Pompeo warned that Khamenei’s “fabrications regarding the Wuhan Virus are dangerous and they put Iranians and people around the world at greater risk.” Pompeo also alleged that Tehran withheld information about the first death from COVID-19 for nine days and was underreporting the number of deaths from the virus. The following is an excerpt from Khamenei’s address, Pompeo’s response and a State Department fact sheet on Iran's lack of transparency.

“The Americans have said several times that they are willing to help us in terms of medication and in treating the Coronavirus. This is very surprising. First of all, according to what your own officials have said, you have shortages in trying to prevent this disease, and you also have shortages in medications and in treating this disease. If you have something, use it for your own patients. Secondly, you are accused of having created this virus. I do not know how accurate this claim is, but considering the circumstances that exist, which reasonable individual can trust you? You might give us a medicine that would spread the disease even more or make it last longer. Some people even say that some forms of the virus are particular to Iranian genes and thus produced on the basis of genetic science.”

Supreme Leader Khamenei’s fabrications regarding the Wuhan Virus are dangerous and they put Iranians and people around the world at greater risk. Facts matter. Here are a few the Iranian regime would like to keep from the world:

Fact: The Iranian regime ignored repeated warnings from its own health officials, and denied its first death from the coronavirus for at least nine days. The regime continues to lie to the Iranian people and the world about the number of cases and deaths, which are unfortunately far higher than the regime admits.

Fact: As Iranian regime officials ask for more funds, it is important to note that since 2012, Iran has spent over $16 billion on terror abroad, and used sanctions relief from the JCPOA to fill up its proxies’ coffers. Regime officials stole over a billion Euros intended for medical supplies, and continue to hoard desperately needed masks, gloves, and other medical equipment for sale on the black market.

Fact: U.S. sanctions do not target imports of food, medicine and medical equipment, or other humanitarian goods. Iranian documents show their health companies have been able to import testing kits without obstacle from U.S. sanctions since January.

Fact: The United States has offered over $100 million in medical assistance to foreign countries, including to the Iranian people, and our scientists are working tirelessly to develop a vaccine. Khamenei rejected this offer because he works tirelessly to concoct conspiracy theories and prioritizes ideology over the Iranian people.

•    Iran’s lack of transparency about its coronavirus outbreak has resulted in a catastrophic public health risk to the Iranian people, as well as to Iran’s neighbors.

•    Instead of halting flights to China when the risk of contagion was clear, the regime threatened and imprisoned dozens of Iranians who told the truth about the outbreak. The regime encouraged large public gatherings to try to bolster its legitimacy, with no regard for the health risk to Iranian citizens.

•    The regime is hiding a significant amount of information about the coronavirus outbreak. It is likely far worse that the regime is admitting. This lack of transparency poses a significant health risk to the Iranian people, as well as to Iran’s neighbors.

•    Reports that COVID-19 has spread to Iranian prisons are deeply troubling and demand nothing less than the full and immediate release of all American citizens. Their detention amid increasingly deteriorating conditions poses a serious health risk and undermines their basic human dignity.

•    U.S. sanctions are not preventing aid from getting to Iran. The United States maintains broad authorizations that allow for the sale of food, agricultural commodities, medicine, and medical devices by U.S persons or from the United States to Iran.

•    The media should know better than to believe and propagate Chinese and Russian propaganda that misleads the public into believing U.S. sanctions are to blame.

•    Now, regime officials make false claims that the U.S. engineered the virus - focusing their time and resources attempting to deflect blame instead of taking responsibility and providing for the health, prosperity, and rights of Iranians, who deserve far better.

•    Instead of taking appropriate precautions against the spread of COVID-19, Iran’s terrorist airline, Mahan Air, operated at least 55 flights between Tehran and China in February, according to public reports.

•    On February 10, Deputy Health Minsiter Ali-Reza Raisi told reporters: “I declare that there are no cases of coronavirus in the country and our citizens should only follow news released by the Health Ministry on the coronavirus." The same day, a 63-year-old Iranian woman died from the coronavirus.

•    The Iranian regime only admitted that coronavirus had entered Iran on February 19, nine days after the first reported death.

•    On March 5, the head of Iran’s cyber police announced the arrest of 121 Iranians for “spreading rumors” about the coronavirus. The regime also reportedly threatened medical staff against revealing accurate statistics of coronavirus cases and deaths.

•    In March, the head of the IRGC, Hossein Salami, claimed the spread of COVID-19 in Iran might be due to a U.S. biological attack, and an advisor to the Speaker of the Iranian Parliament claimed coronavirus was being used as biological warfare by the United States.

•    On March 12, Ayatollah Khamenei falsely claimed that there is evidence that COVID-19 might be a "biological attack."

•    On March 17, Iran Foreign Minister Javad Zarif falsely claimed U.S. sanctions are killing Iranian "innocents" with its sanctions. He failed to note the Department of State has offered aid through Switzerland dating back to February.

•    The Chinese Foreign Ministry has also falsely accused the United States of hampering Iran’s epidemic by not lifting sanctions. In fact, on February 28, the Department of State offered aid to specifically address the spread of COVID-19 in Iran, an offer that was conveyed to Iran through the government of Switzerland and rejected by the regime.