Iran has scrambled to deal with the mounting death toll from the COVID-19 pandemic amid claims that it is seriously underreporting the numbers. In February and March video and satellite images showed mass graves dug in Qom, the epicenter of the outbreak, to keep up with the pace of deaths. A lawmaker in the holy city accused the government of dishonesty on the death toll. Local media reported that victims of the virus were being buried in a special section.

In general, the total number of cases could represent only about a fifth of the actual cases, said Rick Brennan, director of emergency operations for the World Health Organization, on March 16 after visiting Iran. “We've said the weakest link in their chain is the data. They are rapidly increasing their ability to test and so the numbers will go up.” On March 23, the U.S. State Department charged that the regime “is hiding a significant amount of information about the coronavirus outbreak. It is likely far worse that the regime is admitting. This lack of transparency poses a significant health risk to the Iranian people, as well as to Iran’s neighbors.”

The mortality rate fluctuated—sometimes wildly—as the number of cases mounted. On February 24, just five days after the government announced the first two deaths, it was 25 percent. A month later, on March 24, with 24,811 cases and 1,934 deaths, the mortality rate was 7.8 percent. But it has consistently been higher than the 3.4 percent global death rate estimated by WHO.

Funerals have become surreal in #Iran with #COVID19 spreading fast while people try to maintain #SocialDistancing.
Iran official death toll from #coronavirus is at 1,934 with total number of people diagnosed at 24,811.
(Funeral in Zanjan — Photos by Nima Bigdely) pic.twitter.com/xQKD0kizM0

Iran originally traced the outbreak in Qom to China, variously citing Chinese students attending a Qom seminary and an Iranian merchant who traveled to Wuhan. But the commander of the Revolutionary Guards, Brigadier General Hossein Salami, implicated the United States. “It is possible that this virus is a product of a biological attack by America which initially spread to China and then to Iran and the rest of the world,” he said on March 5. The supreme leader implied that the United States may have created the virus. The following is a timeline detailing reports on Iran’s COVID-19 death toll.

Growing Evidence of Death from COVID-19

On February 24, a lawmaker from the holy city of Qom accused the Health Ministry of dishonesty. He claimed Qom had already seen 50 deaths from the virus while the government had reported only 12 deaths nationwide. The deputy health minister, Iraj Harirchi, denied the higher figure.

On February 25, the Young Journalists Club, an Iranian news agency, reported that special graves for coronavirus victims were being dug at the Behesht-e Masoumeh cemetery in Qom. A municipality official denied rumors about a lack of transparency regarding burials of victims.

Men wearing protective gear placed caskets in what appeared to be a newly dug row of graves at Behesht-e Masoumeh cemetery in Qom. The narrator, in a video that seemed to be filmed on February 28, said the section was for coronavirus victims. He said 80 people had already been buried there, but that the government had only reported 34 deaths.

On February 29, Tabnak news agency reported that the Behesht-e Masoumeh cemetery was designated for all of Qom’s COVID-19 victims because of its sanitary conditions, including cold storage.

On March 1, another video appeared to show a newly dug mass grave in Marvdasht in Fars province. Under Islamic custom, the dead are supposed to be interred within 24 hours.

On March 2, another indication of the scale of death emerged in a secret video taken of bodies awaiting burial. It showed dozens of body bags at the Behesht-e Masoumeh cemetery in Qom. The person who shot the video on March 2 claimed the individuals died from the coronavirus. “As you can see these are the bodies that have been processed, but unfortunately the number of dead is high and growing,” the narrator said. The clip was first shared by anonymous Iranian blogger Vahid Online and then posted by the BBC on March 3.

State media later reported that the person who filmed the footage was arrested within days of sharing it. A deputy prosecutor in Qom warned that publishing false or unauthorized images about the outbreak was prohibited.

On March 3, a worker at Behest-e Masoumeh cemetery told an interviewer that more than 250 victims had been buried, far more than the 77 dead reported that day in the whole nation. The video was later published by The Washington Post.

On March 5, Mehr News Agency published a video report from the Behesht-e Masoumeh cemetery noting the “large” number of graves dug in a separate section for coronavirus victims. 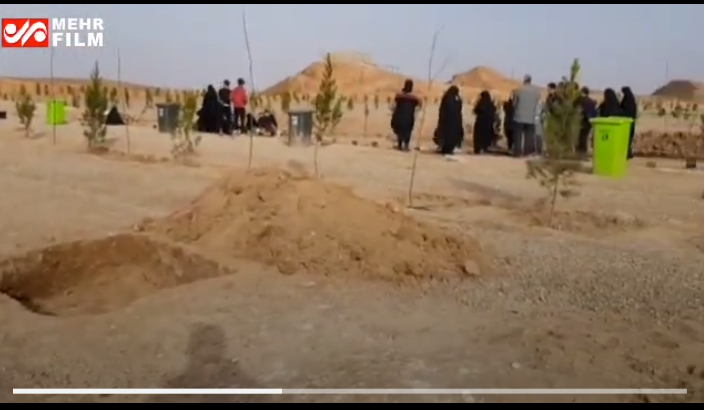 On March 12, The Washington Post published an analysis of satellite imagery from Maxar Technologies showing that graves were dug at the Behesht-e Masoumeh cemetery two days after Iran reported its first cases on February 19. By the end of the month, two trenches—with the combined length of a football field—were visible from space.

On March 18, the rising death toll prompted the Health Ministry to issue new burial protocols, which limited the number of attendees at funerals and forbid the washing of bodies as prescribed by Islamic custom.

On March 18, the Los Angeles Times reported on a case in which authorities seemed to have lied about the cause of death of a woman. Maryam Rahmati was told that her family would not be allowed to bury her mother, who died in Gonbad Kavus city in early March. The death certificate said her mother died from a heart attack, so her family did not suspect coronavirus had been the cause of death. The family made a deal with the municipality, which allowed them to bury the body themselves in exchange for about $2,150.

Rahmati’s aunt participated in the ritual washing of the body, and her brother jumped into the grave to hug his mother once last time. After the funeral, attended by 50 people, Rahmati’s four aunts, father and husband all tested positive for the virus.

The Los Angeles Times also reported on changes at the Baqi Cemetery in Qom. Meysam Behroom, a political science student, said that there appeared to be a mass grave at the cemetery. “In my last visit before my friend’s funeral, half of the cemetery was empty land and the graves were spaced but now it’s completely dug up,” he said.

On March 18, an anonymous Twitter user shared a picture from what she said was her uncle’s funeral. The mourning family members appeared to be standing far apart from each other, perhaps to avoid risk of transmitting COVID-19.

A user from #Iran (@odmilov1) shares a picture of his uncle's funeral. He lost his life to the #CoronaVirus. The relatives are performing the last prayer (نماز میّت) in front of the ambulance carrying the body. Socially distant, they stood under the rain "crying on their own." pic.twitter.com/CoZ0Vb9LZl

On March 18, Mehdi Variji died after he said he was not feeling well in a video posted on social media. He reported that his fever would not let up. On March 21, a video of the doctor’s funeral showed cemetery staff in protective gear.

The burial of Dr. Mehdi Variji, who lost his life while treating #Covid19 patients in a Tehran’s district 21. He is buried next to his father who martyred during 1980s war. Unlike his father, no one is at his burial service. pic.twitter.com/0tA38EGdN3

On March 23, state-controlled state media reported that IRGC commander Hossein Asadollahi died of injuries from chemical weapons used by Iraq during the 1980-1988 war. Asadollahi also had commanded Iranian forces fighting in Syria to bolster the Assad regime. His funeral attracted a massive crowd. In a tweet, a health ministry spokesperson warned that such large gatherings could spread COVID-19.

The State Department issued a fact sheet disputing Iran’s claims on the scope of its COVID-19 crisis. It claimed Iran was withholding a “significant amount of information” about the outbreak. “This lack of transparency poses a significant health risk to the Iranian people, as well as to Iran’s neighbors,” the State Department warned.