Year One: Raisi on the Economy

In his first year in office, President Ebrahim Raisi pledged to stabilize the economy, address people’s basic needs, fight corruption and to better manage water and gas resources. Raisi took weekly trips to the provinces after he took office in August 2021 to learn about the problems facing average Iranians and to reassure them. But Raisi’s policies have failed to improve the livelihoods of most Iranians. 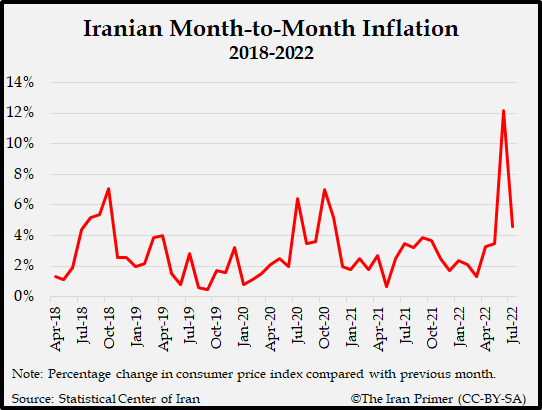 In May 2022, the government implemented economic reforms intended to help consumers, but prices of bread and other staples spiked. Protests broke out in several provinces. In 2022, Iranians also demonstrated over salaries, taxes and corruption.

Raisi set a target of eight percent growth in his budget for the Iranian year that began in March 2022. The International Monetary Fund, however, has projected only three percent growth. In August 2022, inflation was at 52.2 percent compared to a year earlier.

Raisi, unlike his predecessor, does not view the restoration of the 2015 nuclear deal as vital to mitigating the biting impact of U.S. sanctions. Raisi has pledged not to tie the economy to the whims of foreigners. Instead, he and his advisors have promoted the “resistance economy” model of self-reliance. The following are Raisi’s comments on the economy.

In a televised interview on May 9, 2022: “With the efforts of the government, the worries about the stocks of basic goods were eliminated in a short period of time.”

“Today, the amount of oil sales in the country has doubled since the beginning of the government [term in office], and we no longer have to worry about this.”

"On the other hand, the volume of the country's foreign trade, especially with neighboring countries, has increased and the total foreign trade of the country has reached $100 billion, which in this regard, the situation is completely different from before.”

“With the efforts of our colleagues in the government, without borrowing from the central bank or creating money, we were able to earn new income by solving new problems.”

“Many economists believed that the growing trend of inflation in year 1400 [2021-2022] would increase to 60 percent from 40 percent, but thank God, with the measures taken to curb the problems, inflation fell to 36 percent at the end of last year.”

“The government considers itself people's servant. This must be done as a necessity for economic reform, and of course one should not run away from a difficult decision and be terrified of it. Thank God, this issue [subsidies on basic goods] is considered by the government, the parliament and the judiciary as an economic reform.”

“Today, everyone believes that the subsidized exchange rate or having two or more exchange rates must be resolved one way or another, but there are some disagreements on when to do it, which is fine.”

“This subsidy was being given to the importer until today, which has made some problems that everyone knows. This must be given to the last chain of the supply chain, which is the consumer, so that they can manage it on their own.”

“The subsidies that are allocated to medicine will be given to the insurance companies, and they will provide people with medicine with the same price it used to be.”

“These coupons [for basic goods] are a way towards more justice, and they will not lead to the increase in prices.”

“The Consumer Protection Organization is obliged to announce the price of goods, and the supervisory bodies will seriously monitor the process.”

“From the first day in office, I knew that I had to make tough decisions and sometimes put my reputation on the line so that people's livelihood is not abused by abusers.”

“One of the wishes that people and governments have always had was public [health] insurance. Today, we can say that with these five million people who are now covered by insurance, a great move has taken place in the insurance system.”

In a televised interview on Dec. 6, 2021: “The supply of basic goods has reached an acceptable level that we no longer have any worries about the stocks of basic goods in the country.”

“To increase liquidity, one must be sensitive to any action that creates inflation in society. The 1401 budget is now under discussion in the government, and all our efforts are aimed at regulating budget structures in a way that can be anti-inflation. A report we have from statistical centers during this period indicates that inflation has been controlled and is declining.”

“Our policy with the countries of the world is an active and maximum policy, with priority given to neighbors and countries in the region. In this regard, during this 100-day period, I had face-to-face and telephone communication with these countries, stressing that the Islamic Republic of Iran is determined to develop political, economic, social and cultural relations with the world.”

“In this summit (Shanghai Cooperation Organization summit in September), we met with the heads of state. In these meetings, it was emphasized that our relations should develop because none of these countries and we ourselves were satisfied with the status quo of relations.”

“I took a statistic from the Ministry of Foreign Affairs and saw that trade [with Tajikistan] has tripled to this day after a relatively short time.”

“We had problems with Turkmenistan for five years, so following this visit, the relations between the two countries were reconsidered, as well as the issue of Iran's transit and the issue of gas swaps between Iran, Turkmenistan and Azerbaijan. This can introduce Iran as a regional hub.”

“In Turkmenistan, we had a meeting with economic activists who work there and were dissatisfied for two years.... I promised them that I would follow the revival of the gas contract so that their work would take place. The same was the case in Azerbaijan and other countries.”

In a speech on the National Day of Industry and Mining on July 2, 2022: “The popular administration, following the emphasis of the Supreme Leader and the needs of the country's economic development, should support production, try to remove obstacles to production, and emphasize the development of exports.”

“The enemy is trying to hold the country back and weaken the components of power creation, of which production is one of the most important. Our duty against these efforts is to support producers and economic actors as officers of this field.”

“Knowledge-based products have the ability and capacity to be more competitive in the global and domestic markets.”

“The future must be predictable for economic and industrial actors so that they can plan for it.”

“The government should leave aside its management of the economy and be in the position of guidance, support and supervision.”

“Work should be handed over to the private sector and the government should reduce its responsibilities and increase its monitoring and support.”

During a press conference on Aug. 29, 2022: “If some decisions had been taken and implemented in the past 43 years with responsibility and at the right time, perhaps our situation would have been different from the current situation, especially in the economic fields.”

“Despite the budget deficit in 1400 [2021-2022], this problem was solved without borrowing from the central bank and without printing money. In Shahrivar 1400 [August-September 2021], we had almost 60 percent inflation, so the first step was to control the government itself so that inflation would not increase twice with inflationary measures.”

“We reached a point where we saw that with the government's economic measures in March and April, the rate of inflation decreased, but the economic reforms in May caused a new 12 percent [increase in] inflation".

“The direction of liquidity towards production has begun. $17 billion have been invested by economic drivers and banks in the country, and in coordination with the private sector and the formation of consortia, an investment of $19 billion will also be made.”

“Subsidy allocation was transferred from the beginning of the payment chain to the end of the chain and was given to the consumer; this was a big change. All the economists believed that the multi-rate currency is not desirable and it will definitely cause rent and corruption, so with the help of God and people's support, these reforms were carried out and the people really defeated the enemy.”

“Current inflation is 40.5 percent, but in September of last year, there was nearly 60 percent inflation in the country. The government is determined to control and reduce inflation.”

In an address at the Shanghai Cooperation Organization Summit on Sept. 17, 2021: “Sanctions or economic terrorism is another challenge that has become the most important tool of the hegemons to impose their will on others. Sanctions or economic terrorism are key obstacles to promoting regional harmony. The SCO needs to design structures and mechanisms for a collective response to sanctions. Unilateral sanctions are not limited to one country but, as it has become clear in recent years, include more independent countries, especially members of the Organization. It is important and necessary to design mechanisms for collective confrontation with unilateral sanctions in the framework of this organization.”

In his inauguration speech on Aug. 5, 2021: “We consider ourselves committed to the ideals of the revolution and to eradicating rent-seeking and making the economy resistant to reduce inflation, strengthen the national currency, create stability in the field of economy, make efforts to attain self-sufficiency, address people's basic needs, make technological and scientific progress, optimally manage water and gas resources, and protect the environment.”