On December 5, President Ebrahim Raisi said that he was prioritizing the health and livelihood of Iranians. “Today, on the 100th day of the government, I have to announce that more than 100 million doses of [COVID-19] vaccine have been injected,” he said in a live television interview. “Today we thank God that the death toll has dropped dramatically.” But he still urged Iranians to comply with health protocols to prevent a sixth wave of infections. Raisi said that the government's vaccination campaign enabled more than 100,000 businesses to reopen.

On the economy, Raisi said that inflation, high prices and tax evasion were his main challenges. “The government is doing everything to achieve economic stability and a predictable market,” he assured. In November 2021, the annual inflation rate was 35.7 percent, according to the Statistical Center of Iran. Inflation for food and non-alcoholic beverages was even higher, with annual inflation at 47 percent.

Economic uncertainty has led to volatility in the value of Iran’s currency, the rial, in 2021. On December 4, Iran’s rial dropped one day after major powers and Iran paused talks on restoring the 2015 nuclear deal. One U.S. dollar was reportedly selling for 302,200 rials on the open market. The rate approached the historic low of 320,000 rials to the dollar reached in October 2020 amid the COVID-19 pandemic, low oil prices and U.S. sanctions.

Raisi said that his government was working to neutralize the negative impact of U.S. sanctions while trying to get them lifted through diplomacy. But he emphasized that the economy and budget for the coming Iranian fiscal year, which begins in March 2022, would not be tied to the nuclear talks in Vienna. The following are excerpted remarks by topic from the interview.

On the Economy and Trade

“To increase liquidity, one must be sensitive to any action that creates inflation in society. The 1401 budget is now under discussion in the government, and all our efforts are aimed at regulating budget structures in a way that can be anti-inflation. A report we have from statistical centers during this period indicates that inflation has been controlled and is declining.”

“Our policy with the countries of the world is an active and maximum policy, with priority given to neighbors and countries in the region. In this regard, during this 100-day period, I had face-to-face and telephone communication with these countries, stressing that the Islamic Republic of Iran is determined to develop political, economic, social and cultural relations with the world.” 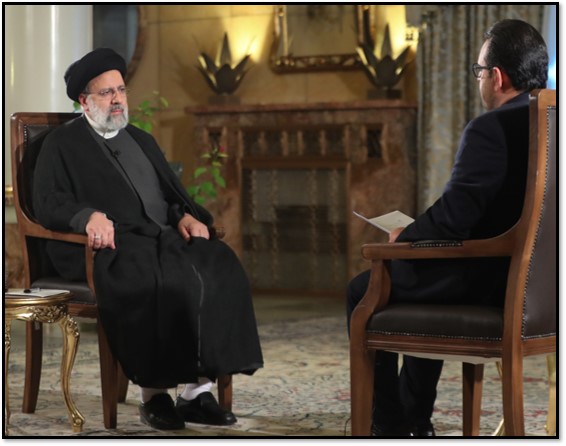 “In this summit (Shanghai Cooperation Organization summit in September), we met with the heads of state. In these meetings, it was emphasized that our relations should develop because none of these countries and we ourselves were satisfied with the status quo of relations.”

“I took a statistic from the Ministry of Foreign Affairs and saw that trade [with Tajikistan] has tripled to this day after a relatively short time.”

“We had problems with Turkmenistan for five years, so following this visit, the relations between the two countries were reconsidered, as well as the issue of Iran's transit and the issue of gas swaps between Iran, Turkmenistan and Azerbaijan. This can introduce Iran as a regional hub.”

“In Turkmenistan, we had a meeting with economic activists who work there and were dissatisfied for two years.... I promised them that I would follow the revival of the gas contract so that their work would take place. The same was the case in Azerbaijan and other countries.”

On the Nuclear Talks

“Regarding the negotiations, we started two things from the beginning of the [new] government. One was the neutralization of the sanctions for which we have a headquarters (special office), and the First Vice-President is responsible for this and is pursuing the neutralization of the sanctions. Second is the issue of lifting sanctions, which is also on the government's agenda.”

“They [Western powers] thought that we would not take an initiative. Thank God, today it was proved to the entire world that Iran both participated in the negotiations powerfully and with pride, and presented two texts; both on the nuclear issue and on the sanctions, so things are in line with what is stipulated in the Joint Comprehensive Plan of Action (JCPOA).”

“We do not relate our economy, that is our 1401 (Iranian fiscal year starting in March 2022) budget, to these issues in any way.”

On the COVID-19 pandemic

“One of the most important tasks and issues facing the government was to protect people's lives.”

“On the day of the presidential endorsement ceremony, I announced that the first issue that the government faced was coronavirus and the need for public vaccination.”

“The most important thing was the damage done to the hope and trust of the people, and one of the duties of the government was to restore this hope and trust.”

“Given these circumstances, we have made public vaccination a priority for the government, and today we thank God that the death toll has dropped dramatically.”

“Today, on the 100th day of the government, I have to announce that more than 100 million doses of vaccine have been injected.”

“The conditions have been created for us to reopen schools and universities... more than 100,000 closed businesses have started again, but everyone must comply [with health protocols], because it is possible that another wave [of infections] is ahead.”

“The issue of water is a crisis and the issue of drought is not only [relevant] for one province and not even for Iran and for the whole region and the world. But in any case, water management is very important for us. We told the officials that they should take a different action than in the past and get involved in the issue. Praise be to God, the Minister of Energy went to Isfahan [province] and Chaharmahal and Bakhtiari [province]... so the issue is being investigated.”