On October 18, the global ban on the sale of conventional arms to Iran expired and opened the way for the Islamic Republic to import weapons, including warplanes and helicopter gunships, missiles, tanks, artillery and other weapon systems. The ban was imposed by U.N. Resolution 1929 in 2010. It was lifted as part of the 2015 nuclear deal – enshrined in U.N. resolution 2231 – as one of the incentives for Tehran to cooperate on its nuclear program. Iran was also allowed to export its domestically produced arms for the first time in a decade.

Iran hailed the expiration of the arms embargo. “As of Sunday, we can purchase or sell arms from and to anyone we desire,” President Hassan Rouhani said. He noted that the United States had failed to extend the arms embargo in a new U.N. resolution. “Today is a momentous day for the international community ... in defiance of the U.S. regime’s effort,” Iran’s foreign ministry said in a statement. In a tweet, Foreign Minister Mohammad Javad Zarif said “normalization of Iran’s defense cooperation with the world is a win for the cause of multilateralism and peace and security in our region.”

A momentous day for the international community, which— in defiance of malign US efforts—has protected UNSC Res. 2231 and JCPOA.

Today's normalization of Iran’s defense cooperation with the world is a win for the cause of multilateralism and peace and security in our region. pic.twitter.com/sRO6ezu4OO

In April, the Trump administration launched a diplomatic initiative at the United Nations to extend the embargo on the sale of conventional arms indefinitely. But on August 14, the Security Council roundly rejected the U.S. resolution in one of the worst diplomatic defeats ever for Washington. Only two countries (the United States and the Dominican Republic) on the 15-member council voted for the resolution; two (Russia and China) rejected the resolution, and 11 nations abstained. To win passage, a Security Council resolution needs nine votes in favor and no vetoes from the Council’s five permanent members – Britain, France, China, Russia and the United States. In September, after the U.N. vote, the United States unilaterally reimposed U.N. sanctions despite criticism for other world powers.

As the embargo expired in mid-October, Secretary of State Mike Pompeo threatened to sanction any individual or company that supports Iran’s conventional weapons program. “Any nation that sells weapons to Iran is impoverishing the Iranian people by enabling the regime’s diversion of funds away from the people and toward the regime’s military aims,” he warned in a statement.

Statement by Iran’s foreign ministry on October 18, 2020: “Today is a momentous day for the international community, which in defiance of the U.S. regime’s efforts, has protected UN Security Council Resolution 2231 and the Joint Comprehensive Plan of Action (JCPOA).

As of today, all restrictions on the transfer of arms, related activities and financial services to and from the Islamic Republic of Iran, and all prohibitions regarding the entry into or transit through territories of the United Nations Member States previously imposed on a number of Iranian citizens and military officials, are all automatically terminated.

In one of the JCPOA’s innovations, the definitive and unconditional termination of arms restrictions and travel bans requires no new resolution, nor does it require any statement or any other measure by the Security Council. The lifting of arms restrictions and the travel ban were designed to be automatic with no other action required. This was achieved after painstaking negotiations, and with a prescient anticipation of the possibility of a breach of obligations by one or more of the other parties to the JCPOA. The very same procedure is applied for the termination of missile-related restrictions in the year 2023, and the subsequent conclusion of ‘consideration of the Iranian nuclear issue’ in the Security Council in the year 2025.

“Therefore, as of today, the Islamic Republic of Iran may procure any necessary arms and equipment from any source without any legal restrictions and solely based on its defensive needs, and may also export defensive armaments based on its own policies. It should be underlined here that rejecting imposition in any form is the cornerstone of Iran’s foreign policy. Therefore, the imposition of any restriction on any field—including finance, the economy, energy, and armaments—has never been recognized by Iran.

“At the same time, Iran’s defense doctrine is premised on strong reliance on its people and indigenous capabilities. Ever since the eight-year imposed war on Iran by Saddam Hussein’s regime—during which the Iranian people were victims of sophisticated and lethal weapons provided to Saddam by the West while Iran was deprived of procuring even the most basic defensive weaponry—the Islamic Republic of Iran has provided for its defensive needs through indigenous capacities and capabilities. This doctrine has been and will continue to be the principal driver behind all measures of the Islamic Republic of Iran in maintaining its strong defensive power. Unconventional arms, weapons of mass destruction and a buying spree of conventional arms have no place in Iran’s defense doctrine. The country’s deterrence stems from native knowledge and capability, as well as our people’s power and resilience. In contemporary history Iran—despite its power disparity—has never started a war.

#Iran’s defense doctrine is premised on strong reliance on its people and indigenous capabilities... This doctrine has been and will continue to be the principal driver behind all measures of the Islamic Republic of Iran in maintaining its strong defensive power. pic.twitter.com/kRxLtcLtYs

“Regrettably lucrative weapon deals—concluded mainly between Western powers and some regional countries—have contributed greatly to, and aggravated commission of, war crimes in the region, including the ongoing aggression against the Yemeni people.

“Notwithstanding the failed attempts by the U.S. to withhold and eliminate Iran’s benefits from Resolution 2231, Member States are required to make their laws and regulations compatible with the resolution, which 'invites Member States to give due regard to these changes.' The Islamic Republic of Iran draws the attention of all Member States to the unambiguous provisions of the Resolution 2231 and its relevant timetables.”

“The United States, whose unlawful and malign subterfuge in its attempts to further violate a UNSC Resolution have been categorically rejected several times in the past three months by the Security Council, must abandon its destructive approach vis-à-vis Resolution 2231; return to full compliance with its commitments under the United Nations Charter; stop violating international law and ignoring international order, and cease further destabilization in the West Asia region.

The United States, whose unlawful and malign subterfuge in its attempts to further violate a UNSC Resolution have been categorically rejected several times in the past three months by the Security Council, must abandon its destructive approach vis-à-vis Resolution 2231... pic.twitter.com/6A5S6R79bG

“It is evident that any measure against the provisions of UNSC Resolution 2231—particularly paragraph 1 and its defined timetables—will amount to a material breach of the resolution and the purposes of the JCPOA. In that event, the Islamic Republic of Iran reserves the right to take any necessary countermeasures to secure its national interests.”

Iranian Foreign Ministry spokesperson Saeed Khatibzadeh on October 12: “Over recent years, Russia has been one of Iran's main partners in the defense and military fields. Now, with the lifting of arms restrictions, the two countries can enhance the prospects for military cooperation.”

“Negotiations between Tehran and Moscow are ongoing within the framework of a joint commission for military cooperation. Partnership programs between the two countries’ authorities are developed through it, including those related to regional and international issues.”

5 years after Adoption Day of JCPOA—& in accordance with UNSCR 2231—illegal arms restrictions on Iran are now terminated.

As of today, Iran's arms trade needs no prior consent from UNSC.

The US tried to prevent this but it failed, as the UNSC rejected all US efforts.

Statement by Secretary of State Mike Pompeo on October 18, 2020: “On September 19, virtually all UN sanctions on Iran returned, including re-imposition of the UN arms embargo. Accordingly, the export of certain conventional arms to Iran is a violation of UN Security Council Resolution (UNSCR) 1929 and the procurement of any arms or related materiel from Iran is a violation of UNSCR 1747. The United States is prepared to use its domestic authorities to sanction any individual or entity that materially contributes to the supply, sale, or transfer of conventional arms to or from Iran, as well as those who provide technical training, financial support and services, and other assistance related to these arms. 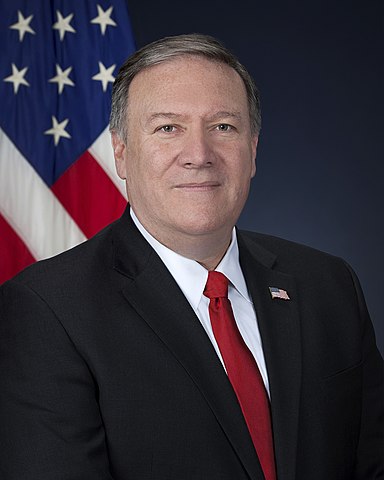 “Every nation that seeks peace and stability in the Middle East and supports the fight against terrorism should refrain from any arms transactions with Iran. Providing arms to Iran will only aggravate tensions in the region, put more dangerous weapons into the hands of terrorist groups and proxies, and risk increasing threats to the security of Israel and other peaceful nations. For the past 10 years, countries have refrained from selling weapons to Iran under various UN measures. Any country that now challenges this prohibition will be very clearly choosing to fuel conflict and tension over promoting peace and security.

“The United States desires peace with Iran and hopes for the day when its leaders share that goal. When the regime’s leaders abandon their dreams of exporting revolution, they will find a welcoming and generous partner in Washington.”