The U.N. ban on conventional arms sales to Iran expired on October 18, 2020. It opened the way for Iran to import weapons – including battle tanks, armored combat vehicles, large caliber artillery systems, combat aircraft, attack helicopters, warships, missiles or missile systems and spare parts – for the first time since 2010. The Trump Administration had called for the international embargo to be extended.

The Islamic Republic has a long wish list to modernize its military. During the monarchy, Tehran relied heavily on U.S. imports, including fighter aircraft, attack helicopters, tanks and laser-guided munitions. But it turned to the Soviet Union and China for weaponry after the 1979 revolution. Arms imports never returned to pre-revolutionary heights, however, largely due to sanctions. The military increasingly relied on vintage warships and warplanes. The following is a rundown of the limited information on what Iran might be interested in buying if the arms embargo is lifted.

As of May 2020, Iran was the only country still flying U.S.-made F-14 Tomcats; it also still flies F-4 and F-5 fighters purchased by the shah. Iran has expressed interest in purchasing fourth-generation warplanes, particularly the Sukhoi Su-30 fighter—a model used by the Russian military during the Syrian civil war. In November 2019, the Defense Intelligence Agency (DIA) reported that Iran was also interested in acquiring the Yak-130, an aircraft used by Russia to train pilots. Chinese and Israeli news outlets have also reported that Iran is interested in the Chengdu J-10, a Chinese fighter comparable to an American F-16.

On June 23, Secretary of State Mike Pompeo warned that purchase of the SU-30s or J-10s could put countries as far as Germany and India “in Iran’s crosshairs.” He tweeted out a graphic showing the maximum range of fighters launched from Iran if they only traveled one-way. Iranian Foreign Minister Javad Zarif accused Pompeo of being misleading. “Perhaps he could also say how they would fly back to Iran having exhausted their fuel,” Zarif tweeted. 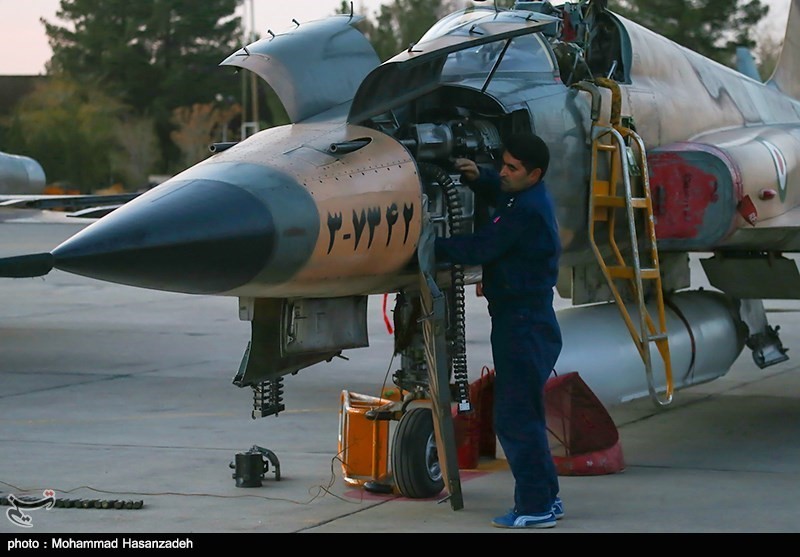 An Iranian fighter jet was serviced in November 2017

Iran’s homegrown arsenal of short- and medium-range ballistic missiles is the largest in the region. Iran’s Shahab 3 and Emad 1 missiles have a range of up to 2,000 kilometers. In 2016, Iran also acquired a S-300 air defense system from Russia. The upgrades provided Iran’s air defense system a “generational improvement,” Lt. Gen. Robert Ashley, Director of the Defense Intelligence Agency, testified before Congress in 2018. But Iran’s nationwide network of air defenses still had gaps in the event of a U.S. air strike. “A single S-300 is fairly easy to take out,” said Christopher Dougherty, a former Pentagon official now at the Center for a New American Security. “Taking it from a symbolic capability to a warfighting capability would require buying more of them and linking them together.”

Tehran is interested in purchasing more advanced air defense systems, a step it can already take without the lifting of the arms embargo. In May 2019, Russian President Vladimir Putin rebuffed an Iranian request to purchase the S-400, Russia’s most advanced air defense system, possibly to avoid jeopardizing Russia’s relations with Saudi Arabia and Israel. Russia has been reluctant to sell air defense systems that are more advanced than the S-300 to Iran. However, Moscow has been willing to sell Iran advanced radar. Russia claimed the Rezonans-NE radar system - operated by Iran, Russia, Egypt and Algeria - could detect U.S. F-35 stealth fighters and hypersonic cruise missiles.

In November 2019, the DIA reported that Iran was interested in acquiring Russian anti-ship cruise missiles, such as the Bastion defense system, to bolster its asymmetric capabilities at sea. The system – which Russia claims can hit sea targets up to 350 kilometers (about 220 miles) away – would allow Iran to threaten most U.S. ships in the Persian Gulf from its shoreline. 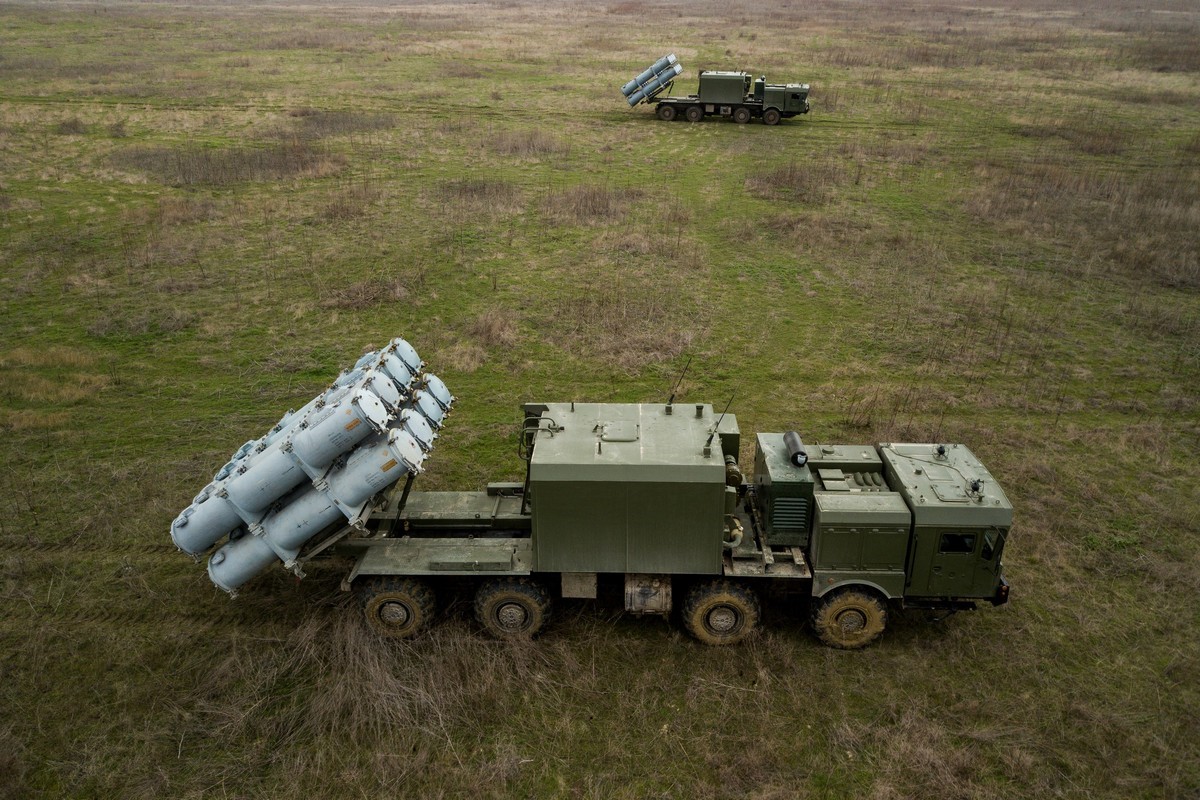 But Iran’s conventional Navy has also been interested in modern warships, according to a 2017 report by the Office of Naval Intelligence. In talks with Chinese officials in 2014, Iran’s top admiral discussed the purchase of modern fast attack craft, frigates and submarines that would allow Iran to operate in the deeper waters of the Indian Ocean and beyond the Gulf of Oman. But Iran could not purchase the ships because of the U.N. arms embargo.

Iran has also sought to modernize its unconventional capabilities. In November 2019, the DIA predicted that Iran will develop and field more-capable unmanned aerial vehicles (UAVs) after the U.N. arms embargo ends. Iran manufactures two types of armed drones – the Shahed 129 and the Mohajed 6. A more advanced class of drones would enable Iran to conduct more cross-border missions and track U.S. naval forces from greater range.

“Today, they have a difficulty in doing that reliably,” said Christopher Dougherty, a senior fellow at the Center for a New American Security and a former Pentagon official. China is a major exporter of armed drones in the Middle East; it has sold military drones to Egypt, Iraq, Jordan, Saudi Arabia and the United Arab Emirates. Its CH-4 and Wing Loong drones bear a resemblance to the U.S.-made Predator drones. 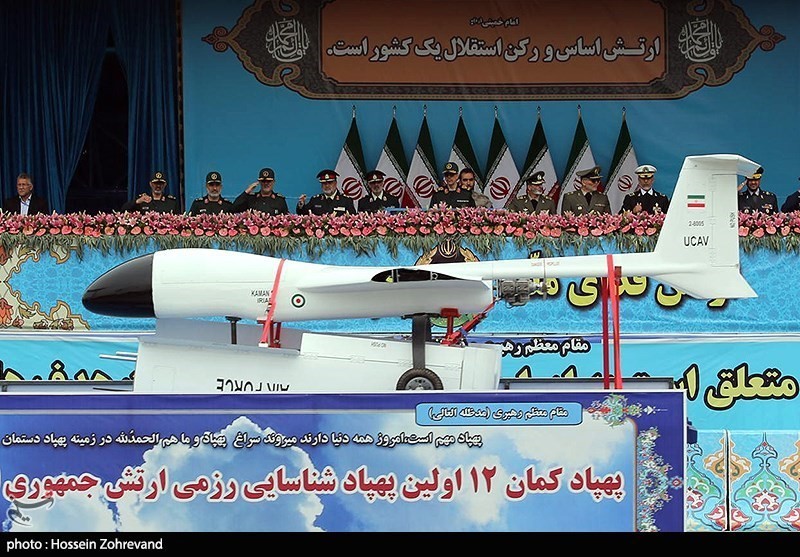 UAV on display during a military parade in April 2019

Iran has sought to modernize its technology to jam or disrupt U.S. radar, communications and satellites.  It has invested in GPS and satellite jamming technologies, according to a February 2019 report by the DIA. “Iran recognizes the strategic value of space and counterspace capabilities and will attempt to deny an adversary use of space during a conflict,” the report said. Anti-radar missiles could allow Iran to take down U.S. missile defense deployed in the region, such as Patriot missile batteries or Terminal High Altitude Area Defense (THAAD) systems. A Karrar tank, a domestically-produced tank introduced in 2017

For decades, Iran’s conventional Army relied on vintage tanks—U.S.-made M60s purchased during the monarchy in the 1970s and Russian-made T-72s bought in the 1990s. In 2016, Iran discussed purchasing T-90 tanks from Russia, but in April 2020 it unveiled a domestic armored vehicle that resembled the T-90. Tehran will be able to buy modern tanks after the embargo ends. Aside from tanks, Iran has not shown an interest in major technological improvements to the arsenal for its ground forces. Iran’s conventional forces are “primarily oriented for defensive missions,” the DIA reported. For offensive missions, the Islamic Republic will rely on a network of proxy militias to protect its interests and project its power in both the Middle East and South Asia, even after the U.N. arms embargo expires.