Hadi Ghaemi
Overview
The 1979 revolution erased six decades of modernization of Iran’s judicial system. The theocrats moved swiftly to overhaul the legal system to incorporate Islamic Sharia law. Criminal and civil codes were modified; family laws that cover marriage, divorce, child custody and many women’s rights faced the biggest changes. The new Islamic penal code included controversial articles, such as the Qisas law of retribution for murder, stoning for adultery, amputations of body parts for theft and certain national security offenses, and flogging for a wide range of offenses.
Many of the new laws were legislated in vague terms, allowing for subjective interpretations as well as diverse and even contradictory rulings by judges. As a result, the judiciary is widely considered one of the Islamic Republic’s most dysfunctional institutions. Even judges are critical. When Ayatollah Mahmoud Hashemi Shahroudi was appointed judicial chief in 1999, he said in his inaugural speech that he inherited an institution “in ruins” and in serious need of reforms.
Of the three branches of government, the clerics have the strongest presence in the judiciary. Only clerics who trained in Islamic jurisprudence or have degrees from religious law schools can now become judges. Women are barred from becoming judges altogether. The head of the judiciary, the country’s prosecutor general, and all Supreme Court judges have to be mojtahids, or high-ranking clerics.
Political tool
The judiciary plays the paramount role in suppressing dissent and prosecuting dissidents, often on charges of “acting against national security.” Working closely with intelligence services, the judiciary has for decades tried a wide range of opponents and critics, from students and street protestors to civil society activists and political reformers.
Trials are often criticized for lack of evidence and not conforming to fundamental standards of due process. Detainees can be held for long periods in solitary confinement. Many are denied access to their lawyers. Verdicts are often based on “confessions” extracted during interrogations. And many are sentenced to lengthy prison terms.
Iran’s Revolutionary Courts are primarily in charge of prosecutions involving acts against national security, as well as drug smuggling and espionage. After the disputed 2009 presidential election, the judiciary emerged as a key instrument to intimidate protestors and remove many leading activists and opinion makers, steps that were both critical to the regime’s survival.
The Revolutionary Courts conducted a series of show-trials that included televised confessions. Among the more than 250 defendants were protestors, prominent journalists, human rights defenders and reformist politicians. They included former Vice President Mohammad Abtahi and former Member of Parliament Mohsen Mirdamadi, who headed the Islamic Participation Front, the largest reform party in Iran. The sentences ranged from floggings to prison terms of up to 10 years and executions. Much of the evidence was produced in “confessions” by defendants. Since the majority of defendants were held in solitary confinement before the trial and had no access to their lawyers, many confessions appeared to have been coerced.
Executions

During the 1980s, Revolutionary Courts routinely sentenced political prisoners to death. In 1988, at least 4,000 political prisoners who had already been prosecuted and sentenced to prison terms were summarily retried and executed within a two-month period, according to Amnesty International and Human Rights Watch.

Iran still carries out more executions proportionate to its population than any other country. Only China executed more people in sheer numbers than Iran. In 2005, the year President Mahmoud Ahmadinejad assumed office, Iran executed 86 individuals. In 2009, Iran executed 388 people. Between 2010 and 2014, executions rose dramatically with a total of at least 3,242 executions. 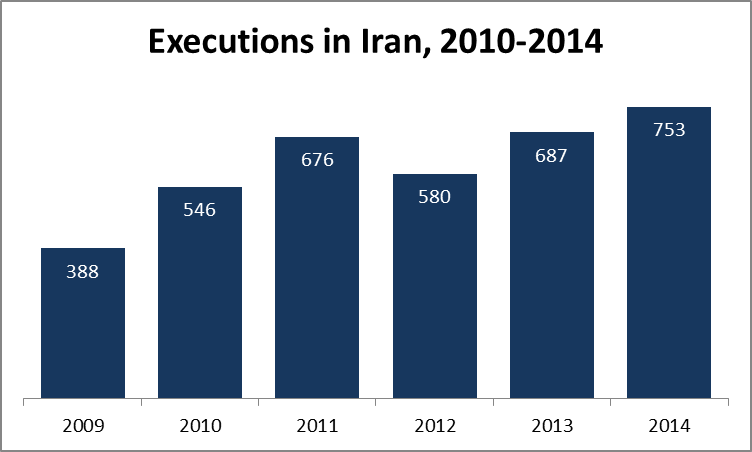 A large number of executions are for drug-related offences. Despite tough penalties, drug use and smuggling remain serious problems.

Iran leads the world in executing juvenile offenders. In 2008 and 2009, it was the only country to carry out executions of minors, in violation of its obligations under the Convention on the Rights of the Child. Iran continues to execute juvenile offenders, including at least 11 executed in 2013 and 13 in 2014.

In the 2009 show-trials after the election turmoil, 11 dissidents were sentenced to death for participating in street demonstrations. Between November 2009 and May 2010, Iran executed nine political prisoners.

Political prisoners of ethnic minority backgrounds, particularly the Kurds and Arab Iranians, are executed under charges of terrorism, which is rarely proven in credible trials. In October 2013, three Kurds were executed for moharebeh [enmity against God] and for “attempting to overthrow the Government.” In November 2013, four individuals from the Arab minority community were executed for “acting against national security," moharebeh and efsad fil-arz [spreading corruption on earth].

Crimes punishable by death under Iranian law include armed resistance against the state (defined as enmity against God), murder, drug trafficking, rape, adultery and homosexuality.
The court system
Iran’s legal system has many layers of courts. The constitution calls for civil and criminal courts, as well as military courts. Prosecutions originate in lower courts and can be appealed to higher courts. The Supreme Court reviews cases of capital offenses and rules on death sentences. It is also tasked with ensuring proper implementation of the laws and uniformity of judicial proceedings.
But the Islamic Republic also has Revolutionary Courts and the Special Court for the Clergy. Both sets of tribunals were based on decrees by revolutionary leader Ayatollah Ruhollah Khomeini. They have never been incorporated into the constitutional clauses defining the role and structure of the Judiciary. Legal experts critical of these tribunals have repeatedly challenged their legal standing. The Special Court for the Clergy has also been used as a political tool against clerics who urge reforms, criticize the regime or challenge the role of the supreme leader. It has been compared to the Inquisition courts of the Middle Ages.
The constitution defines the judiciary’s general responsibilities as:
The legal code
Iranian laws reflect a specific interpretation of Shiite jurisprudence, which is not embraced all by Shiites. It has particularly changed family laws, instituted broad discriminatory laws against women, introduced the laws of retribution and toughened the penal code with punishments such as stoning, floggings and amputations.
Among the most controversial laws are those relating to the age at which offenders are held responsible as adults for criminal activity. The Islamic penal code defines this age of responsibility as nine for girls and 15 for boys. This has resulted in large numbers of juvenile executions.
Reformist religious scholars have challenged these interpretations of Sharia law. They claim Islamic jurisprudence does not allow for the implementation of executions in the absence of a divine individual, such as the Prophet Mohammed or his descendants. Reform of the civil and penal codes is a major flashpoint between reformist and conservative factions within Iran’s political system.
Impunity and accountability
The accountability of courts and judges, especially in political cases, is hotly debated among the ruling elite. Iran has a court in charge of prosecuting offending judges, but it has not been used as a way to impose accountability. Parliament has undertaken several investigations into judicial practices, but the judiciary has rebuffed their intervention and stonewalled any meaningful investigations. The supreme leader appoints the judiciary chief, and judicial officials contend they are only accountable to the supreme leader.
The impunity of intelligence and judicial officials has been demonstrated in many high profile cases since the revolution. In 1998, intelligence agents allegedly murdered several dissident intellectuals. President Mohammad Khatami acknowledged the role of state agents in these murders, but the judicial process was stifled by the intelligence apparatus derailing a credible and independent investigation. In the end, no information was ever publicly disclosed about how these murders were planned or on whose orders.
After the 2009 uprising, four detainees died after being tortured at Tehran’s Kahrizak Detention Center. A parliamentary investigation held Tehran prosecutor general Saeed Mortazavi personally responsible. Mortazavi was also suspected of direct involvement in the murder of Zahra Kazemi, an Iranian-Canadian photojournalist, in Evin prison in 2003. He and other high-ranking officials suspected of serious offenses have never been subjected to a judicial investigations or prosecution.
Attempts at reform and ensuing resistance
Shahroudi, who headed the judiciary from 1999-2009, made the most serious attempts at reforming judicial institutions. But his initiatives were largely stymied by conservative clerics within the judiciary and their allies in influential positions.
Iran’s justice system is particularly criticized for two practices that distinguish it on the global stage: death by stoning and execution of juvenile offenders (under the age of 18). Shahroudi tried but failed to put an end to both practices. The powerful 12-man Guardian Council, which can veto legislation, has repeatedly blocked reforms. Shahroudi instead issued several internal directives to judges urging them to refrain from issuing such sentences. But his directives were largely ignored. His successor, Ayatollah Sadegh Larijani, abandoned any attempts at reform on these issues.
Shahroudi also attempted to outlaw harsh interrogation techniques and ill-treatment of detainees. His efforts led to the parliament’s adoption of a Citizens Bill of Rights in 2004. In practice, however, these safeguards have not been implemented, and judiciary officials have not shown any willingness to enforce them through courts.
Trendlines
Hadi Ghaemi, a physicist, is the executive director of the International Campaign for Human Rights in Iran.