On December 11, the U.S. wrestling team won the 2022 World Cup 6-4 in a hard-fought series of individual matches with Iranian wrestlers in Coralville, Iowa. The win came two weeks after Team USA beat Iran 1-0 in soccer at the FIFA World Cup in Qatar. The two wins marked a reversal of sports fortunes. Iran finished higher than the United States in the 2019 freestyle wrestling tournament, when the Iranians finished second and the Americans finished third. At their only other meeting, in 1998, Team Melli defeated the Team USA 2-1 in soccer at the FIFA World Cup in France.

The two sport championships coincided with escalating tensions between Washington and Tehran, reflected in Iran’s failure to accept terms to revive the 2015 nuclear deal, its arms sale and deepening ties with Russia, and its brutal crackdown on nationwide protests. The issues were reflected in the crowds who attended the wrestling tournament. Iranian-Americans shouted chants—including “Down with the Dictator”—against the Iranian government. Some yelled “Not our flag” when the Iranian flag was brought into the stadium. Some wore T-shirts with the slogans of Iran’s protesters—“woman, life, freedom” and “Stop executing Iranian protesters.” Other T-shirts had pictures of Mahsa Amini, the young Kurdish woman whose death on September 16 triggered waves of unrest.

Despite the break in U.S.-Iran diplomatic ties in 1980, after Iranian students took over the American Embassy, their sports rivalries have endured. USA Wrestling teams have traveled to Iran more than a dozen times. The Iranian team—which historically has won the third highest number of World Cup titles after the United States and the Soviet Union/Russia—traveled to the American corn-belt for the 2022 World Cup. The Iranian Wrestling Federation, however, claimed that seven wrestlers were denied visas for the tournament.

In 2022, the U.S. team had little trouble in individual matches with wrestlers from Mongolia and Georgia in the first two rounds. The Iranian wrestlers proved to be the toughest opponents. Team USA lost seven individual matches, four against Iran. And some were close calls. Out of the 10 matches between the two teams, U.S. wrestlers won four by only one point or criteria (an ordered tie-breaking list in the rules of wrestling), and several star wrestlers lost in upsets. “It’s a significant win for our program,” Rich Bender, executive director of USA Wrestling, told The Iran Primer. “Any time we have the opportunity to compete against the Iranian Wrestling Federation, one of the top wrestling powers in the world, it’s a big win for us.”

In Iran’s best performance, Ali Savadkouhi defeated 2012 Olympic champion Jordan Burroughs, who had been undefeated in all earlier World Cups and against foreign opponents at home tournaments. Savadkouhi won on criteria for higher-scoring moves after the match ended 6-6. He had lost to Burroughs at a tournament in Turkey in February 2022. “I knew I was down,” Savadkouhi said after his victory. “But I knew from the first minute that he will make a mistake. I am happy to be the first Iranian to beat Burroughs and more importantly to win in his home country.”

Despite the momentum shift, the United States won the six individual matches required to secure the title. Kyle Snyder’s victory over Kamran Ghasempour clinched the title for USA Wrestling. “I want to be the closer,” Snyder said. “Sandman. Enter in, put them to sleep.”

After the tournament, Iranian state media Press TV charged that “anti-Iranian mercenaries” had tried to “take the wind out of [the team’s] sails” by “casting slurs and hurling insults” at the Iranian team. It also accused “rioters-turned-fans” and “counter-revolution foreign-sponsored media” of harassing the athletes during interviews and at their hotel. Press TV condemned the “propaganda and mudslinging” as an extension of foreign media bias against Iran’s national soccer team during the 2022 FIFA World Cup.

The Iranian wrestlers, however, refused to publicly support the protests back home when questioned by reporters in Iowa. “Such issues arise in every country and a number of issues have arisen in my country as well,” said Ghasempour. He added that the “duty” of athletes is to play sports. “We came here to represent the people of Iran. Hopefully, these issues will soon be resolved, and our beloved people and Iranian society will reconcile,” he said. Rahman Amouzad Khalili said that the wrestlers were “here to be the best.” He added, “We are all soldiers of our country and sacrifice our lives.”

For decades, wrestling has been a highly competitive feature of the U.S.-Iran sports rivalry. Between the 1990s and 2022, the two teams competed dozens of times. U.S. wrestlers were the first American athletes to visit the Islamic Republic after the 1979 revolution, when they competed in the Takhti Cup in Tehran in February 1998.

Bender said that wrestling transcended politics. “We have a good relationship with [the Iranian] federation and a lot of respect for their wrestling,” he said. “We have worked for more than three decades to build this relationship above politics.” He said that the U.S. team had been treated well when they competed in Iran. “A common factor in each matchup has been “mutual respect for great wrestling,” despite the teams being “fierce rivals,” he added. Both wrestling federations collaborated to keep wrestling in the 2020 Olympics. 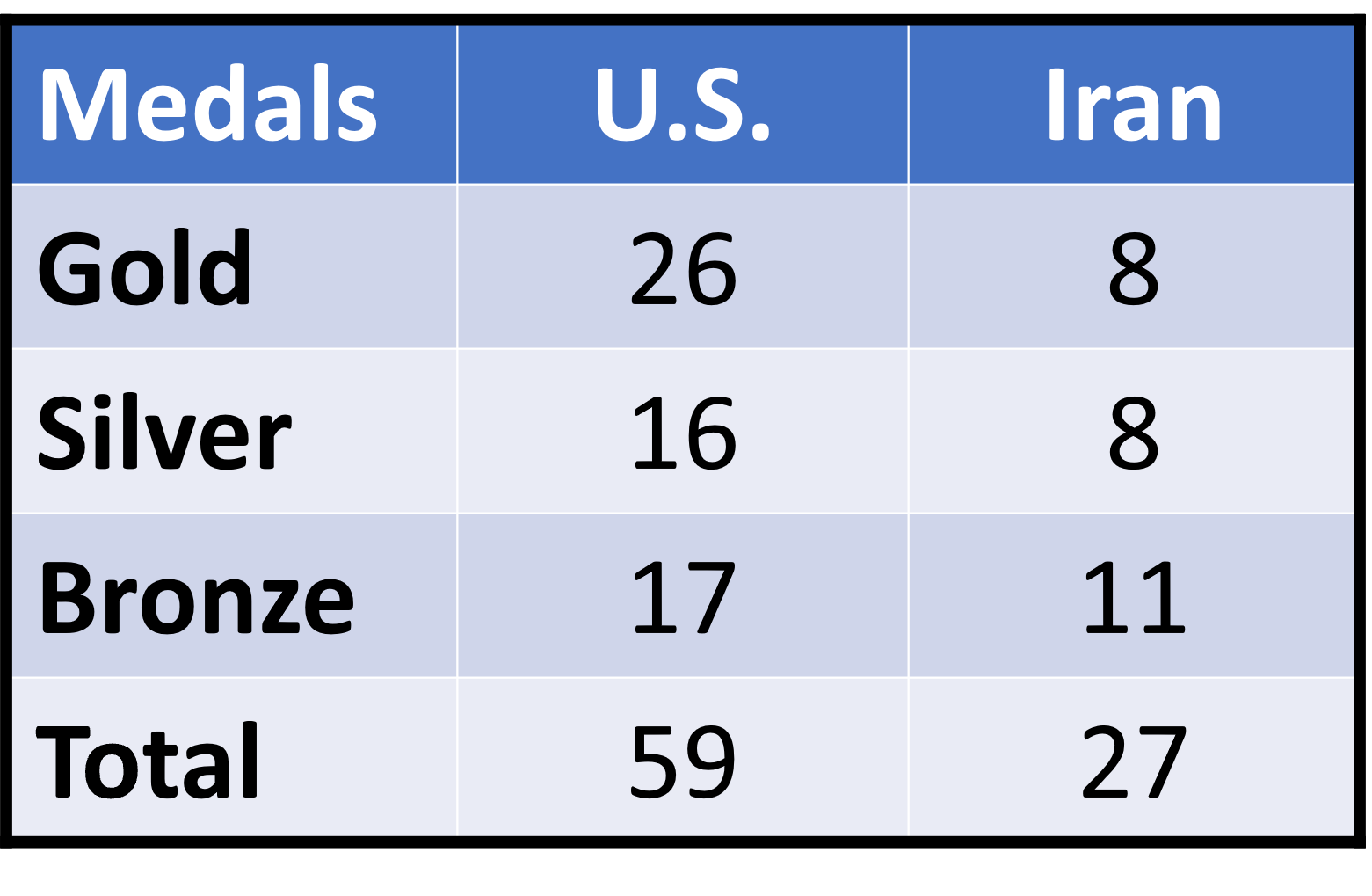 At the Olympic Games after the 1979 revolution, U.S. teams have won far more medals—gold, silver and bronze—than Iranian wrestlers. To the left is a rundown on Olympic medals (in Greco-Roman and freestyle).

Iranian wrestlers, despite their status as beloved heroes at home, have also been victims of the Islamic Republic’s oppression. Navid Afkari, a 27-year-old champion wrestler, was tortured and hanged in 2020 for participating in the 2017-2018 protests triggered by the price of eggs and poultry. Afkari was charged with insulting the Supreme Leader, murdering a security officer and moharabeh, or “enmity against God,” a vague charge often levied against protesters and activists.

In 2022, the Iranian wrestling team withdrew from an exhibition match in Texas after six delegation members—including wrestling federation head Alireza Dabir, a former green-card holder—were denied visas. The United States did not offer an official explanation, but Dabir blasted the United States. “We always chant ‘Death to America’ but more important is showing it in action,” he said in a video in January 2022. The following are images from the December 2022 matchup.

The following is a rundown on the U.S.-Iran individual matches from Team USA:

Photo Credits: All pictures courtesy of Tony Rotundo of Wrestlers Are Warriors

Connor Bradbury, a senior program assistant at the U.S. Institute of Peace, assembled this report.