On October 20, the United Arab Emirates (UAE) announced that it released $700 million in frozen funds to Iran—a sign of thawing relations between the two Gulf countries. On October 14, Iranian President Hassan Rouhani said there have been “some contacts between Iran and the United Arab Emirates in recent months…and the Tehran-Emirates relations has been better in recent months than ever before.” The statement followed a secret meeting between Iranian officials and Tahnoun bin Zayed, the Emirati national security adviser, who traveled to Tehran for high-level discussions on October 11.

Iran has also attempted to improve its relationship with Saudi Arabia. In mid-October, Pakistani Prime Minister Imran Khan traveled to Iran and Saudi Arabia to discuss ways to reduce regional tensions. After the meetings, the rival countries indicated a willingness to meet for talks, which would be hosted and mediated by Pakistan. "Our two countries emphasized that regional issues could only be resolved through political means and dialogue," said Rouhani. “We openly welcome any goodwill gesture by Pakistan for providing more peace and stability for the whole region, and we are ready to assist Pakistan for providing full peace and stability for the whole region." 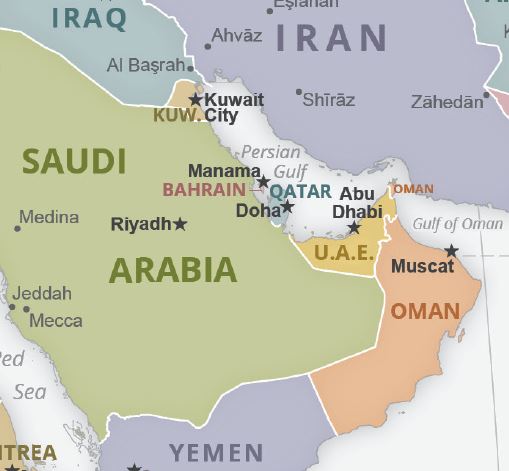 Iran opened the door to diplomacy with Saudi Arabia and the UAE after several incidents that raised the possibility of armed conflict. Tensions between Iran its Gulf neighbors escalated after an attack on four tankers—two Saudi-flagged, an Emirati-flagged and an Norwegian-flagged – on May 12 in the Strait of Hormuz. The United States and Saudi Arabia blamed Iran for the attacks.

Tensions again increased following a drone attack on two major oil facilities in Saudi Arabia. On September 14, the Abqaiq and Khurais facilities—both run by the state-owned company Saudi Aramco—were  struck  by projectiles in a pre-dawn attack. Riyadh blamed Tehran for the attack and vowed to respond to the “terrorist aggression.” Iran denied any responsibility for the attacks on Saudi oil facilities. Foreign Minister Mohammad Javad Zarif  warned  that Tehran would respond to a U.S. or Saudi retaliatory military strike with “all-out war.”

On October 11, Iranian state media reported that the Sabiti, a tanker owned by the National Iranian Tanker Company, was struck by two missiles in the Red Sea. President Hassan Rouhani claimed a foreign government was responsible for the strike, which occurred 60 miles away from the Saudi port of Jeddah. “If a country thinks that it can create instability in the region without getting a response, that would be a sheer mistake,” Rouhani said.

Historically, Iran has had closer ties with Dubai than Abu Dhabi. More than 400,000 Iranian expatriates reportedly live in Dubai, which has been an important trade partner for Tehran. For years, it was Iran’s most important trade partner in the region. In 2012, bilateral trade between Iran and the UAE totaled $15 billion, of that $6.8 billion was Iran-Dubai trade. In 2018, total trade between Iran and the UAE equaled $19 billion.

Shortly after taking office in 2013, Foreign Minister Zarif told The New Yorker that Iran’s top foreign policy priority, after resolving the conflict over its nuclear deal, was to improve relations with its Gulf neighbors. In December 2013, Iranian Foreign Minister Mohammad Javad Zarif went on a tour of Gulf Arab states, including Kuwait, Oman and Qatar – but not Saudi Arabia. But he emphasized that Tehran was keen on improving relations with Riyadh. Since 2013, several issues have proven to be obstacles to rapprochement, including a deadly stampede during the 2015 hajj pilgrimage, sectarian issues, and the war in Yemen.

The following is a timeline of tensions and outreach between Iran and its Gulf neighbors since May 2019.

May 12 - Four ships off the coast of the United Arab Emirates (UAE) were reportedly sabotaged, including two Saudi Arabian oil tankers. One was due to take a delivery of Saudi oil to the United States. U.S. officials said that an intelligence assessment, including photographs and forensics, found it was “highly likely” that Iran or one of its proxies were responsible for the tanker attack.

June 12 - A missile fired by an Iranian-backed militia in Yemen hit the arrivals hall of Abha airport in southwest Saudi Arabia. The kingdom reported 26 people were injured. Saudi Arabia blamed Iran for the attack. "The Iranian regime is the only party in the region that has been pursuing reckless escalation, through the use of ballistic missiles and UAVs to directly target civilian installations and innocent civilians,” Deputy Defense Minister Prince Khalid bin Salman said. “The continuation of the Iranian regime’s aggression and reckless escalation, whether directly or through its militias, will result in grave consequences."

July 30 – Iranian and UAE officials met in Tehran to discuss maritime security for the first time in six years. The meeting signaled a de-escalation in Gulf tensions that ignited when four oil tankers were sabotaged off the coast of the UAE on May 12.

Sept. 14 - The Abqaiq and Khurais facilities in Saudi Arabia—both run by the state-owned company Saudi Aramco—were struck by “projectiles” in a pre-dawn attack. Riyadh blamed Tehran for the attack and vowed to respond to the “terrorist aggression.” Iran denied any responsibility for the attacks on Saudi oil facilities. Foreign Minister Mohammad Javad Zarif warned that Tehran would respond to a U.S. or Saudi retaliatory military strike with “all-out war.”

Sept. 18 – Saudi Arabia announced that it would join the U.S.-led maritime security coalition, Operation Sentinel, in the Persian Gulf. “The kingdom’s accession to this international alliance comes in support of regional and international efforts to deter and counter threats to maritime navigation and global trade,” said state-run Saudi Press Agency. The announcement came as U.S. Secretary of State Mike Pompeo visited the region to build a coalition for “peaceful resolution.”

Sept. 19 – The United Arab Emirates announced it would follow Saudi Arabia and join the international maritime mission to protect commercial shipping in the Persian Gulf.

Iranian Foreign Minister Zarif warned that Tehran could respond to a U.S. or Saudi military strike with “all-out war.” He questioned Saudi resolve and told CNN that the kingdom was prepared to fight "to the last American soldier." Zarif said Tehran hoped to avoid conflict but added, “We won't blink to defend our territory.”

Sept. 25 – Iranian President Hassan Rouhani called for unity in the Gulf during his speech to the U.N. General Assembly. He introduced a “Coalition for Hope” or “Hormuz Peace Endeavor” to “promote peace, stability, progress and welfare for all the residents of the Strait of Hormuz region and enhance mutual understanding and peaceful and friendly relations amongst them.” He listed potential areas for cooperation “such as the collective supply of energy security, freedom of navigation and free transfer of oil and other resources to and from the Strait of Hormuz and beyond.”

Oct. 1 –Abbas al Hasnawi, an official in the Iraqi prime minister's office, said Iraqi Prime Minister Adel Abdul Mahdi was mediating between Riyadh and Tehran. Hasnawi told the Middle East Monitor that Iraq had channels with both sides and hoped to arrange a meeting in Baghdad. "The Saudis have conditions before the negotiations process starts and the same with Iranians. We have liaised these conditions to each side. It is not an easy task to get together two opposite sides in terms of their ideology, sect and their alliances in the region," he said.

Oct. 11 – Iranian state media reported that the Sabiti, a tanker owned by the National Iranian Tanker Company (NITC), was struck by missiles in the Red Sea. Saheb Sadeghi, the NITC head of public relations, said the missiles were “possibly” fired from Saudi territory. But the National Iranian Oil Company later dismissed that possibility. The Sabiti was reportedly 60 miles from the Saudi port of Jeddah when it was hit.

Iranian Foreign Ministry spokesman Abbas Mousavi described the attack as “dangerous adventurism” and warned that the culprits “are responsible for the consequences.”  No country or organization immediately claimed responsibility for the attack, and Iran provided no evidence of a missile strike. The price of Brent crude rose by two percent in response to the news.

Oct. 11-13 - Tahnoun bin Zayed, the national security adviser of the United Arab Emirates and the crown prince’s younger brother, traveled to Tehran to meet with Iranian officials. Zayed was reportedly dispatched to Iran for secret high-level discussions to ease tensions in the Gulf.

Oct. 13 - Pakistani Prime Minister Imran Khan met with Iran’s Supreme Leader Ayatollah Ali Khamenei and President Rouhani on October 13. After the meeting, Tehran indicated a desire to engage with Riyadh. "Our two countries emphasized that regional issues could only be resolved through political means and dialogue," said Rouhani. "We openly welcome any goodwill gesture by Pakistan for providing more peace and stability for the whole region, and we are ready to assist Pakistan for providing full peace and stability for the whole region."

Oct. 15 – Prime Minister Khan met with Saudi King Salman bin Abdulaziz and Crown Prince Mohammed bin Salman. "During the meeting, [Khan and Prince Salman] reviewed strong ties between the two brotherly countries and fields of joint cooperation as well as ways of enhancing them. They also discussed the latest developments in the region and a number of issues of common interest,” said an official government statement.

Oct. 14 - Iran’s oil ministry released images of the tanker Sabiti, which clearly showed two holes in its hull just above the waterline. President Hassan Rouhani claimed a foreign government was responsible for the October 11 attack, which occurred in the Red Sea some 60 miles away from the Saudi Arabian port of Jeddah. “If a country thinks that it can create instability in the region without getting a response, that would be a sheer mistake,” Rouhani said.

Oct. 20 – The United Arab Emirates released $700 million in frozen funds to Iran—a sign of improving relations between the two countries. “The Emiratis have… understood that Western countries and Saudi Arabia cannot provide the [UAE] with security in the current circumstances,” said Akbar Torki, a member of Iranian parliament. “Financial relations with Iran have improved and some Iranian exchange offices in Dubai have resumed activity.”

Oct. 21 - Foreign Minister Zarif said he would welcome a meeting with Saudi officials in Riyadh. “If suitable conditions are provided, I would be ready to travel to Riyadh to settle differences,” Zarif told ISNA. “Tehran welcomes any initiative that aims to ease tensions in the region and will cooperate [with other parties] to end Yemen’s war."