In his first year in office, President Ebrahim Raisi blamed many of the Middle East’s problems on Western powers. Foreign intervention, notably by the United States, had produced only conflict and political discord, he argued. The “idea of hegemony, but also the project of imposing Westernized identity have failed miserably,” he said in his debut address to the U.N. General Assembly in 2021. 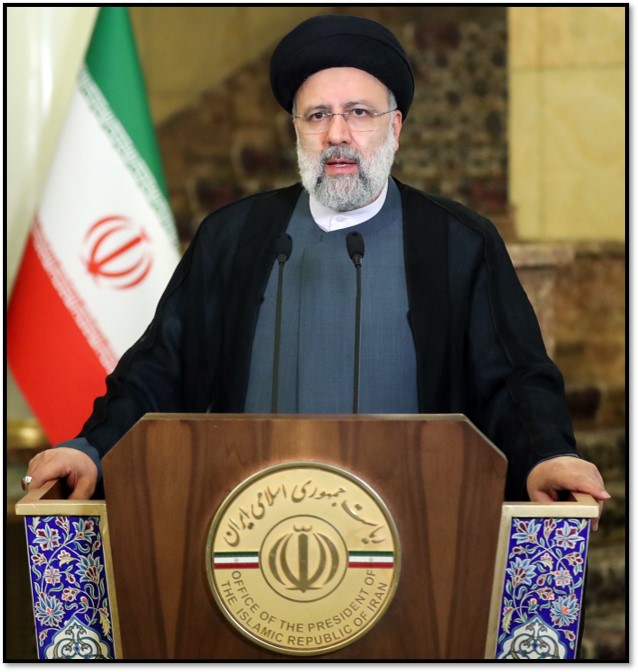 Raisi also declared that U.S. power and influence were waning. “Today, the U.S. does not get to exit Iraq and Afghanistan but is expelled.” He added, “The world doesn’t care about ‘America First’ or ‘America is Back,’” recalling policy slogans used by President Donald Trump and President Joe Biden. Raisi blasted the Biden administration for upholding the more than 1,500 sanctions imposed by the Trump administration after it withdrew from the 2015 nuclear deal in 2018. The punitive measures amount to an “organized crime against humanity,” Raisi alleged. He focused on improving ties with Russia and China.

But Raisi, a hardliner, also backed diplomatic efforts to return the United States and Iran to full compliance with the 2015 nuclear deal. He otherwise did little outreach to Western countries. In stark contrast, one of the first acts of Raisi’s centrist predecessor, Hassan Rouhani, was to take a call from President Barack Obama within two months of taking office in 2013. The exchange was the first direct communication between an American and Iranian president since the 1979 revolution. Rouhani had also welcomed Western investment during a visit to the World Economic Forum in Davos, Switzerland in 2014. Rouhani led a 120-person delegation to Italy, where he inked billions of dollars in business deals and met Pope Francis in 2016. Rouhani then signed agreements in France, including a $27 billion deal to purchase Airbus planes. The following are Raisi’s comments on the United States and the West.

In a meeting with Russian President Vladimir Putin on Sept. 15, 2022: “President Ebrahim Raisi met with Russian President Vladimir Putin on the sidelines of the Shanghai Cooperation Organization summit in Samarkand, Uzbekistan. “The relationship between countries that are sanctioned by the US, such as Iran, Russia or other countries, can overcome many problems and issues and make them stronger.”

“The Americans think whichever country they impose sanctions on, it will be stopped. Their perception is a wrong one.”

In response to a question about meeting President Biden on the sidelines of the U.N. General Assembly on Aug. 29, 2022: “In the previous meeting, I said no in response to a similar question. I repeat ‘No’ once more. There is no benefit in meeting with him for the interests of the great nation of Iran, and there is no plan for such a meeting and there will not be any.”

Remarks on the second anniversary of the U.S. assassination of General Qassem Soleimani on Jan. 3, 2022: “The aggressor and murderer and the main criminal, who is the then President of the United States must be brought to justice, retribution must be carried out.”

“If the mechanism for a fair trial of Mr. Trump, Pompeo and other criminals is provided, they will be punished for their shameful acts in a fair trial for committing this horrific crime. If not, I tell all American statesmen that do not doubt that revenge will come.”

In an address to the Russian Duma on Jan. 20, 2022: “The experience of an international system based on domination shows that its output was nothing but war, violence, insecurity and division among nations. The failure of the policy of military occupation and forcing the United States to flee Iraq and Afghanistan stems from one concept: resistance of nations.”

“However, the war on terrorism has been part of the war on hegemony; because terrorism is one of the by-products of hegemony. The strategy of domination has now failed, and the United States is in its weakest position, and the power of independent nations is experiencing its historic growth. The important thing in this age, which requires vigilance, is that the desires for domination have not disappeared and new forms of domination are on the agenda.”

“The ‘evil alliance’ of the United States with terrorists is clear to the world, especially to the nations of West Asia, from Syria to Afghanistan. There are now complex plans to send takfiri terrorists on new missions from the Caucasus to Central Asia. Experience has shown that it is pure Islamic thought that can prevent the formation of extremism and takfiri terrorism.

“NATO, on the other hand, seeks to infiltrate various geographical areas with new coverings that threaten the common interests of independent states. Promoting pro-Western governments and confronting independent democracies based on national identities and traditions is part of NATO's cultural projects that reflect the hypocrisy of this diminishing pattern of behavior.”

“The strategy of domination has now failed, and the United States is in its weakest position, and the power of independent nations is experiencing historic growth.”

“Sanctioning nations is a common form of new domination, and countering it requires the cooperation of independent states and a collective response. Otherwise, sanctions will affect all countries, even US allies, under various pretexts. The United States claims that the sanctions are due to the Islamic Republic of Iran's nuclear activities. Everyone knows that these activities are legal and under the constant supervision of the International Atomic Energy Agency. But the reality is that in different historical periods of Iran's development, whenever our nation has raised the banner of nationalism, independence, or scientific development, it has faced sanctions and pressures of the Iranian nation's enemies.”

“The policy of the Islamic Republic of Iran, according to the fatwa of the Supreme Leader of the Islamic Revolution, is that we are not looking for a nuclear weapon, and such weapons have no place in our defense strategy. America seeks to oppose the rights of our nation. Our philosophy is also clear: ‘We do not relinquish the rights of our nation.’ Those chanting, ‘America is back’ have not yet fulfilled their obligations under the nuclear deal. We are not satisfied with anything less than our rights. The Islamic Republic of Iran is serious about reaching an agreement if the other parties are serious about lifting the sanctions effectively and operationally.”

During a meeting with Russian President Putin on Jan. 19, 2022: “NATO’s influence under any pretext in the Caucasus and Central Asia is a threat to the mutual interests of independent countries.”

“Just like you, we have also stood up against U.S. sanctions from 40 years ago.”

In an address to the U.N. General Assembly on Sept. 21, 2021: “This year, two scenes made history: one was on January the 6th when the U.S. congress was attacked by the people and, two, when the people of Afghanistan were dropped down from the U.S. planes in August. From the Capitol to Kabul, one clear message was sent to the world: the U.S.’ hegemonic system has no credibility, whether inside or outside the country.

What is seen in our region today proves that not only the hegemonist and the idea of hegemony, but also the project of imposing Westernized identity have failed miserably. The result of seeking hegemony has been blood-spilling and instability and, ultimately, defeat and escape. Today, the US does not get to exit Iraq and Afghanistan but is expelled. And, at the same time, it is the oppressed people, from Palestine and Syria to Yemen and Afghanistan, as well as the US taxpayers, who have to pay for this lack of rationality.

“Today, the world doesn’t care about ‘America First’ or ‘America is Back.’ If rationality prevails in the minds of the decision-makers, they have to realize that nations’ perseverance is stronger than the power of the superpowers. Over the past decade, the U.S. has been making the mistake of modifying its ‘way of war’ with the world instead of changing its ‘way of life.’ An erroneous path cannot be brought to fruition by merely adopting a different method.

“Sanctions are the U.S.’ new way of war with the nations of the world. Sanctions against the Iranian nation started not with my country’s nuclear program; they even predate the Islamic Revolution and go back to the year 1951 when oil nationalization went underway in Iran, which in turn led to a military coup backed by the Americans and the Britons against the then government of Iran that was elected by the people. Sanctions, especially sanctions on medicine at the time of the COVID-19 pandemic, are crimes against humanity.”

“Moreover, I, on behalf of the Iranian nation and millions of refugees hosted by my country, would like to condemn the continued illegal US sanctions especially in the area of humanitarian items, and demand that this organized crime against humanity be recorded as a symbol and reality of the so-called American human rights.”

“The military presence of the U.S. in Syria and Iraq is the biggest hindrance to the establishment of democracy and will of nations. Freedom does not fit in the backpacks of soldiers coming from outside the region.”

In his inauguration speech on Aug. 5, 2021: “The policy of [U.S.] sanctions and pressure did not force the nation to pursue its legitimate goals, that's the right to development. The sanctions against the Iranian nation must be lifted. … We support any diplomatic initiative that realizes this goal.”