By Tess Rosenberg and Garrett Nada

After its first cases of COVID-19 were reported in February 2020, Iran’s economy faced new challenges exacerbated by longstanding problems, including years of punitive U.S. sanctions. More than one million people – in a labor force of 27 million – lost their jobs in 2020. Inflation soared, worsening the hardships of many poor and rural households. But Iran’s economy rebounded relatively quickly after the initial disruptions caused by the pandemic, aided by the sharp rise in oil prices in the latter half of 2020.

But the “economic rebound has also been predominantly jobless,” the World Bank report noted. Coupled with high inflation, that “has translated to declining household welfare, especially among the bottom income deciles who were also disproportionately impacted by the pandemic.” In January 2022, the cost of food was up 43 percent compared to January 2021. In February 2022, the government issued an emergency order to import 100,000 metric tons of potato and 200,000 tons of rice.

The pandemic played a role in:

The following graphs illustrate how Iran’s economy has weathered the pandemic.

After the pandemic hit, the International Monetary Fund (IMF) projected that GDP would shrink by up to six percent in 2020. But GDP ended up growing by 3.4 percent, mainly due to a recovery of oil prices. Iran never imposed strict or sustained lockdowns like in Western Europe and Asia, so many industries did not suffer as much from the pandemic as their counterparts in other countries. In 2021, business conditions improved as Iran rolled out its vaccination campaign. Growth was also driven by non-oil exports, which rose 38 percent from March 2021 to January 2022 compared to the same period the previous year. 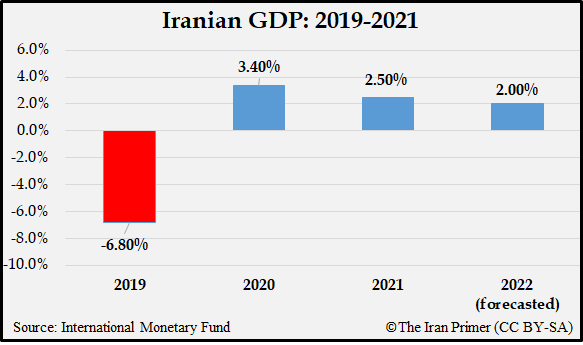 Unemployment was already high before the pandemic hit, at about 10 percent. More than one million people – in a labor force of 27 million – lost their jobs in 2020. The unemployment rate, however, did not shift significantly because many people stopped looking for work.

Women were disproportionately hurt, in part because they tend to work in the services sector – education, health, communications, finance, entertainment, etc. – which was especially vulnerable to the shocks created by the pandemic. “In addition, lockdowns and school closures led women to exit the labor force to shoulder the additional childcare responsibilities,” according to the World Bank report. Female employment was down 21 percent by September 2021 compared to the pre-pandemic level, while male employment shrank by only 2.1 percent.

Inflation began to climb in mid-2020 and peaked at nearly 50 percent in early 2021. One of the main causes was the growing gap between state income and expenditures, largely due to lackluster oil revenue. “Unprecedented and chronic inflation and a decrease in per-capita income created a large gap between households’ income and expenditures,” Ehsan Khandoozi, President Ebrahim Raisi’s choice to head the Ministry of Economic Affairs and Finance, told Parliament during his confirmation hearing in August 2021. This gap “created difficulties in the daily livelihoods for middle- and low-income levels.” 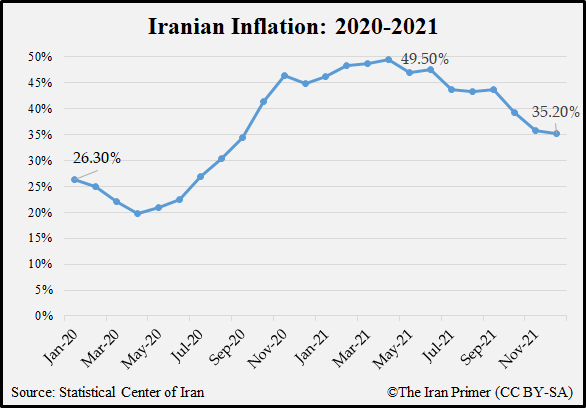 High food and rental costs especially affected the poorest Iranians and the rural population. In September 2021, 23 percent of Iranians said that inflation and high prices were the most important issue for President Raisi to address, according to a survey conducted by IranPoll and the University of Maryland's Center for International and Security Studies. Another 19 percent said that poverty and poor living conditions were the most pressing challenge.

By September 2021, the prices of milk, yogurt, and eggs had risen nearly 80 percent over the preceding 12 months. Vegetables and meat rose by approximately 70 percent, and the relatively-inexpensive staples of bread and rice by 50 percent. Fruit consumption fell by 50 percent as of November. 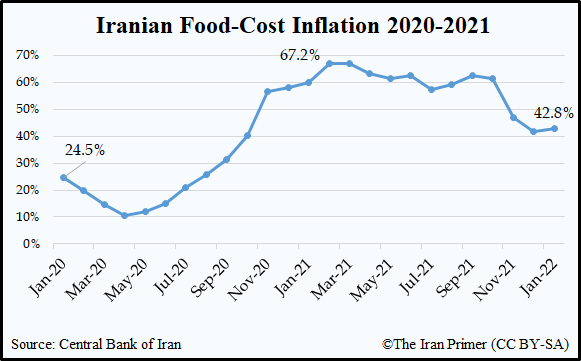 The value of Iran’s currency, the rial, declined sharply after the pandemic started. By the end of 2020, it had lost more than half of its value against the dollar. Iran has little capacity to manage the exchange rate due to restricted access to its foreign exchange reserves. U.S. sanctions have frozen Iranian assets held in foreign banks.

The exchange rate appeared to fluctuate in response to political and diplomatic developments. For example, the rial strengthened from April to June 2021, when Iran and the world’s major powers appeared to make progress in talks on restoring the 2015 nuclear deal. “But market sentiment shifted in the runup to the June presidential election as Ebrahim Raisi, a hardliner, emerged as the leading candidate,” according to Henry Rome, deputy head of research at Eurasia Group.

Raisi, who won the 2021 race, took a harder stance than his predecessor, Hassan Rouhani, on diplomacy with the West. The rial depreciated 15 percent between Raisi’s inauguration in August and the resumption of nuclear talks in November. 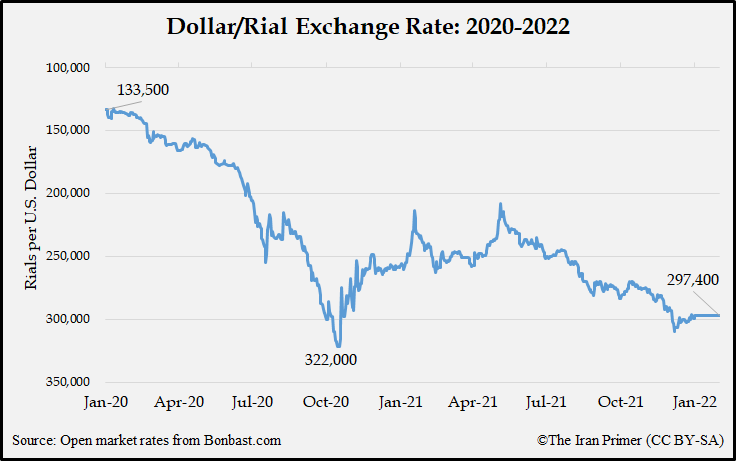 In early 2020, Iran faced a stunning decline in the price of oil – a major source of revenue – as economic activity around the world slowed in response to the pandemic. By April 1, the price of Iran’s heavy crude fell to below $14 per barrel — down from $44 or more per barrel in February. On April 22, Brent crude, a global benchmark, fell to a two-decade low of $15.98 a barrel — down from nearly $70 per barrel in early January.

But in the second half of 2020, global oil prices recovered, which helped dampen the double blow of COVID-19 and sanctions on Iran’s economy. By August 2020, the price of Iranian heavy crude was hovering around $40 per barrel, close to pre-pandemic prices. 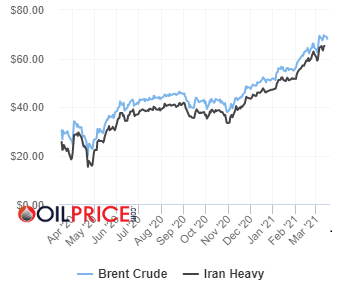 Iran ramped up production and exports as prices rose in late 2020 and into 2021. In the second quarter of 2021, oil and non-oil exports surged. For the first time since the pandemic started, exports exceeded imports, according to the World Bank. 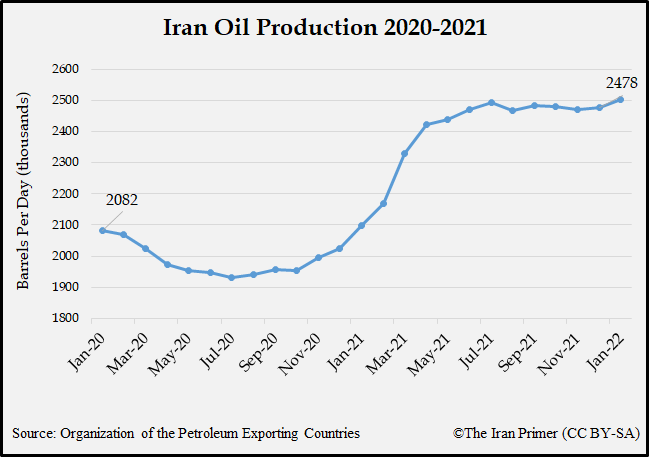 Iran does not publish oil export data, but TankerTrackers.com, which monitors transfers via satellite imagery, estimated that Tehran sold approximately 1.2 million barrels per day on average of crude oil and condensate. China reportedly bought the majority of the barrels. 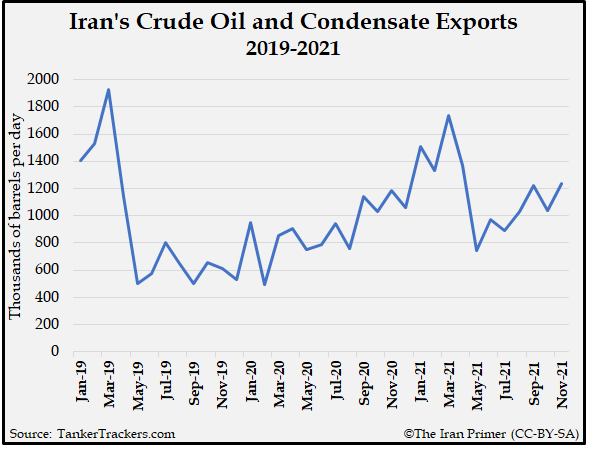 By February 2022, Iranian heavy crude was selling for more than $80 a barrel. The resulting growth in GDP, however, did not translate into job creation, largely because the oil industry is not labor-intensive.

Tess Rosenberg, a research analyst at the U.S. Institute of Peace, and Garrett Nada, the managing editor of The Iran Primer, assembled this report.