How the World Aids Iran on COVID-19

Between early February and mid-October 2021, the international community provided Iran with 92.9 million doses of COVID-19 vaccine. China, Iran’s top trading partner, provided the largest amount, about 90 percent of the doses imported by Iran. Iran gained access to foreign vaccines mostly through sales and, to a lesser extent, donations. It also obtained vaccines, again through sales and donations, through the U.N.-backed COVAX program. As of October 12, Iran had imported vaccines from the following countries: 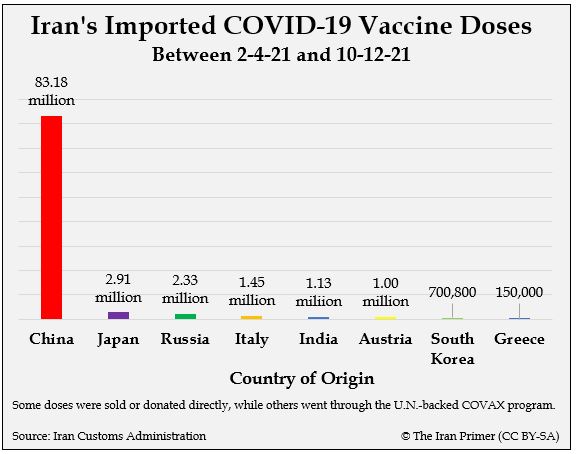 The imported doses were a critical boost to Iran’s lagging vaccination rollout. A fourth wave of the virus began in late March 2021 as Iran was still in the initial phase of its rollout. The elderly, those with underlying health conditions (including war veterans) and health workers were among the first to receive vaccines. But when the fifth and deadliest wave of infections hit in July 2021, only 2 percent of the population of some 85 million had been vaccinated.

Some Iranians traveled to Armenia or the United Arab Emirates to get shots. Others reportedly bought Pfizer and Moderna shots smuggled from Iraq on the black market. In Tehran, two doses of the Moderna or AstraZeneca vaccines could fetch $390 while two doses of Pfizer could go for $1,350.

When President Ebrahim Raisi took office on August 5, only 3 percent of the population was fully vaccinated. The government ramped up vaccination efforts as more imported doses were imported. By mid-August, health services were administering half a million doses per day. As of mid-October, they were vaccinating a million people per day. Between February 9 and October 8, Iran fully vaccinated about 20 percent of the population.

Iran also worked on nine domestic vaccines. As of mid-October, only three had been approved for general use. They included COVIran Barekat, Spicogen (jointly developed with an Australia-based company) and PastoCoVac (a collaboration between Iran’s Pasteur Institute and Cuba’s Finlay Vaccine Institute). As of October 10, Iran had produced 16 million doses of COVIran Barekat and at least 6 million doses of PastoCoVac.

On October 11, the Food and Drug Organization said that Iran would no longer need to import vaccines in November because of domestic production but would continue to take delivery of previously ordered vaccine.

Early Days of the Pandemic

The international community was quick to respond with medical supplies shortly after Iran reported its first deaths from the coronavirus on Feb. 19, 2020. The virus spread across all 31 provinces within a month. Iran became one of the world’s early epicenters and the worst-hit country in the Middle East. By the end of March 2020, 2,657 people had died, according to official tallies. Coronavirus cases traced to Iran showed up in at least 23 countries – from the United States and Europe to the Middle East and New Zealand – spread either by their own nationals who recently visited Iran or Iranian tourists..

The World Health Organization (WHO), the U.N. Children’s’ Fund (UNICEF) and dozens of countries rushed to provide ventilators, masks, gloves, goggles, and other supplies as Iran’s health system struggled to deal with the soaring number of cases. In February and March 2020, more than 30 countries – including Azerbaijan, Britain, China, France, Germany, Kuwait, Japan, Qatar, Russia, Turkey, the United Arab Emirates, and Uzbekistan – either pledged funds or donated medical supplies to the Islamic Republic.

China initially provided Iran with more medical supplies than any other country. On February 28, a Chinese delegation arrived in Tehran with 50,000 test kits and 13 respirators. On March 30, Iranian state media reported that China was shipping around 40 tons of medical supplies daily.

Supreme Leader Ayatollah Ali Khamenei rejected a U.S. offer of aid. “You might give us a medicine that would spread the disease even more or make it last longer,” he said on March 22, 2020. Iranian officials blamed U.S. sanctions for hampering Iran’s ability to acquire medical supplies. In the spring of 2020, Foreign Minister Mohammad Javad Zarif charged the United States with “war crimes” and “economic terrorism.”

Under U.S. law, humanitarian goods are not subject to sanctions, but some American and foreign companies and banks have been reluctant to do business with Iran for fear of running afoul of the complex U.S. sanctions regime. In February 2020, the U.S. Treasury set up a special mechanism with the Swiss government to facilitate the flow of humanitarian goods to Iran.

In January 2021, as shots became available, Supreme Leader Khamenei banned imports of American and British vaccines. “They’re completely untrustworthy,” he said in a televised address. “It’s not unlikely they would want to contaminate other nations.” Khamenei said that Iran would obtain vaccines from “other reliable places,” but did not specify from where. In August 2021, he appeared to soften his position, and Iran’s health ministry clarified that AstraZeneca, Moderna and Pfizer vaccines could be imported as long as they were not produced in the United States or Britain.

On February 4, Russia was the first country to provide Iran with vaccine doses. In April, Tehran reportedly inked a deal with Moscow to buy 60 million doses of Sputnik V. But Russia was slow to deliver. “We realize that Russia, of course, should boost its own production, so we do not see any evil intent in this issue,” Iran’s ambassador in Moscow, Kazem Jalali, said on August 10. “We think that the Russian government is exerting an enormous effort in order to fulfill its contractual obligations.”

As of October 12, Russia had provided only 1.4 million doses of the 60 million promised. Russia separately provided 963,000 doses of AstraZeneca from Russia. At least a third of the AstraZeneca doses were purchased by Iranian businesses for their employees.

Russian Foreign Minister Sergey Lavrov assured his Iranian counterpart, Hossein Amir-Abdollahian, that Moscow would expedite its Sputnik V deliveries. “We also looked into the possibility of organizing as soon as possible the production of the Sputnik V vaccine in the Islamic Republic of Iran,” Lavrov said at a joint news conference in Moscow on October 6. 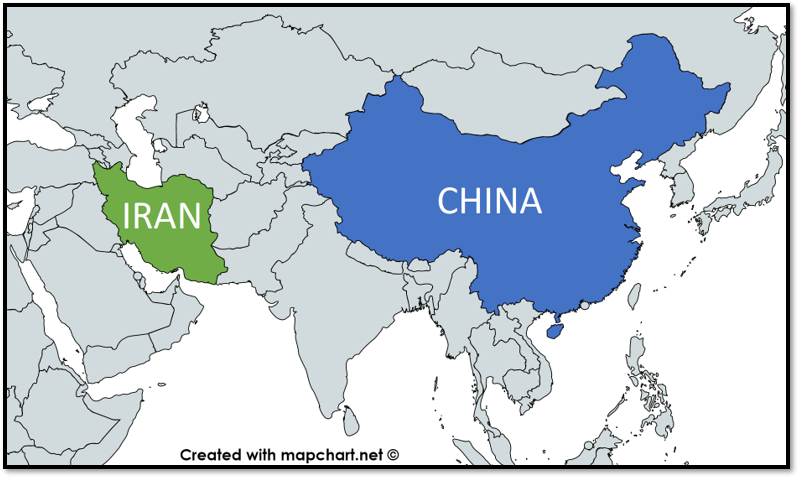 On February 28, China began providing its Sinopharm vaccine. The Asian power contributed the vast majority of doses imported by Iran, mostly through sales and a small amount of donations. By October 12, China had provided 81.7 million doses of Sinopharm and 1.4 million doses of AstraZeneca. The imports reflected Tehran's growing reliance on Beijing, which in turn is a key importer of Iranian oil. In March 2021, the two countries signed a 25-year “strategic partnership” to deepen economic and security ties.

On March 11, India, one of Iran’s top trading partners, provided 125,000 doses to Iran that had been purchased. But India then suspended exports of vaccines for six months while it struggled to deal with its own surge in cases. When India resumed vaccine exports, it gifted 1 million Covaxin doses on October 9.

On July 24, Japan began providing doses of AstraZeneca through the COVAX program. Within a week, Japan had donated 2.9 million doses of AstraZeneca. “This is the largest donation of vaccine by Japan abroad and the fastest vaccine donation under COVAX,” Japanese Foreign Minister Toshimitsu Motegi said on August 22 during a visit to Tehran. “If this support helps strengthen the relations and cooperation between Japan and Iran, it will make me happy.” Japan also donated millions of doses to other Asian countries to bolster its image as a top humanitarian donor.

Between September 8 and 16, Austria donated 1 million AstraZeneca vaccine doses to Iran. “Every shot counts in our worldwide fight against the pandemic - we cannot afford any white spots on the global vaccination map,” Foreign Minister Alexander Schallenberg said.

Iran also purchased millions of doses of AstraZeneca doses through COVAX. The program was co-led by the WHO, Coalition for Epidemic Preparedness Innovations (CEPI) and Gavi. UNICEF aided in deliveries. On April 5, Iran received 700,800 doses produced in South Korea. On May 16, it received 1.45 million doses produced in Italy.

Garrett Nada, managing editor of The Iran Primer, and Tess Rosenberg, a research analyst at the U.S. Institute of Peace, assembled this report.