What were the results of the 2021 presidential election?

On June 19, Iran’s Interior Ministry announced that Ebrahim Raisi, the head of Iran’s judiciary, won the presidential election with 62 percent of the votes, although the majority of Iranians did not turn out. The other three candidates, combined, pulled in less than a quarter of the vote. 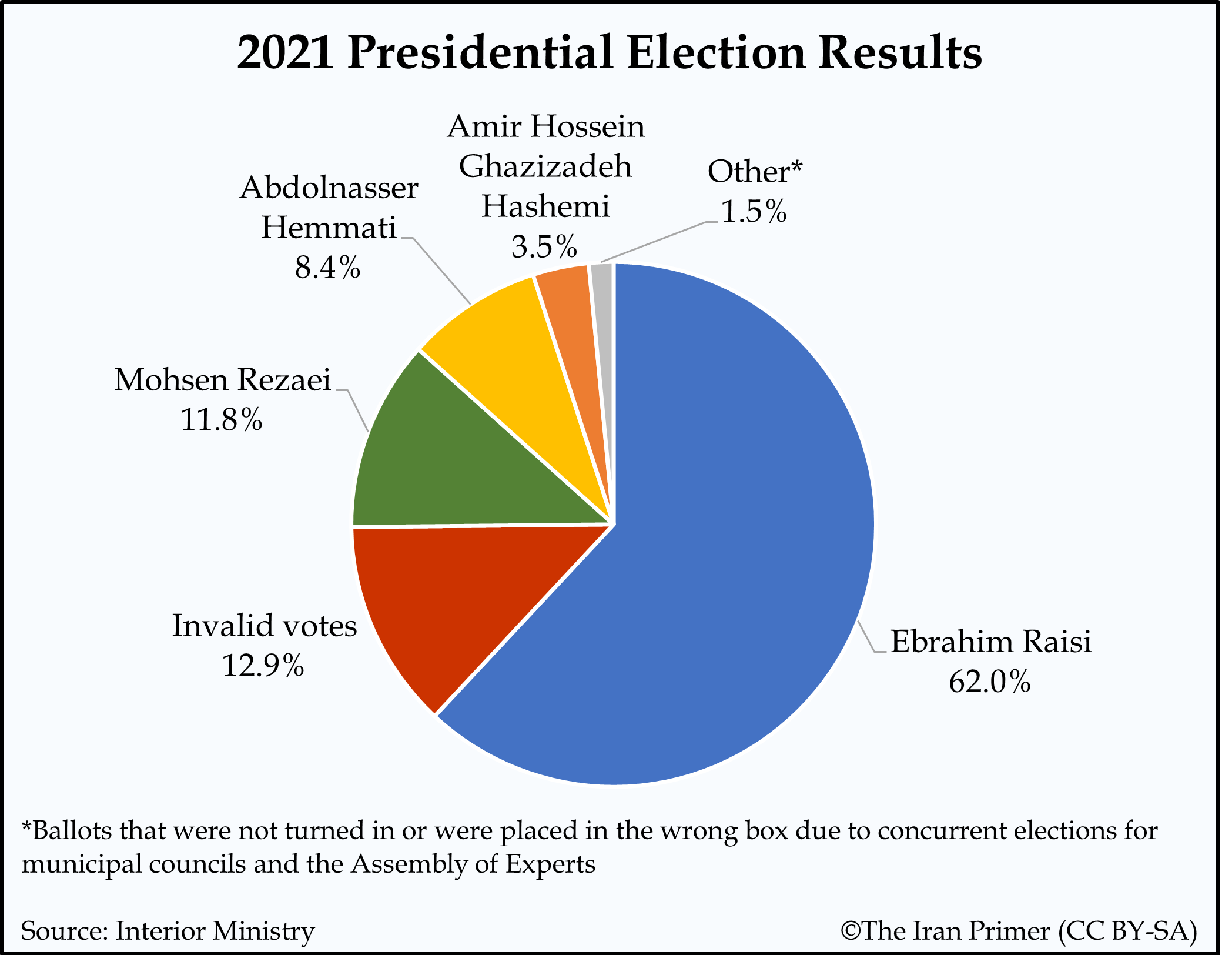 Three candidates dropped out on June 16. 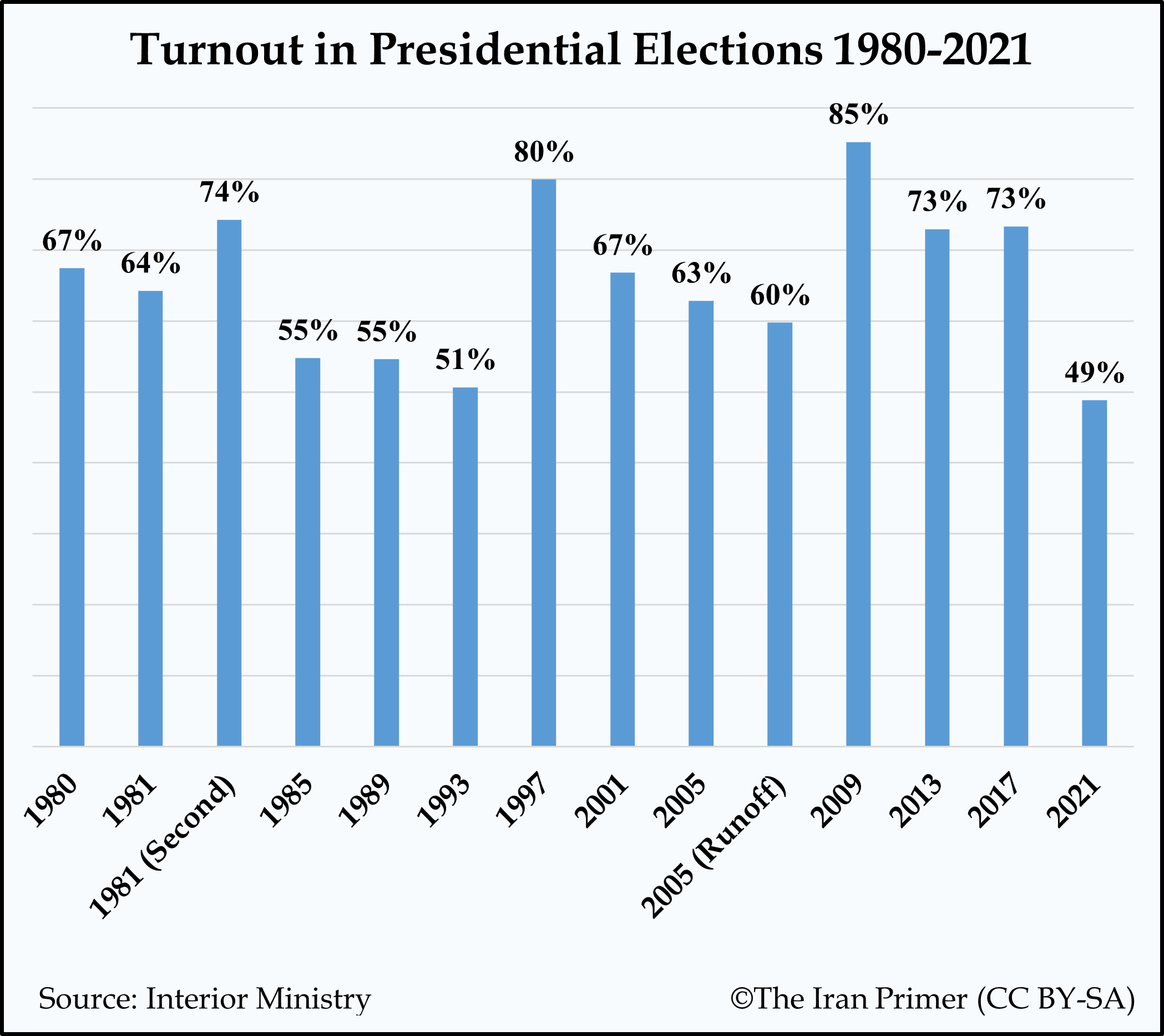 Despite the victory, Raisi will lack a broad public mandate when he takes office in August. The turnout, just 48.8 percent, was the lowest for a presidential election in the history of the Islamic Republic. Only 28.9 million Iranians — out of the more than 59 million eligible voters — participated. Activists had called for a boycott. Compared to previous elections, the low turnout reflected widespread apathy about both the candidates and the future of the revolution. In 2017, 73.3 percent of eligible voters turned out; in 2013, 72.9 percent participated in the poll.

The Interior Ministry reported that 12.9 percent of the ballots were either blank or invalid — at least triple the number of invalid votes in all other elections since 1980. The unprecedented percentage of spoiled ballots, which exceeded votes for the runner-up, suggested that many of them were protest votes. 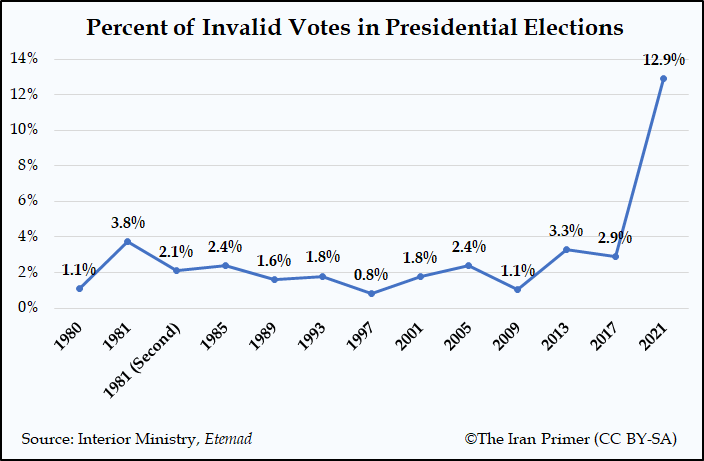 Raisi was the frontrunner throughout the three-week long campaign, which is one of the world’s shortest. As judicial chief and former presidential candidate, he had national name recognition. He came in second — with more than 15 million votes — in the four-way race in 2017, losing to Rouhani, the incumbent. In 2021, he received nearly 18 million votes.

The field was also limited by the candidate vetting process. The Guardian Council, a 12-man panel of jurists, barred several prominent politicians, including current Vice President Eshaq Jahangiri, former Speaker of Parliament Ali Larijani and former President Mahmoud Ahmadinejad. Only seven out of nearly 600 candidates who registered were approved to run. Five were conservatives, one was a centrist, and one was a reformist. In the three televised debates, the other four conservatives refrained from challenging Raisi and instead ganged up on Hemmati. The conservative press also appeared to support Raisi over the other candidates. Three candidates — hardliners Saeed Jalili and Alireza Zakani and reformist Mohsen Mehralizadeh — dropped out of the campaign on June 16, further narrowing the field.

What are the implications of the election?

Raisi could influence the trajectory of Iran for more than four or even eight years. The election was widely seen as more than a contest for the presidency. It could also set the stage for the succession after the death of Supreme Leader Ayatollah Ali Khamenei, who is 82 and has led Iran since 1989. For decades, he has not had a clear protégé. But Raisi, a mid-ranking cleric, is now a potential successor. He has close ties to Khamenei and has earned the support of influential clerics. Iran also has only had one transfer of power between supreme leaders since the 1979 revolution. Khamenei was president before he became supreme leader.

Raisi’s victory was also a milestone in the consolidation of power by hardliners. In 2020, hardliners won roughly three quarters of the 290 seats in Parliament. Hardliners have also long headed the judiciary. The military and intelligence communities are also led by hardliners. The reformist movement has also eroded after President Rouhani’s failure to produce economic benefits from the 2015 nuclear deal negotiated with the world’s six major powers. Many of the reformist candidates were barred both from the 2020 parliamentary election as well as the 2021 presidential election. When Rouhani leaves office, the movement will be left without an obvious leader.

What do we know about the winner? 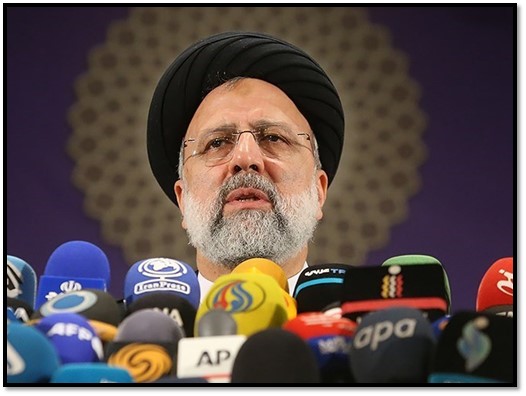 Raisi is a hardline cleric and the chief of the national judiciary. His black turban distinguishes him as a seyyed, or a descendant of the Prophet Mohammed. He holds a doctorate in Islamic jurisprudence and law. Five of Iran’s seven presidents since the 1979 revolution have been clerics. Raisi will be the first with an extensive judicial background but little executive experience.

Raisi was born in 1960 in the city of Mashhad, a conservative bastion in northern Iran. He started at a seminary in the holy city of Qom in 1975 and participated in the 1979 revolution that overthrew the shah. He then became a prosecutor in the early 1980s. As deputy prosecutor general of Tehran, he reportedly participated in the so-called “death commission” that ordered the extrajudicial executions of thousands of political prisoners in 1988. Raisi served as prosecutor general of Tehran between 1989 and 1994 and first deputy head of the judiciary from 2004 to 2014. In 2006, Raisi was elected to the Assembly of Experts, which is charged with appointing and overseeing the supreme leader. After the disputed 2009 presidential election, Raisi supported the brutal crackdowns and showed little tolerance for public dissent. He was Iran’s prosecutor general from 2014 to 2016.

In 2016, Supreme Leader Khamenei appointed Raisi to be custodian of Astan Quds Razavi, a charitable foundation with assets reportedly worth billions of dollars; he held the position for three years. In the 2017 presidential election, Raisi came in second, with 38 percent of the vote in a four-way contest, but he lost to incumbent Hassan Rouhani, who got 57 percent of the vote. Raisi has served as judiciary chief and deputy chief of the Assembly of Experts since March 2019.

Raisi was sanctioned by the U.S. Treasury in November 2019 for his role in domestic repression and actions on behalf of Khamenei. Raisi could be the first Iranian president to be sanctioned by the United States while in office. Iranian diplomats involved in talks to restore full compliance in the 2015 nuclear deal have reportedly pushed for Raisi to be removed from the U.S. sanctions list.

How might Raisi impact Iran’s ties with the outside world?

Raisi is unlikely to dramatically shift Iran’s foreign policy. National security policymaking in Iran is an opaque process. The Supreme National Security Council (SNSC), which includes members of the executive branch, the military, the intelligence community, the judiciary and the supreme leader’s office, deliberates on key decisions. It was instrumental in the debate over terms for the 2015 nuclear deal. All SNSC decisions must ultimately be confirmed by the supreme leader. Raisi, as head of the judiciary, has had a seat on the SNSC since 2019. But as president he will appoint the new national security adviser; Raisi will nominally preside over the council.

During the presidential campaign, Raisi supported the 2015 nuclear deal. He also criticized the United States for withdrawing from the agreement. At his first press conference as president-elect on June 21, Raisi said that he was open to potential negotiations that were in Iran’s national interests. But, he added, “we will not tie the economic situation and people’s [livelihoods] to these negotiations, and we will not allow talks for the sake of talks.” Raisi said that his foreign policy would not be limited to the nuclear deal, but he ruled out a meeting with President Joe Biden. He also rejected any negotiations on Iran’s regional influence or missile program, two issues that the Biden administration has expressed a keen interest in addressing.

Raisi has not discussed the details of his foreign policy, but his statements have generally aligned with those of the supreme leader, whose worldview reflects the anti-Western narrative of the 1979 revolution. Raisi has criticized the outgoing Rouhani administration for depending on trade with the West to improve the economy. Like Khamenei, Raisi has called for boosting domestic production of goods and self-sufficiency to counter the negative impact of sanctions.