On June 22, the United States seized three dozen web addresses affiliated with Iran and its proxies, including Tehran’s flagship international broadcaster Press TV. The Justice Department was able to take down the sites because the domain names were administered and sold by U.S. companies. Thirty-three websites operated by the Iranian Islamic Radio and Television Union (IRTVU) had conducted "disinformation campaigns and malign influence operations," the Justice Department said in a statement. Three others were used by Kataib Hezbollah, an Iraqi Shiite militia group backed by Iran’s Revolutionary Guards. 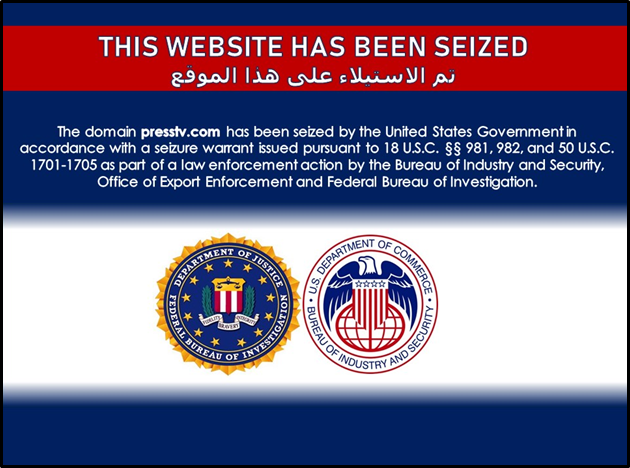 The U.S. seizures disabled the Iranian web addresses and the domains run by Iranian proxy groups. Users who visited them saw a message saying that the “domain” had been “seized by the United States Government.” Tehran protested the domain seizures as “unlawful” and threatened to pursue legal action. The move was “a systematic attempt by the United States to undermine freedom of expression on a global level and to silence independent voices in media,” Foreign Ministry spokesperson Saeed Khatibzadeh said on June 23.

But the impact on some Iranian sites, as in past cases, was short-lived. After its domain “presstv.com” was seized, Press TV advised users to instead visit “presstv.ir,” which is a domain registered inside Iran. The alternative domain is accessible worldwide too.

Domains are alphanumeric addresses that let users access websites on their computer browsers. Domain endings indicate the type of website; dot-coms are used mostly by businesses and commercial websites, while dot-orgs are often used by non-profit websites. But domain endings can also indicate the country where the website is hosted, such as “.ie” for Ireland or “.ir” for Iran.

Companies can sell domains internationally, but purchasers must abide by the laws of the country where the companies are based. In October 2020, the Treasury sanctioned IRTVU for being owned or controlled by Iran’s Revolutionary Guards, which was designated a Foreign Terrorist Organization in 2019. Under U.S. sanctions, IRTVU is not allowed to own or purchase domains or other web services from U.S. companies without permission from the Treasury. For example, “presstv.com” was run by the U.S. company Verisign. IRTVU and Kataib Hezbollah (which was sanctioned by the U.S. Treasury in 2009) had not obtained the required licenses from the U.S. government to continue using the domains after sanctions were imposed.

The United States has seized domain names used by Iran and its proxies at least four other times since January 2020:

The following is a list of known web addresses seized by the U.S. government and a statement by the Justice Department on June 22, 2021.

January 2020: One domain name used by the Revolutionary Guards.

October 2020: 92 domain names used by or on behalf of the Revolutionary Guards.

November 2020: 29 domain names used by or on behalf of the Revolutionary Guards.

“On Oct. 22, 2020, the Office of Foreign Assets Control (OFAC) designated IRTVU as a Specially Designated National (SDN) for being owned or controlled by the Islamic Revolutionary Guard Corps Quds Force (IRGC). SDNs are prohibited from obtaining services, including website and domain services, in the United States without an OFAC license. OFAC’s announcement explained that components of the government of Iran, to include IRTVU and others like it, disguised as news organizations or media outlets, targeted the United States with disinformation campaigns and malign influence operations. Thirty-three of the websites seized today were operated by IRTVU. The 33 domains are owned by a United States company. IRTVU did not obtain a license from OFAC prior to utilizing the domain names.

“Three additional websites seized today were operated by KH. On July 2, 2009, OFAC designated KH an SDN, and the Department of State designated KH a Foreign Terrorist Organization. The announcements described KH as an Iraqi terrorist organization that committed, directed, supported or posed a significant risk of committing acts of violence against Coalition and Iraqi Security Forces. OFAC further explained that the IRGC provides lethal support to KH and other Iraqi Shia militia groups who target and kill Coalition and Iraqi Security Forces. The three domains operated by KH were owned by a United States company. KH did not obtain a license from OFAC prior to utilizing the domain names.

“These website seizures were investigated by the U.S. Department of Commerce’s Bureau of Industry and Security, Office of Export Enforcement and the FBI. The National Security Division’s Counterintelligence and Export Control Section prosecuted the seizure.

“The National Security Division’s Counterintelligence and Export Control Section is investigating this matter in coordination with the FBI’s Counterterrorism Division and Atlanta Field Office.”