On August 3, Supreme Leader Ayatollah Ali Khamenei formally endorsed Ebrahim Raisi as president, the first step in the transition of power. He called on Raisi to “empower the middle and lower classes of society that are shouldering the burden of economic problems.” Khamenei gave Raisi a mandate to overhaul how the government is managed and to harness the capabilities of youth to solve Iran’s problems.

Khamenei framed Raisi’s election in June as a victory over Iran’s adversaries. “A plot had been devised by the political think tanks of the enemies to bring about a boycott on the elections,” he said during the ceremony. “But the people responded firmly by participating in the elections, and the turnout was good.” The turnout, just 48.8 percent, was actually the lowest for a presidential election in the history of the Islamic Republic. Khamenei also claimed that Iran’s enemies were trying to shape public opinion through media.

The transfer of power to Raisi, a hardliner and mid-ranking cleric, is particularly important amid speculation that he is a potential candidate to succeed Khamenei, who is 82. Khamenei has led Iran since 1989, but he has not had a clear protégé. The supreme leader lauded Raisi as “knowledgeable,” “untiring,” and “experienced” in his decree of endorsement.

In a speech at the ceremony, Raisi pledged to remove “tyrannical” sanctions imposed by the United States. “But we will not tie the ... economy to the will of foreigners,” he added. Raisi acknowledged that the public’s trust in government had been “damaged.” He did not elaborate, but he was optimistic about his administration’s ability to quickly tackle pressing problems. “We are in the camp of ‘WE CAN’,” he said. Raisi will be sworn in on August 5. The following are excerpted remarks by Raisi and Khamenei as well as the text of Khamenei’s decree endorsing the new president.

“This ceremony, which is based on the Constitution and is a legacy of the great Imam [Khomeini], has been repeated many times over the past decades. It is a symbol of the transition of the very important responsibility of the government’s executive branch, namely managing the country, in a rational, peaceful and dignified manner. This is a highly significant issue.” 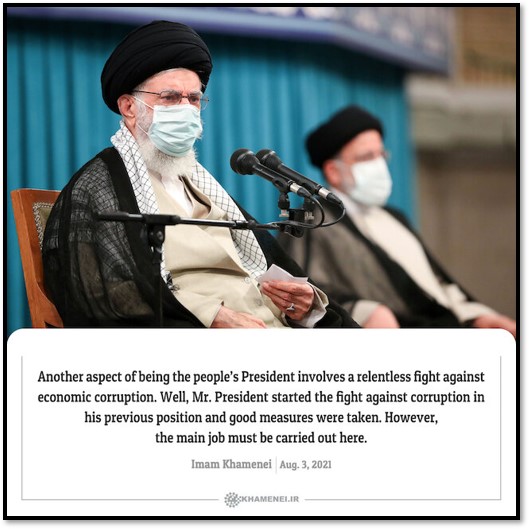 “In other countries, this transfer of power is normally carried out accompanied by conflicts. But in our country, praise God, it is carried out in a calm, safe manner. This was the case in this election too by God’s grace. This is both a sign of the rationality, peace and tranquility that exists among the people and the officials and a sign of political diversity. The administrations that have held office up until today have had various political orientations. Naturally this diversity is a sign of electoral freedom and healthy elections.”

“Undoubtedly, problems can be overcome on the back of these capacities on the condition that they be well understood and tireless and round-the-clock efforts be made.”

“In a transfer of power, new ideas and new resolve enter the field, and this is a source of hope for all those who are highly motivated to serve the country, in particular the youth.”

“A plot had been devised by the political think tanks of the enemies to bring about a boycott on the elections. Inside the country too, some people pursued this idea out of ignorance or perhaps with some ulterior motives. But the people responded firmly by participating in the elections, and the turnout was good. Considering the circumstances that existed at that time, participation was good and it showed the people’s presence on the scene.”

On the 2021 presidential election:

On the new administration:

In the Name of God, the Beneficent, the Merciful

All praise is due to Allah, the Lord of the Worlds, and peace and greetings be upon Muhammad, and upon his pure Household, particularly the remnant of Allah on earth.

I thank God, the Omniscient and Omnipotent, Who has helped Iran once more with His grace and benevolence, to be honored in its political, social test of the presidential elections. Our esteemed nation displayed the authority of its vote over the affairs of the country with its significant, honorable presence in complex, difficult circumstances. By electing a popular, distinguished personage from among the descendants of the Prophet and a scholar who is adorned with great piety and wisdom and who has a brilliant managerial performance sheet, the people of Iran have shown their firm determination to tread the enlightened path of the Revolution, which is the path of justice, progress, freedom and dignity.

Today, our dear country is thirsty for valuable service and is ready to make a leap in all areas. The country needs competent, jihadi, intelligent, courageous management that can organize the manifest and hidden capabilities of the nation - in particular those of the youth, which are much greater in scope than the problems. A management is needed that can bring these capabilities into the field for constructive work and endeavor, eliminate the obstacles in the way of production, seriously pursue policies for strengthening the national currency and which can empower the middle and lower classes of society that are shouldering the burden of economic problems. Such a manager can smooth the path for the worldly and spiritual ascendence of the Iranian nation and accelerate the movement of the country toward the status that it deserves.

While thanking our dear people and in accordance with their choice, I endorse the victory of the knowledgeable, untiring, experienced, popular scholar, Hojjat al-Islam wal-Moslimeen Sayyid Ebrahim Raisi, and I appoint him as the President of the Islamic Republic of Iran.

I ask God, the Exalted, to bestow success and honor on him and his colleagues. I wish to remind everyone that the opinion of the nation and my endorsement will be with him as long as the President continues to travel the straight path of Islam and the Revolution. With God’s grace, this is the way it will be, God willing.