Tensions between the United States and Iran created a political crisis in Baghdad in September after months of attacks on U.S. personnel and facilities by Iraqi militias armed, trained and aided by Tehran. The militias targeted U.S. bases, supply convoys and diplomatic facilities almost daily in September. “We have had more indirect fire attacks around and against our bases the first half of this year than we did the first half of last year,” General Kenneth McKenzie Jr., the head of U.S. Central Command, told NBC News on September 10. The escalation follows the U.S. assassination in January of General Qassem Soleimani, the head of Iran’s elite Qods Force, and Abu Mahdi al Muhandis, chief of Iraq’s Kataib Hezbollah militia and the deputy head of Iraq’s Popular Mobilization Forces (PMF). The PMF is an umbrella for some 60 militias that operate in separate brigades. 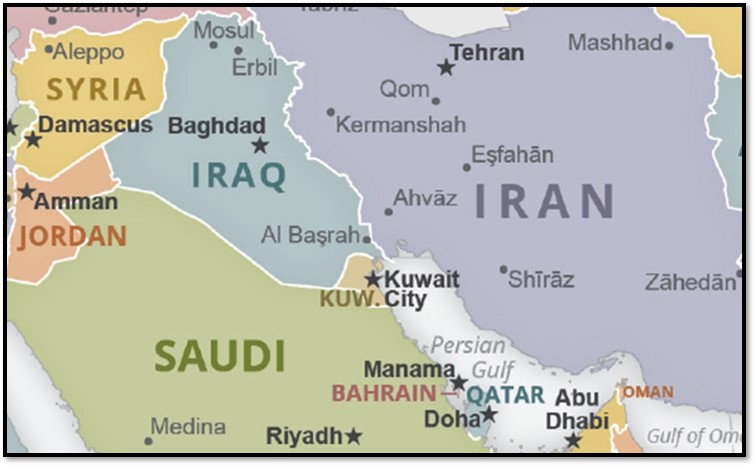 The crisis reached a peak on September 20 when Washington warned Baghdad that it would soon close its fortified embassy in Baghdad unless Iraq stopped the militia attacks and brought the diverse PMF factions under state control. Secretary of State Pompeo’s warning, given in separate phone calls with President Barham Salih and Iraqi Prime Minister Mustafa al Kadhimi, was reportedly a surprise to Iraqi officials. “We hope the American administration will reconsider it,” Ahmed Mulla Talal, a spokesman for Kadhimi said on September 27. “There are outlaw groups that try to shake this relationship, and closing the embassy would send a negative message to them.”

Some U.S. media reported that the militias were plotting a direct attack on U.S. diplomats. More than 3,000 troops are deployed in Iraq; the U.S. Embassy, which has hundreds of diplomats and employees, is one of the biggest in the world.

Kadhimi later acknowledged that U.S. officials were worried about Iraq’s militias. The new government, formed in May, had started to confront the broader “militarization” of Iraqi society, Kadhimi told journalists after seeing Trump. “Any weapons outside government control will not be tolerated.” But Iraqi security forces also need to be strengthened to contain the array of militias—Sunni, Shiite, Kurdish and Christian—that have proliferated since the 2003 U.S. invasion toppled President Saddam Hussein. “I have a paper sword. I need to turn it into a wooden sword, then eventually a metal sword,” he said. “I cannot afford to go to a confrontation while my tools are insufficient.”

Iran has emerged as the most influential foreign player in Iraq – politically, militarily and economically – since U.S.-led forces toppled Saddam Hussein’s regime in 2003. Predominantly Shiite Iran took advantage of deep cultural and religious ties with Iraq’s Shiite majority – and a 900-mile border – to spread its influence. Since 2003, successive Iraqi governments have been caught in the middle of the U.S.-Iran rivalry. “It is a bitter fact that sometimes both countries were deciding who will be the next prime minister” in Iraq, Foreign Minister Hussein said on August 21. “The conflict between Washington and Tehran reflects itself inside Iraq... But we need both of you. One of them is our neighbor and a big power in the region. And the other one is our ally and a big power in the world.”

Iran also fostered the creation of dozens of predominantly Shiite militias that became pivotal in countering ISIS in 2014 and later in menacing U.S. troops. On December 27, 2019, Kataib Hezbollah launched rockets at the K1 military base near Kirkuk, which housed U.S. military service members and Iraqi personnel. The attack killed a U.S. civilian contractor and wounded four U.S. service members and two Iraqis. The death of the contractor led to an escalation in U.S.-Iran tensions resulting in the U.S. killing of Soleimani and Muhandis. Iran retaliated by firing more than a dozen missiles at two Iraqi military bases housing U.S. troops.

From January to September 2020, Iraqi militias carried out more than 120 attacks, according to Michael Knights at the Washington Institute for Near East Policy. They included: 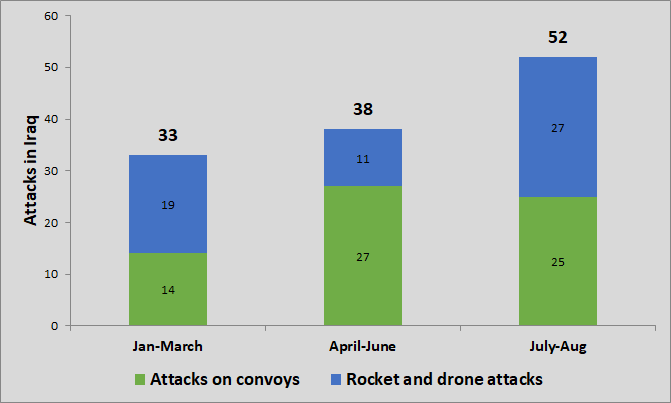 The U.S.-led coalition “acknowledges an increase in low level attacks this summer against the Iraqi Security Forces by outlaw armed factions,” according to a statement by U.S. Central Command Combined Joint Task Force – Operation Inherent Resolve. “These outlaw groups are attacking Iraqi contracted civilian logistics convoys who are transporting logistical support of the ISF and Coalition in the fight against Daesh [ISIS].” U.S. Central Command uses the term “outlaw groups” to refer to the full range of militias operating in Iraq.

The attacks have been “steady harassment” but do not pose a serious threat to U.S. military forces, according to Knights. But the U.S. embassy in Baghdad was highly vulnerable to attack or hostage-taking in the run-up to the U.S. election, a “high-threat period,” he said. Kataib Hezbollah supporters stormed the U.S. Embassy in December 2019, one of the incidents that triggered the assassination of Soleimani and started the ongoing cycle.

Iraq reacted with major diplomatic and military initiatives. On September 24, Falih al Fayadh, the chairman of the PMF and a former Iraqi national security adviser, condemned attacks carried out in the name of the group. Attacks on diplomatic missions “undermine the state and its authority,” the Fatah Alliance, a parliamentary block of pro-Iran parties, said in a statement. Fayadh also fired two leaders of separate PMF factions—Sayyed Hamed al Jazaeri of Saraya al Khorasani (the 18th PMF Brigade) and Waad Qaddo of Shabak in the Nineveh Plains (the 30th PMF Brigade).

Kadhimi also dispatched Foreign Minister Fuad Hussein to Iran to help deescalate tensions. Iranian President Hassan Rouhani told Hussein that the presence of U.S. forces in the region was “detrimental to regional security and stability.” After two days of talks, Iraq’s foreign ministry said that Iraq and Iran agreed that all Iraqi factions and parties should cooperate with the Baghdad government “to face the crises on Iraq and the region, as conflicts on the Iraqi arena may negatively affect stability in the region.” Iranian Foreign Minister Mohammad Javad Zarif said that he emphasized the “imperative of protection of diplomatic posts” in his meeting with Hussein.

“Iraq is keen on enforcing the rule of law, the state's monopoly on having weapons, protecting foreign missions, and diplomatic buildings,” Kadhimi told the foreign diplomatic corps in Baghdad on September 30. “Those who carry out attacks on foreign missions are seeking to destabilize Iraq and sabotage its regional and international relations.”

On October 10, a group of militias, the “Iraqi Resistance Coordination Commission,” released a statement saying that they would suspend attacks on U.S. targets if the Iraqi government presents a timetable for the departure of U.S. troops. The conditional ceasefire “includes all factions of the (anti-U.S.) resistance, including those who have been targeting U.S. forces,” Kataib Hezbollah spokesman Mohammed Mohi told Reuters. He urged the government to implement a non-binding resolution passed by parliament in January to expel foreign troops from Iraq. If U.S. troops do not leave, the militias “will use all the weapons at their disposal,” Mohi warned.

On September 10, McKenzie praised Iraq for doing a “pretty good job” of protecting U.S. forces. “They've been responsive when people have fired rockets at us. They've gone out there to try to find them.” The attacks had not been “particularly lethal,” he said. The Iraqi militias backed by Iran have not been using their “high-end weapon systems. For whatever reason, it may be by design, we don't know, they're just not that successful at hitting anyone. And that's a blessing.”

A second issue between Washington and Baghdad is Iraq’s dependence on Iranian energy. The United States has sanctioned all Iranian oil exports but has been forced to give Iraq short-term waivers because it has no convenient or affordable alternatives. During Kadhimi’s visit to Washington, Iraq’s oil and electricity ministers signed agreements with five U.S. companies, including Chevron Corp and General Electric, to develop Iraq’s energy sector. The deals are worth $8 billion to the American companies. But they may take months or longer to fulfill. “Iraq currently has no choice but to import natural gas and electricity from Iran,” Kadhimi acknowledged on August 20. In late September, the United States extended a sanctions waiver, but for 60 days instead of the 120 days granted in May. In November, the United States extended it again but only for 45 days.

Iran responded with sanctions on top U.S. officials in Iraq, including Ambassador Matthew Tueller, Deputy Chief of Mission Steven Fagin and Consul General in Erbil, the capital of the Kurdish region, Rob Waller. The foreign ministry alleged that the three men were involved in “acts of terror” against Iranian interests, including the U.S. killing of Soleimani.

The following are profiles of militias that have been the most aggressive against U.S. forces, according to Knights. All were part of the PMF, an umbrella group of some 60 old and new militias formed in mid-2014 in response to ISIS’ capture of wide swaths of Iraqi territory.

Garrett Nada is the managing editor of The Iran Primer at the U.S. Institute of Peace. Follow him on Twitter @GarrettNada.