Iran and Venezuela have formed a strategic partnership to circumvent punitive U.S. sanctions imposed on both countries by the Trump administration. In October 2019, Iranian President Hassan Rouhani commended Venezuela’s “praiseworthy” resistance to U.S. pressure. “All their [U.S.] conspiracies against us have failed,” Rouhani said in a meeting with Venezuelan President Nicolas Maduro on the sidelines of the Non-Aligned Movement Summit in Azerbaijan. “Iran and Venezuela have always supported each other in all international and political arenas and will continue to do so.”

Iran-Venezuela ties developed in the 1960s—when the shah was still in power and Venezuela was a young democracy—with cooperation on oil. In 1960, they were two original members—along with Iraq, Kuwait and Saudi Arabia—of the Organization of Petroleum Exporting Countries (OPEC). But under both the monarchy and the theocracy, Iran’s relations with Venezuela were minimal until Hugo Chávez was elected president of Venezuela in 1999.

Chávez first visited Iran in May 2001 with a high-level delegation of oil industry, economic and diplomatic officials. In a speech, the Venezuelan leader said that Iran and Venezuela shared a common resistance to U.S. “hegemony and imperialism” and vowed to increase trade and cooperation with Iran.

President Khatami and President Chávez in Tehran in 2004

During the presidency of Mohammad Khatami, Iran and Venezuela steadily increased trade and energy cooperation. In March 2005, President Khatami signed Iran’s first free trade agreement with Venezuela during a visit to Caracas. The agreement, worth $1 billion, included cooperation in mining, shipping, the marine trade, and the oil and gas industry. At the end of Khatami’s term in 2005, Chávez presented him with the Golden Key of the City of Caracas as a token of gratitude.

Both ideologues who often railed against the United States, Iranian President Mahmoud Ahmadinejad and Chávez became political and commercial allies. Between 2005 and 2012, the two countries signed more than 270 accords, including trade deals and agreements on construction projects, automobile production, energy initiatives and banking programs. The two leaders also became personal friends. They often referred to each other as “brothers,” and Chávez once called Ahmadinejad “the gladiator of anti-imperialist struggles.” In 2006, Ahmadinejad presented Chávez with the golden High Medallion of the Islamic Republic Chávez a visit to Tehran. 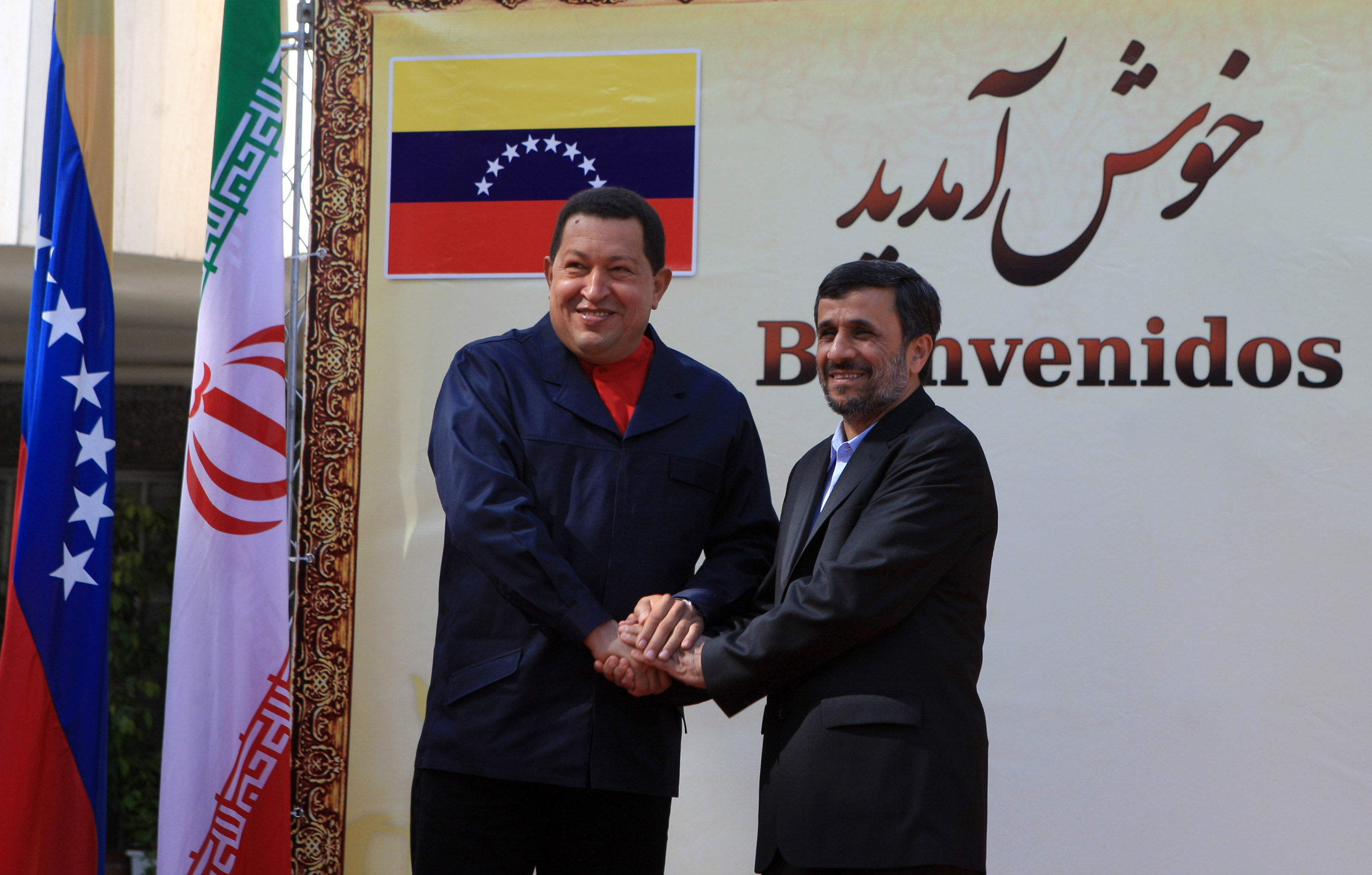 President Ahmadinejad and President Chávez in Tehran in 2009

Cooperation in the oil and gas industry increased during the Ahmadinejad years. In 2009, Iran and Venezuela established a binational development bank in Caracas with a $200 million investment to support joint economic, industrial and mining projects. Later that year, the countries established a joint oil company and agreed to invest $760 million in each other’s energy sectors.

Chávez died in office in 2013 and was replaced by his Vice President Nicolas Maduro. Ties between Iran and Venezuela diminished. President Rouhani did not initially give priority to relations with Latin America. But in June 2015, the two countries signed six agreements in the economic, financial, technological and scientific fields. In August 2016, Iranian Foreign Minister Mohammad Javad Zarif met with President Maduro in Caracas and vowed to increase economic cooperation. 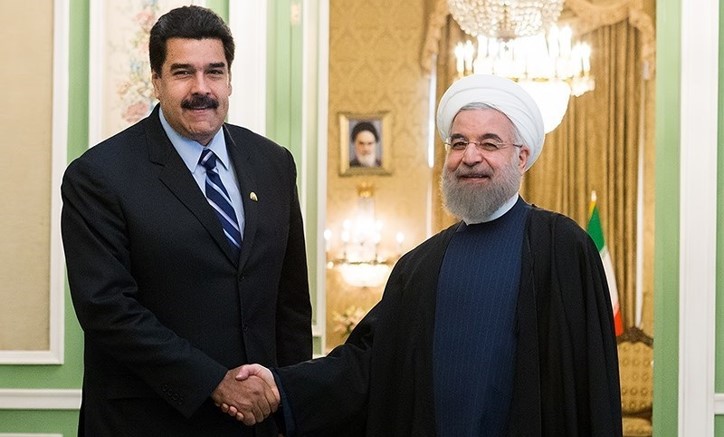 President Rouhani and President Maduro in Tehran in 2015

In 2020, Tehran and Caracas boosted cooperation in the oil and gas field to circumvent U.S. sanctions. On April 23, Venezuela announced that it had received materials from Iran to help restart the Cardon refinery, which could produce up to 310,000 barrels of gasoline per day. Planes operated by Iran’s Mahan Air reportedly delivered catalysts, which are chemicals needed to produce gasoline, to Las Piedras airport on the Paraguana peninsula in western Venezuela, where the refinery is located. The United States accused Iran of accepting payment in gold bars to help rebuild Venezuela’s ailing oil industry.

In May, Venezuela’s refining capabilities reportedly increased from 110,00 barrels per day (bpd) to about 215,000 bpd after the arrival of the spare parts from Iran.

May: Chávez visited Iran for the first time. The Venezuelan leader commended Iran on its resistance to the United States and vowed to increase trade ties with the Islamic Republic.

March 12: President Khatami inked several bilateral accords during a visit to Caracas, including cooperation on geological and mining projects, shipping and marine trade, and a memorandum of understanding on oil, gas and petrochemistry. The agreements were worth a total of $1 billion. Chávez gifted Khatami the Golden Key of the City of Caracas.

July: Chávez and his oil minister, Rafael Ramírez, visited Tehran and signed agreements for the joint production of nearly a dozen products, including a $4 billion investment in two Venezuelan energy projects by Iranian company Petropars Ltd. The two countries also began construction of a joint methanol facility on Iran’s Persian Gulf coast with an annual capacity of 1.65 million tons.

Iranian President Mahmoud Ahmadinejad praised Chávez as “the brother of the whole Iranian nation” and presented him with the golden High Medallion of the Islamic Republic. “We stand by Iran at every moment, in any situation,” Chávez said upon accepting the award. 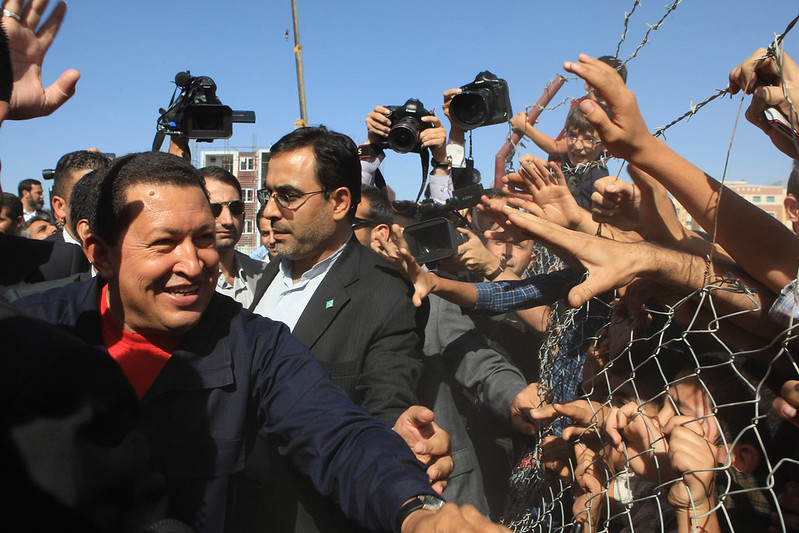 A crowd flocked to see Chávez during a trip to Tehran

January 13: President Ahmadinejad met with President Chávez in Caracas to discuss strengthening trade ties. During the talks, Iran and Venezuela agreed to establish a $2 billion investment fund “with the aim of supporting joint economic, industrial and mining projects as well as speeding up the current projects.” Ahmadinejad and Chávez also agreed to press OPEC for output cuts to increase oil prices, which were at a 19-month low.

March: Iran and Venezuela established a binational development bank in Caracas, the Banco Internacional de Desarrollo. The bank, which was a subsidiary of the Export Development Bank of Iran, was funded at $200 million to support “joint economic, industrial and mining projects as well as speeding up the current projects,” according to Iranian state media.

April: Iranian Defense Minister Mostafa Mohammed Najjar met with Venezuelan officials in Caracas to discuss defense cooperation. It was the first visit by an Iranian defense minister to Venezuela since 1979 Iranian Revolution. The two countries reportedly shared sensitive information on their military developments and capabilities and agreed to joint training exercises.

Iran and Venezuela agreed to invest $760 million in each other’s energy sectors. Venezuela pledged to export 20,000 barrels of gasoline per day to Iran.

January: President Ahmadinejad met with President Chávez in Caracas. The two leaders signed agreements in the areas of industry, science, technology and politics. They vowed to unite in resistance to the United States. “It's clear they are afraid of our development,” Ahmadinejad said. “Our weapon is logic. Our weapon is culture. Our weapons are human values.”

March 5: Chávez died after 14 years in office. Ahmadinejad attended his funeral in Caracas. He declared a national day of mourning in Iran and offered a personal tribute to the late president. “He is alive, as long as nations are alive and struggle for consolidating independence, justice and kindness,” Ahmadinejad wrote in a letter published by the semi-official Mehr News Agency. “I have no doubt that he will come back, and along with Christ the Savior, the heir to all saintly and perfect men, and will bring peace, justice and perfection for all.”

January 12: President Maduro met with President Rouhani in Tehran during his tour of OPEC countries. The two leaders pledged to work together to stabilize global oil prices. Maduro said that plummeting oil prices were the product of a “geopolitical war” with the United States.

November 23: President Rouhani met with President Maduro in Tehran to discuss oil prices and trade ties. “Tehran is fully ready to expand scientific and educational cooperation with the Venezuelan part, to meet Venezuelans trade and industrial demands and to implement joint projects based on the previous agreements,” Rouhani said .

August 26: Iranian Foreign Minister Zarif met with President Maduro in Caracas to discuss trade ties. Venezuela launched a special commission to push forward bilateral deals signed in 2015. “We are advancing in our bilateral cooperation as well as in matters of mutual interest for economic development...we are going to create a new dynamism in Venezuela-Iran relations,” President Maduro said.

April: Iran’s Mahan Air resumed commercial flights between Tehran and Caracas. Flights between the two capitals were halted in 2010.

November: Iran and Venezuela signed new scientific and technological agreements  in “education, nanotechnology, biotechnology and engineering," according to the Venezuelan government. Caracas did not provide additional details about the deal.

January 8: Venezuelan Defense Minister Vladimir Lopez condemned the U.S. killing of Iranian General Qassem Soleimani. “I extend my heartfelt condolences to you and the people of Iran on behalf of the Venezuelan armed forces, the people of my country and all the commanders.” Lopez said in a phone call to Iranian Defense Minister Amir Hatami. “We will side with Iran to fight the (global) arrogance.”

May: The first Iranian oil shipments arrived in Venezuelan waters. The flotilla of five ships carried 1.5 million barrels of gasoline. “Iran and Venezuela have always supported each other in times of difficulty,” Venezuelan Foreign Minister Jorge Arreaza tweeted. “Today, the first ship with gasoline arrives for our people.” President Rouhani warned of retaliation if the United States interfered with the gasoline shipment. “We hope the Americans will not make a mistake,” he said.

June 21: The Golsan, an Iranian cargo ship, delivered 23,000 tons of food to Venezuela to stock the first Iranian supermarket. The Iranian embassy in Caracas praised the delivery as "another success in friendly and fraternal relations."

November: Iranian Foreign Minister Zarif traveled to Venezuela as part of a five-day trip to Latin America. He met with President Maduro and his Venezuelan counterpart, Foreign Minister Jorge Arreaza. "[This] visit ratifies the unshakeable spirit of the strategic relations of cooperation and solidarity between Iran and Venezuela," Maduro tweeted after their meeting.

December: Iran sent a new flotilla of 10 tankers to resupply Venezuela with oil. Abrams, the U.S. special representative for Iran and Venezuela, said that Washington is “watching what Iran is doing and making sure that other shippers, insurers, ship owners, ship captains realize they must stay away from that trade.” Iran also used false call-signs to help Venezuela export its oil, Bloomberg reported.

May: U.S. officials told Politico that two Iranian warships – one potentially carrying seven fast attack craft – could be headed to Venezuela. Tehran warned the United States not to interfere with the transit of the two warships. “Iran is always present in international waters and has this right under international law," Foreign Ministry spokesperson Saeed Khatibzadeh told reporters. "No country can violate this right."

June: The two Iranian warships rounded the Cape of Good Hope and entered the Atlantic Ocean. The Pentagon said that delivery of weapons to Venezuela would be a "provocative act" and a "threat" to U.S. partners in the Western Hemisphere. "We would reserve the right to take appropriate measures - in concert with our partners - to deter the delivery or transit of such weapons," spokesperson John Kirby told CNN in a statement. The Biden administration also warned Venezuela and Cuba not to permit the warships to dock. The two ships turned off course and instead headed north up the African west coast, Politico reported on June 17.

July: The two Iranian warships had sailed north past Spain and were nearing the English Channel, according to satellite imagery. They were likely headed to the Baltic Sea for a Russian naval parade on July 25, U.S. Naval Institute News reported.

Today we spotted the #MAKRAN steam up the northwest coast of France, some 65km west-by-southwest of Penmarch. They didn't continue in a straight line from Portugal but seem to have taken a minor detour to scope the coastline. pic.twitter.com/sDgkxzk1jB

Photo Credits: Chávez and Khatami by Farzad Khorasani via Wikimedia Commons CC by 4.0

Chávez and Ahmadinejad by Prensa Miraflores via Flickr CC by 2.0

Chávez in Tehran by Prensa Miraflores via Flickr CC by 2.0

Rouhani and Maduro via President.ir