On August 11, 2020, Nasrin Sotoudeh, Iran’s most prominent human rights lawyer, went on hunger strike to demand the release of political prisoners amid the COVID-19 pandemic. In a letter from Tehran’s infamous Evin prison, she warned that inmates were being denied due process and access to legal representation. “It is impossible to continue their detention under these oppressive conditions,” wrote Sotoudeh. Sotoudeh said that interrogators acted with impunity in extrajudicial proceedings. Prisoners “are treated as if there are no laws and none of them have the right to any legal outlets,” she added.

On September 19, Sotoudeh was transferred to an intensive care unit at Taleghani Hospital due to heart and breathing problems. “The security authorities have done everything to her with the aim of creating one of the most inhuman conditions in the hospital, to isolate her from the outside world, to prevent any contact so that she can submit to the will of the security guards,” according to Sotoudeh’s husband, Reza Khandan. But she was transferred back to Evin prison on September 24, despite her poor health, according to Khandan. Born in 1963, Sotoudeh has been a vocal critic of Iran’s judicial process. She has represented women’s rights activists, victims of domestic abuse, minors on death row, journalists and Kurdish rights activists. In March 2019, Sotoudeh was convicted of nine crimes and sentenced to a total of 38 years in prison and 148 lashes. Among the charges, she was sentenced to 12 years for “encouraging corruption and prostitution,” according to her husband, Reza Khandan, for representing a woman arrested for peacefully protesting compulsory hijab (head covering). Sotoudeh must serve 12 years out of her sentence before becoming eligible for parole. The following is the full text of Sotoudeh’s letter, an update from her husband and a profile of the lawyer.

In the midst of the Covid-19 crisis which has gripped Iran and the world, the conditions of political prisoners [in Iran] have become so difficult that it is impossible to continue their detention under these oppressive conditions. Their legal cases are made up of unbelievable charges of espionage, corruption on earth, acts against national security, corruption, prostitution, and formation of a unlawful group on the Telegram [social media platform] that can result in up to ten years of imprisonment or even execution.

Many defendants are denied access to an independent attorney or free (unchecked) communication with their own attorneys from the start of their cases through the sentencing. The Revolutionary Court judges recklessly and repeatedly tell the political defendants that they issue verdicts solely based on reports from the intelligence and security agencies and the interrogator tells them the final verdict in advance, from the moment of their arrest. Human rights attorneys are sent to prison because the Revolutionary Court judges become furious with them. Those who face unbelievably heavy charges receive maximum and even more than maximum sentences. Then, a political prisoner who has been sentenced under such unjust conditions incredulously hopes for a legal remedy.

Courts of appeals, conditional parole, sentence suspension, postponement of sentences, and a new law that insists on minimum charges have been annunciated, but in extrajudicial proceedings, the exercise of all these legal rights are left to interrogators who shut all doors [to freedom] for political prisoners. Many prisoners are now eligible for conditional parole and many would be released with the enforcement of the new law, but prisoners are treated as if there are no laws and none of them have the right to any legal outlets. Prisoners' correspondence to find legal ways out [of the situation] have remained unaddressed.

As all correspondences remain unanswered, I am going on a hunger strike, demanding the release of political prisoners.

Hoping for justice in my homeland, Iran.

"Forty-three days ago, Nasrim Sotoudeh started with her hunger strike.

"Last Saturday, she was transferred from the Evin-Prison to Taleghani Hospital in Tehran due to her poor health condition and breathing, as well as heart problems, and is currently in the intensive care unit there.

"The security authorities have done everything to her with the aim of creating one of the most inhuman conditions in the hospital, to isolate her from the outside world, to prevent any contact so that she can submit to the will of the security guards. One of the worst officers has been entrusted with this task as head of the security team.

"As relatives of Nasrin Sotoudeh, we neither have access to medical documents nor do we have the opportunity to inquire about the treatment or the medical results and findings. As relatives, we are constantly being verbally abused by the security team and threatened with arrest.

"The hospital violates all rules and behaviors that govern the relationship between the doctor and patient and is intimidated by the security team.

I tried twice to meet the head of the hospital, but to no avail. I wasn't even allowed into his anteroom.

The patient who is said to have serious heart problems is put under massive stress by the security team. When we tried to communicate with Nasrin Sotoudeh, the same security officer pushed her back into the intensive room with her wheelchair and angrily slammed the door behind him. We could then hear the screams of Nasrin, who was previously exhausted and barely able to speak to us.

Although only the hospital staff are authorized to move the patients in wheelchairs, Nasrin Sotoudeh is transported in the wheelchair by the security team, even though their actual job is only to guard her.

Nasrin is very weak and her general condition is very poor (lack of white blood cells). Nevertheless, she was placed in the general intensive care unit with ten other patients and their relatives for two days. The risk of being infected with Covid-19 in such an environment seems to be very high.

Nasrin Sotoudeh, who was born in 1963, is one of the most prominent human rights lawyers in Iran and a vocal critic of its judicial process, treatment of women and death penalty. She has represented Nobel Prize winner Shirin Ebadi as well as women’s rights activists, victims of domestic abuse, minors on death row, journalists and Kurdish rights activists. 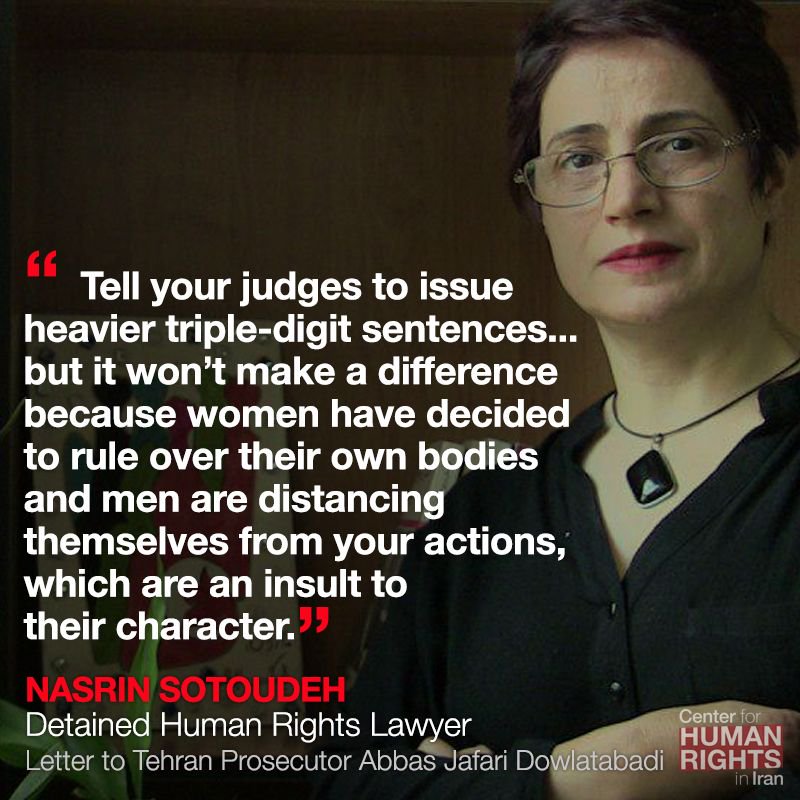 Before the 2009 presidential election, Sotoudeh was an active member of the Iranian Women’s Coalition, which demanded gender equality in the law. After the post-election protests, Sotoudeh represented the families of demonstrators killed by government forces. She was arrested after a raid on her home in September 2010. She was charged with “propaganda against the system” as well as “acting against national security.”  In January 2011, she received an 11-year prison sentence that was later reduced to six years after international outcry from the United Nations and international human rights groups. Sotoudeh was given early release in September 2013.

In 2013, Sotoudeh co-founded the Campaign for Step By Step Abolition of the Death Penalty, known by the Farsi acronym LEGAM. LEGAM was established to advocate legislation that would abolish capital punishment. In early 2018, she took the case of Narges Hosseini, an activist arrested for protesting the law requiring hijab, or head covering, who refused to attend her own trial. Hosseini “objects to the forced hijab and considers it her legal right to express her protest,” Sotoudeh said. “She is not prepared to say she is sorry.”

On June 4, 2018, Sotoudeh criticized Iran’s Criminal Procedures Regulations, which forces defendants facing security charges to select a lawyer from a list pre-approved by the judiciary. “A number of lawyers have said they are ready to hold a protest sit-in if necessary,” Sotoudeh said. On June 13, 2018, she was again arrested. According to Sotoudeh’s husband, government agents did not explain the charges but informed her that she had been sentenced to five years in prison. In August 2018, Payam Derafshan, Sotoudeh’s lawyer, reported that the five-year sentence was based on a charge of “espionage in hiding” issued in absentia in 2015. The subsequent charges against her included “membership in the Defenders of Human Rights Center, the LEGAM group (against capital punishment), and the National Peace Council,” as well as “encouraging people to corruption and prostitution.” The “corruption and prostitution” charge may have been connected to Sotoudeh’s defense of Hosseini.

Sotoudeh refused to appear at her trial in December 2018 to protest the state’s refusal to let her use her own attorney. On March 11, 2019, she was convicted of seven offenses and sentenced to 148 lashes and 33 years in addition to the earlier five-year sentence. Under Article 134 of Iran’s penal code, a person convicted of multiple offenses can serve the maximum sentence for the biggest offense. Sotoudeh later claimed that the longest sentence was twelve years for “encouraging…  corruption and prostitution.”

The United States, United Nations, European Union and international human rights groups condemned Sotoudeh’s sentence, but she refused to appeal the case on grounds that she did not accept the legitimacy of the verdict or the judicial system. In November 2019, the Council of Bars and Law Societies of Europe (CCBE) dedicated its 2019 Human Rights Award to Sotoudeh as well as to Mohammad Najafi, Amir Salar Davoudi and Abdolfatah Soltani, all Iranian human rights lawyers.

In March 2020, Sotoudeh wrote an open letter for International Women’s Day. She called for an end to the “systematic” violation of women’s rights in Iran and appealed to the Iranian and U.S. governments to set aside their rivalries for the sake of their female citizens. Ten days later, Sotoudeh began a hunger strike to demand freedom for all political prisoners during the COVID-19 pandemic. Three activists imprisoned in Evin joined her protest. Nasrin claimed that she understood the medical risks of beginning a hunger strike during the Coronavirus outbreak and that she resorted to the protest as a “last resort.”

In late July 2020, Sotoudeh’s husband, Reza Khandan, discovered that the judiciary had blocked her bank account starting in May 2020. “We believe the prosecutor’s action is aimed at putting economic pressure and financially hurting the family in a time of crisis and economic collapse due to the incompetence and inadequacy of the government and ruling establishments. We will not stay silent in the face of such inhuman actions,” Khandan wrote on Facebook.

On August 11, Sotoudeh went on hunger strike to demand the release of political prisoners amid the COVID-19 pandemic. In a letter from Tehran’s infamous Evin prison, she warned that inmates were being denied due process and access to legal representation.

On August 17, Intelligence Ministry and judiciary agents raided Sotoudeh’s house and arrested her 20-year-old daughter, Mehraveh Khandan, on charges of “insult and assault.” One of the family’s lawyers posted bail of 100 million tomans, about $23,729, to release her. Reza Khandan said the charges related to a verbal argument between his daughter and a female prison guard in 2019. “The message is very clear: Ms. Sotoudeh you must climb down and stop your hunger strike. They want to put pressure on her and intimidate the family.”