For Iran’s economy, 2015 was a year of high expectations and slow results. The historic nuclear deal in July – and the promise of sanctions relief – initially raised hopes among foreign companies eager to tap into the Middle East’s second largest economy (after Saudi Arabia). Iranians expected to quickly notice improvements in their quality of life. But by the end of 2015, tangible economic benefits had yet to materialize.
The Islamic Republic still faced significant challenges, triggered not only by sanctions, but by years of profligate spending and economic mismanagement. Iran was even slipping towards a recession. Domestic production stagnated. Low oil prices squeezed the state budget. And unemployment remained stubbornly above ten percent.

In October, President Hassan Rouhani approved a six-month stimulus package – a notable shift from his economic policies focused on improving fiscal discipline. He hoped to stimulate growth before the parliamentary elections and the implementation of the nuclear deal. But the move threatened to undermine his efforts to reduce inflation.
Rouhani faced pressure to deliver on the economic promises that Iranians – and a host of foreign companies – so eagerly anticipated. His administration may struggle to bridge the gap between economic expectations and reality, even after sanctions are lifted in 2016.
International Trade
Some U.N., E.U., and U.S. sanctions were due to be lifted or suspended on the nuclear deal’s Implementation Day, expected in early 2016. But foreign companies began flocking to Iran even before the deal was signed. In 2015, Tehran hosted a flurry of trade delegations and signed new contracts to boost cooperation in energy, transportation, and other sectors.
Around 60 foreign delegations visited Iran between March and November, according to deputy economy minister Mohammad Khazaei. At least a dozen were from Europe, many of which had been active in Iran before sanctions were tightened in 2010.
Barely six days after the deal was signed, German Economy Minister Sigmar Gabriel met with officials in Tehran to discuss expanding “lasting and stable economic cooperation.” A week later, French Foreign Minister Laurent Fabius visited Tehran for the same purpose. It was the first visit to Iran by a French foreign minister in 12 years. Italy, which used to be one of Iran’s major trade partners, sent a delegation of 300 businessmen in early August.

The deal may strengthen Iran’s economic ties with Europe, but it is unlikely to have the same impact for the United States. U.S. sanctions relief will generally be limited to nuclear-related restrictions on non-U.S. entities. American companies will still be prohibited from trading with Iran. Limited exceptions include civil aviation, carpets, pistachios, and caviar.
By the end of the year, Iranian officials had made it clear that the Islamic Republic did not intend to improve trade ties with the United States. On November 5, Minister of Industry, Trade, and Mines Mohammad Reza Nematzadeh said that Iran must “stop entry of American consumer goods and…prohibit products that symbolize the presence of the United States in the country.”
High Hopes and Disappointments
The prospect of sanctions relief fueled optimism among Iranians in 2015. In May, around 55 percent of Iranians expected to see tangible improvements in living standards within a year of the deal being signed, according to a poll from the Center for International and Security Studies at Maryland. By September, the figure had risen to 63 percent.

Iran’s crude oil exports will rise to a six-month high in December ahead of sanctions relief https://t.co/63aRP5YHAs pic.twitter.com/3tD2Fz9VjY

The hopes were not unfounded. In October, the International Monetary Fund predicted that Iran’s economy could grow 4.4 percent in 2016 if sanctions are lifted – an increase from its projection of 1.3 percent growth in April, before the deal was signed. Valiollah Afkhami-Rad, head of Iran’s Trade Development Organization, said on July 27 that exports and domestic production may rise at least 20 percent after sanctions are lifted. In November, Central Bank vice governor Gholamali Kamyab predicted that around $29 billion of Iran’s $100 billion frozen funds would be repatriated by early 2016. And Oil Minister Bijan Zanganeh announced that Iran would increase oil production from 2.9 billion barrels per day to 3.9 billion barrels per day by March 2016.
Paradoxically, the anticipation of better economic prospects had a negative impact on the economy in late 2015. First Vice President Es’haq Jahangiri blamed high expectations for oversupply and low demand in several industries. “Unfortunately, some people are expecting a sudden fall in prices after the implementation of the nuclear agreement,” he said on September 12. Economy Minister Ali Tayyebnia also linked high expectations to low domestic spending on cars and home appliances.
The auto industry – Iran’s largest non-oil sector – struggled in the months following the nuclear deal. Sales were low, as Iranians anticipated price decreases and imports of higher quality cars once sanctions are lifted. In August, a social media campaign in Iran began calling for a boycott of Iranian-made cars due to poor quality and safety standards. Minister of Trade, Mining, and Industry Mohammad Reza Nematzadeh called the boycott “sinful” and “anti-revolutionary,” arguing it would hurt the economy. Iran’s steel and cement industries also stagnated in 2015 from high supply and low demand.
Lifting sanctions will likely provide some relief for Iran’s ailing economy, but may not be a panacea. Low oil prices presented another economic challenge in 2015. In January, the government revised its draft budget to assume an oil price of $40 a barrel. The initial budget that President Rouhani presented to parliament was based on $72 a barrel, down from $100 in the 2014 budget. Iran’s oil and gas infrastructure also lagged far behind its Gulf neighbors. Once sanctions are lifted, Iran hopes to secure a staggering $185 billion in oil and gas investments by 2020. 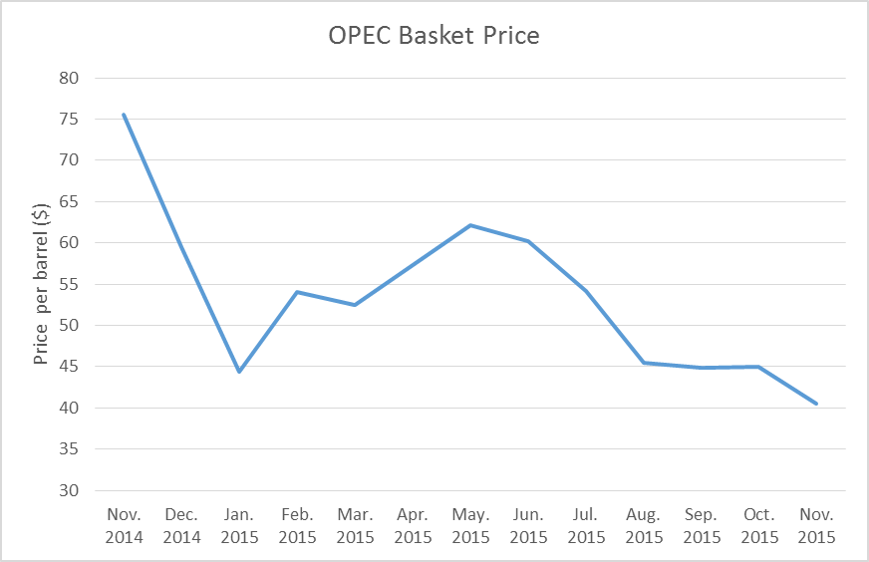 Source: OPEC
Rouhani’s Policies
Rouhani shifted gears to cope with economic pressures at the end of 2015. During his first two years in office, he had largely focused on improving fiscal discipline and modifying or reversing the populist policies of former President Mahmoud Ahmadinejad. Rouhani’s key achievement was reducing inflation to 14.8 percent by 2015, down from nearly 40 percent when he took office in August 2013.
For much of 2015, Rouhani stuck to similar policies. He tackled subsidy reform by raising gasoline prices twice and suspending monthly cash handouts to three million wealthy Iranians. All Iranians – regardless of income – had been eligible to receive the payments, but they have increasingly strained Iran’s state budget.

Reducing dependence on oil revenues became another key focus for his administration, especially as oil prices dropped. “We should have a variety of revenue sources, we cannot depend on a single source of income,” he said in January. On June 15, he announced that Iran’s 2015-2016 budget was “the least oil-dependent ever.”
By the end of the year, Rouhani faced new pressure to ward off a recession. In September, the ministers of economy, industry, labor, and defense sent Rouhani an open letter warning of economic decline. “If urgent action is not taken, stagnation could turn into crisis,” it said. The ministers blamed sanctions, low oil prices, and “uncoordinated decisions and policies.”
In October, Rouhani approved a six-month stimulus package, marking a significant change in policy. It was designed to inject cash into the economy and stimulate growth before sanctions are lifted. The timing of the policy shift suggests it may have been intended to help Rouhani score political points ahead of Iran’s elections for parliament and the Assembly of Experts. Some experts, however, warned that the move could increase inflation and jeopardize Iran’s economic recovery.
Low oil prices and structural problems may continue to stymie economic recovery in 2016. According to the World Bank, Iran still needs to improve its business environment, reduce the influence of state-owned enterprises, and reform its financial sector in order to see tangible benefits in growth and job creation.
Key Industries
Oil 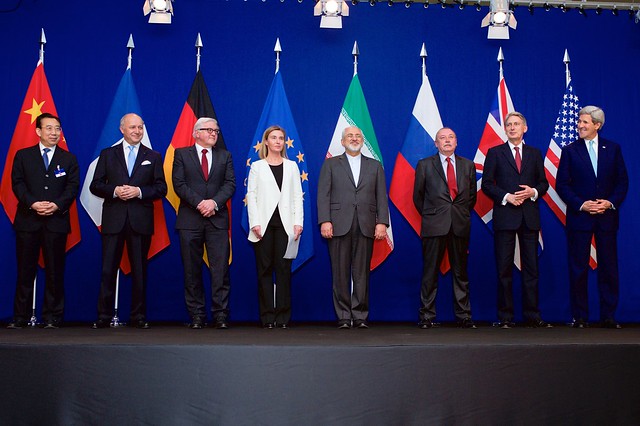 April 7: Rouhani and Turkish President Recep Tayyip Erdogan signed eight agreements to increase bilateral trade, aiming to increase trade volume to $30 billion by the end of 2015.
April 13: Russia began implementing an oil-for-goods deal with Iran. “In exchange for Iranian crude oil supplies, we are delivering certain products,” said Russian Deputy Foreign Minister Sergei Ryabkov. “This is not banned or limited under the current sanctions regime.”
April 13: France’s Total indicated that it would be interested in reviving oil and gas investments in Iran, if sanctions are lifted. “Iran has the world’s second largest gas reserves after Russia, and we will consider returning to this country once sanctions are lifted,” said Total CEO Patrick Pouyanne.
April 28: A Swiss business delegation met with Gholam Hossein Shafei, head of Iran's Chamber of Commerce. The two sides discussed expanding bilateral trade.
May 6: Iran and India signed a memorandum of understanding to develop the strategic Chabahar port in southeast Iran. Plans to develop the port date back to 2003, but were delayed by international sanctions on Iran.
May 10: Foreign Minister Mohammad Javad Zarif met with his South African counterpart, Maite Nkoana-Mashabane, in Tehran. Zarif described Iran’s relationship with South Africa as “friendly and strategic” and noted the potential for economic cooperation in the oil and gas industry.
July 14: Iran and the world’s six major powers reached a final nuclear deal.

September 8: Austrian firms signed contracts and memoranda of understanding with Iran totaling $89 million during Austrian President Heinz Fischer’s visit to Tehran. Fischer was the first European head of state to visit the Islamic Republic since 2004. Iran and Austria hope to increase bilateral trade from $300 million per year to $1 billion per year by 2020.
September 17: South Africa – formerly the leading African importer of Iranian oil – signed a deal to increase oil imports from Iran once sanctions are lifted.
September 21: France opened a trade office in Tehran during a visit from a business delegation with representatives from Airbus, Renault, Peugeot, and Total.
October 2: A British economic delegation, which included oil and gas companies, visited Iran.
October 12: The Japanese foreign minister met with Oil Minister Bijan Zanganeh in Tehran to discuss increasing oil imports once sanctions are lifted.
October 26: Brazilian Minister of Development, Industry, and Trade Armando Monteiro arrived in Tehran with a delegation to discuss improving economic ties with Iran. They hope to increase trade volume to $5 billion.
November: Two Italian companies proposed a four billion euro deal to participate in Iranian steel and aluminum projects.
November 2: Iran negotiated the potential for natural gas trade with Kuwait once sanctions are lifted. “Kuwaitis are looking to import natural gas from Iran,” according to managing director of National Iranian Gas Export Company Alireza Kameli.
November 18: A delegation representing 26 French oil companies discussed potential cooperation with officials in Tehran.
November 24: Russia and Iran signed seven memoranda of understanding on the sidelines of the Gas Exporting Countries Forum.
Cameron Glenn is a senior program assistant at the U.S. Institute of Peace.
Photo credits: U.S. Department of State