Iran’s hardliners have been mobilizing against a nuclear deal in the run-up to the mid-May negotiations between Iran and six major powers in Vienna. A conference entitled “We’re Worried” – advertised as “the great gathering of critics of a weak deal”—was held at the former U.S. Embassy in Tehran on May 3-4. Speakers vowed to retain Iran’s “nuclear rights” and warned the government of President Hassan Rouhani against giving too many concessions. They claimed that Iran’s negotiating team may sacrifice national interests to secure a final deal. 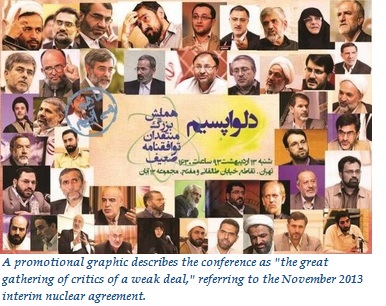 More than 100 lawmakers, students, academics and activists attended the event, which was reportedly organized by Basij paramilitary. Officials of former President Mahmoud Ahmadinejad’s administration attended. Attendees carried placards which vowed "Nuclear energy is our absolute right" and "Economic reform does not mean political capitulation." One sign pointed out that Rouhani is angry due to "mild criticism" of his foreign policy. Participants signed a petition demanding that the Islamic Republic’s right to uranium enrichment be “explicitly” recognized in a final deal and that all sanctions be lifted.
Fatemeh Alia, a conservative lawmaker, told state media that Iran is being duped. “The whole nation believes the main intention of the United States is to fully halt the Iranian nuclear program,” she claimed. Alia criticized Rouhani’s administration for not getting more sanctions lifted.
Farshi Jaafari, one of the organizers and a member of “The Justice-Seeking Student Movement,” told Fars News that the group wants to preserve Iran’s rights and “say that we won’t back down.”
Former head of Iran’s Atomic Energy Organization Fereydoon Abbasi-Davani chided Iran’s own negotiation team, led by Foreign Minister Mohammad Javad Zarif, for their willingness to compromise. “The Arak heavy water reactor must continue to operate as usual, and there is no need for any changes there . . . The negotiators should not have given concessions on this issue, because our team gave too many concessions to the other side,” Abbasi-Davani said. He praised Saeed Jalili, the previous negotiator and national security adviser under Ahmadinejad, for playing a “heroic role” in defending Iranian interests. During Jalili’s tenure, several rounds of talks from 2011 to 2013 failed to produce an agreement.
Abbasi-Davani also rebuked President Rouhani’s approach to solving the nuclear dispute. During his presidential campaign and after his inauguration, Rouhani argued that centrifuges should spin while citizens’ lives and the economy also spin. “It is a strategic mistake to tie the spinning of the centrifuges to people's lives,” Abbasi-Davani told the conference. “If you're after making people's lives work, don't act hastily.”
The conference communique included several demands:
•Clear recognition of Iran’s right to enrich uranium
•Continued development of peaceful nuclear activities
•Refusal of additional measures requested by the United Nations beyond the Nuclear Nonproliferation Treaty
•Imminent removal of financial and banking sanctions
•Release of Iran’s frozen properties
•Transparency on the negotiations and timelines
•Advance approval by parliament and the Supreme National Security Council of any deal with the U.N. nuclear watchdog
Several reformist newspapers dismissed the conference’s importance or described it as primarily a gathering of Ahmadinejad supporters. Conservative website Khabar Online published a list of the conference speakers, complete with their university degrees. Fatemeh Alia told journalists that government critics are “precious assets” and should not be labeled as “illiterates,” which may have been a reference Rouhani’s comment labeling his critics “semi-literate” in February. The conference speakers included two members of parliament—Ruhollah Hosseinian and Hamid Resaei—and a mid-ranking cleric in the supreme leader’s office — Alireza Panahina. Senior lawmaker Esmail Kowsari also attended.