Young Iranians are scaling walls, leaping staircases and flipping over benches. But they’re not running from the police. They’re practicing parkour, a blend of gymnastics, martial arts and plain old obstacle-course athletics. Participants are called traceurs, French for tracers. They have no equipment. They use nothing but their bodies. 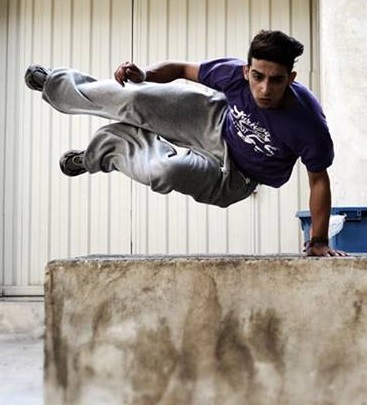 Parkour is attractive in Iran partly because it’s all about freedom and defying traditional limits. Some of Iran’s most daring traceurs are women. They too carve unorthodox paths through parks, allies and even rooftops.
Now practiced worldwide, parkour is not competitive; it lacks set rules. But mastering the organic discipline requires out-of-the-box thinking. Top traceurs can run full-speed at nearly any obstacle and figure out a way around or over it.
Iranian traceurs are gaining a reputation on the international circuit from their videos posted on Facebook and YouTube. Many Iranian teams—also called crews or clans—take inspiration from their Western counterparts. It’s one of several unconventional sports that are now creating a bridge across the otherwise deep international political divide.
The sport was imported from France, where a small group of young men developed the discipline in the 1980s. It was heavily influenced by military obstacle course training, but took on a faster and freer form. Thousands of young Iranians have taken on the challenging discipline since the early 2000s, after Iranian state television broadcast Yamakasi, a French film about parkour’s young founders. The craze is now popular even in remote Iranian villages.

Amirhossein Imani and his high school friends founded one of the first teams, Rahaa,  in 2003. They promoted parkour through a grassroots group called irPK. Imani visited London in 2004 to train under top parkour teams. Websites like parkour.ir, urbanfreeflow.ir and and forums began popping later that year. And the first parkour magazine was published in 2011.
By mid-2013, the go-to website Parkour Iran listed nearly 50 rival teams and clans in its directory. Some have their own websites, Facebook pages and YouTube channels. Some include young women, who have taken to free parkour because the government has not adequately invested in women’s athletics.
“It’s all about speed – unlike the lives of young Iranian women, which sometimes feel like they’re frozen,” a young female traceur told France 24 in mid-2013.
Female athletes have added obstacles of cumbersome Islamic dress as well as keeping an eye out for authorities. “We fear getting in trouble with the police or basijis [volunteer militiamen], who could accuse us of copying a Western fad,” a 20-year-old university student told France 24. “We could also get in trouble for practicing sports outside designated facilities.”
One of most noted female teams is Street Bax in Lahijan, a resort town on the Caspian Sea. Their video of girls parkour-ing across trees, walls, sand-dunes and staircases had more than 42,000 hits on Youtube.
Iran’s Ministry of Youth and Sports has occasionally permitted parkour exhibitions as part of breakdance competitions. Some teams have also held independent competitions. Team Rahaa has built indoor parkour courses for several indoor jams.
Iranian youth have also taken to freerunning, a parkour off-shoot with added flare. Freerunners do flips, spins and dance moves in between obstacles. Sebastien Foucan, one of parkour’s French originators, started the craze. Iranians are now signing up to compete in international competitions.
Mohammad Rasouli from Tehran submitted the following video to qualify for Red Bull’s 2013 Art of Motion competition. The event, scheduled for September, will bring freerunners from all over the world to Santorini, Greece.

Click here for Youth in Iran Part 1: "The Determinators"