On September 22, the United States sanctioned Iran’s Morality Police and seven senior security officials for the death of Mahsa Amini and violence against protestors. The 22-year-old woman was detained by Morality Police in Tehran on September 13 for an “improper” hijab, or head covering. She was allegedly beaten and then died in custody three days later. Her death sparked protests in more than a dozen cities, leading to several deaths amid clashes with security forces.

The Iranian government “needs to end its systemic persecution of women and allow peaceful protest,” Secretary of State Antony Blinken said in a statement. “The United States will continue to voice our support for human rights in Iran and hold those who violate them to account.”

The Treasury named the following individuals:

The seven officials and the Morality Police were sanctioned under Executive Order 13553 issued by President Barack Obama in 2010. It imposes sanctions on individuals and entities with respect to serious human rights abuses by the Iranian government. The following are statements from the State and Treasury Departments on the new sanctions.

The United States condemns the tragic and brutal death of Mahsa Amini, a 22-year-old Iranian woman who died in the custody of the Iranian Morality Police after being detained for purportedly wearing a hijab too loosely. We mourn with her loved ones and with the Iranian people. 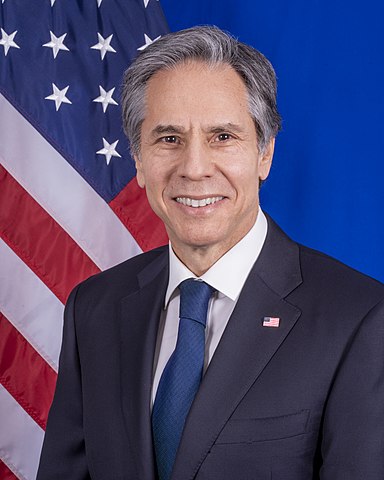 In response to this and other human rights violations in Iran—including the violent suppression of peaceful protests—the United States is imposing sanctions on Iran’s Morality Police and senior security officials who have engaged in serious human rights abuses, pursuant to Executive Order 13553. The Morality Police, an element of Iran’s Law Enforcement Forces (LEF), arrests women for wearing “inappropriate” hijab and enforces other restrictions on freedom of expression. The Treasury Department’s Office of Foreign Assets Control (OFAC) is further designating Haj Ahmad Mirzaei and Mohammad Rostami Cheshmeh Gachi, both of whom are senior officials in the Morality Police.

The Iranian government needs to end its systemic persecution of women and allow peaceful protest. The United States will continue to voice our support for human rights in Iran and hold those who violate them to account.

Today, the U.S. Department of the Treasury’s Office of Foreign Assets Control (OFAC) is designating Iran’s Morality Police for abuse and violence against Iranian women and the violation of the rights of peaceful Iranian protestors. The Morality Police are responsible for the recent death of 22-year-old Mahsa Amini, who was arrested and detained for allegedly wearing a hijab improperly.

“Mahsa Amini was a courageous woman whose death in Morality Police custody was yet another act of brutality by the Iranian regime’s security forces against its own people,” said Secretary of the Treasury Janet L. Yellen. “We condemn this unconscionable act in the strongest terms and call on the Iranian government to end its violence against women and its ongoing violent crackdown on free expression and assembly. Today’s action to sanction Iran’s Morality Police and senior Iranian security officials responsible for this oppression demonstrates the Biden - Harris Administration’s clear commitment to stand up for human rights, and the rights of women, in Iran and globally.”

Today’s actions are taken pursuant to Executive Order (E.O.) 13553, which imposes sanctions on certain persons with respect to serious human rights abuses by the Government of Iran.

Iran’s Morality Police is the component of Iran’s Law Enforcement Forces (LEF) tasked with enforcing the country’s laws against immodesty and societal vices. The LEF, the Iranian government’s main security apparatus dedicated to crowd control and protest suppression, played a key role in the crackdown on protesters in the aftermath of the disputed Iranian presidential election in 2009 and has been called upon to respond to multiple nationwide protests since then, including the November 2019 protests over gasoline price increases during which Iranian security forces killed at least hundreds of Iranian protestors. Treasury designated the LEF pursuant to E.O. 13553 on June 9, 2011, for its role in the 2009 post-election crackdown.

On September 14, 2022, the LEF’s Morality Police arrested 22-year-old Mahsa Amini for purportedly wearing a hijab improperly and sent her to an “educational and orientation” class at police headquarters. She was transferred to a hospital that same day in a coma and died two days later from internal injuries. Eyewitnesses claim that Amini died due to injuries sustained while in Morality Police custody. Mahsa’s father told the press that authorities covered bruises on her body in the hospital and refused to let the family see them. LEF authorities have blamed her death on a heart ailment, but her family said she had no such condition. Iran’s Morality Police are being designated pursuant to E.O. 13553 for having acted or purported to act for or on behalf of, directly or indirectly, Iran’s LEF.

Mohammad Rostami Cheshmeh Gachi serves as the head of Iran’s Morality Police, which has demonstrated a culture of violence and excessive force under his command. In early 2022, Rostami declared that the Morality Police would punish Iranian women who refuse to wear a hijab. Haj Ahmad Mirzaei served as the head of the Tehran division of Iran’s Morality Police during Amini’s unjust detention and untimely death. Rostami and Mirzaei are being designated pursuant to E.O. 13553 for having acted or purported to act for or on behalf of, directly or indirectly, Iran’s LEF.

Esmail Khatib is Iran’s Minister of Intelligence and head of the MOIS, one of the Iranian government’s main security services which is responsible for serious human rights abuses. Under his leadership, the MOIS has cracked down on a large number of human rights defenders, women-rights activists, journalists, filmmakers, and members of religious minority groups. MOIS has also aggressively persecuted individuals reporting on human rights abuses and violations in Iran, as well as their families, and subjected detainees to torture in secret detention centers during his tenure.

Salar Abnoush is the deputy commander of the Basij and has publicly described his command-and-control role over Basij forces during the November 2019 protests. The Basij have been linked to the killing of unarmed protestors on numerous occasions.

Qasem Rezaei was appointed the LEF deputy commander in May 2020. As a senior LEF official, Rezaei is responsible for serious human rights violations committed by the LEF under his command. Rezaei has also directly overseen violence against detainees, including torture and beatings. He has justified the LEF’s actions following the deadly use of force against Iranian protestors and called for continued violence against protestors in May 2022. As a former border commander of the LEF, Rezaei oversaw the harsh treatment of persons on Iran’s border, including the use of direct fire against persons on Iran’s borders.

Manouchehr Amanollahi is the LEF commander of Iran’s Chaharmahal and Bakhtiari province. During his tenure, the LEF suppressed 2021 protests in the province in response to a lack of water, and 2022 protests in response to food rationing. LEF units under Amanollahi’s command used live rounds against protestors when suppressing the protests, resulting in multiple deaths. As an advisor to LEF leadership, Amanollahi was also involved in the LEF’s response to nationwide protests in November 2019, which resulted in the deaths of hundreds of protestors.

Kiyumars Heidari is the commander of the Iranian Army’s Ground Forces. He has publicly admitted to his and his force’s involvement in the violent response to the November 2019 protests that led to the death of at least hundreds of protesters.

Abnoush, Rezaei, Amanollahi, and Heidari are all being designated pursuant to E.O. 13553 for being persons acting on behalf of the Government of Iran (including members of paramilitary organizations) who are responsible for or complicit in, or responsible for ordering, controlling, or otherwise directing, the commission of serious human rights abuses against persons in Iran or Iranian citizens or residents, or the family members of the foregoing, on or after June 12, 2009, regardless of whether such abuses occurred in Iran.

In addition, persons that engage in certain transactions with the individuals or entities designated today may themselves be exposed to designation. Furthermore, any foreign financial institution that knowingly facilitates a significant transaction or provides significant financial services for any of the individuals or entities designated today could be subject to U.S. correspondent or payable-through account sanctions.

The power and integrity of OFAC sanctions derive not only from its ability to designate and add persons to the Specially Designated Nationals and Blocked Persons List (SDN List), but also from its willingness to remove persons from the SDN List consistent with the law. The ultimate goal of sanctions is not to punish, but to bring about a positive change in behavior. For information concerning the process for seeking removal from an OFAC list, including the SDN List, please refer to OFAC’s Frequently Asked Question 897.

Identifying information on the individuals and entities designated today.