In a lengthy speech on November 19, Supreme Leader Ayatollah Ali Khamenei downplayed the nationwide protests and claimed that “orchestrators” of the “riots” had failed to mobilize many Iranians. “Those who have come out and those who are behind the scenes are far too small to be able to harm the system,” Khamenei told hundreds of people from Isfahan visiting Tehran. “Without a doubt, this villainous behavior will be dealt with and stopped.” The demonstrations, which spread to all 31 provinces after the death of Mahsa Amini on September 16, represented the greatest challenge to the regime in more than a decade. 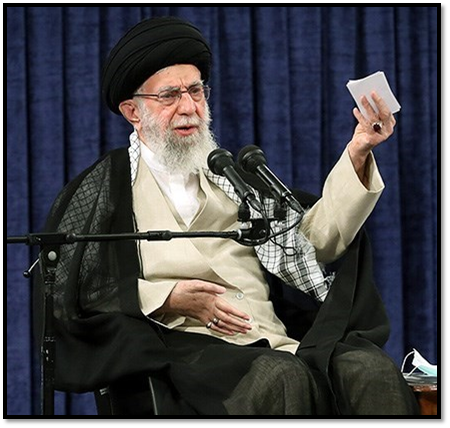 Khamenei called on the judiciary to “punish the perpetrators” but in accordance with the law. “No one has the right to arbitrarily punish someone at their own will.” He distinguished between the various roles people played in the unrest. “Some are the orchestrators, some are people who have been deceived, some are those who have been paid money, and others are those who have committed crimes,” Khamenei said. “These people are not all the same. The person who has only been deceived but has not committed any crimes should be given a warning and admonished.”

Khamenei accused “the enemy” – a vague term often used to describe the United States, Israel or other adversaries – of instigating protests and “inducing despair” among Iranians. “The enemy is using a wide range of tools, such as the media; satellite stations; the bizarre world of cyberspace; and mercenary, hired television stations. It is using all of these to kill hope in people.”

The Supreme Leader acknowledged that Iran faced challenges, especially on the economy. “After all, the sanctions have an impact,” he noted. Khamenei, however, cited a raft of new scientific, medical, defense and infrastructure projects to show that Iran’s “society is not stagnant.”

He also warned that the enemy might try to turn certain demographics against the government. “It might target ethnic groups. It might target workers. It might target women,” he said. Women were already key driving force in the protests. And some of the most intense clashes between demonstrators and security forces occurred in areas inhabited by the Kurdish, Azeri and Baluch ethnic minorities. The following are excerpts from his address on the protests.

“The main orchestrators of the riots are working behind the scenes and apart from these people who take to the streets. Those who are orchestrating this from behind the scenes wanted to bring the people out. Now that they have failed, they are trying to exhaust the officials and organizations with their villainous acts. They are making a mistake. Such villainy only causes people to become fed up with them. It makes the people despise and hate them even more. Now that the people loathe these evildoers, the continuation of these acts increases the people’s hatred toward them.

📹 Those orchestrating riots are resorting to villainous acts to exhaust country's officials pic.twitter.com/tQZTyImQHr

“Now, the first thing is that yes, events like these do create problems for people. You need to close your shop if it is on the street. You need to look after your car. What can you do? They create problems and they commit crimes. They destroy things. But those who have come out and those who are behind the scenes are far too small to be able to harm the system. Without a doubt, this villainous behavior will be dealt with and stopped. Then the Iranian nation will enter the field with more strength and a fresher spirit, and they will continue to make even more progress. This is the nature of how it works. This is the nature of a nation that has faith. Yes, certain things might come up for them, but they create opportunities for themselves from the events that might have been threats. They create opportunities from threats. That is how it has been up until now. That is how it has been since the beginning of Islam.”

“The next point is about how the orchestrators of the riots should be dealt with. Some [of those who participated in the riots] are the orchestrators, some are people who have been deceived, some are those who have been paid money, and others are those who have committed crimes. These people are not all the same. The person who has only been deceived but has not committed any crimes should be given a warning and admonished. They need to be guided. It does not matter whether they are a student or not a student, whether they are on the streets or in the university, you need to ask them, “Is this action you are taking helping or hindering Iran’s progress?” Let them think about it. These people have been deceived. You need to encourage them to think. Those who go along with the enemy without realizing what the enemy is pursuing, need to be awakened. You need to tell them, “The enemy is there. Be careful not to join forces with the enemy.” In the words of Imam Khomeini (ra), “Shout whatever you want at America.” So, this is with regard to the youth who have been deceived.

“As for the perpetrators of crimes, murder, vandalism, or threats – they threaten shopkeepers, telling them to close their shops or they will set fire to them; they threaten drivers, telling them if they don’t honk their horns or do this or that, they will damage their car; and they threaten others – these perpetrators need to be punished. They need to be punished according to their offenses. Murderers should be dealt with in one way, vandals should be dealt with in another way, and those who instigate others to do these things using propaganda need to be dealt with differently. Each one of these elements needs to be punished according to the crimes they have committed. Although, I must add here that these punishments need to be carried out by the Judiciary. No one has the right to arbitrarily punish someone at their own will. No, there is a strong Judiciary, which by the grace of God is alive, alert, and motivated. They need to punish the perpetrators.

“A surgeon cuts the wound open and puts a dressing on it. Both need to be done. This is another point.

“Another point is that up until this moment, the enemy has been defeated, praise God. The enemy’s intention was to bring people out onto the field, [but] the people demonstrated that they are not with the enemy. Of course, the enemy creates media campaigns – pseudo-campaigns and mass, false propaganda. As you can see in the various media outlets, the enemy portrays things in a way that causes one who is unaware to believe that there actually is something happening. But this is not the reality of the situation. That which is widespread, that which is magnificent, is the presence of the people serving the Revolution and in the fields of the Revolution. Yes, this is truly remarkable. But not the other [the enemy’s] side. They wanted to provoke people, [but] the people responded strongly to them. Although let me add here that the enemy has a new trick up its sleeve every day. If it fails here, it is not clear that it will give up. It will go after something else. It might target ethnic groups. It might target workers. It might target women. Of course, our honorable women and workers are too dignified to surrender to the enemy and be deceived by them. There is no doubt about that.”