“The proposed sale of this equipment and support will not alter the basic military balance in the region,” the State Department said in statements on each sale. The defensive weapons were intended to bolster defenses against rocket, missile and drone attacks, primarily from the Houthi rebels in Yemen. Iran has reportedly supplied the Houthis with advanced weaponry.

Saudi Arabia and the UAE have long been concerned about Iran’s arsenals of ballistic missiles and drones. But Saudi Arabia has outpaced Iran in annual military spending since the early 1990s, according to data collected by the Stockholm International Peace Research Institute (SIPRI). In 2020, Saudi Arabia spent some $57.5 billion on its military, the sixth highest expenditure in the world. The kingdom has historically purchased advanced U.S. and British military goods. In contrast, Iran spent $15.8 billion in 2020. Tehran has had to develop its own military industrial complex while relying on Chinese and Russian goods. 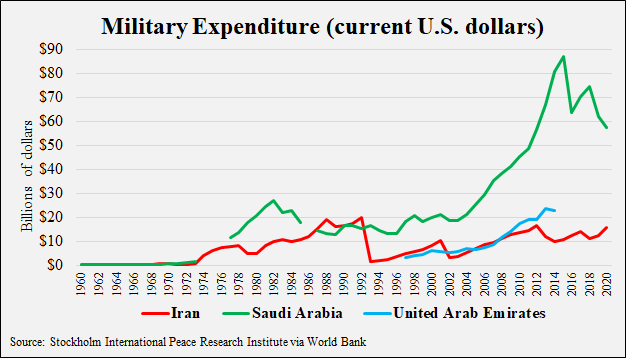 Concurrently, U.S. Central Command announced the start of planning for an annual military exercise with GCC countries, “Eagle Resolve,” scheduled for May-June 2023 in Saudi Arabia. “The overarching objective is to protect populations and infrastructures,” Air Force Maj. Gen. Steven J. deMilliano said. “This exercise is designed to enhance regional, civil, and military interoperability along with process development, honing the skills necessary to implement crisis management and defend the skies from inbound threats.”

The moves came after Biden visited Saudi Arabia on July 15-16. In Jeddah, Biden met with senior leaders from nine countries, including the six members of the Gulf Cooperation Council as well as Egypt, Jordan and Iraq. They committed to bolstering cooperation to deter and defend against Iran and its proxies. The following are excerpted statements from the State Department and U.S. Central Command on the arms sales and exercise.

The State Department has made a determination approving a possible Foreign Military Sale to the Kingdom of Saudi Arabia of PATRIOT MIM-104E Guidance Enhanced Missile-Tactical Ballistic Missiles (GEM-T) and related equipment for an estimated cost of $3.05 billion. The Defense Security Cooperation Agency delivered the required certification notifying Congress of this possible sale today.

This proposed sale will support the foreign policy goals and national security objectives of the United States by improving the security of a partner country that is a force for political stability and economic progress in the Gulf region.

The State Department has made a determination approving a possible Foreign Military Sale to the Government of the United Arab Emirates of Terminal High Altitude Area Defense (THAAD) System Missiles, THAAD Fire Control and Communication Stations, and related equipment for an estimated cost of $2.245 billion.  The Defense Security Cooperation Agency delivered the required certification notifying Congress of this possible sale today.

U.S. Central Command, along with The Kingdom of Saudi Arabia, initiated the Concept Development Conference for the planning of Exercise EAGLE RESOLVE 23 - a scenario-driven command post exercise (CPX) linked with field training exercises (FTX) scheduled for May-June 2023 in Saudi Arabia.

The annual exercise, in its 16th iteration, is designed to develop and employ a Combined Joint Task Force capable of responding to the complexity of the current and emerging regional threats in the United States Central Command area of responsibility.

"The overarching objective is to protect populations and infrastructures,"

The exercise, which first occurred in 1999, consists of scenarios such as air defense concepts, counter unmanned aircraft systems, border security operations, inter-ministerial coordination and procedures to address consequence management objectives. The concept development conference establishes groundwork that the planning teams will continue to build upon as they move forward toward the exercise's execution.