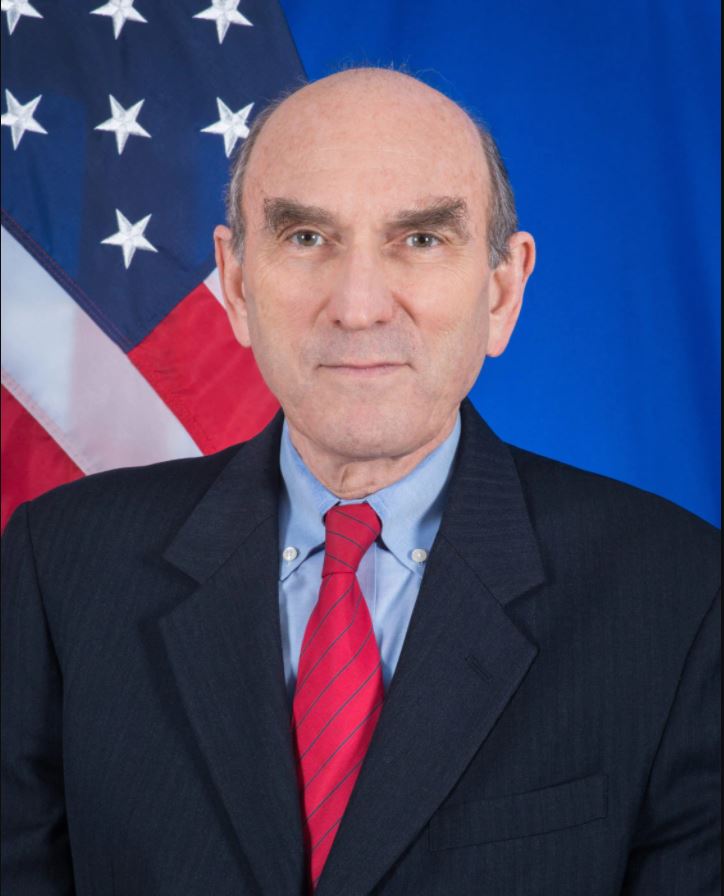 On September 24, U.S. Special Representative for Iran Elliott Abrams said that any future agreement with Tehran would have to cover four areas — nuclear and missile programs, support for terrorism and American detainees — and be "legally binding." "The United States is open to negotiate with Iran and meet without preconditions," Abrams told the Senate Foreign Relations Committee. "The regime need only meet our diplomacy with diplomacy, not with violence, bloodshed and attempted extortions."

The hearing was Abrams's first public testimony before Congress since becoming the U.S. Special Representative for Iran in August. He replaced Brian Hook. The following are Abrams's opening remarks submitted for the record to the Senate Foreign Relations Committee.

This administration harbors no illusions about the Islamic Republic of Iran. It is the principal driver of instability and violence in the Middle East, and it remains the world’s leading state sponsor of terrorism and anti-Semitism. It remains in power through brutal repression of the Iranian people.

We have approached the threats from Iran with a strategy that has two primary objectives. First, to deprive the Iranian regime of the money it needs to support its destabilizing activities. Second, to bring Iran to the negotiating table to conclude a comprehensive deal, as outlined by Secretary Pompeo in May 2018.

The legally binding agreement we seek with the Iranian regime must address four key areas: its nuclear program, its ballistic missile development and proliferation, its support to terror groups and proxies, and its wrongful detention of U.S. citizens, including Siamak and Baquer Namazi, and Morad Tahbaz. The United States is also calling on the Iranian regime to provide a full accounting of the fate of retired FBI agent Robert Levinson, who went missing in Iran in 2007. The United States is open to negotiate with Iran and meet without preconditions. The regime need only meet our diplomacy with diplomacy, not with violence, bloodshed, and attempted extortions.

Our efforts to disrupt the regime’s ability to carry out its malicious agenda have met with real success. By any measure, the Iranian regime is weaker today than when President Trump took office. The regime faces unprecedented and worsening economic and political crises that are exacerbated by the poor choices the regime makes in an effort to advance its radical ideology.

In response to the Islamic Republic’s choice to pursue hostility and aggressive acts, this administration has implemented the unprecedented Maximum Pressure Campaign. We have imposed the toughest sanctions ever against the corrupt leadership of the regime. Our sanctions are having a significant impact on the regime’s ability to fund its malign activities and keep a stranglehold on the Iranian people.

According to the IMF, Iran's economy contracted by 5.5 percent in 2018 and 7.6 percent in 2019; the IMF expects it to shrink by another 6 percent in 2020. Iran’s budget deficit for 2020 is a staggering and unsustainable 26 percent of GDP, while its budget is based off an unrealistic oil exports projection of 1 million barrels per day at $50 per barrel. Our sanctions have denied Iran more than 90 percent of its oil export revenue, depriving the regime access to well over $70 billion in income that could have otherwise gone to fund terror operations. Going forward, our oil and petrochemical sanctions will continue to deprive the regime of as much as $50 billion annually. As a result, Iran is struggling to access foreign currency. You can see the impact of all this pressure by looking at the Iranian Rial, which has fallen in value on the open market from about 60,000 to the dollar in 2018 to about 270,000 to the dollar today.

The consequence of this economic pressure is a change in Iran’s malign behavior, willing or not. Multiple Iranian state propaganda television channels have had to shut down in 2020 and others are on the verge of closure because they can no longer afford to pay the satellite providers. And that is because the government is running out of foreign currencies. Iranian proxies and partners in Syria and elsewhere are going unpaid, and the services they once relied upon are drying up. Iran-supported militants can no longer rely on steady and consistent Iranian support. [Hezbollah] and Hamas are under “austerity plans” to deal with a lack of funds from Iran. As a result, we believe the lives of innumerable Iranians, Syrians, Iraqis, Yemenis, and other innocent civilians in the regime’s crosshairs have been saved.

The United States has not stood by idly in the face of Iran’s malign activities. Working with our partners and allies, we have redoubled our commitment to preserving peace and stability in the region. We have shown Iran that if it chooses to threaten American lives, President Trump will not hesitate to take decisive action. Iran understands strength and the credible threat of military force.

We can observe the same successes of deterrence at sea. In 2015 and 2016, during the time that the conclusion and implementation of the JCPOA was to have allegedly moderated Iran’s behavior, the U.S. Navy recorded 58 incidents of unsafe and unprofessional naval conduct by Iran, including the illegal detention of U.S. sailors. From the earliest days of this administration, the United States made clear we would not tolerate Iranian naval harassment, leading to a sharp decline in Iran’s provocative maritime behavior.

In addition to our economic pressure and military deterrence, we have rallied the world to treat the regime as the pariah its actions have demonstrated it to be.

We have called on nations to sanction or ban Iran’s terrorist proxy, [Hezbollah] as a terrorist organization, in its entirety. Since the beginning of 2019, nations such as Germany, the United Kingdom, Argentina, as well as many others, have taken far-reaching actions against [Hezbollah]. We warned the world of Mahan Air, Iran’s airline that ferries terrorist personnel, arms, and assets around the world. Germany, France, and Italy have joined many other nations in banning Mahan Air flights from landing at or taking off from their airports.

Following the re-imposition of U.S. sanctions in 2018, SWIFT de-listed 33 Iranian banks. We continued to urge the international community to hold Iran accountable for its illicit financial activities, and in February 2020, the Paris-based Financial Action Task Force (FATF) reimposed full countermeasures on Iran for its failure to adhere to basic standards. Iran joined North Korea in ignominy as the only countries on FATF’s “blacklist”. This powerful decision is isolating the regime’s financial and banking sector.

Most visibly, we are further isolating Iran by brokering the peace agreement between Israel and the UAE, and the Israel-Bahrain Declaration as part of the historic Abraham Accords. We are hopeful more nations will follow their courageous acts and embrace the opportunity of peace. There is a reason that these accords were orchestrated by the United States and signed in Washington. Nations in the Middle East have renewed confidence in the United States because we are standing up to Iran.

This administration will never hesitate to protect our national security and prevent Iran from endangering the world. Unfortunately, in August, the UN Security Council failed to uphold its stated mission to maintain international peace and security and did not extend the UN arms embargo on Iran, which has been in place in various forms for 13 years. The Security Council’s inaction would have paved the way for Iran to buy a wide array of conventional weapons on October 18. We have been clear that we would not permit this to happen. In accordance with our rights under UN Security Council resolution 2231, and in light of Iran’s continued and significant non-performance of its JCPOA commitments, we initiated the snapback process to restore virtually all previously terminated UN sanctions on Iran, which includes removing the sunset provision on the arms embargo. These sanctions returned this past Saturday, September 19. Further, on September 21, this administration took action to strengthen our domestic sanctions authorities to counter Iranian conventional arms activity.

Because of the failures of the JCPOA, Iran is nearly five years closer to the expiration of restrictions on Iran’s uranium enrichment program and reprocessing-related activities, bringing it unacceptably close to a dangerous nuclear breakout capability. However, thanks to the snapback of UN sanctions, Iran is now obligated to suspend enrichment, reprocessing, and heavy-water related activities. The United States expects all UN Member States to fully comply with their obligations regarding re-imposed restrictions on Iran, as the UN Charter requires all Member States to do.

The United States will never let the world’s leading state sponsor of terror obtain the world’s most deadly weapon. Iran would be wise not to repeat and expand its tactic of nuclear and military extortion to extract concessions. The regime’s malign actions only steel our resolve and increase the regime’s economic and diplomatic isolation. Instead, Iran should cease its violence and come to the negotiating table.

If Iran is willing to put the needs and desires of its people ahead of its dangerous ideological ambitions, it has much to gain from negotiations. The people of the United States and Iran should have diplomatic ties again. Our embassies could be reopened so that the brightest minds of our countries could work together and solve the problems for our two peoples. We can end all sanctions, and instead work on trade deals and direct flights to Houston, New York, and Los Angeles. We are willing to reestablish diplomatic relations, help bring economic prosperity, and more if Iran is ready to behave like a country rather than a cause.

Our negotiations with Iran have already shown dividends and are a model of how the United States ought to approach the regime. By starting from a principled position of strength, we have brought two Americans, Xiyue Wang and Michael White, back to the United States from Iranian detention. And there was no payment for the Americans, no sanctions relief granted, and no pallets of cash loaded on planes to the Iranian regime in exchange for their release.

We are delighted that Xiyue Wang and Michael White are reunited with their families, and we are committed to bringing every American home who is wrongfully detained abroad. Our team works every single day – literally every single day – to make that happen.

That Americans can end up in Iran’s jails to be used as political pawns is just one demonstration of the regime’s daily mockery of justice that Iranians know all too well. Just recently, the regime brutally tortured and shamefully executed champion wrestler Navid Afkari to send to its own people an unmistakable message of intimidation that protests will not be tolerated. The greatest victims of the Islamic Republic of Iran are the Iranian people, and they too are increasingly standing up to the regime.

In response to widespread protests in November 2019 the regime executed a brutal crackdown, killing as many as 1,500 of its own citizens while jailing thousands more. In an attempt to hide its actions from the world, the regime simultaneously imposed a near-total shutdown of access to the internet.

Every year, the regime loses the support of more and more Iranians. This year’s legislative elections saw the lowest turnout of voters in the regime’s history. Most Iranians boycotted the election, in which candidates were pre-approved by Supreme Leader Khamenei’s cronies and clerics. The Iranian people are suffering under a corrupt and radical regime whose leaders care more about filling their own pockets and sending weapons and cash abroad than providing for their people.

As President Trump has said, Iran is a country with enormous untapped potential. If Iran were to work alongside its neighbors to foster stability and welcome peace rather than drive conflict, the Iranian people would thrive and once again enjoy prosperity. I look forward, as you do, to the day that all Iranians enjoy the freedom and dignity they so deeply deserve.