On May 28, Iran’s new parliament elected Mohammad Baqer Qalibaf, a political hardliner and a former Revolutionary Guard, as its new speaker. The former mayor of Tehran, who also ran for the presidency three times, received 230 votes from the 264 lawmakers who attended the session. Qalibaf vowed to improve the livelihood of the poor, create jobs, raise the value of the national currency and decrease Iran's dependence on oil.

Fereydoon Abbasi, who headed the Atomic Energy Organization of Iran from 2011 to 2013, received 17 votes. Mostafa Mir Salim, a former culture minister who finished third in the 2017 presidential elections, received 12 votes. (Roughly a dozen seats still have to be decided in a run-off election, which is currently scheduled for 2021, after being deferred twice due to the COVID-19 pandemic). 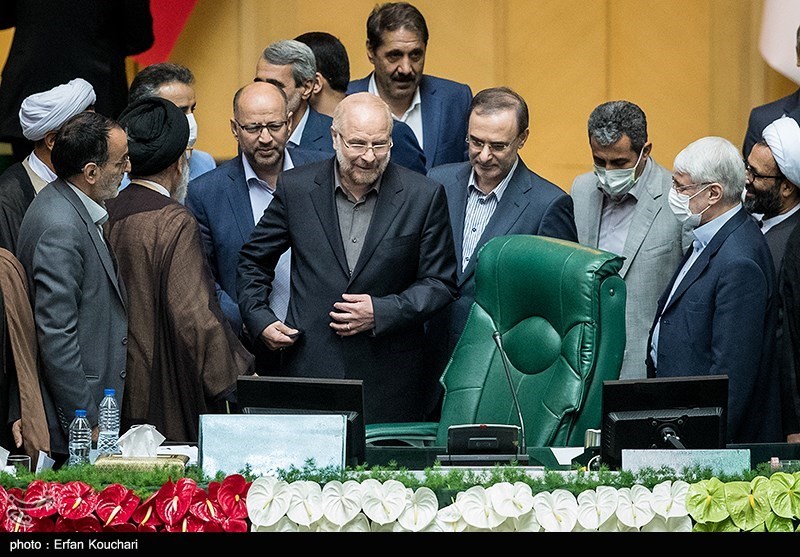 Qalibaf, surrounded by other parliament members, took the speaker's seat after the election

Qalibaf’s election reflected the shifting balance of power in Tehran since the parliamentary election in February. It may also foreshadow the political environment in the runup to the presidential election in the spring of 2021. Veterans of the Revolutionary Guards have played an increasingly important roles in politics as well as in the economy and the military. Centrists and reformers who backed President Hassan Rouhani have been increasingly sidelined. In the new parliament, reformists or centrists won only 19 out of the 290 seats in parliament—down from the 121 seats they won in 2016. Conservative and hardline factions won 221 seats in 2020—up from 83 seats won in 2016.

Qalibaf replaced Ali Larijani, who had served as speaker since 2008 but opted not to run in the February 2020 elections. Larijani was a conservative, but he had a working relationship with Rouhani. He shielded the president from hardline critics during the negotiations for the 2015 nuclear deal between Iran and six major world powers. Qalibaf, however, has long been a fierce critic of Rouhani. Qalibaf lost twice to Rouhani in the 2013 and 2017 presidential elections.

As speaker, Qalibaf will automatically become a member of the Supreme National Security Council (SNSC), which is the most important body in shaping national security in the Islamic Republic. All SNSC decisions must ultimately be confirmed by the Supreme Leader, Ayatollah Ali Khamenei, but the body’s deliberations shape the policy recommendations on domestic and national security that go to his office.

Born in 1961 to a dried-fruit seller, Qalibaf joined the Revolutionary Guards during the 1979 revolution. He quickly moved up the ranks during and after the Iran-Iraq war, playing a large role in recapturing the city of Khorramshahr in 1982. Trained as a pilot, he was commander of the Revolutionary Guards Air Force from 1996 to 1999. He was national police chief from 2000 to 2005. During that time, he reportedly received a doctorate in political geography.

Qalibaf ran for president in 2005 but lost to Mahmoud Ahmadinejad. He was elected mayor of Tehran by the city council later that year; he held the position until 2017. In 2013, Qalibaf ran again for president. During the campaign, opposition media released a two-hour audio recording of Qalibaf meeting with students in the Basij, a paramilitary wing of the Revolutionary Guards. He boasted about playing a prominent role in the brutal crackdown of student protests in 1999.  “I was among those carrying out beatings on the street level, and I am proud of that,” he said. “I didn’t care that I was a high-ranking commander.”

Qalibaf was defeatedly decisively by Hassan Rouhani but Qalibaf earned more votes than any other conservative candidate. In 2016, Qalibaf’s reputation was questioned by an investigation into alleged corruption among city officials. He also faced criticism in January 2017 when the Plasco building, one of Tehran’s oldest high-rises, was set ablaze and eventually collapsed. Dozens of fire-fighters died. Many Iranians accused the mayor of mismanagement and called for his resignation.

In April 2017, Qalibaf initially said he would not run for president but then registered at the last minute. During the campaign, Qalibaf had several heated exchanges with Rouhani and challenged the president’s economic record. “You are the government of the four percent,” Qalibaf told Rouhani, accusing him of working to benefit Iran's elite.  Qalibaf eventually dropped out of the race and endorsed hardliner Ebrahim Raisi, who went on to lose to Rouhani in a landslide defeat. 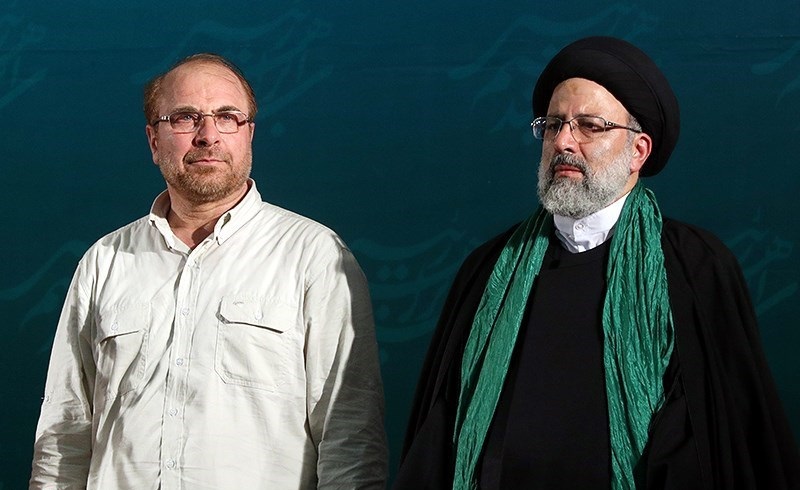 Qalibaf endorsed Raisi during a campaign rally in 2017

In the February 2019 parliamentary elections, Qalibaf headed the list of 30 candidates from the Coalition Council of the Islamic Revolution Forces for Tehran. He finished first in Tehran, winning more than 1.2 million votes, the most of any candidate in the capital. He became a strong contender for speaker.

Ghalibaf who is seeking to be speaker of future parliament in #Iran has published a new video saying new parliament will work hard to rid people from US pressure. By highlighting “strong & popular economy”, he said his slogan for the fight against #US is “work, work & work”. pic.twitter.com/4oSc0vBvlF

Qalibaf on the Issues:

Coronavirus will not be controlled through “optimism and delays…Though the time has been missed, we ‘only’ have one option to prevent further threat to people’s health: strict quarantine and enforcing widespread and provisional limitations.”

On the 1999 Student Protests

“During the incidents of July 9, 1999, at Tehran University and its dormitory… I was with Mr. [Qassem] Soleimani. We stood firm. Many people criticized us. Even now, wherever we go, they still criticize us. When [people in the uprising] approached the leader’s office, I was the commander of the Air Force. My photo exists on a 1,000-cc motorbike with a club in my hand … This Qalibaf was the commander of security forces in the incidents of July 9, 1999.”

“Our strategy in confronting the terrorist America is to finish the revenge for martyr Soleimani's blood… [This will entail] the total expulsion of America’s terrorist army from the region.”

“[The newly formed parliament] considers negotiations with and appeasement of America, as the axis of global arrogance, to be futile and harmful.”

“The new parliament regards the fight against the world arrogance as an ideological cause and a strategic interest of Iran.”

“The Iran deal is a commitment by the government, and no administration can abandon it. I’ll surely preserve it.”

“Our foreign policy was not as successful as we wanted… A government that is not accepted by its own people cannot wield any authority when dealing with other countries.”

“The problem with the U.S. is that Americans have always tried to say that ‘our discourse is the proper discourse and you have to accept what we say.’ This isn’t dialogue. This is a monologue.”

“Veterans of conservatism believe they don’t need to listen ... They talk to people with the same tone of 40 years ago.”

“At the moment, we have a political gap between our politicians and the people. It’s not to our benefit and we should do our best while we’re competing, and while we have different approaches and orientations, to fill that gap.”

U.S. sanctions are “responsible for at most 30 percent” of the economic hardship Iranians currently face. “The other 70 percent is due to mismanagement and inefficiency in governing the country.”

“Eighty percent of our economy is public, and the public sector is inefficient, corrupting and has the highest costs with the least benefits.”

— Feb. 19, 2020, in his final campaign speech before the parliamentary election

The 2017 presidential election “sets the stage for a new era of economic transformation that, by cutting off the four-percenters from the economy, will lead to youth employment and support for the underprivileged and poor in Iran. The fight has just begun.”

— 2017, in a debate against Rouhani and other presidential candidates

“Inefficiency in solving economic problems makes it more and more difficult for many people to have peace of mind, while others want to escape responsibility and ignore any criticism by attributing it to electoral contests.”

"More of this [Rouhani] administration would mean putting the revolutionary ideals and the country's economy in harm's way.”

“The first thing that my government will do is to stabilize the currency. The second is to change the method of distribution of services and goods. Today we need the trust of our people. My government will achieve this in six months.”

“A serious change in the workings of the principlist current is one of the demands of the day… Movement on the path to neo-principalism should start as soon as possible.”

—July 22, 2020, in a statement announcing the neo-principlist movement

The Rouhani camp of moderates and reformists are “pseudo-revolutionaries” who are “consuming the roots of the revolution like termites.”

—May 17, 2017, in a speech to endorse conservative presidential candidate Ebrahim Raisi

“I personally believe in Article 44 of the Iranian constitution, which allows for the privatization of the economy, and which we are determined to implement. Any kind of privatization of state companies or semi-state owned companies…in contradiction to Article 44 must be avoided. We’ll do our best so that we have real privatization. People in the private sector will become more active.

“Through a long term program, we’re determined to turn the economy from a state owned to a private type, and this is one of the most important moves we’re making.”

“The country has so much experience in material and youth resources and creative forces that if we move forward with the advancement of the youth…we will return economic stability to the country in a five-year plan.”

“This revolution was won by relying on the enthusiasm and motivation of the youth, and this system ensured its survival by sacrificing them. There is no choice but to rely on young people to do great and lasting work, and one of the great things is the courage of "self-criticism" and the transformation of fundamentalism, without undermining this trend against a competitor whose main art is to inject artificial fear into society.”