Since 2003, Iran’s space program has steadily evolved – from a limited initiative to launch research satellites into a more ambitious project to enhance space reconnaissance capabilities and test military rockets. The program, still in its adolescence, has progressed through three phases: research and development with assistance from Russia beginning in the late 1990s; satellite launches for civilian research beginning in 2009; and a military program unveiled in 2020.

Iran has repeatedly claimed that the space program is to enhance science, communication capabilities and environmental research. But the United States has claimed that the satellite launches are cover for ballistic missile tests. As part of its space program, the Islamic Republic has also tested rockets that could be repurposed into long-range missiles. “Tehran’s pursuit of a national space program supports both civilian and military goals, including boosting national pride, economic development, and military modernization,” the Defense Intelligence Agency reported in February 2019. 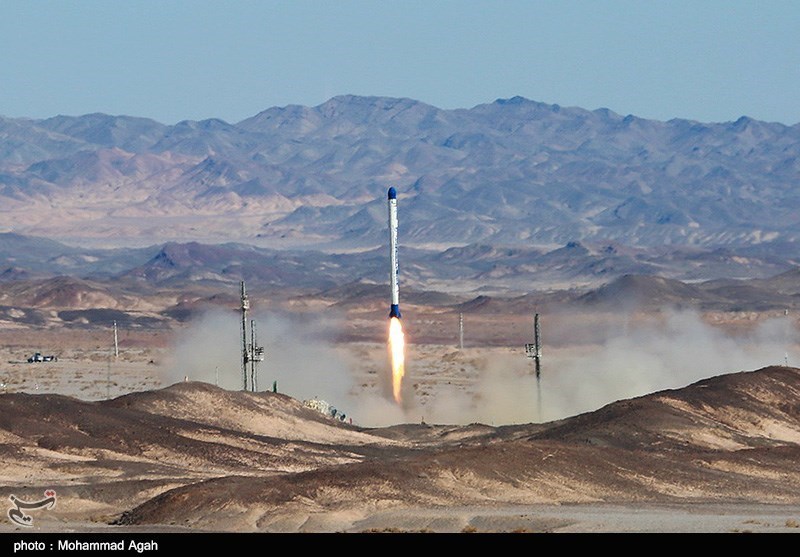 Created in 2003, the Iranian Space Agency (ISA) answers directly to the Supreme Space Council, which is chaired by the president and presided over by the defense minister. The agency initially received extensive help from Russia, including materiel, scientific training and use of launch sites. But Iran developed domestic spaceflight capabilities in February 2009, when it became the first Islamic country – and ninth country in the world – to launch a satellite into orbit. Over the next decade, Iran successfully launched four research satellites and tested two space rocket variants:

The third turning point was in April 2020, when the Islamic Revolutionary Guard Corps (IRGC) launched the country’s first military reconnaissance satellite into orbit. The launch indicated the existence of a military space program. The satellite was launched by the Qased (Messenger), a three-stage rocket that used more advanced technology than in previous rocket tests. Secretary of State Pompeo condemned the launch as proof of Iran’s military ambitions in space. “For years, Iran has claimed its space program is purely peaceful and civilian,” Pompeo said. ”The most recent military launch, which was developed and conducted in secret, proves that these statements were lies.”

Starting in the 1990s, Russia played a critical role in the early development of the Iranian space program. In 1997, Moscow reportedly sold Tehran components from the SS-4, a Soviet medium-range ballistic missile, to help build its own missiles. Russia “helped Iran save years” in the development of the Shahab-3 missile, which formed the basis of the Safir space rocket, the Central Intelligence Agency (CIA) reported in 2000.

After the Iranian Space Agency was created in 2003, Russia trained Iranian rocket scientists, provided satellite components and allowed the Islamic Republic to use Russian spaceports for launches. In October 2005, Russia and Iran jointly launched a satellite, the Sina-1, from Plesetsk, Russia. The satellite was built by a Russian company and launched aboard a Russian-made Kosmos 3M rocket.

Under pressure from the other major world powers, Russia curtailed its cooperation with Iran in the late 2000s. In March 2008, the U.N. Security Council passed Resolution 1803, which restricted the transfer of “sensitive technologies” that could be used for Iran’s nuclear and ballistic missile programs. In June 2010, the Security Council passed Resolution 1929, which banned all U.N. member states from transferring any ballistic missile technology. By 2011, Moscow said that it would no longer launch Iranian satellites from Russian launchpads and paused manufacture of satellites for Iran.

President Mahmoud Ahmadinejad, who served from 2005 to 2013, made domestic space launches a national priority. In February 2008, he personally led the countdown for the launch of the Kavoshgar-1 (Researcher) rocket. “We need to have an active presence in space,” Ahmadinejad said. “We witness today that Iran has taken its first step in space very firmly, precisely and with awareness.”

Under Ahmadinejad, Iran took major strides in civilian spaceflight. It launched three homemade satellites into orbit, inaugurated a new spaceport, opened a center for tracking space objects and claimed to have sent a monkey to space and returned it safely to Earth. Ahmadinejad later declared that Iran would place an astronaut into orbit by 2020 and on the moon by 2025. He even volunteered to be the first Iranian sent to space. “I'm ready to be the first Iranian to sacrifice myself for our country's scientists,” he said, according to the official IRNA news agency. 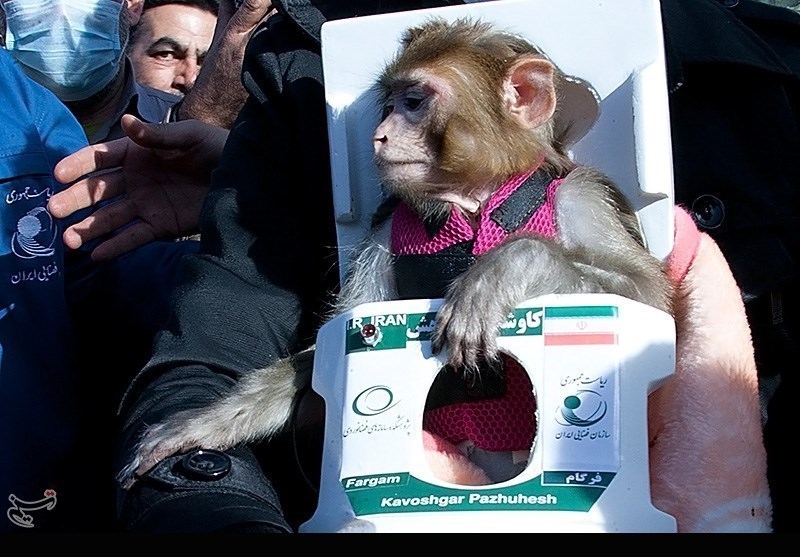 After Ahmadinejad left office, Iran’s space ambitions took a backseat to economic issues. Following President Hassan Rouhani’s election in 2013, Iran paused most rocket and missile launches during negotiations with the major world powers over the country’s nuclear program. Iran resumed its rocket and missile tests after the Joint Comprehensive Plan of Action (JCPOA) in 2015, but Tehran scraped plans for a human space flight due to the exorbitant cost.

Iran’s space program has had many problems. Between 2008 and 2019, more than two-thirds of Iranian satellites failed to enter orbit. By comparison, the other nine space programs—in Asia, Europe and North America—failed to launch only five percent of the time. In 2019, Iran failed in three back-to-back rocket launches, which led the head of Iran’s missile program to accuse the United States of sabotaging the launches. President Donald Trump denied U.S. involvement. “The United States of America was not involved in the catastrophic accident during final launch preparations for the Safir SLV Launch at Semnan Launch Site One in Iran,” he tweeted. “I wish Iran best wishes and good luck in determining what happened at Site One.”

The United States of America was not involved in the catastrophic accident during final launch preparations for the Safir SLV Launch at Semnan Launch Site One in Iran. I wish Iran best wishes and good luck in determining what happened at Site One. pic.twitter.com/z0iDj2L0Y3

The IRGC’s launch of a reconnaissance satellite in April 2020 unveiled a military space program. The Noor (Light) satellite was launched from an IRGC base near the Imam Khomeini Spaceport, which houses Iran’s civilian space program. The launch employed the new Qased rocket. It was the first time Iran had successfully used a three-stage rocket.

Hossein Salami, the IRGC commander, called the launch a “leap” in Iran’s space capabilities. “The world’s powerful armies do not have a comprehensive defense plan without being in space,” he said. “Achieving this superior technology that takes us into space and expands the realm of our abilities is a strategic achievement.” 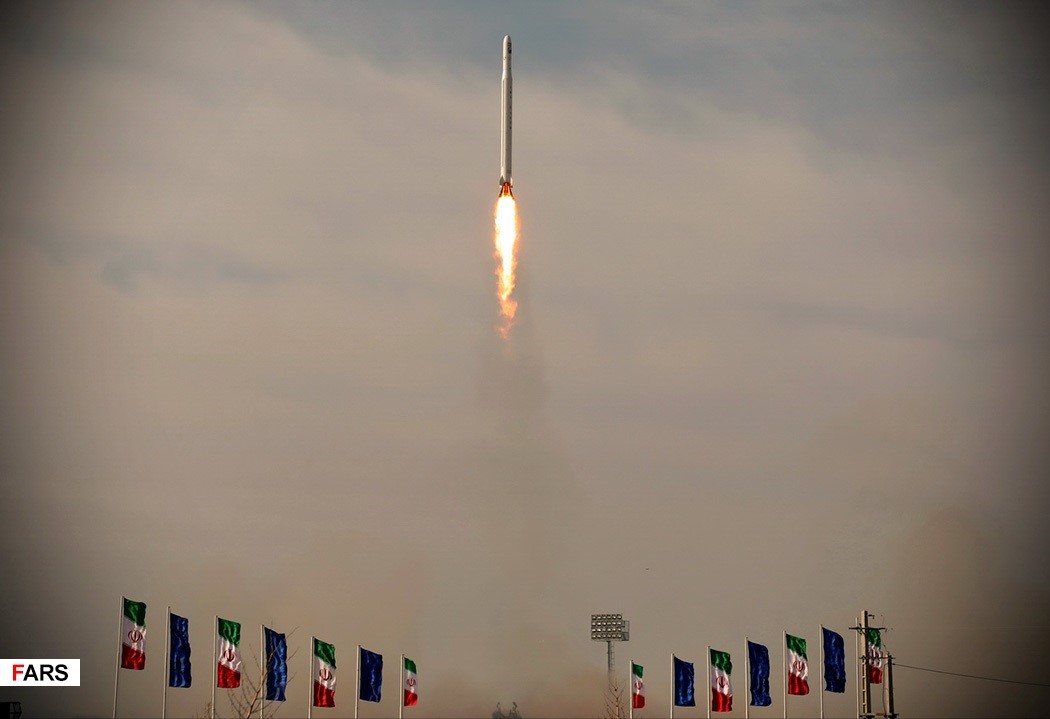 The IRGC launched its first military satellite on April 22, 2020

The Trump administration said that the launch incorporated technologies interchangeable with those of intercontinental ballistic missiles. Secretary of State Pompeo demanded that Iran “be held accountable” and urged other nations to help constrain Iran’s “dangerous” space program. Britain, France and Germany – the three European parties to the JCPOA –  joined the United States in condemning the launch.

But the United States faced pushback from Russia. Vassily Nebenzia, the Russian ambassador to the U.N., accused the Trump administration of using the launch to advance its maximum pressure policy. “The ongoing attempts of the United States side to deprive Iran of the right to reap the benefits of peaceful space technology under false pretexts are a cause for serious concern and profound regret,” Nebenzia wrote the Security Council.

The U.S. intelligence community has warned about the potential of Iran’s space program. In October 2000, the Central Intelligence Agency said that Iran’s plans to build the Shahab-4 space rocket could easily be converted into a ballistic missile. “The transfer of ballistic missile technology from Russia to Iran was substantial [in 2000], and in our judgment will continue to accelerate Iranian efforts to develop new missiles and to become self-sufficient in production,” CIA Director George Tenet testified to Congress in February 2001.

U.S. officials expressed greater concern with the space program after Iran launched its first rocket capable of carrying a satellite into orbit in February 2008. “The kinds of technologies and capabilities that are needed in order to launch a space vehicle for orbit are the same kinds of capabilities and technologies that one would employ for long-range ballistic missiles,” the State Department said.

In October 2007, President George W. Bush announced he would deploy missile defense systems to Europe to defend it against Iranian ballistic missiles. “Iranian officials have declared that they are developing missiles with a range of 1,200 miles, which would give them the capability to strike many of our NATO allies,” President Bush said at National Defense University.

The administration mobilized international support to curtail Iran’s space and missile programs. In 2010, the Obama administration won support for U.N. Resolution 1929, which banned all transfers of ballistic missile technology to Iran. In 2015, the nuclear deal—negotiated between Iran and the world’s six major powers—stipulated that the U.N. embargo on transferring ballistic missile technology would continue until 2023.

In 2016, the U.S. intelligence community estimated that Iran’s civilian space program would allow research on ballistic missiles even under the JCPOA. “Iran’s progress on space launch vehicles—along with its desire to deter the United States and its allies—provides Tehran with the means and motivation to develop longer-range missiles, including ICBMs,” Director of National Intelligence James Clapper testified to Congress in February 2016.

The Trump administration reportedly accelerated covert operations to sabotage Iran’s space launches and missile tests. As CIA Director, Mike Pompeo reportedly increased resources for the “left of launch” program. In June 2019, President Trump reportedly ordered a cyberattack on Iranian missile launchers. The cyberattack was reportedly in response to Iran’s attacks on oil tankers in the Strait of Hormuz. 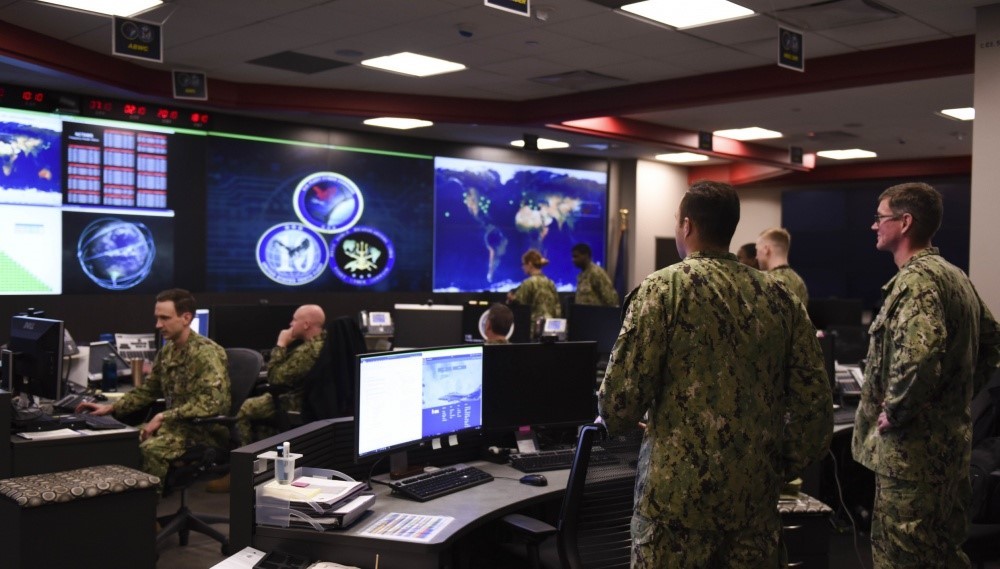 In September 2019, the Trump administration sanctioned the Iranian Space Agency and two of its research arms, the Iranian Astronautics Research Institute and the Iran Research Center. Secretary of State Pompeo called Iran’s civilian space program a “cover” for its ballistic missile program. “The United States will not allow Iran to use its space launch program as cover to advance its ballistic missile programs,” he said.

April 2003: The Iranian Space Agency (ISA) is founded. Its mission is to coordinate Iran’s space activities and technological advancements.

Oct. 27, 2005: Iran and Russia jointly launched a satellite, the Sina-1, into orbit. The satellite carried photographic and telecommunications equipment for scientific research. The satellite was built by a Russian company, the launchpad was located in northern Russia and the rocket was a Russian-made Kosmos 3M.

Feb. 25, 2007: Iran launched its first homemade rocket capable of reaching space. The rocket was based off the Shahab-3 ballistic missile.

Sep. 7, 2008: A scientific research satellite, the Enivornment-1, was launched on a Chinese rocket. The project was a collaboration between Iran, China and Thailand.

Feb. 3, 2009: Iran launched its first homemade satellite, Omid (Hope), into orbit. The satellite was carried by a Safir (Ambassador) rocket. Iran’s foreign minister said the satellite was “for purely peaceful purposes” such as gathering environmental and climate data.

July 2010: Russia said that it would no longer launch Iranian satellites into orbit.

Feb. 3, 2012: Iran launched a third homemade satellite, Navid (Promise of Science and Industry), into orbit. Hamid Fazeli, the head of the ISA, said that the satellite would collect data for weather forecasting and predicting natural disasters.

September 2012: Satellite imagery showed what may have been a catastrophic failed launch from Semnan, although no official Iranian statement was made.

Jan. 28, 2013: Iran claimed it had successfully sent a monkey into space and returned it safely to Earth. Observers expressed doubt when images released by the government depicted a different animal than had been launched into orbit.

June 9, 2013: Iran opened a new center for tracking objecting in space, such as foreign satellites.

Dec. 14, 2013: Iran claimed a second monkey, Fargam, had been sent into space and returned safely to Earth.

April 19, 2016: The Simorgh (Phoenix) rocket performed a “suborbital test flight.” A U.S. defense official said that the flight was “either an unsuccessful launch or a test of a third stage” rocket.

July 17, 2017: Iran claimed to launch its fifth homemade satellite on a Simorgh (Phoenix) rocket. But no satellite was detected in orbit, and U.S. officials concluded the launch was a “catastrophic failure.”

Aug. 29, 2019: A rocket exploded on its launchpad at the Imam Khomeini Space Center. The explosion was Iran’s third failed space launch of 2019.

April 22, 2020: Iran launched its first military reconnaissance satellite, the Noor (Light), into orbit. The satellite was launched from a facility in Iran’s remote Central Desert.