During a wargame on July 28, Iran ran a mock attack on a fake U.S. aircraft carrier in the Persian Gulf. The Islamic Revolutionary Guard Corps (IRGC) fired missiles at a dummy war ship near the Strait of Hormuz. The exercise – dubbed Great Prophet 14 – involved the IRGC’s air force and navy, but Iran’s conventional navy, which operates mainly in the Gulf of Oman and the Caspian Sea, did not participate.

In the military exercise, IRGC commandos rappelled from helicopters onto the vessel, which was 650 feet long – about 300 feet shorter than a real U.S. aircraft carrier. Speedboats encircled the fake carrier and fired rockets at it. IRGC naval scuba divers carried out mock operations underwater against the fake carrier. Satellite imagery showed limited damage to the replica's bow, although mock U.S. fighter jets on top were destroyed.

The Revolutionary Guards declared the offensive exercise a success. “We will not invade any country from the beginning, but we are completely aggressive in tactics and operations,” General Hossein Salami, the IRGC commander, said. 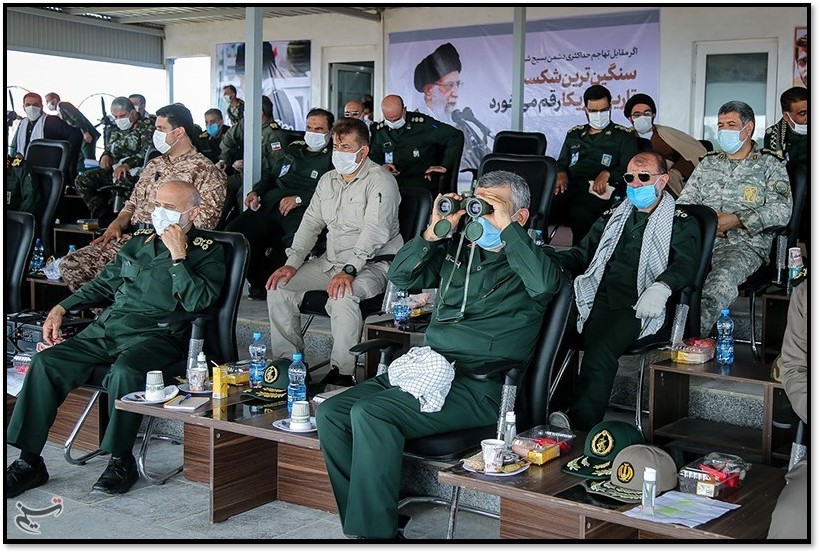 U.S. Central Command condemned the wargame as “irresponsible and reckless,” according to Commander Rebecca Rebarich, a spokesperson for the U.S. Fifth Fleet based in Bahrain. "The U.S. Navy conducts defensive exercises with our partners promoting maritime security in support of freedom of navigation whereas Iran conducts offensive exercises, attempting to intimidate and coerce.”

The U.S. Navy has up to 22 warships with the Fifth Fleet, based in Bahrain, in the Persian Gulf. The simulated attack occurred just one week after the USS Nimitz arrived in the Gulf, on rotation. The United States responded to Iran’s wargame by putting two bases – al Udeid in Qatar and al Dhafra in Abu Dhabi – on temporary alert.

Prophet 14 was not the first time Iran used the fake carrier—the same one—in a wargame. It was built in 2014. It can be moved by a tug boat but not on its own. Iranian news outlets claimed at the time that it was a prop for a film recounting the shootdown of Iran Air Flight 655 by the USS Vincennes. In February 2015, the IRGC fired cruise missiles at the replica during the Great Prophet 9 exercises. 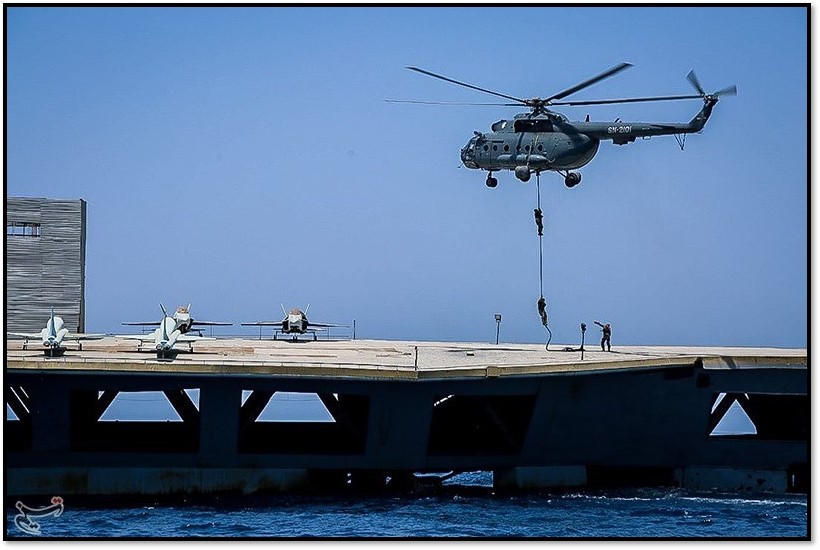 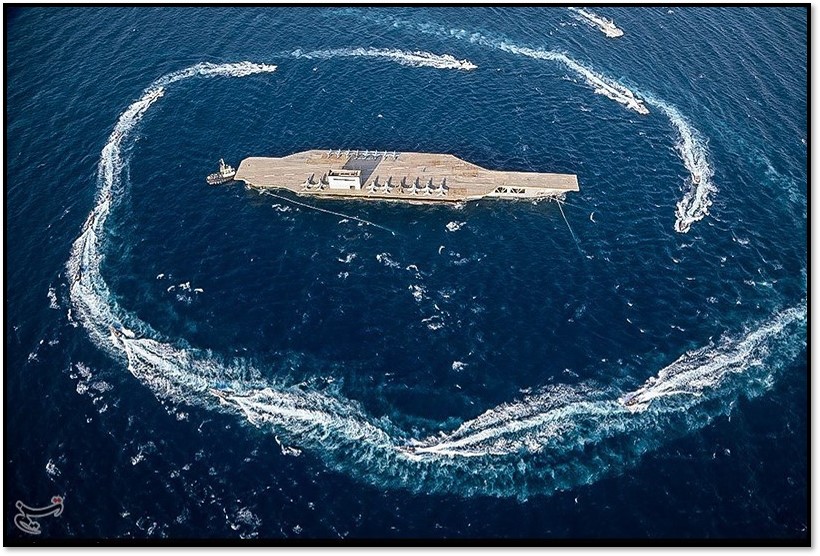 Real damage to fake ship: Newest @Maxar satellite images from today show some of the damage to fighter jets on the mock aircraft carrier, as well as to the bow of the vessel. The vessel is part of #Iran military exercise in Strait of Hormuz pic.twitter.com/nOlVEPS6EQ

The fake carrier, however, capsized after the exercise. Satellite photos taken on July 31 showed the mock carrier partially submerged near Bandar Abbas. The reason why the vessel sank was unclear. H. I. Sutton, a defense contributor for Forbes, speculated that either “damage sustained during the exercise” or “a mishap in towing the bulky vessel” could have caused it to sink.

thanks to the heads from @ckoettl I went on the hunt. Imagery courtesy of @planetlabs from today shows the #IRGC’s fake #US Navy Nimitz-Class Carrier capsized just south of Bandar Abbas Port, #Iran after the Great Prophet XIV war games. I assume we will see more propaganda soon. pic.twitter.com/pqjmTInbRW

The damaged vessel posed a hazard to ships trying to navigate the port. The waters near Bandar Abbas are approximately 45 feet deep – shallow enough to damage ships attempting to sail over the sunken carrier.

Looks like the Iranians have created a nice little hazard for themselves right outside bandar abbas... You had one job IRGCN... [And... go twitter] pic.twitter.com/tKBE7FrKgq

During Great Prophet 14, Iran used anti-aircraft batteries to shoot down (its own) drones flying over Bandar Abbas. 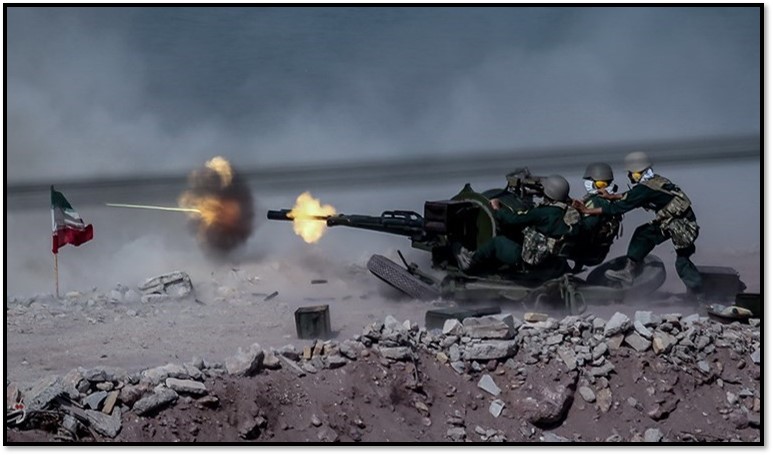 The IRGC also launched ballistic missiles from an underground base in the central desert at mockups of U.S. missile defense systems. State-media claimed the exercises were monitored by a military satellite that the Revolutionary Guards had launched into orbit on April 22. 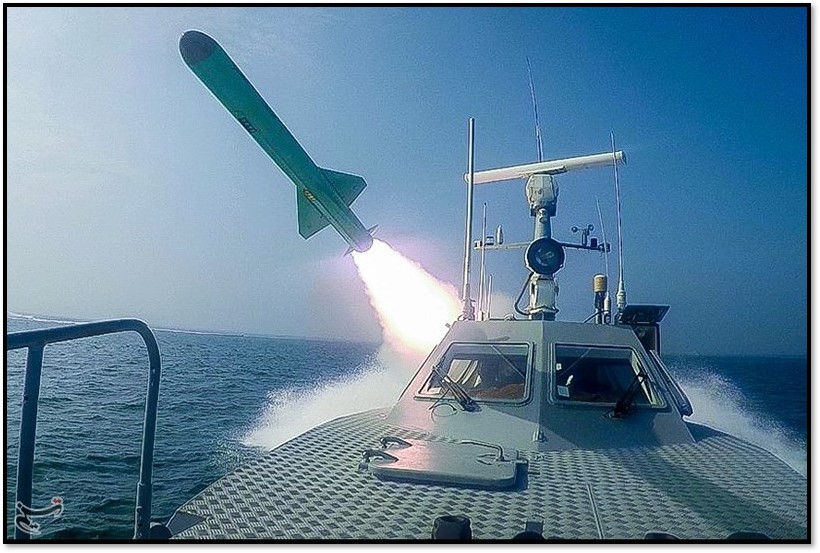 An IRGC boat fires a missile 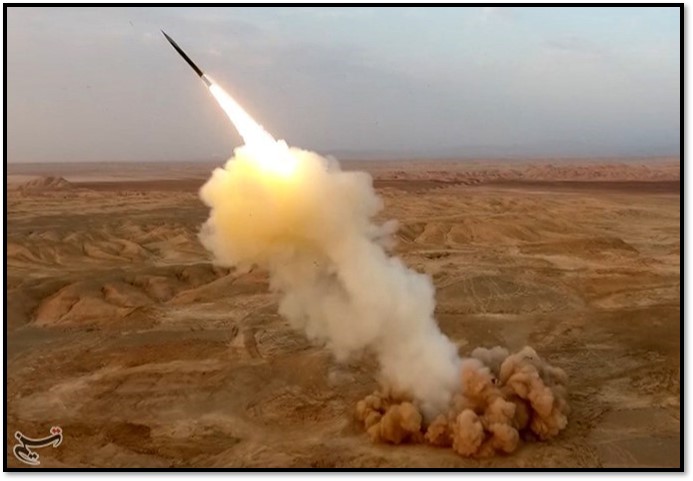 IRGC fires a ballistic missile from an underground silo 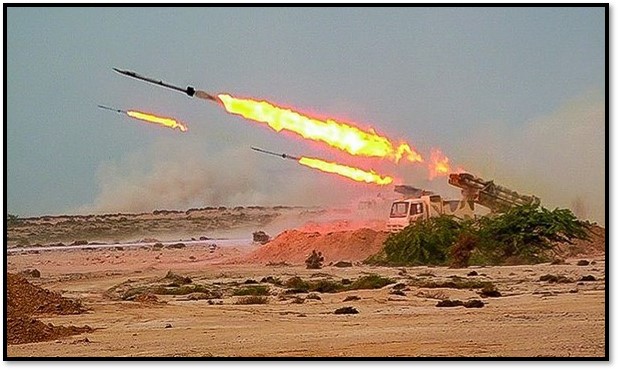 A truck fires missiles from shore

Iran and the United States bashed each other on social media after the exercise was completed.

Iranian hardline media circulating a meme of a casket-shaped US aircraft carrier complete with the stamp " ضربه متقابل", or reciprocal strike, referring to Suleimani assassination. https://t.co/Em8R4j9UMo

Iranian media depicted the carrier as casket-shaped with the hashtag “reciprocal strike.” The hashtag referred to Supreme Leader Ali Khamenei’s pledge to retaliate for the assassination of Qassem Soleimani.

The U.S. Navy posted a response on Instagram mocking Iran for building ships that could easily be targeted and destroyed.