On July 22, Iranian Foreign Minister Mohammad Javad Zarif met with Sergey Lavrov, his Russian counterpart, in Moscow to discuss trade, the Joint Comprehensive Plan of Action, the situation in Syria and security in the Persian Gulf. During the visit, Zarif announced that Iran intended to renew a cooperation agreement with Russia, which included a series of petrochemical and weapons deals signed by the two countries in 2000. He also proposed a new “long term accord” with the Kremlin. “Relations between the Islamic Republic of Iran and the Russian Federation are strategic, and in the current situation, where major developments are taking place at the international level, it is essential that we hold regular talks with Russian and Chinese governments,” Zarif said at a joint press conference with Lavrov.

Iran has floated the idea of a pact among countries—Iran, Russia and China—under U.S. sanctions. “I believe it’s high time that we created a club of countries hit by sanctions,” Kazem Jalali, the Iranian ambassador to Moscow, said in an interview with Kommersant newspaper. “Among its members will be many strong powers with developed economies: Russia, China and Iran.” They want Russia to be weak, China to be economically subordinated to them and Iran to be come their colony. That’s why we need to cooperate, help each other and complement each other. We have got huge opportunities and we just need to show political will and make efforts in order to develop this potential in the right way. Iran has something to offer Russia and China. We are a large country with [a] big and rather young population, we have got many mineral resources and advanced technology. If we make joint efforts we will overcome U.S. pressure.” 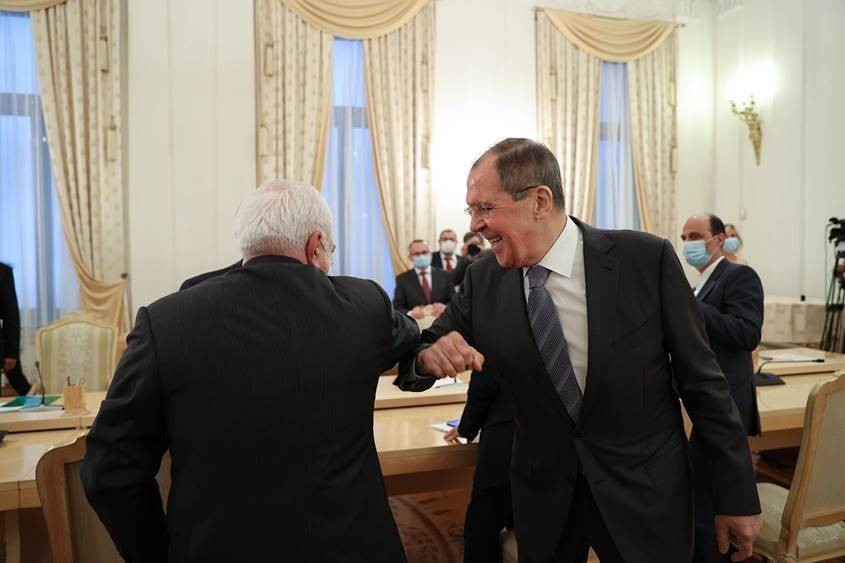 Zarif and Lavrov also rejected U.S. attempts to extend a U.N. arms embargo on Iran. “Most countries, including Europeans, have declared that it should not be touched. But I would like to emphasize that any other method that will be used to change this provision will mean a violation of the entire agreement,” Zarif said after the meeting. “Our position is clear, we are against such attempts, and we do not see any grounds for these attempts to succeed," Lavrov added.

During his visit, Zarif also spoke with Russian President Vladimir Putin by phone only--because of COVID-19 health protocols—to deliver a message from Iranian President Hassan Rouhani. “I read out the special message of President Rouhani on the JCPOA to his Russian counterpart and we also discussed various issues of mutual interest,” Zarif said, according to IRNA news agency. The following are photos from Zarif’s visit.