In July 2020, Iran and Iraq held diplomatic talks to ease bilateral tensions and discuss the U.S. presence in Iraq. On July 21, Supreme Leader Ali Khamenei hosted Iraqi Prime Minister Mustafa Kadhimi in Tehran. The Supreme Leader said that Iraq should expel U.S. forces for the assassination of General Qassem Soleimani, the Qods Force commander, in Baghdad in January. “They killed your guest in your home, and they blatantly confessed to this crime,” Khamenei said. “This is not a trivial matter." Kadhimi pledged that he would not allow foreign militaries based inside Iraq to threaten Iran.

The meeting was Khamenei’s first in-person meeting since the outbreak of the coronavirus in February 2020; it was Kadhimi’s first trip abroad since becoming prime minister in May 2020. Kadhimi also met with President Hassan Rouhani and Secretary of the Supreme National Security Council Ali Shamkhani. The Tehran summit followed a visit by Iranian Foreign Minister Javad Zarif to Baghdad and Erbil for talks with Iraqi and Kurdish officials on July 19. The trip was Zarif’s first to Iraq since Soleimani’s death in January.

The diplomatic talks were convened amid friction between Tehran and Baghdad over Iran-backed militias, border closure and Iran’s influence on Iraqi politics. In June, shortly after assuming office, Kadhimi ordered a raid on Kataib Hezbollah, a Shiite militia with close ties to Tehran. In March, the Iraqi government closed the border to prevent the spread of the coronavirus. Baghdad partially reopened the border in early July after intense pressure from Iranian officials. The Iraqi prime minister had also planned to visit Saudi Arabia, Iran’s main rival in the Persian Gulf. The trip was postponed when King Salman was hospitalized. The following are photos from the meetings in Tehran, Baghdad and Erbil. 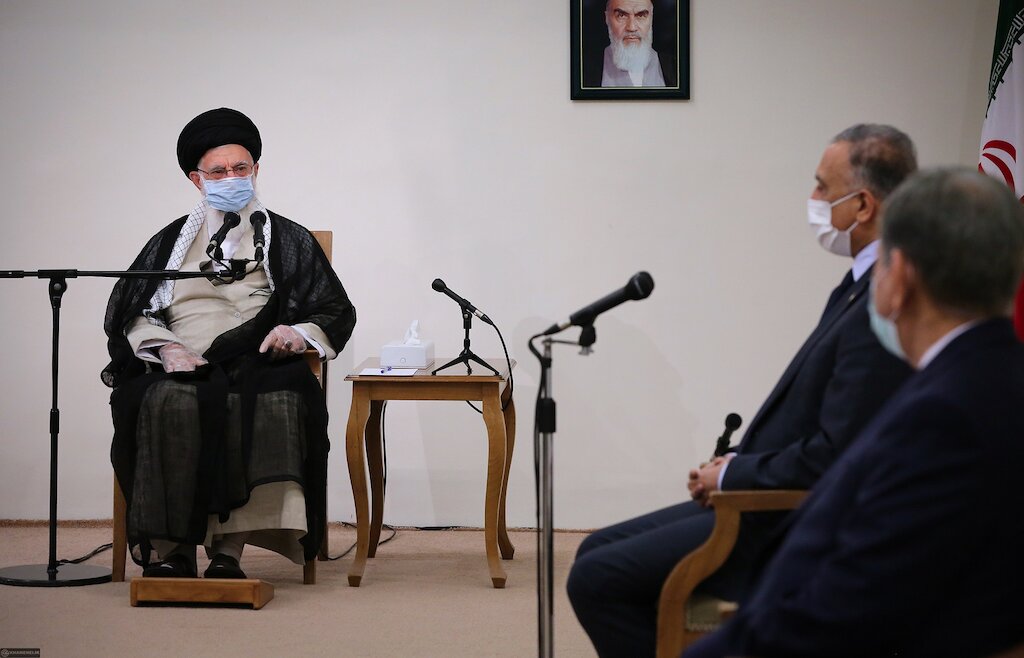 Khamenei told Kadhimi, "Iran expects the decision of the Iraqi government, nation and parliament to expel the U.S. to be pursued because U.S. presence causes insecurity…The Islamic Republic of Iran will never forget the martyrdom of Hajj Qassem Soleimani and will definitely strike a reciprocal blow to the U.S.” 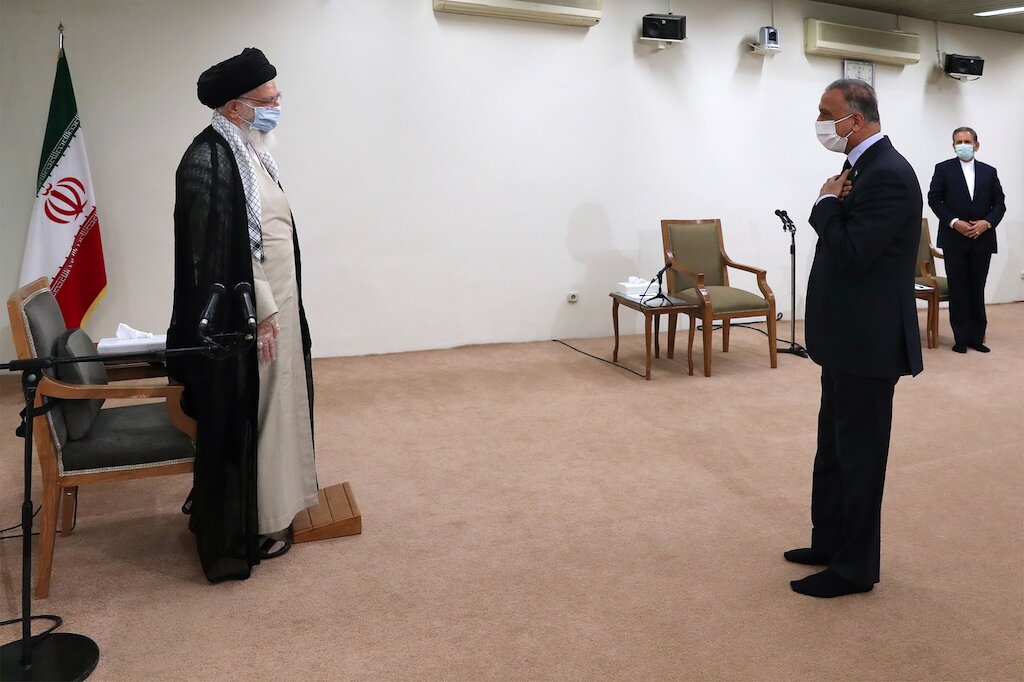 Kadhimi responded, "Iraq is a country that won't allow any aggression or challenge to Iran from its territory.” 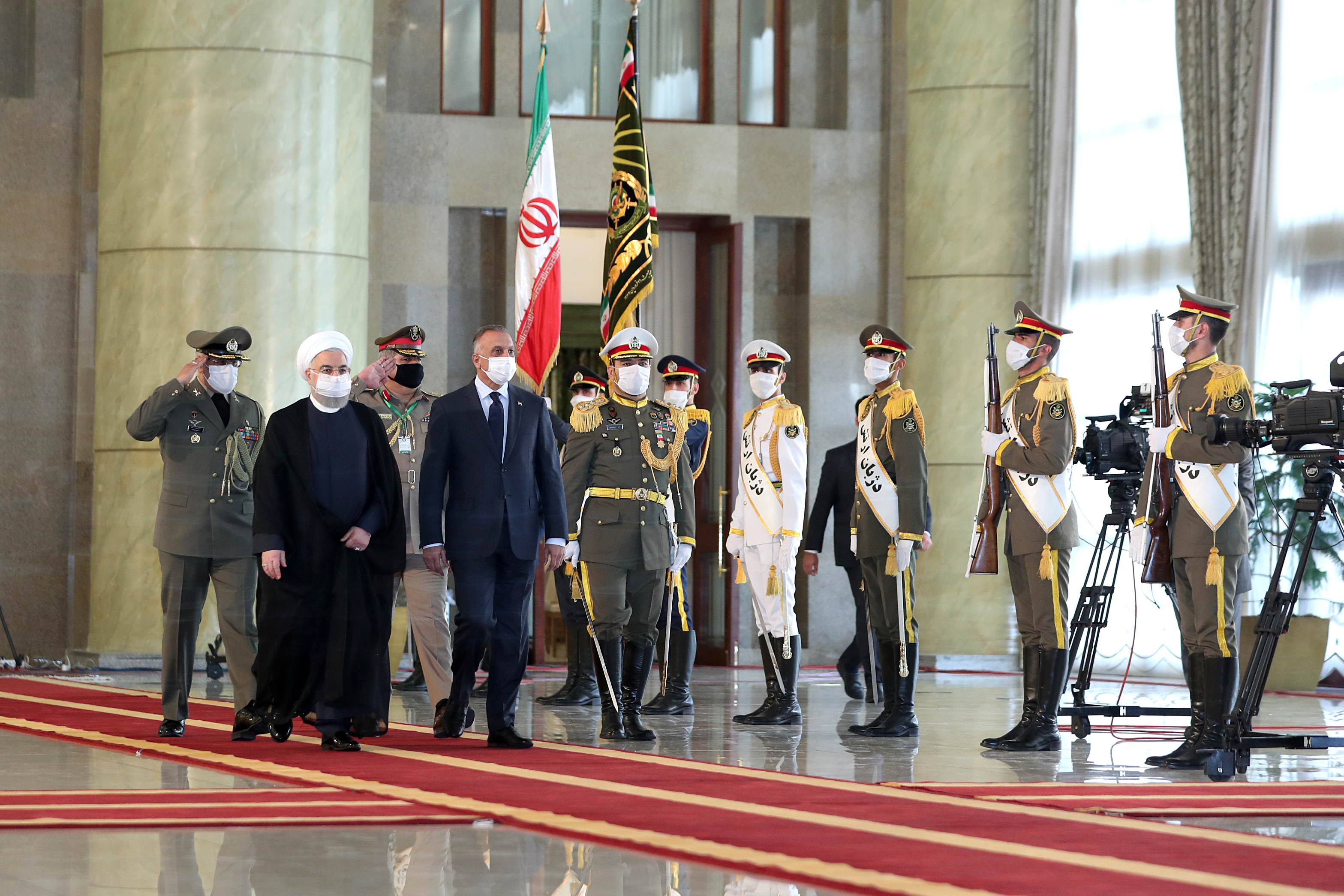 Rouhani told Kadhimi, "Foreign forces will not be able to disrupt the brotherly relations between the two long-time neighbors." 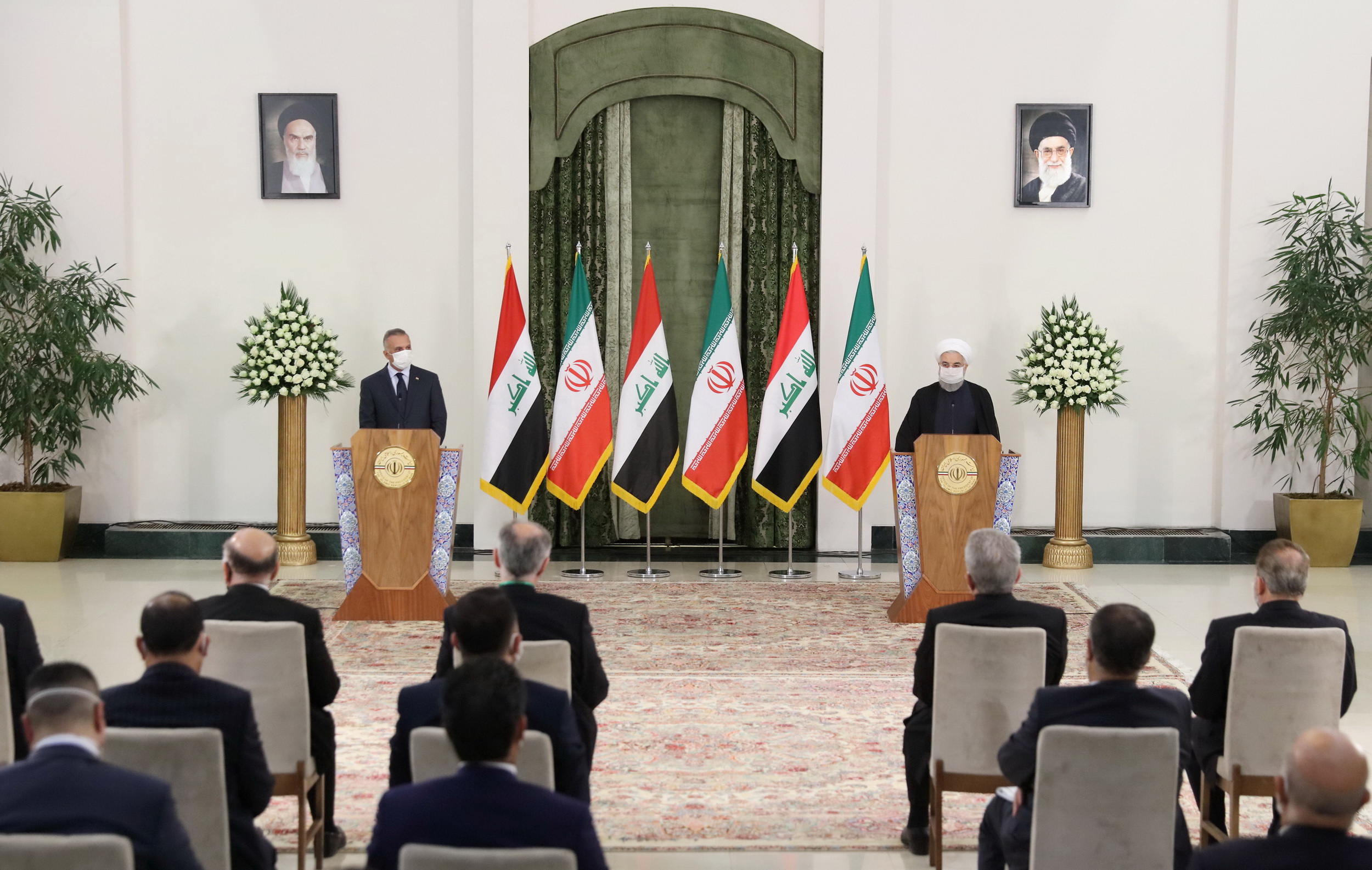 “The people of Iraq want good relations with the Islamic Republic of Iran based on the principle of non-interference in the internal affairs of both countries,” Kadhimi said at a joint press conference with Rouhani. 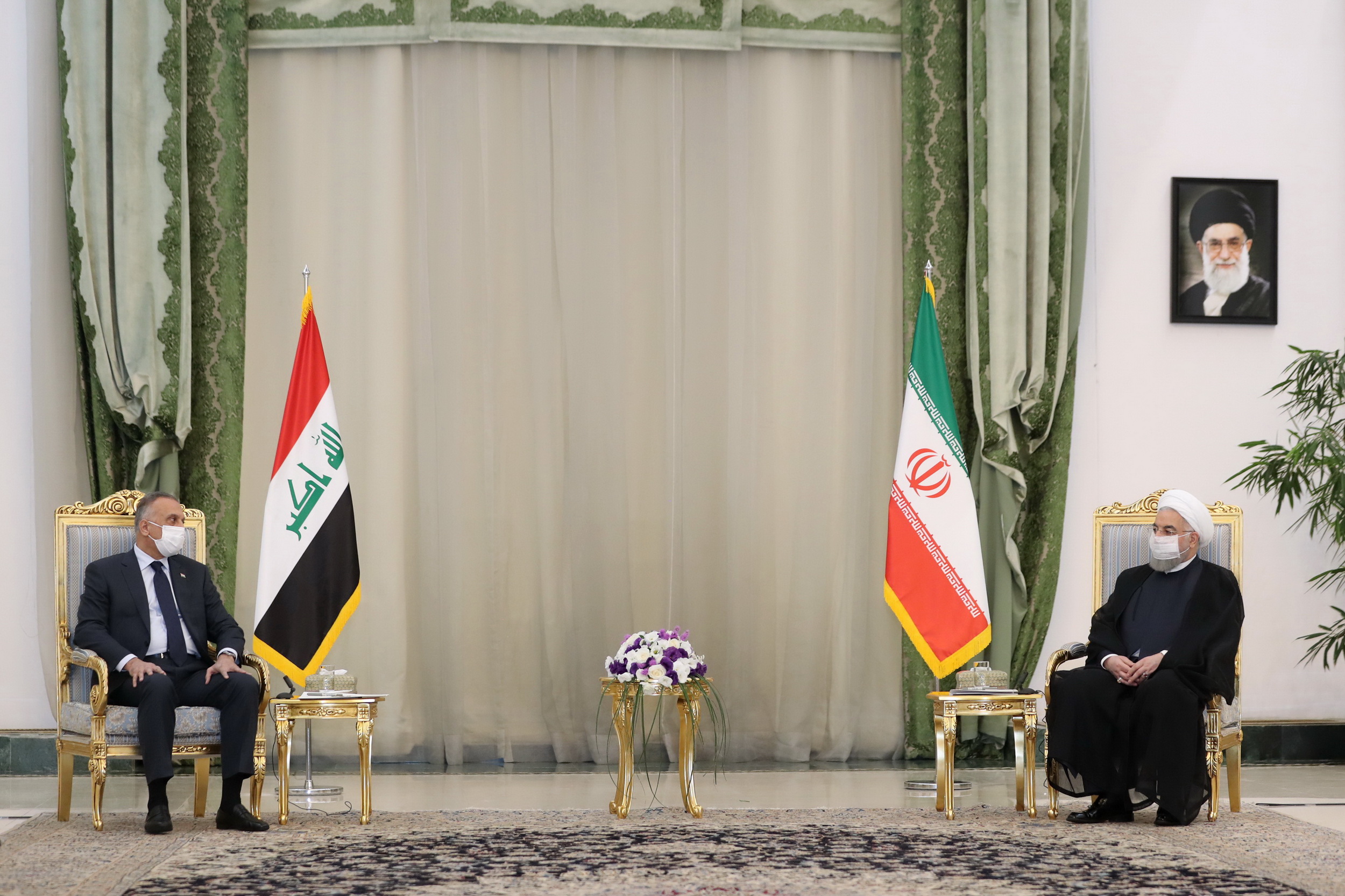 “During the few months that have passed since Mr. Kadhimi took office as Prime Minister of Iraq, we have witnessed a good move in trade relations between the two countries,” Rouhani said. 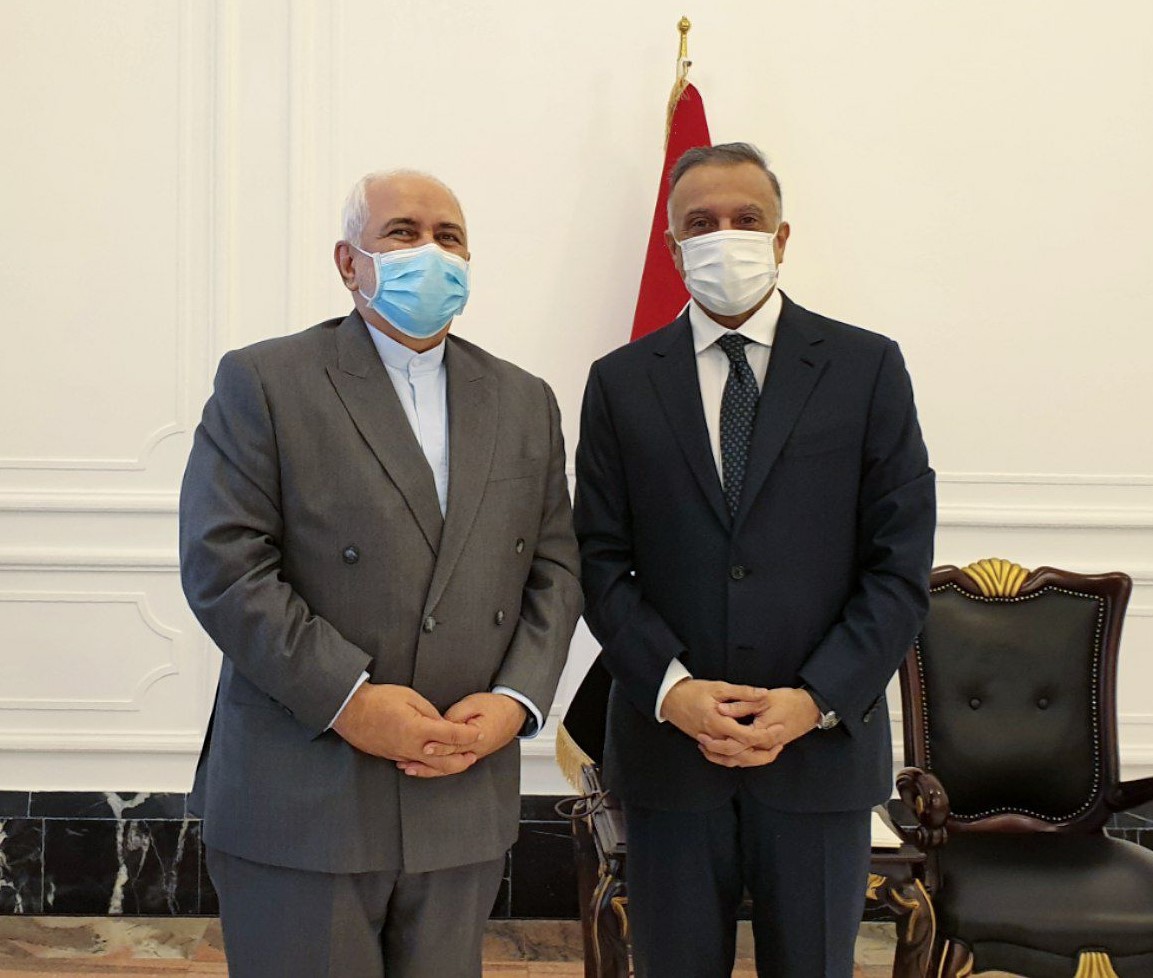 "Iran-Iraq relations will not be shaken,” Zarif said during his meeting with Kadhimi in Baghdad.

During my meeting with @JZarif today, we reaffirmed the friendly relations between the Kurdistan Region and Iran, based on mutual respect. We stressed the importance of promoting regional peace and stability. pic.twitter.com/2KK59RwyVh

“Today, we reaffirmed the friendly relations between the Kurdistan Region and Iran, based on mutual respect,” Masrour Barzani, prime minister of the Kurdistan Regional Government, tweeted after meeting Zarif. “We stressed the importance of promoting regional peace and stability.”

Had a productive meeting with Iran's Minister of Foreign Affairs, @JZarif at the Barzani HQ today. We discussed the current political situations in the Kurdistan Region, Iraq, and beyond as well as the ongoing global health crisis with the hope of expeditious outcomes. pic.twitter.com/f98WVqDnhw

“We discussed the current political situations in the Kurdistan Region, Iraq, and beyond as well as the ongoing global health crisis with the hope of expeditious outcomes,” Masoud Barzani, leader of the Kurdistan Democratic Party, tweeted after meeting with Zarif.

“What is of great importance to the Islamic Republic in its bilateral relations with Iraq are the interests, security, dignity, and regional authority of Iraq in addition to the improvement of circumstances in that country.”

“Iran wishes to see an Iraq which is dignified and independent with its territorial integrity and internal unity and cohesion protected.”

“Iran is definitely opposed to anything that weakens the Iraqi government. Of course, the Americans’ outlook concerning Iraq is the exact opposite of ours due to the fact that the US is an enemy, in the true sense of the word. That is why it does not wish to see an independent, strong Iraq that enjoys a government formed on the basis of the people’s votes.”

“The Americans do not care who the Prime Minister of Iraq is. They only want to establish a government like the one formed by Paul Bremer, the former American ruler of Iraq just after Saddam’s downfall. Iran does not interfere in Iraqi-American relations, but it expects its Iraqi friends to know the US and to bear in mind that the presence of the US in any country will bring about corruption, ruin and destruction.”

“The Islamic Republic expects the decision made by the Iraqi government, nation and parliament to expel the Americans to be implemented because their presence leads to insecurity.”

“They killed your guest in your home, and they blatantly confessed to this crime. This is not a trivial matter. The Islamic Republic of Iran will never forget this, and it will definitely strike a reciprocal blow to the Americans.”

“The Americans and their agents are always seeking to create a power vacuum in regional countries in order to cause a chaos and prepare the ground for their own intervention. This is what they did in Yemen. Everyone can see the appalling circumstances in Yemen today.”

“Wisdom, religion and experience dictate that Iran-Iraq relations be reinforced in all areas. Obviously, there are some countries which are opposed to the expansion of Iran-Iraq relations. The US is at the top of the list. But, we should not fear the US at all because it cannot do a single thing.”

“The Americans cause trouble and create some hurdles, but the Iraqi government should continue its path with strength and without heeding these interferences. It should also protect the Iraqi people who are a source of support for it.”

“Hashd al-Shabi is another great blessing in Iraq, which should be safeguarded.”