Iran’s failure to contain the COVID-19 outbreak at home contributed to spread of the virus in the Arab world. Three countries with close ties to Tehran—Iraq, Syria and Lebanon—were hit hard by the pandemic. The governments of Lebanon and Iraq traced their first known cases of coronavirus directly to Iran. Syria did not identify the origin of its outbreak, but the large number of Iranian militiamen and pilgrims in the country hindered the government’s ability to contain the virus. By April 22, Iraq, Lebanon and Syria confirmed hundreds of cases, with additional unconfirmed cases.

The pandemic tested relations by exacerbating political and economic issues between Iran and the three Arab nations on its western flank. In Lebanon, the outbreak tested the Hezbollah-dominated government amid a currency crisis that threatened the Lebanese economy with collapse. In Iraq, the virus fueled anti-Iran sentiment among protesters who had for months decried Tehran’s oversized influence in their country. And in Syria, the virus led Damascus to limit its interactions with Iranian military advisors and religious pilgrims.

On February 21, Lebanon confirmed the first case of the coronavirus in a 45-year-old woman who had traveled to Iran. The government immediately reduced the number of arrivals from Iran but did not halt all flights between the two countries. Instead, the government waited more than two weeks before banning flights from Iran and ten other countries with significant outbreaks.

The Lebanese opposition criticized Hezbollah, which controls the country’s Health Ministry, for not acting sooner. Anti-Hezbollah media outlets even blamed the group’s close ties with Iran for enabling its further spread within the country. “Thank you, Iran, for allowing a jet carrying people infected with coronavirus to enter our airspace. Is this the way countries cooperate and is this the help that your promised Lebanon?” said an editorial on the local MTV station, a channel critical of the Shiite political party.

Hezbollah’s relationship to Iran came under even greater scrutiny as its fighters and party officials were infected. Hezbollah quarantined at least four senior leaders who met in Beirut with Iranian military officials who later tested positive for the virus. Arab media claimed that Hezbollah of secretly treating Iranian military commanders at hospitals under its control. Secretary-General Hassan Nasrallah began self-quarantine as a precautionary measure.

Hezbollah mobilized its medical resources to combat perceptions it was failing to address the virus. It deployed nearly 25,000 health care professionals and more than 100 emergency vehicles to handle COVID-19 patients. Hezbollah said it had reserved beds in its Beirut hospital for treating coronavirus patients and prepared 32 medical centers for overflow patients.

Hezbollah has ambulances ready to transport suspected #COVIDー19 cases in #Beirut to hospitals. The #Iran-backed group provides social services to its electorate, + participating in military campaigns & training for other combatants in #Syria & #Iraq #الضاحية_الجنوبية #حزب_الله pic.twitter.com/1sckXwjMrF

On February 24, Iraq confirmed its first case of the coronavirus in an Iranian student visiting Najaf. Calls by Iraqi protesters to close the borders had begun immediately after the first case in Iran was confirmed on February 19. The same day, the Interior Ministry suspended visa services to Iranians as a precautionary measure. On February 20, the government closed the border with Iran for a three-day period and suspended all flights to Iran. On March 8, the Iraqi government indefinitely closed its border to Iran and later barred Iraqi citizens living in Iran from returning home.

The outbreak in Iraq spurred popular discontent against Iran. Anti-government protesters who opposed Iranian meddling in their country also blamed Iran for the spread of the virus. The main protest camp in Baghdad suspended its activities to comply with health and safety guidelines, however, some protesters ignored orders to disband. Footage of activists disinfecting streets and distributing gloves circulated online.

The closed land border put Iran’s economy under further strain. Iran exports foodstuffs and construction products to Iraq which it can produce and sell cheaper than Iraq can. But the outbreak caused Iraqis to reject Iranian products. Cities in southern Iraq turned back trucks carrying Iranian foodstuffs, while border patrols stopped Iranian-backed militia fighters bringing empty trucks back into Iran. In mid-April, Iran pressured Iraqi officials to reopen the border but were rebuffed. 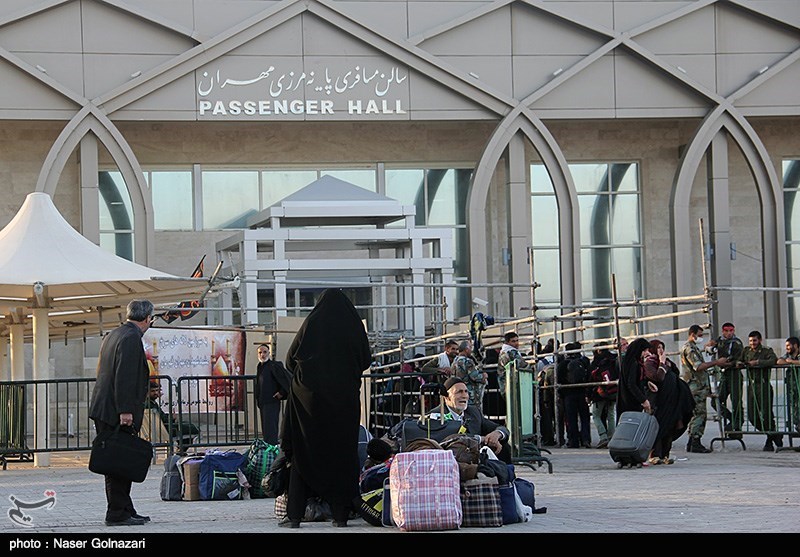 On March 23, Syria confirmed its first case of the coronavirus in a 20-year-old woman who had traveled abroad. The government closed schools and businesses to curb the spread of the virus. It also ended public transportation service between provinces, closed its land border crossing with Lebanon, and even suspended military conscription. But Syria did not immediately halt all flights from Tehran to Damascus, nor did it seal its border with Iraq, a key land crossing for Iranian-backed militias.

Tehran’s close ties with the Assad regime and its military presence in Syria made the country especially vulnerable to an outbreak. Thousands of Shiite pilgrims visited the Sayeda Zeinab shrine in the Damascus suburbs until Syrian authorities shut public access on April 2. Iranian-backed militias continued to enter the country through the al Bukamal border crossing with Iraq. Syrian opposition websites claimed that more than 100 militia fighters and members of Iran’s Islamic Revolutionary Guard Corps in al Bukamal had contracted the virus and been hospitalized. The Fatemiyoun Brigade, a pro-Iran militia composed of Afghan fighters, tweeted images of its fighters within Syria manufacturing “several thousand” masks per day.

But the coronavirus may have also limited Iran’s operations in Syria. On March 16, the Israeli Defense Force said that it had noted a decrease in military activity by Iranian military advisors and militia forces in Syria due to the coronavirus. Defectors from the Syrian military claimed that senior officials had been instructed not to interact with Iranian-backed militia fighters and advisors.

The Syrian opposition accused the governments of downplaying the outbreak to avoid taking steps to block Iranian access. Online activists tweeted videos that purported to show hospitals with packed quarantine rooms and health workers wearing protective masks. The London-based Syrian Observatory for Human Rights said that Syrian doctors had been instructed not to disclose confirmed cases. The Syrian government denied all allegations it had covered up the full extent of the viral spread.

Iranian Shiite pilgrims at the Sayeda Zeinab shrine near Damascus