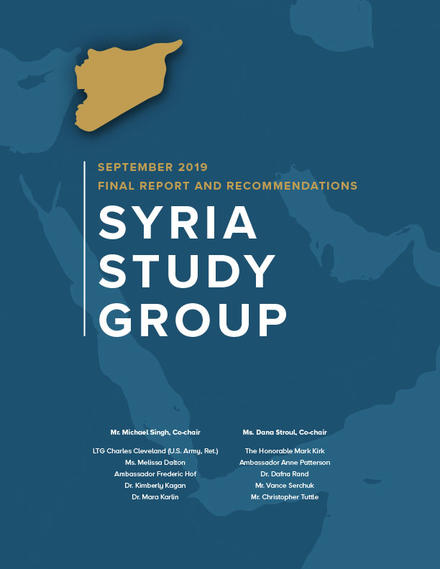 Iran’s critical assistance to the Assad regime has given it wide latitude to entrench itself on Syrian territory, according to new report by the Syria Study Group. Tehran is working to introduce advanced weapons systems that could threaten Israel and to establish a foothold in the eastern Mediterranean. “Iran is pursuing a two-track policy of military entrenchment and economic and political expansion that is designed to ensure a permanent presence and influence in Syria.”

The Syria Study Group was established by Congress with the purpose of examining and making recommendations on the military and diplomatic strategy of the United States with respect to the conflict in Syria. The U.S. Institute of Peace was mandated by Congress to facilitate the group. The following are excerpts from the report on Iran’s presence in Syria.

Over the course of the Syrian war, Iran’s deployment of its own forces and proxy militias recruited from other countries has been decisive in the Assad regime’s reversal of territorial losses to the Syrian opposition. As a result, Iran now has wide latitude to pursue its own geopolitical agenda on Syrian territory, including the introduction of sophisticated weapons systems that will enable Iran to open a new front against Israel and threaten freedom of navigation in the eastern Mediterranean. Should Iran ever acquire nuclear weapons, Israel worries it could find itself facing a predicament not unlike that confronting South Korea: threatened by a foe with both a massive conventional arsenal and a nuclear capability that could deter outside partners such as the United States from coming to its aid in the event of conflict.
An overt war between Iran and Israel is just one of the secondary conflicts that could be spawned by the conflict in Syria. The threat to Israel posed by Iran in Syrian territory has motivated Israeli leaders to seek accommodation with Russia. Jordan and Lebanon are likewise now courting closer relations with Moscow, worried by Iran’s presence, by growing instability in Syria’s southwest, and by increasing uncertainty over U.S. policy.

ASSESSMENT OF THE CURRENT SITUATION IN SYRIA

Despite Israeli air strikes and U.S. sanctions, Iran continues to entrench itself in Syria. Syria is Iran’s only state ally and key to Tehran’s purported “forward defense” strategy. Iran is pursuing a two-track policy of military entrenchment and economic and political expansion that is designed to ensure a permanent presence and influence in Syria. For Iran, Syria is a theater for the projection of power and influence in the Middle East, a land bridge to the Levant and Mediterranean, and a third front—in addition to Lebanon and Gaza—against Israel.

Iran intervened early in the Syrian conflict. In 2012, it reinforced Assad’s troops with members of the Quds Force of the Islamic Revolutionary Guard Corps; Shia recruits from Afghanistan and Pakistan; Iraqi Shia militia members; and fighters from Lebanese Hezbollah. Along with Russia, which intervened in September 2015, providing the regime with critical air power, Iran was instrumental first in reversing the momentum of anti-Assad armed opposition groups and then in helping the regime begin to recapture lost territory.

Iran’s military entrenchment in Syria takes at least three forms: the introduction of advanced weapon systems; the establishment of military command centers, often within existing regime bases; and the insertion of troops. Iran supplies the regime with a wide range of munitions, including short-range ballistic missiles, drones, and antitank missiles. In addition to its own weapons systems in Syria, which remain under Iranian command, Iran also continues to attempt to transfer sophisticated weaponry, including precision guided missiles, to Hezbollah. Iranian forces are present, according to one estimate, at nearly forty locations in the country. The Iranian troop presence peaked in 2015 and has since tapered off. Recent estimates suggest that the number of Iranian military personnel in Syria ranges from the “high hundreds to the low thousands.” The total number of Hezbollah and Shia militia fighters in Syria ranges from ten thousand to twenty thousand.

Israeli airstrikes have constrained, but not deterred, Iranian actions in Syria. To date, Israel has largely targeted weapons systems and military infrastructure, not leadership or other personnel. Israeli officials believe, however, that absent their air campaign, Iran would have assembled a much larger force in Syria. Israel’s objectives are to push Iranian forces away from Israel’s border and prevent Iran from positioning in Syria weapons systems that threaten Israel. From within Syria, Iran or its proxies have targeted Israel on a number of occasions, both with drones and with missiles. Israeli security officials worry that Hezbollah will continue to entrench itself on the Israel-Syria border in the manner it has on the Israel-Lebanon border, heightening the threat of infiltration along that frontier and requiring Israel to increase the defense resources it devotes to monitoring and patrolling it.

Iran is complementing its military strategy with an economic, political, and social campaign focused on securing long-term influence in Syria comparable to what it has in Iraq. Iranian efforts vary across the country. In southern and, increasingly, in eastern Syria, Iran courts local tribes by providing stipends or jobs. Iranian-funded Shia religious centers provide social, religious, and economic programs in impoverished areas. The Iranian Cultural Center in the regime sector of Deir ez-Zor offers scholarships for Syrians to study in Iran and is enrolling students in Farsi courses. Iran has also opened up at least three schools in the Deir ez-Zor countryside near the Iraqi border that are staffed by Iranian teachers. The schools have enrolled over 250 children, each of whom receives a small stipend to attend.

In Damascus and surrounding suburbs, both Hezbollah and Iran are purchasing residential and commercial properties in an attempt to establish a base similar to Hezbollah’s stronghold in southern Beirut. Several universities, under regime directives, now offer courses in Farsi.

There are limits, however, to the extent to which Iran can penetrate Syrian society. Syria has only a small Shia population, and many Syrians reportedly have an antipathy toward Iran. Even members of Assad’s own Alawite sect—an offshoot of Shia Islam—resent the regime’s readiness to prioritize Iranian interests over Syrian concerns, such as seeking the release of Shia militiamen first in prisoner exchanges. Yet Iran will continue its efforts to insert its proxies to fill gaps in services and security in regime-controlled areas.

Iran and Russia maintain an alliance of convenience in Syria, and their commitment to preserving their client Assad is stronger than any disagreement. Tensions may emerge periodically between the two, but there is so far no sign that either will allow tactical or operational differences to undermine their shared short-term goal of regime survival. Iran’s partnership with Russia has furthermore allowed it to escape any UN Security Council censure for its actions in Syria.