Since May 2019, the United States has added at least 14,000 more troops to the Middle East in response to tensions with Iran. As of March 2020, there were between 60,000 to 80,000 U.S. troops deployed in and around the Persian Gulf. This number includes forces positioned in Afghanistan, Iraq, and Gulf countries. In terms of military hardware, the Pentagon sent additional Patriot missile batteries, B-52 bombers, and F-35 fighter aircraft to Saudi Arabia, Qatar, and the United Arab Emirates in early 2019.

The U.S. surged military capabilities to countries targeted by Iran and its proxies. The Pentagon sent one Terminal High Altitude Area Defense (THAAD) system after Iran attacked the Abqaiq oil facility in Saudi Arabia in September 2019. In January 2020, the U.S. deployed 3,500 troops to Kuwait after the assassination of Qods Force Commander Qassem Soleimani in anticipation of a retaliatory strike. By March 2020, the U.S. had deployed counter rocket, artillery and mortar systems to Iraq and was in the process of setting up Patriot missile batteries.

But changes in the regional threat picture has also seen the U.S. redeploy or reduce its military footprint in certain theaters. U.S. forces began their withdrawal from Afghanistan in March 2020 as part of an agreement with the Taliban to move forward with intra-Afghan peace talks. The same month, American defense officials announced plans to redeploy troops from three Iraqi bases and removed nearly all of the 3,500 troops sent in January 2020.

The following are best estimates of U.S. forces positioned in the region drawn from publicly available sources. U.S. Central Command (CENTCOM) did not confirm the “disposition or the capabilities of U.S. forces in the region” due to “concerns related to operational security and force protection.”

“We do not seek conflict, however, U.S. Central Command remains postured and prepared with forces that span a full range of capabilities in order to protect our partners, personnel and assets in the region,” said CENTCOM spokesman Army Maj. John Rigsbee. “USCENTCOM is also prepared to promote maritime stability, ensure safe passage, and enhance freedom of navigation throughout key waterways in our area of responsibility.”

Breakdown of troops/assets by country: 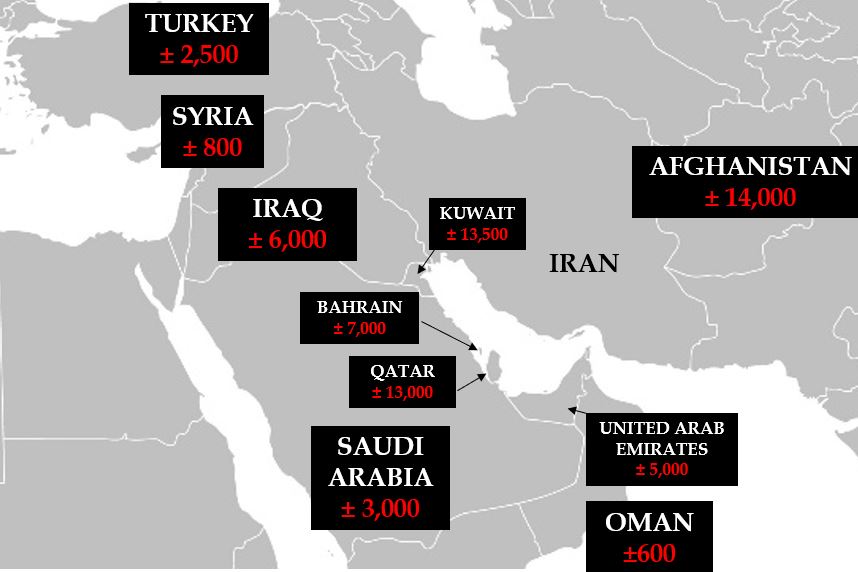 Andrew Hanna, a research assistant at the U.S. Institute of Peace, contributed to this report.