Last month, Israel unveiled the latest weapon in its high-tech arsenal: @IDFFarsi. The Farsi-language Twitter account expands the considerable social media reach of the Israeli Defense Forces (IDF) – already operating in Hebrew, English, Spanish, and French – into yet another linguistic domain. The IDF said the account, along with counterparts on Instagram and Telegram, would allow Iranians “to see for themselves that they are not the enemy, the oppressive Iranian regime is.” 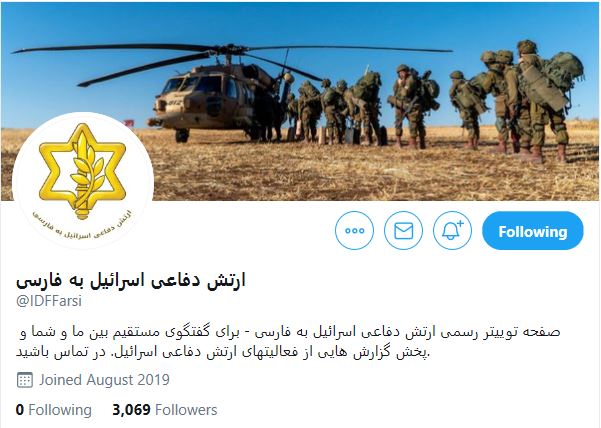 The new online efforts come as Israel ramps up its military activities against Iranian proxies across the region. After striking targets in Iraq and Syria, Israel expanded its campaign into Lebanon on August 25, using an explosive drone to damage what it claimed were components for Hezbollah’s precision-guided missiles. When Secretary-General Hassan Nasrallah denied the group had any precision-guided missile factories, the IDF published photos of the alleged factory on its English and Farsi accounts. 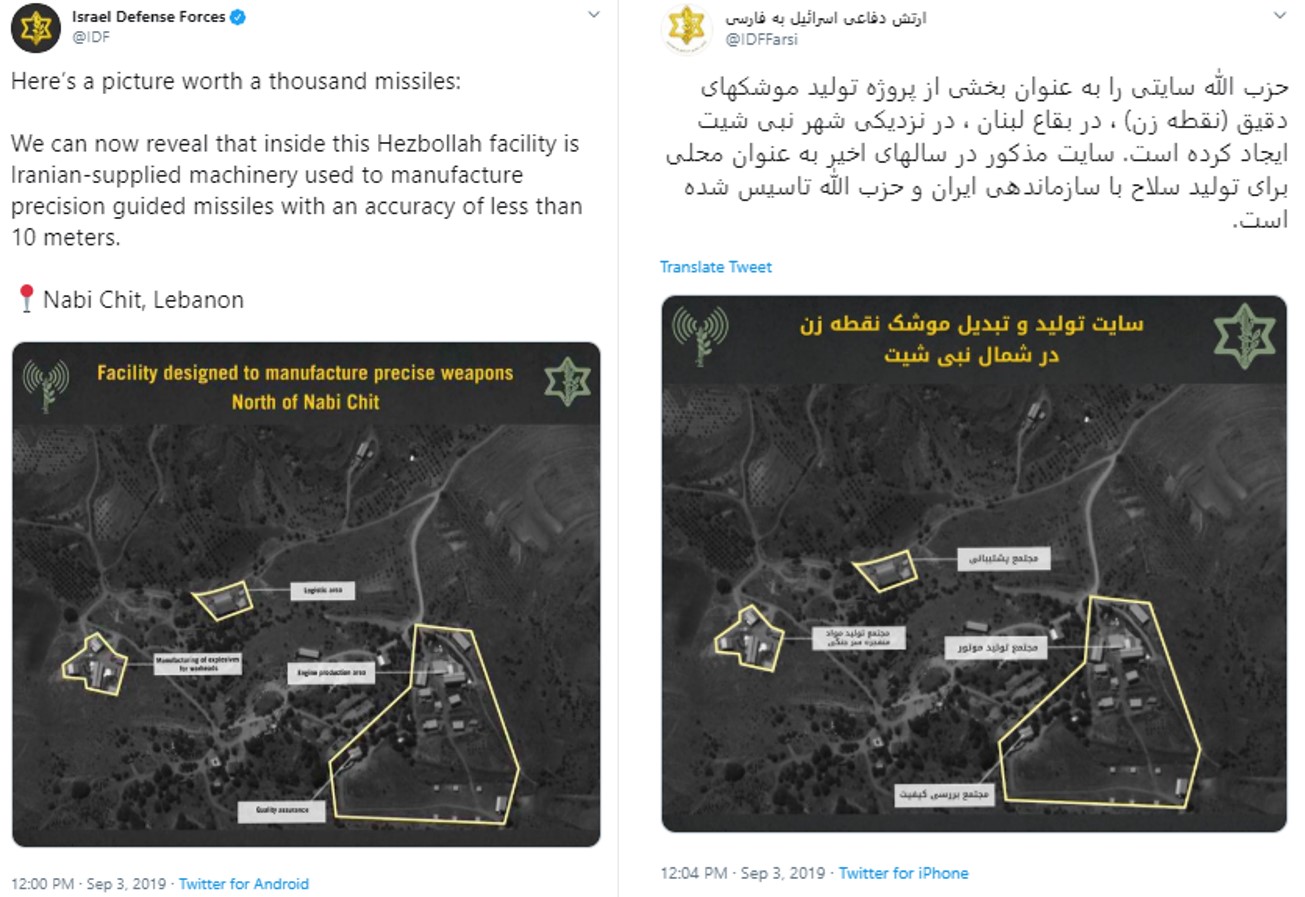 Although @IDFFarsi uses similar graphics and images to its English counterpart, it does not share identical text. On August 29, @IDFFarsi tweeted the identities of Qods Forces commanders that it said would “endanger” Lebanon. The corresponding English tweet also reveals the identities of the commanders but focuses on Hezbollah’s intent to attack Israel. 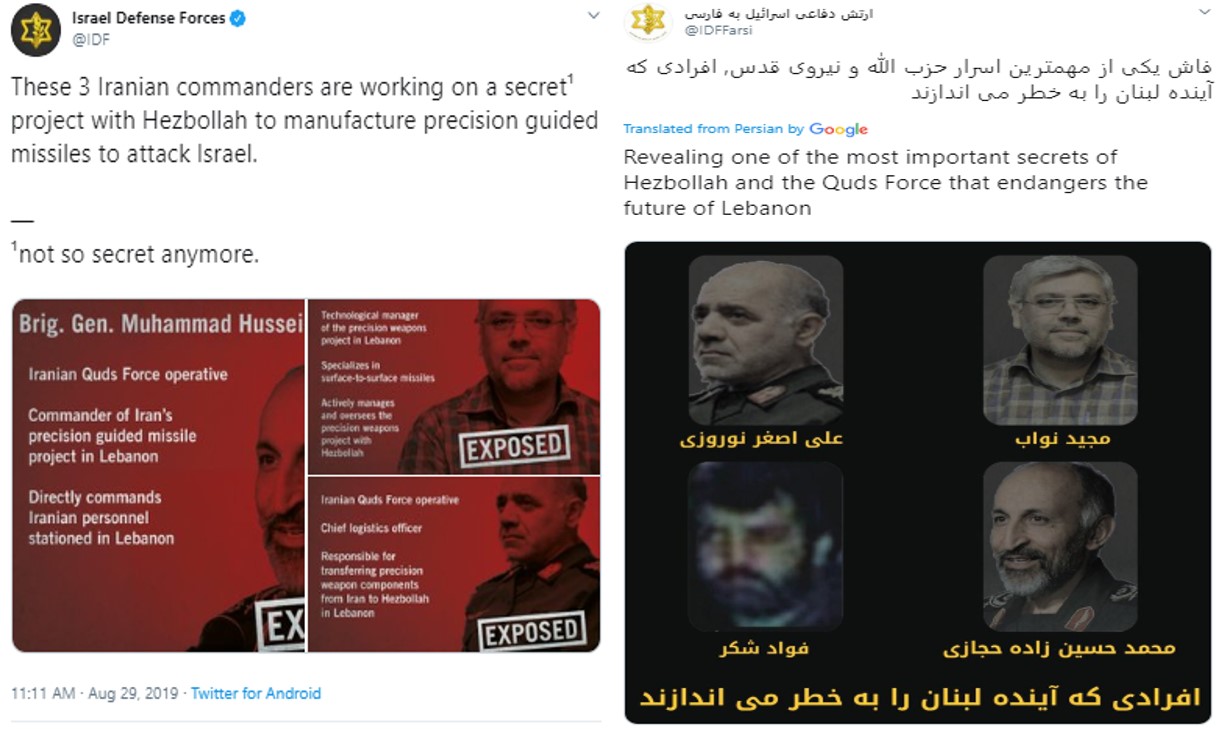 Similarly, a September 2 tweet in Farsi calls on Lebanon and the U.N. Interim Force in Lebanon (UNIFIL) to stop the “Iran and Hezbollah project,” while the English tweet instead calls attention to Hezbollah’s recent attack on an Israeli military ambulance near the border. 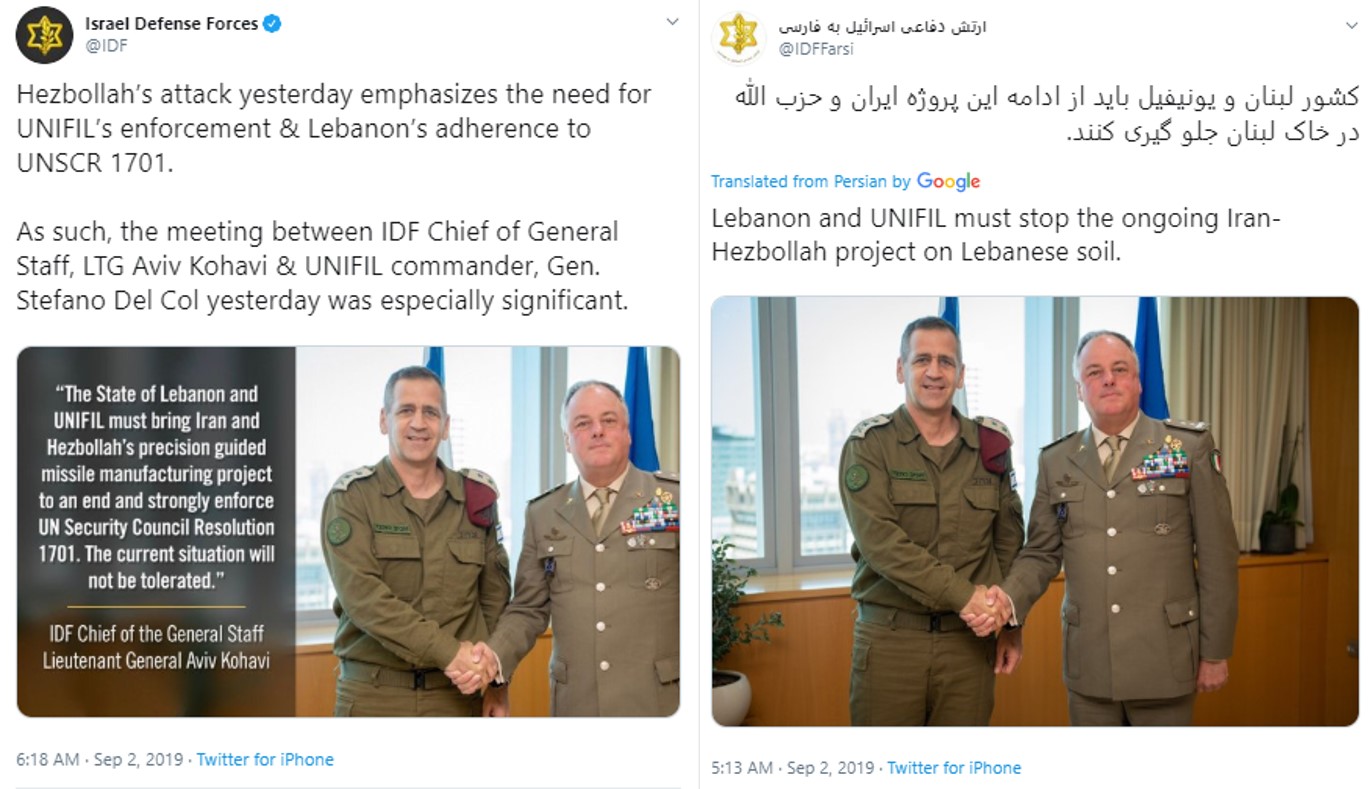 Rather than duplicate efforts, the IDF is tailoring its message for specific audiences. Tweets from the English account highlight the danger Iran poses to Israel for a Western audience, while tweets from the Farsi account appear to be psychological warfare directed against Iranian commanders and their proxies. 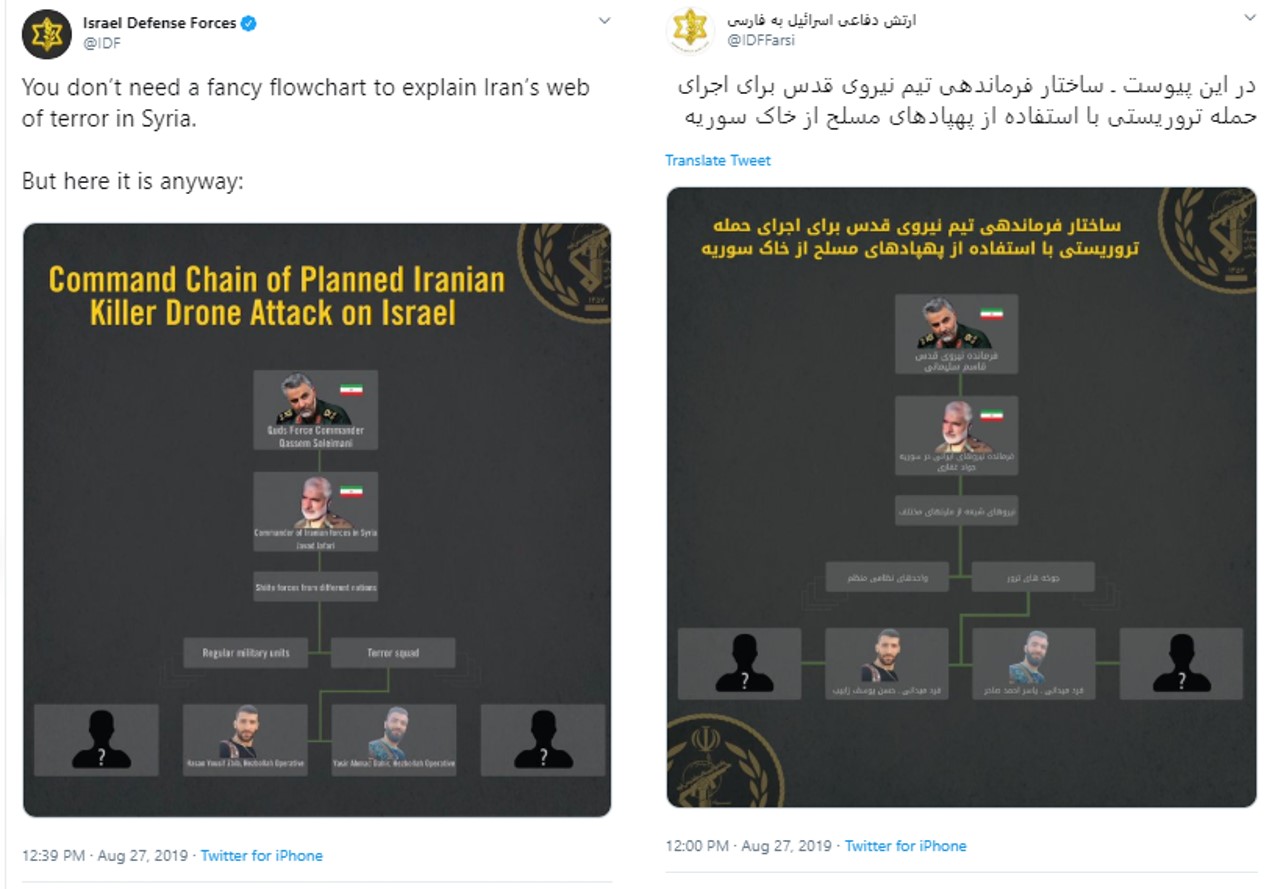 And unlike the English account, the Farsi account will comment on domestic Iranian affairs. On September 11, @IDFFarsi posted a cartoon commemorating an Iranian football fan arrested for trying to enter a football stadium disguised as a man. The so-called “blue girl” set herself on fire and died before she could be convicted. On the same day, the English account instead posted a graphic commemorating the anniversary of the 9/11 terrorist attacks. 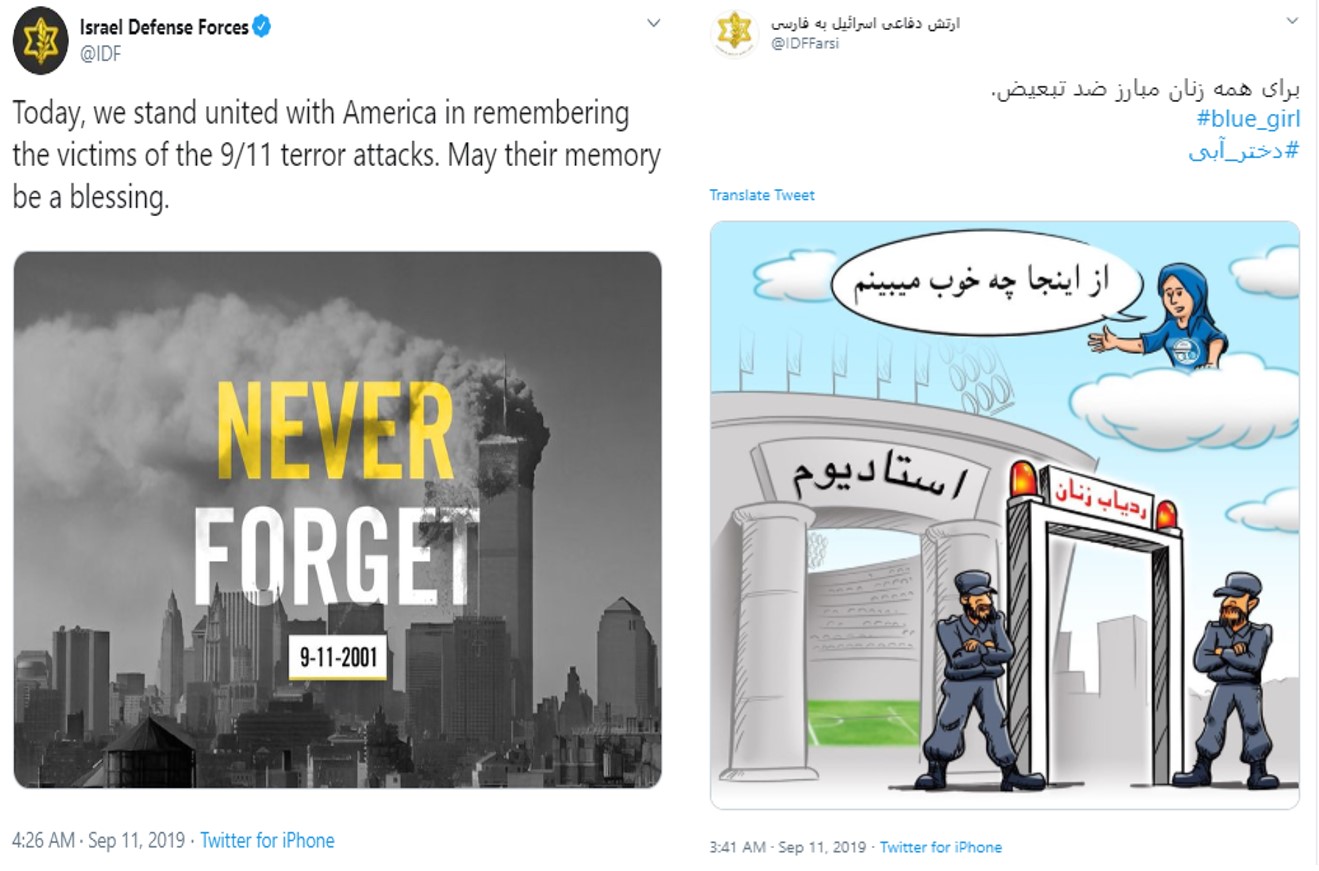 Andrew Hanna, a research assistant at the U.S. Institute of Peace, contributed to this roundup.