Iranian newspapers, which reflect a broad spectrum of political views, provided diverse coverage about the prospects of talks between President Hassan Rouhani and President Donald Trump. For months, French President Emmanuel Macron has engaged in behind-the-scenes diplomacy to defuse escalating tensions between Tehran and Washington. On the sidelines of the G-7 summit in Biarritz, he held separate talks with Trump and Iranian Foreign Minister Mohammad Javad Zarif. On Aug 26, in a joint press conference with Trump, Macron said he hoped for direct talks between the two presidents—which would be the first since the 1979 revolution—"in the coming weeks.”

“An agreement can be met. We know the terms, we know the objectives, but we have to just now sit around the table and make that happen,” Macron told reporters. Trump predicted a “really good chance” that he would meet Rouhani. Trump has repeatedly said he wants a meeting to broker a deal with Iran that goes beyond the 2015 nuclear agreement brokered by the world’s six major powers.

“I think Iran wants to get this situation straightened out,” Trump said. U.S. terms are “no nuclear weapons, no ballistic missiles, and a longer period of time” on so-called sunset clauses on Iran’s nuclear program. “Very simple. We can have it done in a very short period of time.” The following is a rundown of headlines and frontpages from a range of Iranian papers.

Rouhani: I Won’t Spare Meeting Anyone 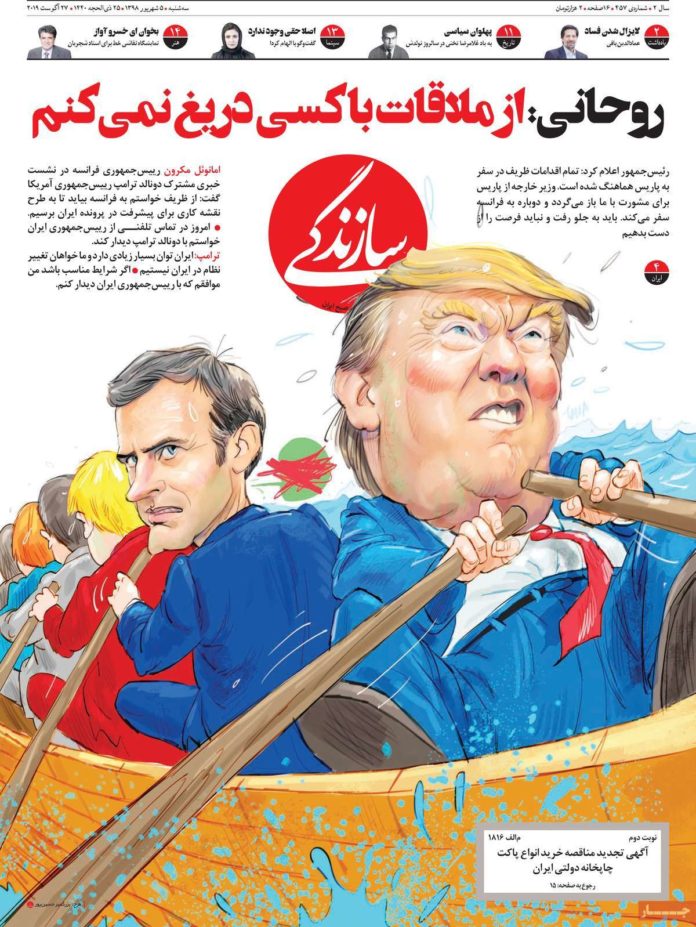 Macron: Iranian, U.S. Presidents May Meet in Next Weeks 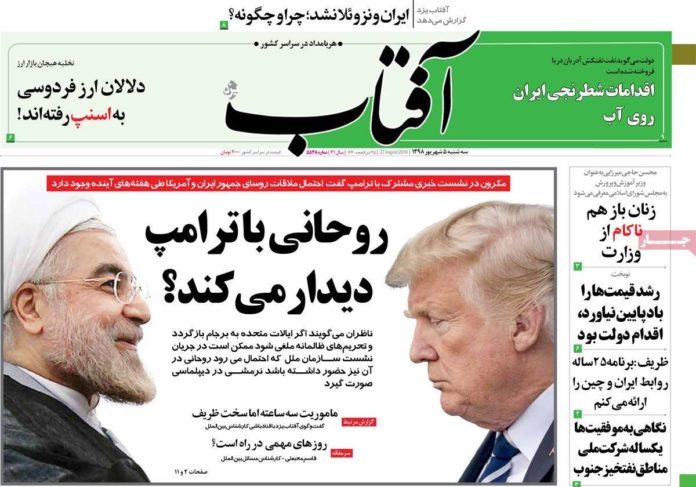 Trump Says Won’t Give Iran Anything, but Rouhani Hears It as Meeting for Development! 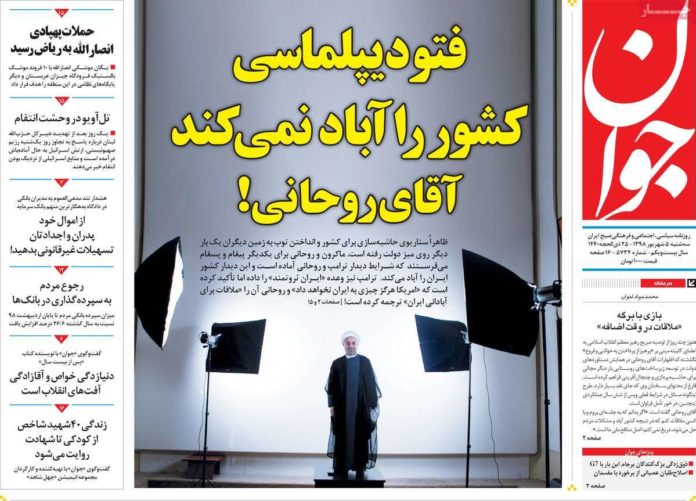 Trump and Macron’s Insult the Result of Passive Diplomacy

Iran to Increase Stockpiles of Enriched Uranium to 50 Tons 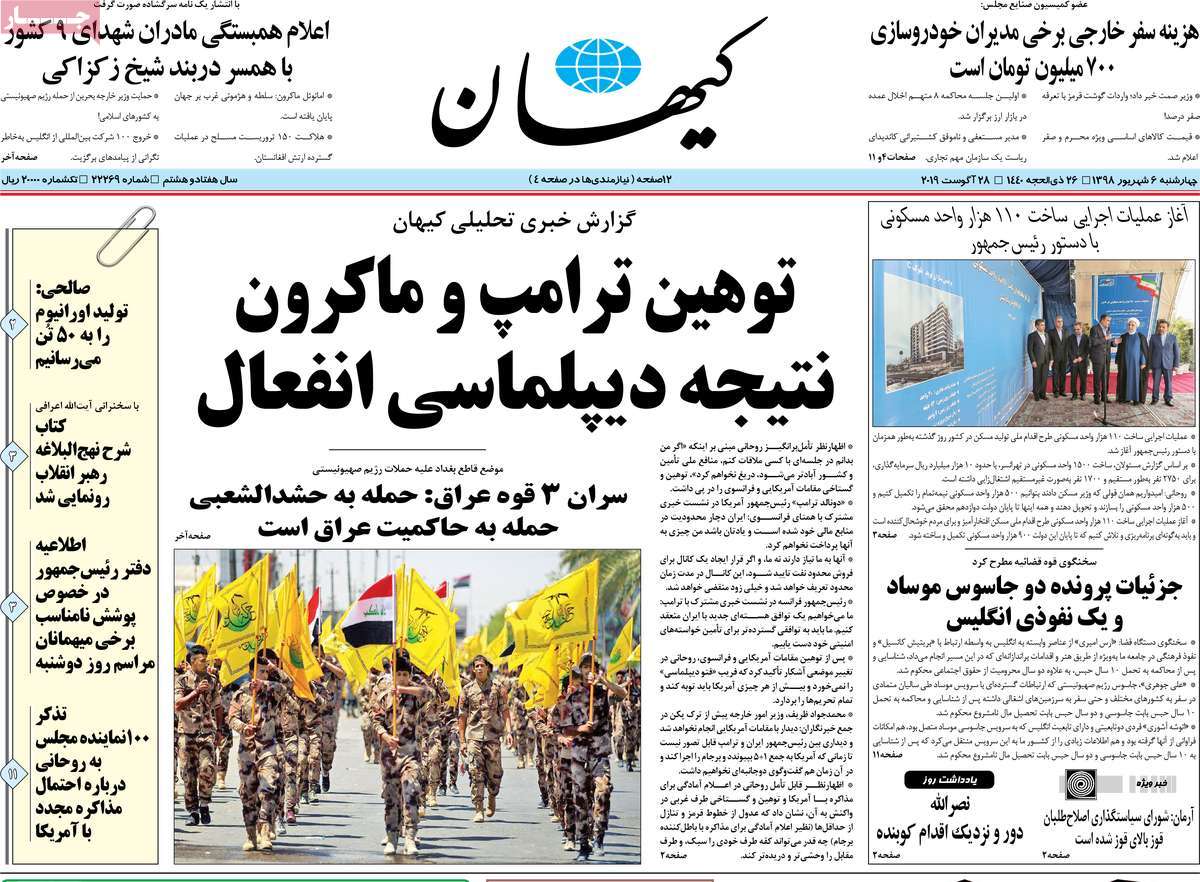 Rouhani Elaborates on Iran’s Policy on Talks with US

We Seek to Solve Problems through Rational Procedures; Not Taking Pictures

Without End of Sanctions and Hostile Relations, There Won’t Be Evolution in US-Iran Relations 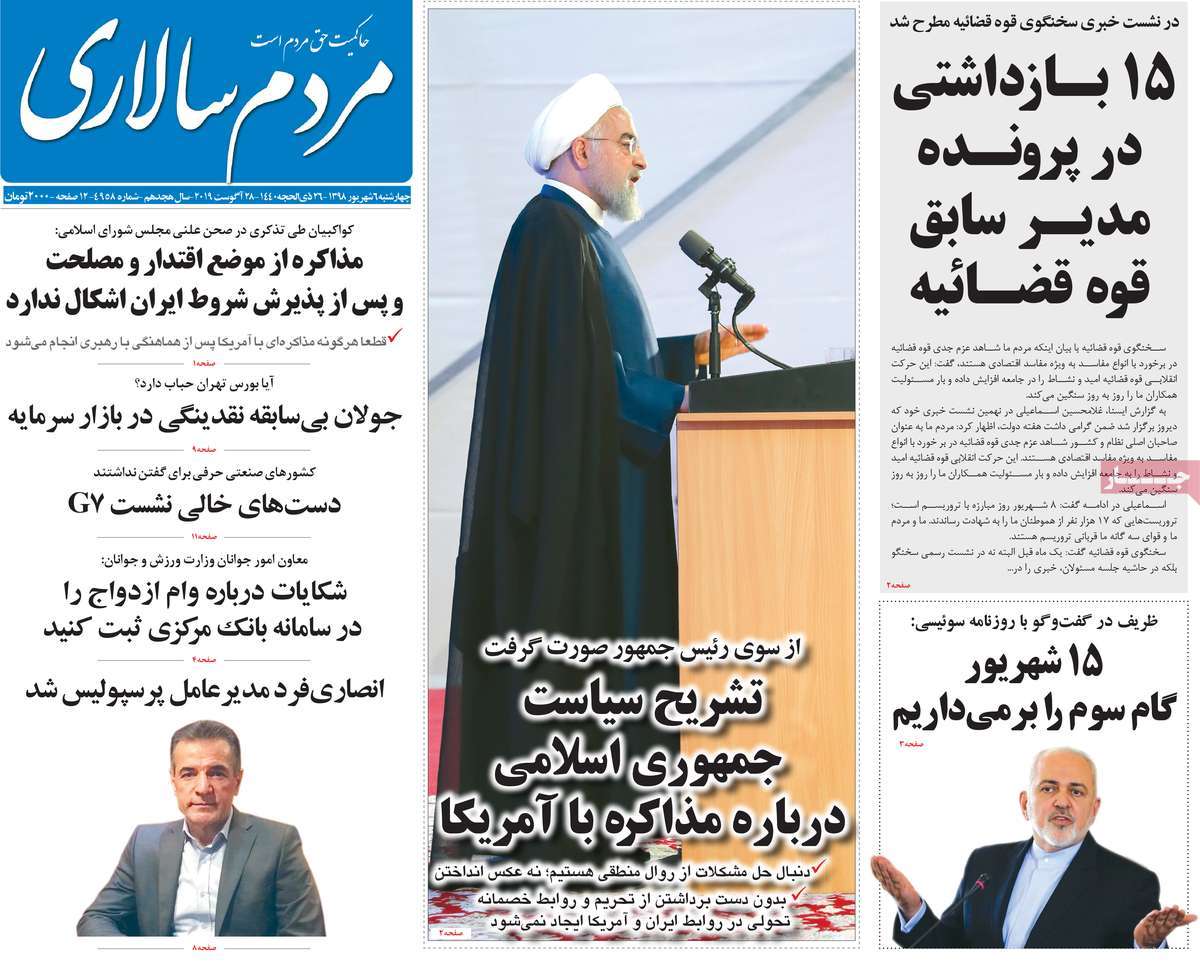 Return to Diplomacy: Trump Backs Off Under Influence of Macron, Iran’s Resistance 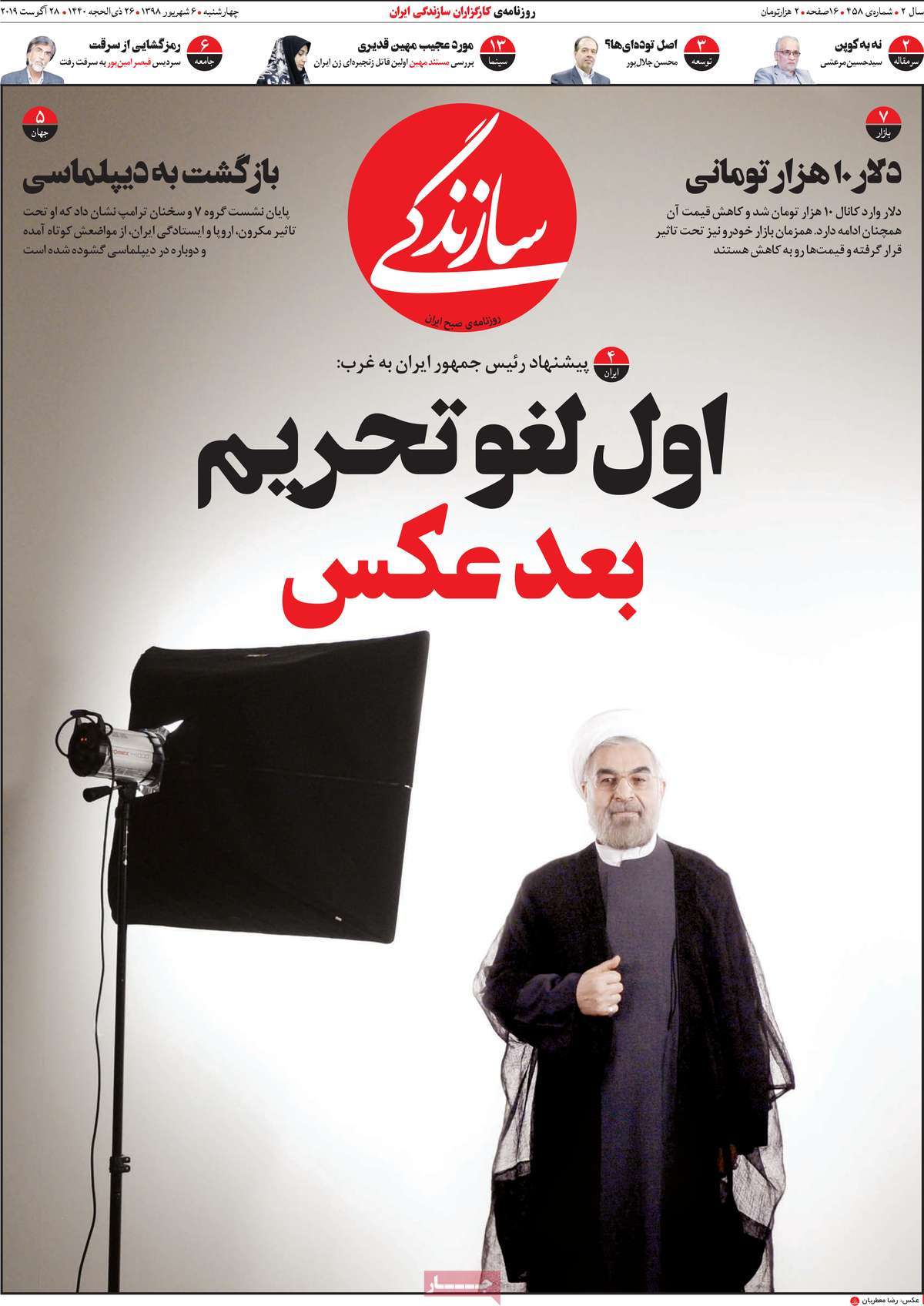 Storm Against the Government: The Principlists attack Rouhani over his remarks about negotiations 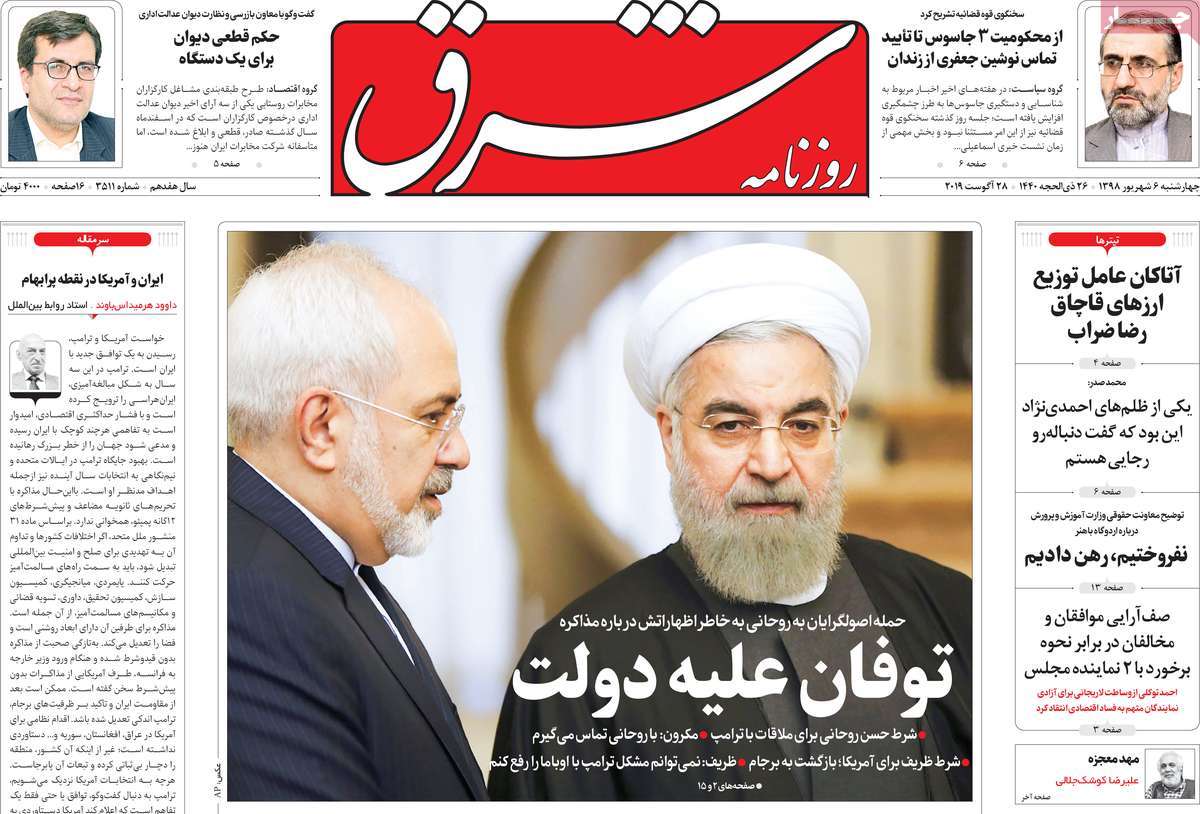 Reza H. Akbari provided the translation. He is a doctoral candidate at American University and a program manager at the Institute for War & Peace Reporting. Follow him @rezahakbari.