Tehran has new colors—and a new un-revolutionary whimsy. The sprawling Iranian capital, long famed for its anti-American graffiti and grim billboards of war martyrs, is now adorned with huge surreal murals in bright hues that have transformed drab cement-and-steel high-rises. Some corners of the Islamic Republic even look festive. 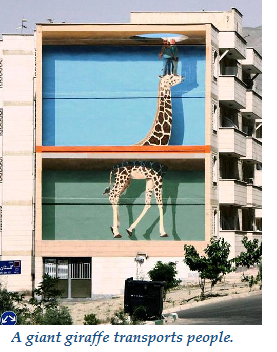 The dream-scapes are playful: A giant giraffe, with two men balanced on his head, saunters along the side of a four-story apartment block. Painted people seem to be walking along an illusory nature trail that bisects a big office building. Cars are driving in the sky in another high-rise illusion; a child appears to be riding his bike down the side of a third. A fourth building has been turned into a huge aquarium, with human-size goldfish wiggling along the sides.
More than 100 of the new murals are the work of Mehdi Ghadyanloo, a 34-year-old Iranian who leads a team of young artists in the Blue Sky Painting Company. Most are friends, former university classmates, or current students. With whimsy and humor, his works are altering the atmospherics in Tehran, a city of more than eight million better known for its horrendous traffic and smothering smog. 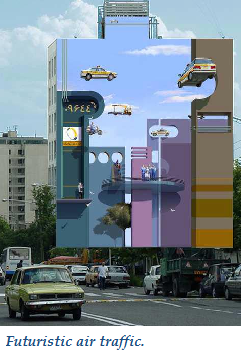 The son of a farmer and a carpet weaver, Ghadyanloo grew up amid both earth tones and brilliant colors that inspired him to paint as a boy. As a student, he was inspired by the minimalist work of Japanese architect Tadao Ando and the detailed graphics of Dutch artist M.C. Escher. Now, he is captivated by Banksy, the pseudonym of a British graffiti artist who has left paintings — anonymously — on buildings, billboards, bridges and fences around the world.
“I really like his work,” Ghadyanloo said in an interview. “I wish I could be the second Banksy.”
Graffiti is illegal in Iran; spray-painted slogans are quickly removed. The city instead has an arts commission that must approve public murals. More than 100 of Ghadyanloo’s proposals have been rejected, he said. But given the city’s past penchant for revolutionary art, his portals into imaginary worlds are strikingly different. 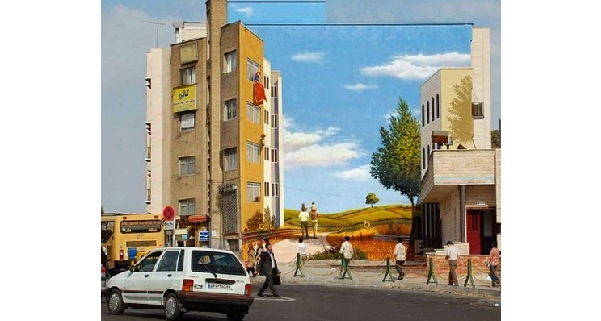 An illusory nature trail painted on the side of a building.
Most of Ghadyanloo’s inspirations come at night. “I have surreal visions when I sleep,” he said. “Now, I translate my dreams onto walls.” 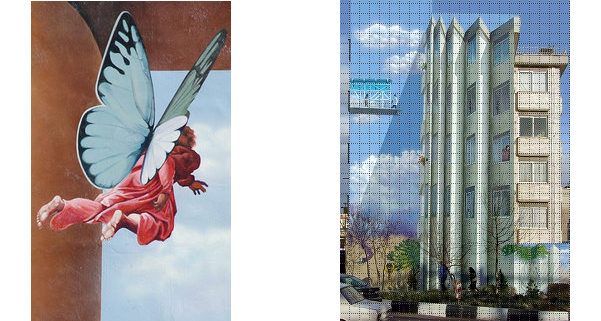 A human butterfly (left) and a folding building (right).
Additional works by Ghadyanloo and his team are accessible on the website https://www.behance.net/ghadyy and his Facebook page in English. 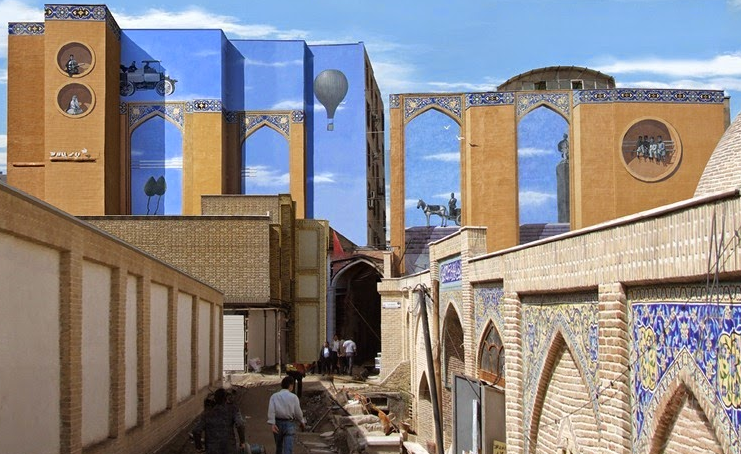 Photo credits: Courtesy of Mehdi Ghadyanloo via Facebook and Behance.net