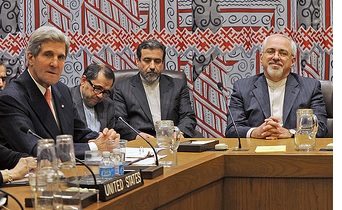 In an all-time first for Iranian diplomacy, new Foreign Minister Mohammed Javad Zarif has been chronicling his visit to New York on his Facebook page for Iranians back home. On September 26, Secretary of State John Kerry and Zarif held their first meeting on the sideline of talks between Iran and the world’s six major powers. President Obama spoke with President Hassan Rouhani on the phone the following day, marking the first direct communication between U.S. and Iranian heads of state since the 1979 revolution.

Zarif’s reflections on these historic events and his busy schedule have generated more than 350,000 “likes” on his Facebook page. The following are Zarif's most recent entries, translated by USIP’s Maral Noori.
September 29
Hello friends,
It is 5 a.m. on Sunday in New York and 1:30 p.m. in dear Iran. I, your servant, and my colleagues from the Ministry of Foreign Affairs are still in New York. I will continue to have bilateral meetings with foreign ministers, give interviews and have sideline meetings until Thursday. Then we will return to Tehran.
I began writing the last report for you all at 5:15 a.m. on Friday [September 27] because it was not yet the time for morning prayers. I wrote part of the report before prayers and the rest after prayers. Then I looked at some of your sweet messages that I swear would resolve any difficulty and cure fatigue.
I ate breakfast with the president of the republic and around 8:30 a.m. I prepared for the meeting of the Foreign Ministers of the Non-Aligned Movement (NAM), which I chaired, and went to the U.N. headquarters.
The session began at 9:15 a.m. with speeches by the president of the republic [Hassan Rouhani], the U.N. Secretary General and the General Assembly president. It lasted until 1:30 p.m. About 30 ministers and senior representatives of the member states spoke about the rule of law in international relations.

Chairing such a session is tedious because, as chairman, you do not have a lot of work to do. For four and a half hours, he or she must sit above the others, listen politely, thank one speaker, and announce the next speaker’s turn. Of course, when an international session reaches decision-making time, the chairman is challenged. I had such sweet experiences in the recent and distant past. Now, however, the chairmanship is sort of a ritual that I am not keen on, but there was no choice.
After returning to the hotel to say goodbye to Dr. Rouhani and his delegation, I found out that Mr. Obama wanted to make a phone call. U.S. authorities had been requesting a meeting between the two presidents since the beginning of the week. It did not happen for various reasons. [But] informal contact between the parties more or less continued. A meeting between me, your servant, and Mr. [John] Kerry was held on the sidelines of the P5+1 [world’s six major powers] session. After informal communications continued, it became clear that the two presidents might be able to speak to one another over the phone. While I was administering the NAM session, five or six more Americans reached out until they managed to set up the phone conversation. Finally, the conversation was held as Dr. Rouhani was on the verge of leaving the hotel. They emphasized political will on both sides to resolve the nuclear issue as quickly as possible and stressed orders to Mr. Kerry and myself, your servant, to reach a quick solution with political will to resolve the nuclear issue from both sides. The conversation was respectful and positive, and hopefully a good start for the difficult work that requires everyone’s support, and people to wait, trust brokers, and avoid quick, partisan judgments and…
I don’t know why some in Tehran see this trip and this conversation as a thorn in the eyes of malice for Iran, Islam and the Revolution or why they question these actions as ill-considered. Nevertheless, as Hafez [a 14th-century poet] stated (see below): 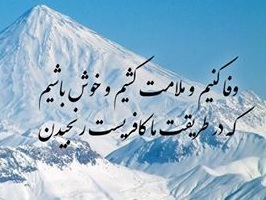