Iranian suspicion about the United States has been splashed across billboards and spray-painted on public walls ever since the 1979 revolution. But anti-American art has actually now become a source of dispute within Iran’s government—and maybe a sign of changing times.
Shortly after new diplomatic talks between Iran and six world powers, a new set of billboards challenging American honesty popped up across Tehran. They depicted an American envoy negotiating with an Iranian official, but under the table the American was clad in fatigues and cradled a shotgun pointed at the Iranian. The caption, in Farsi, read “American honesty.”
Media supportive of new President Hassan Rouhani publicly blasted the series of billboards. They then just as abruptly disappeared from Tehran’s streets in late October.

The local government claimed the billboards, reportedly put up by the Owj Cultural Organization, were unauthorized. “In an arbitrary move, without the knowledge or confirmation of the municipality, one of the cultural institutes installed advertising billboards,” said Tehran city spokesman Hadi Ayyazi.
But hardliners pledged to put them back up during the holy month of Ashura, which starts in mid-November. Hardline media charged the Rouhani government had pressured the city to remove them for fear of hurting Iran’s new diplomatic initiative. “With this ridiculous excuse, they put so much pressure on the city that they were forced to remove the posters,” Kayhan claimed in an editorial.
Yet anti-American artwork is still a mainstay on official websites, most notably the new graphics still posted weekly on Supreme Leader Ayatollah Ali Khamenei’s Facebook and Twitter accounts. The most recent one, below, was posted on October 26. 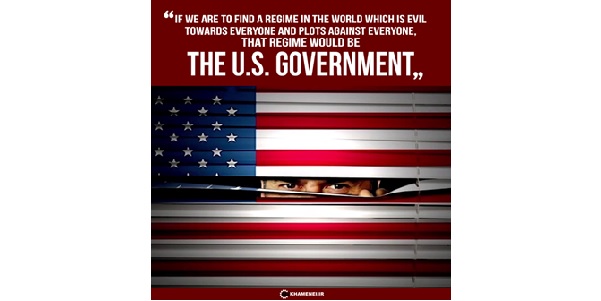 This poster (below) on Khamenei’s Facebook page refers to the 1953 coup led by the CIA and British intelligence against Iran’s first democratically elected government. The coup also restored the shah to the throne six days after he had fled to Rome. The Facebook posting includes a past quote by Khamenei:
“The U.S. government, with the claim of democracy, has made so many crimes against democracies in the world. It’s about the regime that staged [the] 1953 coupin Iran and led the Chilean coup against the legitimate government ofthat country. Dozens of coups have been conducted in Latin America, Africa and other regions against national governments and for many years U.S. administrations have backed dictators such as "Reza Pahlavi" and even today if a dictator is not more ugly-tempered than they are… No one would believe [the] U.S. government’s claims fordemocracyand human rights."

The theocracy clearly still fears American domination, a theme as central to the 1979 revolution as the campaign to oust the monarchy.

Another posted on the supreme leader’s page marked the shooting down of an Iranian passenger flight by the USS Vincennes in 1988 on the 25th anniversary. The flight carried 290 passengers and crew; all fell to their deaths. The Reagan administration said it was an accident, but Iranians still note that the American captain was awarded a medal.