In 2021, Iran executed at least 314 people – more than any other country except China – according to Amnesty International’s annual report on the death penalty. The increase was linked to death sentences for drug-related offenses. Executions “routinely followed grossly unfair trials, with ‘confessions’ obtained under torture often used by courts as evidence,” the human rights monitoring group noted. “In several cases, the agony of both those executed and their families was compounded by the executions being carried out in secret, without prior notice to the person’s lawyer or family.” Members of the Ahwazi Arab, Baluchi and Kurdish ethnic minorities faced particularly harsh treatment. The following are key excerpts and graphics. 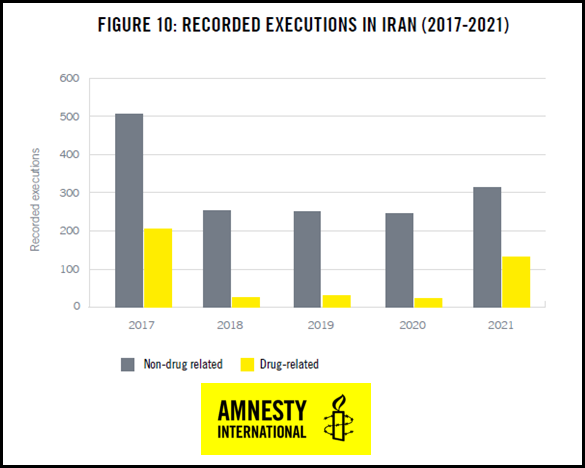 "In Iran, the number of executions recorded by Amnesty International rose by 28% compared to the previous year (from 246 to 314), largely due to an increase in executions for drug-related offences. Amnesty International believes the overall true figure to be higher because the Iranian authorities do not provide execution statistics, and relevant information about areas in Iran with large ethnic minority populations is often more challenging to access. The number of recorded executions for 2021 is the highest since 2017, reversing year-on-year declines since then. Recorded executions peaked in September – during that month alone, the Iranian authorities executed at least 48 people.

"Executions routinely followed grossly unfair trials, with “confessions” obtained under torture often used by courts as evidence. Death sentences were used disproportionately against members of ethnic minorities for vague charges such as “enmity against God” and as a tool of political repression. At least 19% of the recorded executions (61) were members of the Baluchi ethnic minority, whose share of Iran’s population overall is approximately 5%. The recorded number of women executed also rose significantly – from nine in 2020 to 14 in 2021. In addition, three youths, Sajad Sanjari, Arman Abdolali and Ali Akbar Mohammadi, who were children at the time of the crimes for which they had been convicted, were executed.

"Of the recorded executions, 159, or 51%, were for murder. Under Iran’s laws, the death penalty for murder is applied under the principle of qesas (retribution-in-kind). Once a person is convicted, the law grants to the family of the murder victim the power to either demand and carry out the execution, or grant pardon in exchange for diyah (“blood money”).

"The number of executions recorded for drug-related offences, 132, comprised 42% of the overall number, more than a five-fold rise from 2020 (23), despite amendments to the anti-narcotics law that came into effect in November 2017. The law still provides for a mandatory death penalty once courts convict a person of being in possession of specific amounts of drugs; the amount varies according to the type of drug.

"Iranian authorities executed members of the Ahwazi Arab, Baluchi and Kurdish ethnic minorities as part of the long-term, entrenched discrimination and repression of these minorities.

"In several cases, the agony of both those executed and their families was compounded by the executions being carried out in secret, without prior notice to the person’s lawyer or family, and without an opportunity for the family to say their last goodbyes. Following several secret executions, particularly of members of ethnic minority groups, the bodies of those executed were then buried in secret by prison authorities. Families were denied indefinitely the opportunity to bury their loved ones or even access to, or information about, their burial places, leaving family members as ongoing victims of their loved ones’ enforced disappearances. Among those executed in secret during the year was Sajad Sanjari, who had been arrested in 2010 as a 15-year-old, and hanged in Dizelabad prison in Kermanshah Province on 2 August, having been convicted of murdering a man he claimed was trying to rape him at the time.

"Iran continued to execute people who were under the age of 18 at the time of the crime, in clear violation of its obligations under international law. Under Iranian legislation, in cases of murder and certain other capital crimes, boys aged above 15 lunar years and girls aged above nine lunar years are treated as adults and can be sentenced to death. While international law prohibits the use of the death penalty against any persons who were under 18 at the time of the crime of which they have been convicted, Article 91 of Iran’s Islamic Penal Code only grants judges the discretion to replace the death penalty in such cases with an alternative sentence if they believe there are doubts about the individual’s “maturity” at the time of the crime."