Henry Rome is the deputy head of research at Eurasia Group.

Iran and Russia have had a contentious relationship going back almost four centuries, including the Qajar dynasty’s loss of territory to the Russian Empire in the 19th century and the Soviet Union’s brief occupation of Iran in the 20th century. But the two nations have also cooperated on shared interests since the Iranian revolution in 1979 and the fall of the Soviet Union in 1989. Both countries oppose the United States and the liberal international order and have worked together to support allies, including Syria’s Bashar al Assad. But Russia’s invasion of Ukraine has created new complications in the bilateral relationship.

What is the state of relations between Tehran and Moscow in 2022? How has Russia’s invasion of Ukraine changed their diplomatic relationship?

Relations between Iran and Russia are broadly positive, but the Ukraine war has exacerbated long-standing Iranian suspicions about Russian intentions. The Russian and Iranian presidents met twice in the first half of 2022, with a third meeting scheduled in mid-July, and the two countries have signed several agreements to strengthen ties. 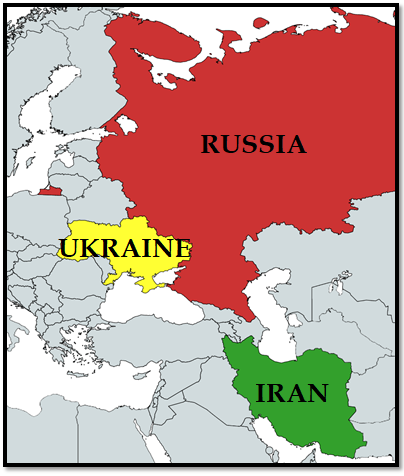 Iranian officials, including Supreme Leader Ayatollah Ali Khamenei, have called for an end to the Ukraine war but have echoed Moscow’s allegation that NATO and the United States were responsible for the conflict. Iran may support the Russian war effort with more than rhetoric. Tehran was “preparing to provide Russia with up to several hundred” unmanned aerial vehicles, the White House said in July.

The war has also changed Moscow’s approach toward the negotiations aimed at reviving the 2015 nuclear agreement. Russia had largely been a constructive player in diplomacy between Iran and the world’s six major powers, especially in ensuring that Tehran continued cooperating with international nuclear inspectors and in nudging the deal toward the finish line. But in March 2022, as negotiations appeared close to conclusion, Russia demanded assurances that Western sanctions on Russia—imposed over the Ukraine invasion—would not harm its trade, investment, and military cooperation with Iran. In effect, Moscow was holding the nuclear deal hostage to its disputes with the West. Moscow quickly retreated from this position, but the intervention appeared to disrupt diplomatic momentum.

In 2021, Iran and Russia were among the world’s top 10 producers of oil as well as natural gas. Do they cooperate or compete for global energy markets?

Iran and Russia have a history of tepid cooperation in developing Iran's energy sector. But Russia’s invasion of Ukraine and Western sanctions on Russian energy have shifted the relationship toward outright competition.

Iran and Russia used to export to different markets. Iranian oil exports have been almost entirely constrained to China due to U.S. sanctions that were reimposed in 2018. Russia has prioritized exports to Europe. In 2021, Europe was the destination for more than half of Russian oil exports, while China accounted for less than one-third. Many European countries moved to reduce their dependence on Russian energy after the invasion of Ukraine. Russia sought new markets, including China.

Iran, with vast stores of natural gas, could, in theory, compete directly with Russia for the European gas market. But as of mid-2022, Iran lacked the necessary infrastructure to significantly boost production and exports. For years, Iran has struggled to attract foreign investment due to concerns about Western sanctions. The natural gas sector needed $80 billion in investment to hit a production target of 1.4 billion cubic meters of natural gas, Oil Minister Javad Owji said.

How have Western sanctions on Russia changed the relationship?

The Russian invasion of Ukraine triggered significant changes to Moscow’s oil export patterns. Under sanctions limiting sales to Europe, Russia has funneled most of its oil to Asia, where it directly competes with Iran. Russian oil has several advantages over Iran’s crude. Moscow has marketed the oil at a steep discount, reportedly more than $30 below the Brent benchmark, while Iran has historically offered a $10 discount. Traders and refiners face greater sanctions risk in handling Iranian crude compared with Russian oil because the latter is not subject to U.S. secondary sanctions. Finally, Russian Urals crude is similar to Iranian crude but has a lower sulfur content, making it less expensive to refine. 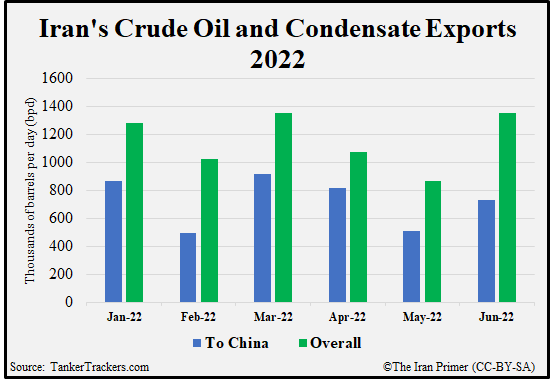 The competition with Russia may have limited how much Iran can earn from its oil exports, even as prices reached their highest levels since 2008. Pinpointing the precise impact was difficult due to volatility in oil markets, the clandestine nature of Iranian exports and pricing, and other factors that affect demand, such as the slowdown in China’s economic growth. In May 2022, TankerTrackers.com reported that Iranian crude and condensate exports to China fell more than 35 percent to about 500,000 barrels per day, although exports rebounded to more than 700,000 barrels per day in June.

Meanwhile, Chinese imports of Russian crude have increased sharply; in May 2022, China imported 55 percent more Russian oil than a year prior. The competition could build over time, especially if negotiations to revive the 2015 nuclear agreement flounder and the United States tries to exert additional economic pressure on Iran.

Competition between Iran and Russia has intensified in other areas as well. In May 2022, Iran’s union of oil, petrochemical, and gas exporters said that Russian discounts were affecting the regional market for liquified petroleum gas, which can be used for home appliances and transport. This was cutting into Iranian revenues in neighbors like Afghanistan and Pakistan. A similar dynamic emerged regarding steel, where Russia has reportedly offered steep discounts and stolen market share from Iranian steel manufacturers in countries including China, Afghanistan, South Korea, and Thailand.

To what extent have Iran and Russia coordinated to evade U.S. sanctions?

For years, the United States has accused Russia and Iran of working together to bypass Washington’s sanctions on Tehran. For example, Iran and Russia have cooperated on exporting oil to Syria, which is also under U.S. sanctions. Since the invasion of Ukraine, press reports have suggested that some Iranians are teaching Russians how to circumvent U.S. financial and trade sanctions. And both Moscow and Tehran have pledged to expand cooperation and use national currencies in trade. Iran has also floated barter arrangements – such as swapping Russian metals for Iranian car parts and gas turbines – aimed at bypassing U.S. sanctions.

Russia and Iran have not made their ambitions a secret. Moscow will work with Tehran to “take practical steps that will allow us to circumvent these illegal actions,” Russian Foreign Minister Sergei Lavrov said in a meeting with his Iranian counterpart in March 2022. Iranian President Ebrahim Raisi made similar remarks in a meeting with Russian President Vladimir Putin in June 2022. “Financial exchanges between the two countries should be in [a] framework that is independent of the Western financial system so that no country can infiltrate in it and put pressure on it,” Raisi said. But the tangible benefits for either side were not yet clear.

How important is bilateral trade to each country? What are Iran’s key exports to Russia? What are Russia’s main exports to Iran?

For most of the past three decades, bilateral trade remained relatively small and limited primarily to agricultural products. Iran exported $568 million in non-oil goods to Russia in 2021/22 (Iran’s 11th largest export destination), while it imported more than $1.6 billion of goods (Iran’s fifth largest import source), for a total of more than $2 billion, according to Iran's Trade Promotion Organization. Russia reported a larger total for trade in 2021; the Russian Federal Customs Service reported Russian exports as $3.1 billion and imports as $976 million, for more than $4 billion of trade in 2021. (Unsurprisingly, Iranian press outlets often cited the larger numbers, even though they showed that Iran was running an even larger trade deficit with Russia.) Major Russian exports to Iran included seed oils, corn, and barley, while Iranian exports to Russia were primarily fruit, nuts, cucumbers, milk, and tomatoes, according to detailed 2019 data.

Iranian and Russian officials have pledged to increase trade volumes in the coming years. In a January 2022 visit to Moscow, President Raisi said that he aimed to increase trade to $10 billion per year. In June 2022, Iran’s oil minister said that Iran planned to boost annual trade volume to $40 billion in the next year-and-a-half. Both targets appeared unrealistic, given historically modest trade volumes, economic headwinds in both countries, and the fact that Russia and Iran produce similar goods. 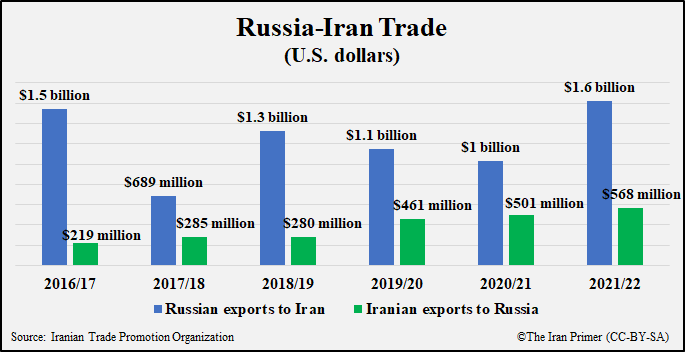 Iran and Russia have announced several initiatives to boost economic ties either bilaterally or through regional frameworks in the past year. What are the prospects for this cooperation?

The highest-profile step was the approval for Iran’s accession to the Shanghai Cooperation Organization (SCO), a regional economic and security bloc led by China and Russia. Since 2008, Iran had sought membership in SCO, which also includes India, Kazakhstan, Kyrgyzstan, Pakistan, Tajikistan, and Uzbekistan. In September 2021, Raisi made his first foreign trip as president to attend the SCO summit in Dushanbe, Tajikistan, to mark its unanimous approval of Iran’s accession (full membership will take additional time). Beyond prestige, however, membership in the organization confers limited practical benefits to Iran.

In addition, Russia and Iran were negotiating a new 20-year strategic cooperation agreement, to replace a treaty that was reached in 2001 and extended several times. While Iran's proposed revisions are not publicly known, the original treaty provided a generic framework for bilateral economic, political, and security cooperation. Iran and Russia also signed a series of agreements in May 2022 aimed at facilitating banking and energy cooperation, although no tangible progress had been announced as of July 2022.

In June 2022, Iran applied to join the BRICS group, which includes Brazil, Russia, India, China and South Africa. Prospects for increased Iranian cooperation with the BRICS financial architecture may be limited given U.S. sanctions on Tehran.

Under Raisi, who took office in August 2021, Iran has prioritized expanding ties with Central Asian countries that have historically been in Russia’s orbit. To what extent do Iranian and Russian interests in the region overlap or diverge?

Russia and Iran share strategic interests in Central Asia, such as containing security risks in Afghanistan and constraining U.S. influence in the region, as well as advancing regional economic integration. Russia and Iran are partners in major projects like the International North-South Transport Corridor, which aims to accelerate freight transport between Russia and India and could benefit Central Asian states. Russia and Iran conducted a dry run of the network in June 2022, and the corridor featured in the meeting between Raisi and Putin that month. Iran is also negotiating a free trade agreement with the Eurasian Economic Union, an economic bloc championed by Russia.