After a decade of little to no growth, Iran's economy grew modestly in 2020 and 2021, according to a new report by the World Bank. The economy began to rebound as Iran adapted to the disruptions caused by the COVID-19 pandemic and vaccinated the majority of its population in 2021. The recovery was also driven by an increase in oil and non-oil exports.

Related Material: Iran in 2021- The Economy

But the economy still faced major challenges from U.S. sanctions, which continued to limit Iran's access to foreign currency, block access to the global financial system and discourage foreign investment. The following is the executive summary of the World Bank report.

Adapting to the new normal: A protracted pandemic and ongoing sanctions

Iran’s economy is gradually recovering following a lost decade (2011–2020) of negligible economic growth. Less stringent COVID-19 restrictions, adaptation to the new normal— reflected in a recovery in consumption, and more favorable oil sector conditions have driven a four-quarter rebound after June 2020, albeit from a low base. The rebound was boosted by the rapid rollout of COVID-19 vaccines in the second half of 2021/22. However, limited accessible foreign exchange reserves, due to ongoing US sanctions, have led to exchange rate volatility and a surge in inflation. The economic rebound has also been predominantly jobless which coupled with high inflation has translated to declining household welfare, especially among the bottom income deciles who were also disproportionately impacted by the pandemic. Meanwhile, adverse climate change events such as droughts and record temperatures have led to water shortages and energy blackouts which have brought the socio-economic urgency of these challenges to the fore. 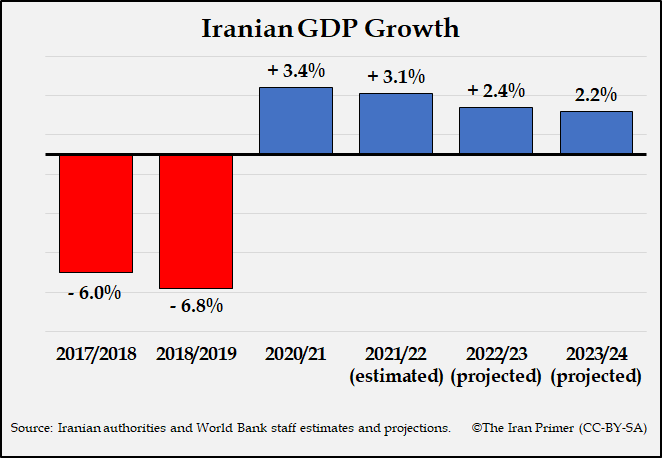 After exiting a two-year recession in 2020/21, Iran’s economy returned to some growth in 2021/22. The relaxation in cross-border trade, better oil market conditions and non-stringent COVID-19 related restrictions drove Iran’s economic rebound in the first quarter of 2021/22 which was driven by oil and services. The impact of the COVID-19 pandemic on gross domestic product (GDP) growth in 2020/21 was less pronounced compared to other countries due to less stringent COVID-19 restrictions, lower dependency on highly affected sectors such as tourism, oil recovery in the second half of 2020/21, and a relatively lower economic base after two consecutive years of economic contraction following the reimposition of US sanctions. Real GDP in 2020/21 was at the same level as a decade ago while the country forwent the demographic window of opportunity (a highly educated young population) along with a period of high oil prices (2010–2014) and unemployment remained high at around 10 percent.

The government fell short of meeting its budget targets in the first four months of 2021/22 but managed to keep the deficit close to 2020/21 (in percent of GDP). Fiscal data for Apr-Aug 2021 shows that while budget targets including for oil revenues were not met, oil revenues nonetheless expanded from their record low levels (1.1 percent of GDP) in 2020/21. However, this met only 15 percent of the budget revenue for the period. In light of these, the government adjusted expenditures which helped keep the deficit-to-GDP ratio close to the 2020/21 rate. The fiscal deficit in Apr-Aug 2021 was primarily financed through bond issuance and withdrawal from the National Development Fund of Iran (NDFI) as planned sales of asset did not materialize. Iran’s relatively low level of public debt—which is predominantly from domestic sources—provides room for further debt issuance and help buffer some of the fiscal shocks

Inflation continued to surge in 2021/22 driven by inflationary expectations and further depreciation of the rial. In the absence of an effective nominal anchor, inflation was driven by growing inflationary expectations which had been subdued after the US presidential elections and the start of nuclear talks. This trend reversed after the pause in nuclear talks in June 2021 leading inflation to rise to 43 percent year-on-year (y/y) in Apr–Nov 2021. The rial exchange rate against the dollar followed a similar trend to expectations but ultimately depreciated by 18 percent (y/y) over Apr–Nov 2021 as restricted access to foreign exchange reserves abroad limited the scope of direct interventions in the market. Government borrowing from the banking system and sales of foreign assets to the central bank also led to high money supply growth, thereby reinforcing higher prices. High inflation and the loss of real disposable incomes have worsened households’ welfare. The pandemic also severely affected jobs and incomes in many labor-intensive activities, including high-contact services and the informal sector.

The current account balance (CAB) turned positive in 2021/22 as a surge in both oil and nonoil exports outweighed the increase in imports. The recovery after the pandemic led to a sharp increase in oil and non-oil exports by 125 and 69 percent in Apr– Jun 2021 (y/y), respectively. This led the CAB to register a surplus for the first time since the pandemic despite imports also growing by 42 percent during the same period. Other sources of external financing, namely foreign direct investment and portfolio investments also remained muted due to US financial sanctions, high inflation, and exchange rate volatility.

Iran’s economic outlook is affected by the COVID-19 pandemic and the demand prospects from key export partners. Domestically, the initial slow response with regards to COVID-19 immunization in the face of the large Delta variant wave is expected to dampen growth due to the scarring effects of the pandemic and lingering threat of future waves of infection. Stricter COVID-19 containment measures aimed to contain the spread alongside shortfalls in attracting new investment, due to negative real interest rates, will be additional headwinds to growth in the outlook. Globally, slower growth in major trade partners such as China, together with ongoing US sanctions on exports is also projected to weigh down on growth in both oil and non-oil sectors. As such, average GDP growth is projected to be modest, at under 3 percent per annum, in the medium term.

Major risks to Iran’s economic outlook relate to the course of the pandemic and the prospects of geopolitical developments. The emergence of more infectious and deadly new variants of COVID-19 and subsequent containment measures would pose a significant risk to the recovery in Iran’s economy until full vaccination of a large share of the population is achieved. Trade disruptions and weaker demand from neighboring countries such as Afghanistan and Iraq, the main source of accessible foreign exchange reserves, would also prove as a major headwind for growth and financing imports. The economy also remains vulnerable, albeit less than in the past, to future downturns in global oil prices. The mounting climate change challenges resulting in more severe water and energy shortages together with high inflation could further increase pressures on the most vulnerable and add to social grievances. Upside risks relate to the possibility of sanctions relief which could boost economic activity, as the economy has chronically operated below potential capacity.