On January 9, Supreme Leader Ayatollah Ali Khamenei said that Iran could negotiate with its enemies but would not give into coercion. “We have never surrendered so far, and we never will,” he vowed in a televised speech commemorating the anniversary of an uprising against the monarchy in the holy city of Qom in 1978.

Khamenei did not directly reference the ongoing negotiations in Vienna on restoring the 2015 nuclear deal. Since April 2021, Iran and the world’s major powers have held eight rounds of talks to return the United States and Iran to full compliance with the agreement. The logistics were unusual because Iran refused to meet directly with the U.S. delegation. 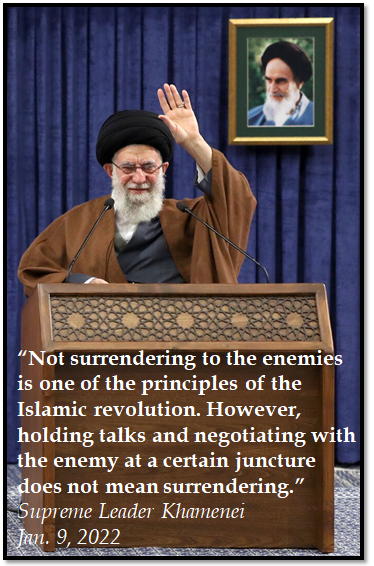 In his address, Khamenei said that the United States had miscalculated the impact of its assassination of General Qassem Soleimani, the commander of Iran’s elite Qods Force who as killed in a drone strike in January 2020. “In the enemy’s thinking, the martyrdom of General Soleimani was supposed to be a threat to us,” Khamenei said. “However, the Muslim Iranian nation turned this threat into an opportunity.” He claimed that the resistance network of Iran’s allies opposed to the United States, Israel, and others was stronger two years after Soleimani’s death.

Khamenei also alleged that Iran’s enemies were waging a “soft war” in cyber space and foreign media to weaken the public’s commitment to the principles of the 1979 Islamic revolution. He urged Iranians to maintain their religious zeal and be vigilant against attempts to sow discord among ethnic and religious groups. “Shiites and Sunni people have lived together in the country for centuries… and had no problems,” he said.

Khamenei, however, acknowledged past conflicts between ethnic groups. Persians are Iran’s largest ethnic group, but nearly a dozen other groups – including Azeris, Kurds, Arabs and Baluchis – represent well over a third of the 85 million population. Activists from minority groups have long accused the central government, dominated by Persians, of discrimination. The following are excerpts from Khamenei’s speech organized by topic.

“Such miscalculations by the United States (referring to President Jimmy Carter’s description of Iran as an ”island of stability” in 1977) are still going on. An example of this is the martyrdom of Martyr Soleimani. In the enemy’s thinking, the martyrdom of General Soleimani was supposed to be a threat to us. However, the Muslim Iranian nation turned this threat into an opportunity. Not only was the Resistance Movement not extinguished, it has also increased as you can see.”

“Enormous, amazing funerals were held for Martyr Soleimani in various cities of Iran and Iraq, and God blessed these. If they were to hold funerals for him in Syria, Lebanon and Pakistan, they would have been just as enormous.”

“The U.S. system of calculation is defective. It cannot fathom the truths about Iran. When their calculation of the existing situation is wrong, their decisions are wrong too. This is why they have been unsuccessful so far and they will continue to be unsuccessful, God willing.”

“At this time in history, it is the martyrdom of Martyr Soleimani that is a truly historic and strange tragedy. No one thought, not even the friends, that this event would turn into such a momentous event and that God, the Almighty, would bestow such greatness on it. God revealed the true identity of the people to everyone. The Iranian nation showed its identity and unity as they were carrying the coffin of Martyr Soleimani.”

“The U.S.’s deep hostility and spite toward Iran stems from the Iranian people’s revolutionary, religious viewpoint on the current issues of the world. That is why the U.S., the leading Arrogant Power, opposes the Islamic Republic of Iran.”

“The Islamic Republic and the Islamic Revolution were formed in order to bring about the rule of the religion of God. People gave their lives and sacrificed their blood to make this happen. This is one of the principles of the Revolution, and [the enemies] seek to weaken this.”

“Not surrendering to the enemies is one of the principles of the Islamic revolution. However, holding talks and negotiating with the enemy at a certain juncture does not mean surrendering. We have never surrendered so far, and we never will.”

“It is another thing to negotiate, talk and interact with the enemy, but we have not and will not give in to the enemy's coercion and words. They want to undermine this and they want to downplay these salient principles. This is part of the extensive, diverse soft war of the enemy that they are pursuing.”

“We should not let these things [societal divisions] happen or increase in the country. Well, Shiites and Sunni people have lived together in the country for centuries. They have lived [together] for years and had no problems. We sometimes had ethnic differences. We had conflicts between different ethnic groups, different ethnicities. [But,] we did not have conflicts and differences between the Shiites and the Sunnis.”

On Preserving the Revolution

“It is religious zeal that turns threats into opportunities. An example of this is the eight-year [Sacred] Defense in which the religious zeal of the youth, fathers, mothers, sisters and wives led the youth go to the front and be victorious in this international war in which they [the enemies] all collaborated together to defeat the Imam and the movement.”